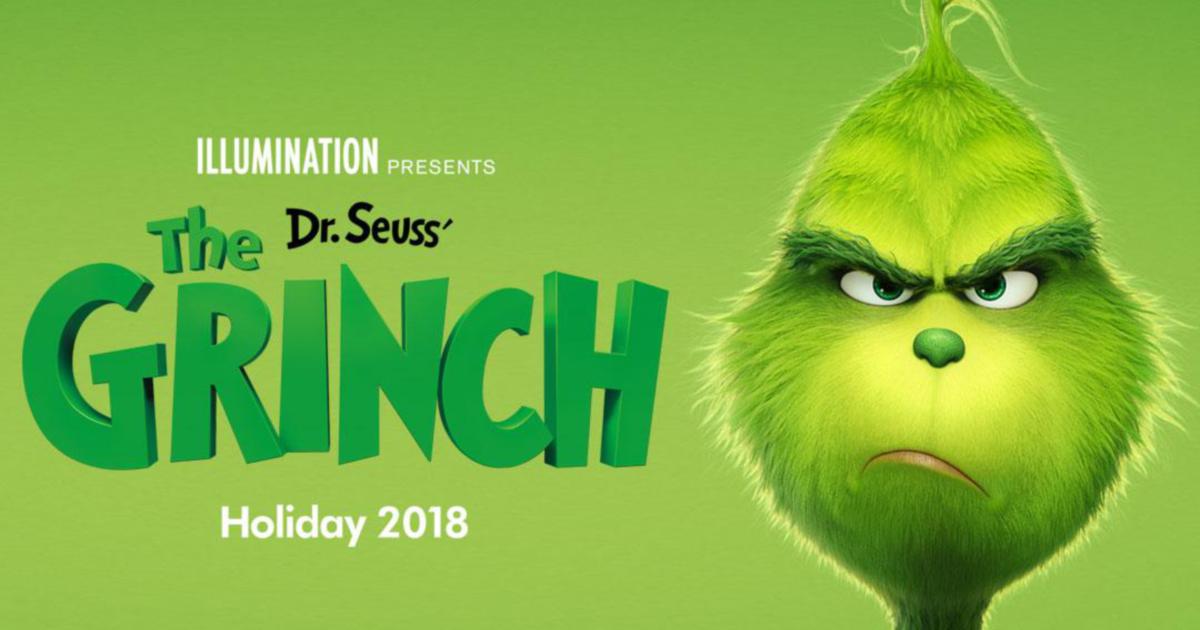 Commercialism and name recognition exist, so we were bound to get another Grinch-centric movie at some point after Ron Howard‘s How the Grinch Stole Christmas slowly faded away from the collective memory of the casual moviegoer. (It has certainly NOT disappeared from my mind — Jim Carrey’s creepy Grinch face still haunts my dreams.) Now we have The Grinch from Illumination and it…exists.

Written By: Michael LeSieur, Tommy Swerdlow, and Dr. Seuss (based on the book by)

The Grinch (Cumberbatch) loathes Whoville, a town full of overly nice, Christmas-loving Whos. And as the Christmas celebrations get bigger and brighter every year, the Grinch becomes increasingly infuriated. It becomes clear that there is only one way for him to get some piece and quiet: he must get rid of Christmas once and for all. He quickly hatches a plan with the help of his dog Max to bring his dream to life.

Meanwhile, in Whoville, Cindy-Lou Who hatches a plan of her own to catch Santa Claus so that she can ask him to help her overworked single mother.

But who am I kidding, you know this story and Illumination’s The Grinch does very little to distinguish itself from the classic animated tale.

After their meteoric rise to serious profitability following Despicable Me, Illumination has been on a slippery slope towards pandering to general audiences. By every statistic that measures and consolidates critics’ scores of films, it’s all been downhill since the first time we heard a yellow blob shout “banana.”

But quite contrary to their critical reception, the popularity of Illumination has only improved since their start, peaking with Minions making a whopping $1.159 billion at the box office, followed closely by Despicable Me 3 which also broke through the $1 billion threshold. They’ve come a long way since Hop. (Remember Hop? No? That sounds about right.)

Personally, it feels like Illumination is far more concerned with turning a profit than it is with creating quality films AND turning a profit simultaneously. The result has been plenty of broad, slapstick animated films with heavy dose of pandering. And by featuring a remix to “You’re a Mean One, Mr. Grinch” from Tyler the Creator with narration by Pharrell, The Grinch is a continuation of the trend.

Another cute sidekick animal in an animated film. How inventive! Image via IMDb

As Bland as Bland Could Be

With The Grinch Illumination is so concerned with creating family friendly entertainment that all its edges are completely smoothed down. Benedict Cumberbatch is having some fun talking in a broad American accent, but his character simply doesn’t have any mischievous charm. Realistically, he’s not even that mean as he quickly bonds with his dog sidekick Max to form a fairly cute yet generic relationship that shows very early on that he’s able to feel compassion.

In reality there isn’t much to this movie at all. It plays to the cheap seats at every opportunity, begging the crowd to like it with the least offensive material imaginable. If I’m being honest, the contents of the film quickly started to fade from my memory as soon as I left the theater. Funny enough, The Grinch is one of the toughest films of 2018 to discuss in a review, not some other movie that requires much intellectual thought. You know this story already. It’s merely updated for a modern audience, meaning that its contents are simply watered down with the studio hoping that obnoxious popcorn munchers get a few hearty chuckles. I don’t have much to say!

Stick to the Classic Cartoon

Admittedly, there are glimmers of new story threads in The Grinch. As mentioned previously, one hints at a bit of a tortured past for the Grinch that explains his loathsome ways with another diving into Cindy-Lou Who’s desire to help her mother. In theory both of these ideas could make for charming holiday fun. The keywords in that sentence are “in theory,” as The Grinch doesn’t offer enough time to either piece for them to carry much emotional weight. Instead we get an extended quest in search of a reindeer that includes that insufferable goat yell that was all the rage in meme culture approximately six years ago:

You just couldn’t help yourself, could you, movie?

The original 1966 How the Grinch Stole Christmas! is 26 minutes long. The official runtime of The Grinch is 86 minutes. Writers Michael LeSieur and Tommy Swerdlow were tasked with padding out the cartoon with an extra 60 minutes of material. With how the film turned out, I think it’s time we put the idea of a Grinch movie to rest. There simply isn’t enough material to tell this story conventionally. Especially with a studio hellbent on remaining 100% clean and family friendly.

In short, this is a nothing movie.

In long, The Grinch is so unbelievably, non-miraculously competent that never gets close to eliciting a strong response from the viewer — whether that’s strong hatred or strong affection — leaving everyone in a substantial state of indifference.

This picture describes my thoughts about this film perfectly. Image via Variety

While this movie will go on to make gobs of money at the box office, it’s a sign that we should stop trying to make the story of the Grinch into a feature-length film. There simply isn’t enough material to make it a worthy experience.

The Grinch is the story you know with limited variation. What variation it has falls into two categories: unrealized potential and needless fluff (with an emphasis on the needless fluff). The film is competent enough that I cannot lambast it for any real reason other than my disdain for the film’s marketing campaign. But pure competence isn’t worth your $15 for a movie ticket, or whatever tickets are worth now as prices continue to inflate at an extremely high rate.

Psst…Hey Max, we should’ve made a better movie. Image via Roger Ebert

Thank you for reading! What are your thoughts on The Grinch? Comment down below!

I liked it, more than I thought I would. I’m a huge fan of the original 1966 TV special, so I was glad it was sort of a reimagining of the plot of that.

Maybe because it was animated, I got into it more. I couldn’t tolerate the Jim Carrey live-action version.

We’re definitely in agreement that it was better than the Jim Carrey version (I still have nightmares), but obviously I didn’t really get much out of it. I’m glad you liked it more than I did! 😁

I wish Cumberbatch had kept his British accent.

It would’ve made it a little more sinister, that’s for sure! Although I do kinda like hearing him get outside of his comfort zone.

I haven’t seen this, but loved Cumberbatch’s take on the voice, although the movie itself looked terrible. It seemed like a senseless cash grab with no imagination, and it looks like that’s exactly what it ended up being. Nice review!

Yup!!! You have a complete understanding of what it is! Thanks for your kind words 😁

The first feature film gave him a sad, tortured past too. Honestly, “his heart was two sizes too small” is all the backstory we need.

And that backstory only works for a TV special, not a feature-length film. Ugh, Hollywood!

There’s no point to this movie other than money. It’s just sad.

EXACTLY! We all know that the industry is a balance between art and profitability, but at least make it look like you made an attempt to have that balance!

I just remember being so bored out of my skull while watching it. The animation may be great but the film has to do something compelling enough with it.

It was the longest 86 minutes I can remember!