This weekend’s counter programming to Blade Runner 2049 is the survival film The Mountain Between Us starring Idris Elba and Kate Winslet.  After crash landing on top of the snowy mountains somewhere in the Midwest, these two must fight for their survival…and their feelings (it’s about as groan-inducing as you would think).  The following review will be spoiler free. 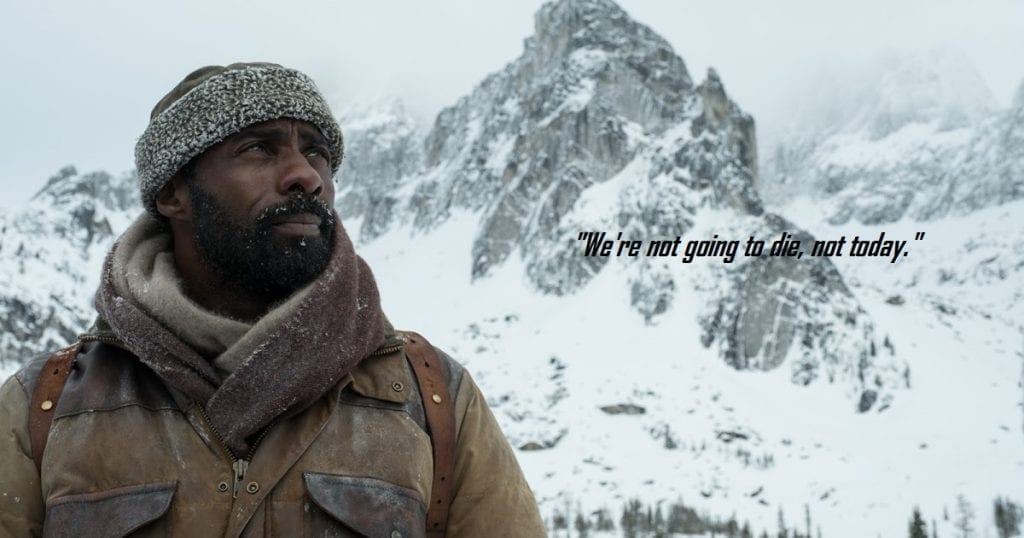 The Mountain Between Us is directed by Hany Abu-Assad and stars the previously mentioned Idris Elba and Kate Winslet.

Ben (Elba) and Alex (Winslet) are seemingly out of luck when their flights at a local airport are cancelled.  However, the two find a pilot that can take the two of them to their desired location.  Unfortunately, their flight crashes, leaving the two of them stranded up on top of snowy mountains with limited resources.  Injured, the two must travel down the mountain to seek shelter and survive.  All the while, Ben and Alex develop a relationship which stands to affect their lives in unforeseen ways.

As with any major Hollywood studio production, there were some other high profile actors in line to play the lead roles in the film before Idris Elba and Kate Winslet.  Back in 2012, Michael Fassbender signed on to play the leading man, but later dropped out due to scheduling conflicts.  Charlie Hunnam would later take his place with Margot Robbie set to join the film as his co-star.  As you know by the end result of the film, these two dropped out to pursue other opportunities.

In stepped Idris Elba and Kate Winslet, two actors that are noticeably older than the other casting choices.  Those involved with the project wanted to shuffle things up a tad after circulating in development hell for a few years.  This change was cemented once director Hany Abu-Assad came onboard to helm the film.  As a relatively unknown director, Abu-Assad hoped that The Mountain Between Us would be his big break in the industry.

Just from a glance, it seemed like The Mountain Between Us had everything in place to position itself for an awards run.  You have two great leads, a hungry director who’s been successful in indie movies, and material based off of a popular book.  In essence, the film has all the things that the Academy pays attention to in a film.

It appears that 20th Century Fox ended up getting the casting correct for the film as Idris Elba shines next to Kate Winslet.  The man literally does everything for the film, metaphorically carrying it on his shoulders while literally carrying an injured Kate Winslet in the film through snowy landscapes.  Elba has always been known to be suave and manly which, of course, he is.  However, The Mountain Between Us requires him to be very understated and calm.  It’s a nice change since he predominantly plays a grizzled, macho man that towers over everyone else.

Obviously, The Mountain Between Us focuses mostly on just Idris Elba and Kate Winslet (and also a dog).  For the film to work at a baseline level, these performances need to be great.  Winslet is her typical solid self, but Elba powers the film to become quite engaging when its inherently flawed script doesn’t get in the way.

A Less than Stellar Relationship Sinks the Film

The Mountain Between Us attempts to balance its core survival story with a romance element.  It’s here where the film truly falters.  There’s a serious juggling act going on here between the two tones.  What you end up getting is a survival story that doesn’t have nearly the grit that it should that’s mixed with a relationship that isn’t believable enough to warrant certain actions in the film.

Hany Abu-Assad doesn’t allow either aspect to become fully realized.  Our main characters never feel like they’re in too much danger.  They find shelter quickly and travel days without food and maintain their strength.  You never get the feeling that Elba and Winslet are on the verge of dying, even if the movie wants you to think so.

The relationship that grows can best be described as “misplaced.”  I guess I should have known what I was getting into since the title of the movie sounds like a Lifetime special.  However, it grows in the most illogical of ways.  There’s an attempt to inject sappy back stories into the drama to heighten the relationship’s intensity.  But, you just sit there and wonder why they’re wasting time on melodrama when they could work towards getting rescued.

There’s a cold, calculated rhythm to this film that we’ve all seen countless times before.  Strangers who are stranded together intially bicker about their situation.  Then they apologize.  Then become close.  After that, well, you get the idea.

Slow Pacing Will Have You Squirming in Your Seat

The Mountain Between Us also suffers from what I like to call “Return of the King syndrome.”  Putting it politely, the movie has countless fake endings that drag out the third act, only in this case you don’t really have a rooting interest in the matter, making the last ten minutes feel like another hour.  There’s a sense that the creative team felt like moviegoers wanted complete closure to the story.  In fact, it goes to great lengths to make sure every loose end is patched up.  Good for you movie for trying to have a cohesive story, but I checked out about twenty minutes before you got to this point.

If that weren’t bad enough, the film ends in one the cheesiest final frames of the year, accenting what is a hollow, Oscar-baity movie.

The Mountain Between Us looks pretty and has great performances, but those qualities can’t compensate for a flawed script and unimaginitive execution.  This film is most certainly the first of many Oscar-bait films that are to be released in the coming months.  The problem with shooting for awards, however, is that if you don’t make a quality movie, it’ll fade off into nothingness almost instantly.  I foresee The Mountain Between Us succumbing to this fate.  It gets a C-.

Sorry Idris, but you’ll have to wait a little longer to get that Oscar.

Thanks for reading!  What are your thoughts on The Mountain Between Us?  Comment down below!

Want to write for MovieBabble? Head to the following link on your desktop to sumbit an application: https://moviebabble971852905.wpcomstaging.com/join-moviebabble/