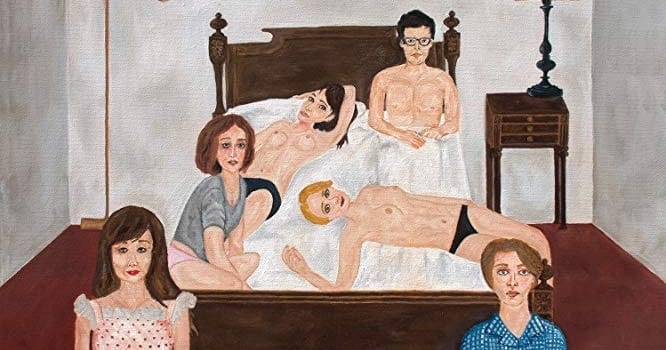 If you received an email titled “NEWLY SINGLE for MovieBabble?”, what would you think? Personally, I thought that MovieBabble had been taken over and was now a spam dating website, but then I read the actual email. Turns out that Newly Single is the title of a soon to be released indie movie, and on top of that, it is exuberantly charming.

The following review will be spoiler free:

Newly Single follows Astor Williams Stevenson (Clark) in the wake of the devastating end of a three-year relationship. As the relationship ends, Astor heads to the bars of Los Angeles to re-enter the dating pool. Astor finds success, failure, and pain as he tries to relearn relationships.

As Astor finds himself in romantic company of many women, he struggles with his prior feelings and inner demons. Meanwhile, Astor is faced with a plethora of challenges that stem from being an indie director early in his career. As Astor attempts to balance these issues, he is forced to confront many of the issues that lie within himself.

What stands out about this film, much like most indie films, is its charm. Indie films traditionally aren’t as concerned with mimicking certain styles or tones, and are therefore able to better express themselves.  Newly Single is no exception to this. Director Adam Christian Clark’s personality exudes from every scene. However, this also results in some of the film’s greater flaws. Clark acts as Writer, Director, Actor, and basis of this film. Throughout the film it feels as if he is too involved in his own story to tell it to anyone other than himself.

This problem often plagues indie projects, with the most notable example being Tommy Wiseau’s The Room (though there is absolutely NO comparison in the quality of these two). While the core contents and ideas of a story may be sound and interesting, they can become too bogged down in the input of one man. Filmmaking is a collaborative process, and the lack of cooperation is palpable in Newly Single. Many of Clark’s ideas don’t come across as directly to an outsider as they should, and the film faces clunky pacing as a result of this.

Newly Single feels very clunky. The main plot, revolving around Astor and his relationship failures, comes with two main subplots. The first revolves around his failed relationship with his ex-girlfriend, Valerie. The second, based on real life experience of Clark, focuses on the troubles had directing the character’s second Indie film. One of these plots ties in really well with the story and gives Clark’s character greater depth. The second does not. Care to guess which is which?

While I applaud Clark for writing what he knows, the subplot of his second Indie film fails to bring much fruition to his character development. Rather, Astor’s role as director feels more like coincidental filler than it does anything with stakes. The movie skips around this subplot a few times, but I often kept forgetting that the character was in the midst of directing a film. The focus of this movie is relationships, dating, and self-inflicted wounds of love. The film works much better when it is striking its romantic notes. Sadly, it does not divert enough time to hitting these notes to their full potential.

Some of the directorial decisions in Newly Single are unique, some are charming, and a great few are jarring. As far as design and style goes, this looks and feels like what you’d expect from an indie film. And, while Clark’s total involvement detracts from the narrative, it fills this film with heart and charm. However, the ways and means by which some of the more pertinent moments of character development are delivered point to over indulgence on behalf of the director.

The biggest head-scratching directorial decision in this film is the sex, and boy are there a lot of sex scenes. This is fine, I don’t have a problem with writers and directors using sex scenes, so long as they seem like the best choice for the moment. However, the sheer run-time of this film that is sex scenes is astounding. The scenes are meant to highlight Astor’s flaws as an individual and the struggles of being newly single in LA. In actuality, these scenes rush over his character flaws by focusing too much on the sex, rather than the actions or motives behind it.

These sex scenes feel like they have as much reason behind them as the climactic fight scene in Suicide Squad. The characters are assembled and they fight because that’s what the story calls for them to do, not because of any growth or genuine motivation. The sex in Newly Single comes off the same way. It feels almost as if the director just wanted to film himself having sex and so decided to write this movie around that premise. Thinly written characters are thrown in and thrown out to give Astor a quick one night stand without ever really rounding out themselves or Astor in the process.

As a huge fan of the cult classic,  Wet Hot American Summer, I was excited to see Marguerite Moreau‘s name pop up in the trailer for this movie. The film spawned the careers of many a talented actor/actress and Moreau is no exception. That being said, she was clearly thrown into this movie to give it a little bit of star power. Her character, Valerie’s sister, doesn’t appear until near the film’s climax. And, once she appears, she’s merely used for a few piercing lines into Astor’s character before she, and the Valerie subplot fade to black.

Moreau does a great job with the material she is given, but her presence merely thins out the character of Valerie and softens what is set up to be the primary conflict of the film.

Before I slap a grade on this and get along with my weekend, I want to take a minute to talk about indie filmmaking.

Yes, it may appear that I have bagged on this movie a lot. Truthfully, I have, but I still support it. Why?

Adam Christian Clark poured his heart and soul into this film. That is apparent from opening shot to closing credits. Whether this is the best movie ever made or the worst movie ever made, that should be applauded. Indie film-making exists in many different forms among many different people across the country. These filmmakers are making bold strokes in the medium and are delivering some terrific stories, many of which they won’t make a dime off of. These filmmakers are literally putting their lives into these films just to connect with an audience and tell them something either moving or entertaining. So, applaud them for it. Support them. Go to your local film festival for an afternoon and let someone know that their input into society is seen and appreciated. Who knows? Ryan Coogler and Greta Gerwig both got started in Indie films, your local director could be next.

Newly Single is first and foremost a charming passion project. Director Adam Christian Clark’s heart and soul can be felt with every beat. However, the film suffers from too much of that passion going unrestrained and as a result faces some major missteps in the areas of character development and narrative flow. You may or may not like it, but it’s not a terrible way to spend an hour and a half supporting an indie filmmaker.

Thank you for reading! What are you thoughts on Newly Single? Comment down below!