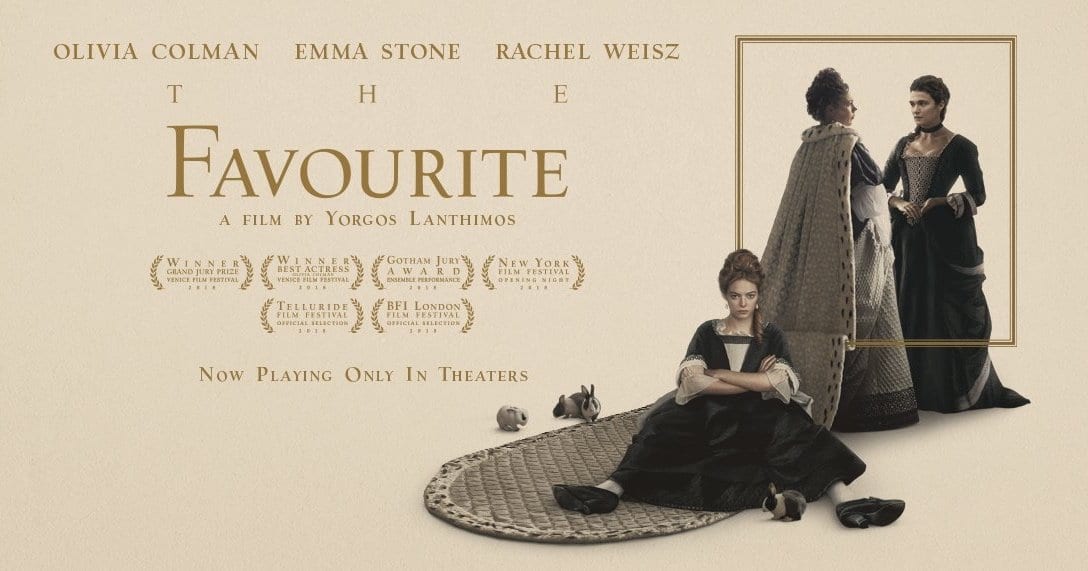 This review will be spoiler free.

In England in the early 18th century, Queen Anne (Olivia Colman) sits on the throne. But life is not all sunshine and roses. The Queen is temperamental, emotionally unstable at certain moments and dealing with health issues. Though Anne sits on the throne, her best friend, Sarah Churchill, Duchess of Marlborough (Rachel Weisz) is the power behind the throne.

Enter Abigail (Emma Stone). Abigail is from the same aristocratic family as Sarah, but Abigail’s branch of the family no longer has the status and the power that it once did.

Abigail asks her cousin to help her get a job in hopes of re-elevating the family status. Recognizing that Abigail is intelligent and has charm to spare, Sarah elevates Abigail’s status within the royal household. But while Sarah is preoccupied with business of running the country, Abigail sees an opportunity to get into Anne’s good graces and fill the emotional hole left by Sarah. This new relationship opens the door to power that Abigail will do anything (and perhaps anyone) to hang onto.

The Favourite is a great example of how many independent films are produced in the 21st century. Sometimes, it’s a painfully long process.

After locking up the screenplay back in 2007 — which had been written as early as 1998 by Deborah Davis — Fox Searchlight then went on a lengthy journey through development, eventually getting Emma Stone to sign on back in 2012. Stone secured the part before she had ever read the script to La La Land. As you might expect, that award-winning film stalled The Favourite once again.

But thankfully, Yorgos Lanthimos had signed on to direct the project back in 2013, and he began working closely with writers Deborah Davis and Tony McNamara to fine-tune the script for when they could finally shoot the film. But even when they were able to shoot, they had a very limited amount of time, starting principal photography in March of 2017 and finishing in May of the same year. In order to save precious time and funds, all the costumes for the film were created with plastic, vinyl, and leather by a 3-D printer.

But in the end, it was all worth as The Favourite is one of the best movies of 2018.

Politics have always been a dirty game. Who has power, who wants power, who will do anything to get or stay in power has been a question that has been answered countless times over the course of human history. For most of human history, men have played this game and answered this question. Very few women have not only entered the realm of politics, but have rarely played the game as dirty as men have. In The Favourite, the main female characters play a game of dirty politics, but do so in a way that only women can.

Fans of the BPD (British Period Drama) genre have come to expect a certain narrative. It’s usually some variation of the boy meets girl, boy gets girl story with some drama and some complications in between to make the narrative interesting. But that has been done to death. The Favourite throws that expected story out the window. Instead of romance, there is political drama and intrigue. Instead of the standard love triangle with the female in the center and her male suitors at each end is a Queen at the center with two women at each end who see her as a vehicle to cement their own status within the country’s political framework.

Colman’s Queen Anne is not exactly of sound mind. Both Weisz’s Sarah and Stone’s Abigail use this to their advantage, playing a game that is more akin to Mean Girls rather than the imprisonment and execution style that has been used by men who rule due to an accident of birth.

Emma Stone Steps Out Of Her Career Comfort Zone

Emma Stone’s career track has been steady growing for the last 8-10 years. Roles in Zombieland, Crazy, Stupid, Love, and The Help made her a household name. With The Favourite, she steps out of her comfort zone by not only playing a character from another time period, but with another accent. When an American actor plays a character from the other side of the pond (especially if the film is set in another time period), it is sometimes debatable if this actor is believable in the role that they are playing. As Abigail, Stone makes the audience forget that she is an American actor playing a British woman in the early 18th century. Fitting in perfectly with Colman and Weisz, her Abigail is crafty and cunning, quickly learning the rules of the game of politics and playing them deftly.

While The Favourite appears to be a niche film that will appeal to small segment of the movie going public, it is really a film that appeals to a much larger audience. Sex, politics and the grab or the maintenance of political power are topics that are as old are as human history. The film adds to these very basic themes by telling the story of two women who are vying for power and using a Queen to get that power instead of men vying for power from a King. The film is enjoyable because it has not only has narratives that audiences are used to seeing, but it also adds new elements that make the story fresh, interesting and forever timely.

Thank you for reading! What are your thoughts on The Favourite?  Comment down below!

Acting, writing, visuals, all excellent. This is a movie that keeps you riveted to the end…And speaking of the end… can someone please tell what the hell that last image meant?
Totally ruined the movie for me.

Wow! Is this the first A+ I’ve seen on here? I’ll have to see this! Emma Stone is the best actress of the 21st century and I wanted to see it just for her, but…wow.

This movie looks great & I love how it’s about women in power & gaining power instead of men.

Looking forward to seeing this one :)