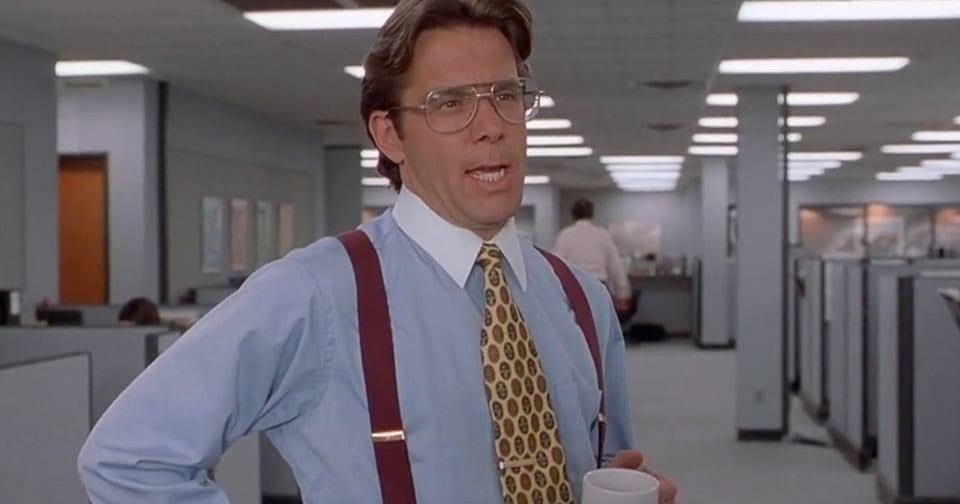 Have you ever worked in an office? Then Office Space is a film about your life. The technology may be twenty years out of date, cubicles may be replaced with open plan offices, but still: you will know these people and these situations.

Our hero is Peter, played by Ron Livingston, who works as a programmer at an ineptly run company called Initech. We learn he answers to eight different bosses, one of the many inefficiencies about the company. The supervisor who is most present and irritating is the obnoxious Bill Lumbergh, played expertly by the always marvellous Gary Cole. Peter hates his job but feels stuck and helpless. His girlfriend takes him to see a hypnotherapist, who tells Peter he is very happy and relaxed while under hypnosis. Problems arise when the hypnotherapist has a heart attack while Peter is still under hypnosis, leaving him happy, relaxed, and carefree. Peter then acts on his new-found careless attitude in various unconventional ways, with often hilarious results. 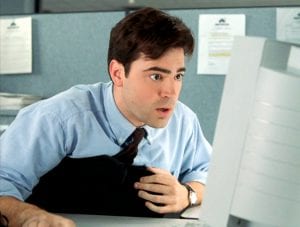 We’ve All Been There

But the beauty of Office Space is not in its plot, which is virtually incidental. It is in the way in which it sets up various situations in order to make fun of office culture and working life in general.

The film opens with the morning commute. Peter is in his car, inching forward, bumper to bumper with other cars. He notices the next lane cars are moving along freely, so he changes lanes. The moment he does so, the lane he has moved into comes to a halt, while the lane he left starts to move. So, he changes lanes again, only to once again come to a stop while the lane he just left starts to move. To highlight the ludicrousness of the situation, he notices an old person with a walker on the footpath who is moving faster than the traffic. Haven’t we all been there? (Incidentally, this is also true of queues at supermarket check-outs.)

The Saga of the Perpetually Jamming Printer

In my very first job (which is older than this movie) we had a photocopier that was constantly jamming. It would helpfully tell you where it was jamming, just to make it easier to fix. However, you would look in the area where the paper jam was alleged to have occurred, and you would find…nothing. After fruitlessly opening and closing all the several thousand little doors on the machine for some minutes, it would suddenly announce that all was well…and jam again five minutes later. Consequently, the various scenes involving, and the eventual demise of the offending machine in Office Space is beautifully cathartic for me. Malfunctioning equipment is one of the most stressful aspects of working life. We’ve all been there. I give you three men, one printer, and a baseball bat.

We’ve All Met Her

“Someone’s got a case of the Mondays!” she chirps cheerily, and leaves, while Peter and his equally disgruntled colleagues look sourly after her. Have you met her? I’ve met her. There’s one of her in nearly every workplace in the world (clones, maybe?) Always sunny, always a smile, even when smiling is completely contra-indicated. And if you should commit the heinous offence of not being equally as chirpy and cheery, she will respond with a smiling display of passive-aggression, such as the above comment or similar ones. (“Turn that frown upside down”, “smile, it might not happen”, etc.)

We’ve All Worked for Him

Gary Cole breathes oily and annoying life into boss Bill Lumbergh. He appears when least wanted, perpetually slurping from a coffee cup, and wearing loud braces and an equally loud tie. “What’s happening?” is how the interaction always starts, not that he wants to know, because he never listens to a word said to him by any employee. He then proceeds with criticism or unreasonable demands (such as asking Peter to work all weekend). He always ends with “That’d be great,” followed by “Mmmkay?” before slithering away to his next victim. Cole is fantastic in this role and turns Lumbergh into a character we love to hate, and possibly slap. 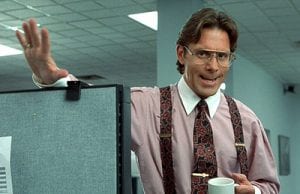 But What if You Just Didn’t Care?

“I don’t like my job,” says Peter, “and I don’t think I’m going to go any more.” Peter discovers the freedom of not giving a damn, and doesn’t show up to work. The company has hired consultants (Bob and Bob) to downsize their staff, and Peter ends up talking to them when he comes into the office to get some personal property. They ask him how he spends his day, and he tells them he does very little because he is not motivated to do anything. He explains the inefficiency and time-wasting of his job. He then leaves the building, involving a fun moment where Lumbergh tries to intercept him and Peter just walks around him.

By not caring about how he is perceived, he gives the two Bobs the impression that he has ‘upper management written all over him.’ This is a clear indicator of how out of touch with reality the corporation people are. It’s also the only scene where Lumbergh shows any genuine emotion (astonishment).

image via The Viewer’s Commentary

Stephen Root portrays the idiosyncratic Milton. What does Milton do? This is unclear, though the same could be said for a lot of the characters. We know he is obsessively attached to his red stapler (which Lumbergh maliciously steals at one point). He was supposedly laid off a few years previously, but no one processed the termination or told him he’d been fired. He is constantly being told to move his desk by management.

Milton is consistently either belittled or ignored. The only character who is ever remotely nice to him is Peter himself. We do learn Milton is as frustrated as everyone else at the company and mutters on several occasions threats to burn the place down. The business decides to get rid of him by simply not paying him, and still no one will tell him he’s been fired. (I don’t know if this kind of thing is illegal in America, though I would hope so.) But Milton has the last laugh, as he sneaks away with an unexpected windfall while the building does burn down. (And hey, we never see him light the fire.)

Office Space is funny, satirical, and supremely therapeutic, and I’ve barely scratched the surface of its many wonderful situations and characters. Workers of the world unite! Watch Office Space and know that you are not alone.

Thank you for reading! What are your thoughts on Office Space? Comment down below!

Office Space absolutely nailed the corporate culture. Having been in Corp America for 30-ish years, I totally get the soul sucking nature of the corporate monster…. Interestingly that the movie Office Space was not well received at the box office when it first came out – but has become a cult classic with the corporate america minions. Some the actors stated they never had even worked in an actual office however they certainly captured the essence of CA life!!

I feel like every workplace has its own “Office Space” tinge to it. That’s why shows like Superstore and The Office are super funny today. I can see nearly every person in this comedy at my workspaces.

Every time I catch myself at work saying, “If you could do X, that’d be greeeeat,” I cringe. God help me, I say it. I really do say it.

Root adds wonderful dimensions to whenever he appears in a movie (like Buster Scroggs). After Office Space came out, we all went around muttering about our missing red staplers.

Rewatching ‘Indecent Proposal’ in Light of the Remake

The Best Times to Use the Clip of...