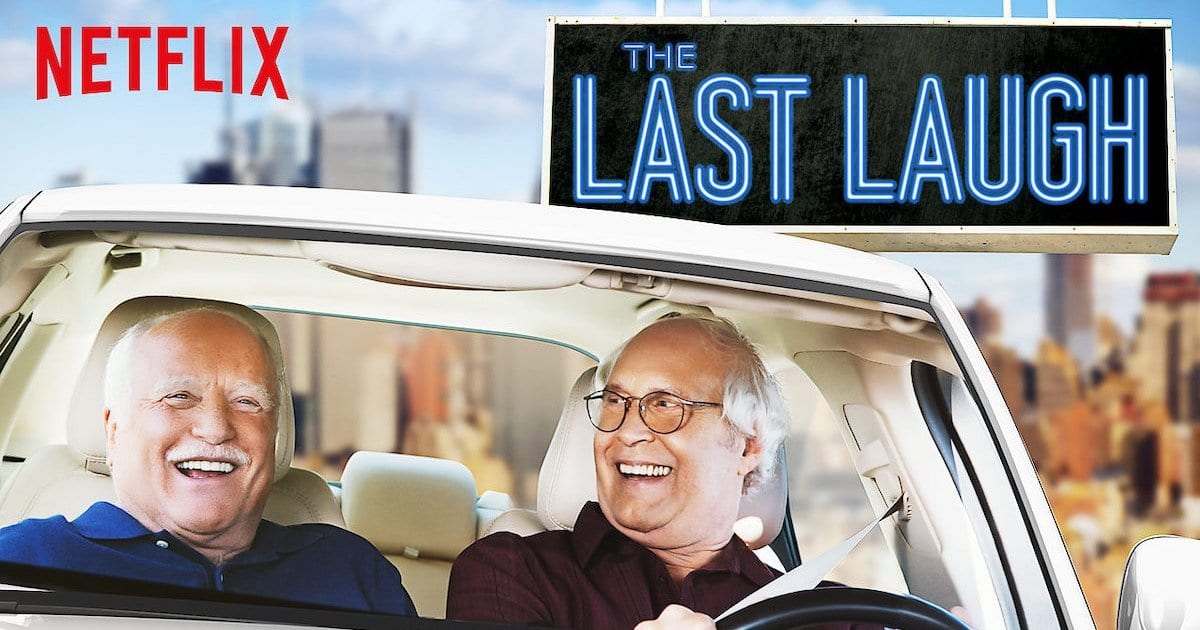 There’s been a slew of films about “old men seeking to relive their glory days” that it’s almost become a sub-genre in of itself. Sometimes this can lead into a meaningful piece of cinema (such as Venus starring the late great Peter O’ Toole or Nebraska starring Bruce Dern); other times into something undeniably charming (such as The Bucket List starring Jack Nicholson and Morgan Freeman); but it can also lead into something rather embarrassing (such as Last Vegas starring Robert De Niro, Kevin Kline, Michael Douglas and Morgan Freeman).The problem with many of these films is that they relies too much on the charms of the cast instead of working on a great script.

The Last Laugh stars two senior legends Chevy Chase and Richard Dreyfuss as two old geezers who decide to travel America, chasing their former dreams instead of wasting away in an old folks’ home. So in this particular sub-genre, where does The Last Laugh fit into the hierarchy?

Al Hart (Chevy Chase) is a retired manager who spends most of his days falling asleep on his chair. His caring granddaughter Jeannie (Kate Micucci) implores him to move toward a retirement home, which Hart reluctantly agrees to do. When he arrives at this affluent retirement facility, he comes across a former client of his, Buddy Green (Richard Dreyfuss), who quit being a stand-up comedian 50 years ago in order to become a successful Beverly Hills podiatrist and family man. Green had left the business just when he was about to make his breakthrough performance on The Ed Sullivan Show.

After they’ve had numerous confrontations with the mortality of old-age, as the tenants of the old folks’ home continuously decrease in numbers, Hart convinces Buddy to return to stand-up comedy. Together by car, the pair decide to drive through America, visiting numerous stand-up venues in which Buddy begins to slowly hone his craft again. Not unexpectedly, the trip does take a physical and mental toll on the men.

Along the way, Hart falls in love with an aging hippie, Doris (Andie McDowell), who inspires Hart through the use of an abundance of mind-altering substances, to have a more free-spirited perception on life. As with any road-trip movie, the journey is less about the supposed destination and more about self-exploration. A dramatic twist eventually unfolds itself which changes everything for both Hart and Buddy. Richard Dreyfuss is a legend in the industry. From blockbusters to smaller films, leading roles to supporting, dramatic to comical roles, this man has done it all. It’s always a pleasure to see him in a role, no matter how small. I know everybody is praising Christian Bale’s performance as Dick Cheney in Vice but we shouldn’t forget about Dreyfuss’ deliciously menacing turn as Dick in W.

To be fair, his talents have been wasted in numerous supporting roles or average comedies. His last great, meaty performances actually came from television with Madoff and Shots Fired. As such, it was nice to see him back on the screen even though his older appearance took some getting used to.

In the case of Chevy Chase, I’ve already gotten used to his double chin and bloated face throughout my viewing of Community. Even though he’s first-billed in the credits, this is clearly Dreyfuss’ show. Chase seemed to have subdued his usual wacky antics, however. This does give him the opportunity to give a more mature and nuanced performance.

Even though I’m happy seeing Dreyfuss in a leading role again, it’s not easy seeing one of your heroes grow so old. It’s all part of life. Nobody escapes it.

I had the same feeling watching Peter O’ Toole in Venus and Harry Dean Stanton in Lucky. At the same time, their aging appearance did add to themes of the film. Similar to those two movies, Dreyfuss does get the opportunity to show off his natural dramatic and comic chops. Most notably the scene in which he goes on stage again after all these many years. The subtle way in which he shows off his nervousness and tries to compose himself is something many aspiring actors could learn from.

Unfortunately, even though The Last Laugh has similar themes of aging and mortality — though it’s far more lighthearted — it does not come close to reaching greatness.

I’ve dabbled quite a bit into the history of American stand-up comedy. My bookshelf is stacked with the biographies of late great funny people, such as Richard Pryor or Rodney Dangerfield. It’s clear that Pritikin shares my love for the old days of stand-up comedy. The Last Laugh is filled with references to late great comedians which will escape many young viewers.

The significance on making your great TV debut on The Tonight Show will certainly be lost to many viewers. Times have changed. Your TV appearances matter but so does your social media presence. The Last Laugh works as a loving ode to the old days of American stand-up comedy.

However, the film is a little less successful on the character front. The screenplay simply doesn’t take enough chances. It doesn’t delve deep enough into the existential anguish of the characters. Considering their fears and doubts about growing old and impending death, the film plays it relatively safe and never swims over to the deep end.

It’s not that I expected an Alexander Payne film here in terms of depth, but I do feel there was more with which to work. Seeing how long these men have been in the business and haven’t had a major film role in years, this film needed to push them just a little further. It all feels a little too safe.

Pritikin also makes a few odd choices as a director. One of them being the outdated score, which makes The Last Laugh sometimes sound like a fluffy 90’s film.

But most significantly is the drug-induced sequence in which one character imagines characters singing. Notwithstanding of the fact that most of the subjects that are singing cannot sing to save their lives, or how it is accompanied by tedious green screen effects, it just goes on far too long.

It’s funny at first for how far it goes, especially seeing how much the narrative has been straightforward to that point, but the joke becomes old rather quickly.

The Character of Doris Montgomery Undoubtedly, the worst part of the movie is the character of Doris Montgomery. This is absolutely not Andie McDowell’s fault, who has proven time and again that she’s a capable actress (as anyone deserves to call themselves after working with Robert Altman). But her character nearly reaches the epitome of bad female character writing.

She’s simply there to give Chevy Chase something more to do. Since Dreyfuss has got his stand-up comedy pathos going on, Chase was given a love interest.

Now there’s nothing wrong with a love-interest if she/he is well-written or if the characters had any chemistry. As you can already guess, The Last Laugh fails on delivering on both essential components.

There’s just no reason for Doris to fall for Al. It just happens because the screenplay needed them to. Their physical differences wouldn’t matter, even though McDowell has aged far more gracefully than Chase has, if they had chemistry. (Case in point, Paul Giamatti and Virginia Madsen in Sideways.) But their scenes together, while tolerable, does wear the film down. You’re just waiting for Dreyfuss and Chase to pair up again so that the film can get good again.

Doris also represents the tired cliché of the free-spirited female who needs to rescue the old bore from his uptight rut. We’ve seen this so many times before. Again this would be forgivable if she were better written.

It’s nice seeing Richard Dreyfuss and Chevy Chase in a movie again even though the film won’t likely be remembered as one of their classics. The film is unfortunately riddled with clichés, most notably the female romantic interest who’s just there to give one of the main characters something to do.

The film does ride that fine line between humor and some light drama. The film never becomes too schmaltzy and the humor mostly works. The film also ends on a perfect comic and dramatic beat.

The Last Laugh also has a surprisingly nuanced and mature performance by Chevy Chase, and reminds us of the greatness of Richard Dreyfuss. Considering the talent and subject matter, it should be great, but instead it becomes a welcoming, if underwhelming return.

Still, fans of both these two legends, and of the stand-up comedy history in general, should go see it. 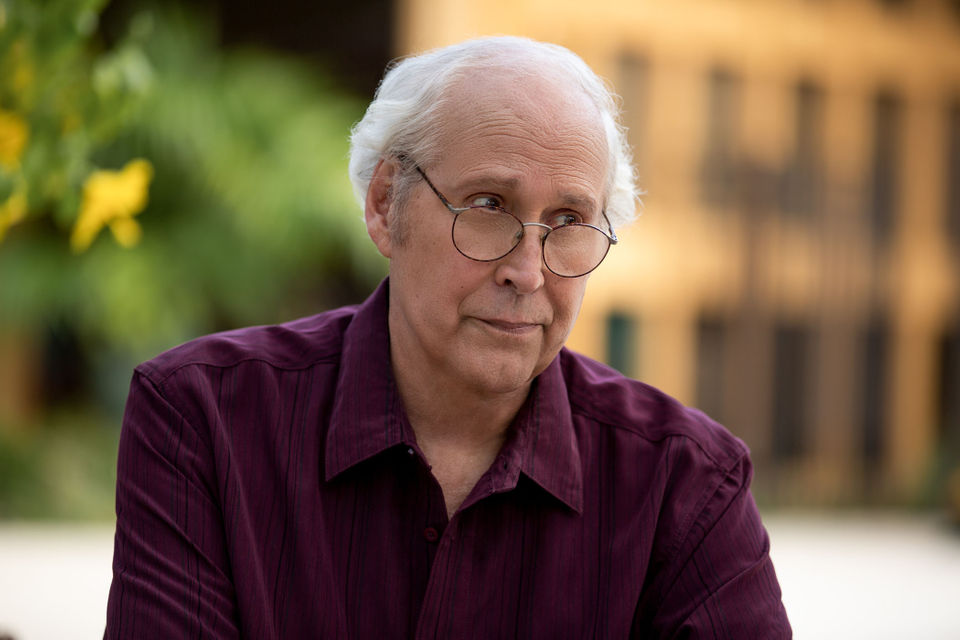 Thank you for reading! What are your thoughts on The Last Laugh? Comment down below!

[…] addressing the crime bill and the environment bill. Fed up with the way Senator Bob Rumson (Richard Dreyfuss) has been attacking him and Sydney, Shepherd finally speaks […]

Nice review. I am also a big fan of Dreyfuss. But there aren’t a lot of good roles for older actors.