‘Cabinet of Curiosities: The Outside’ – Do We All Just Want to Be Good-looking?

I'm pretty sure there's a lot more to life than being really, really, ridiculously good looking. 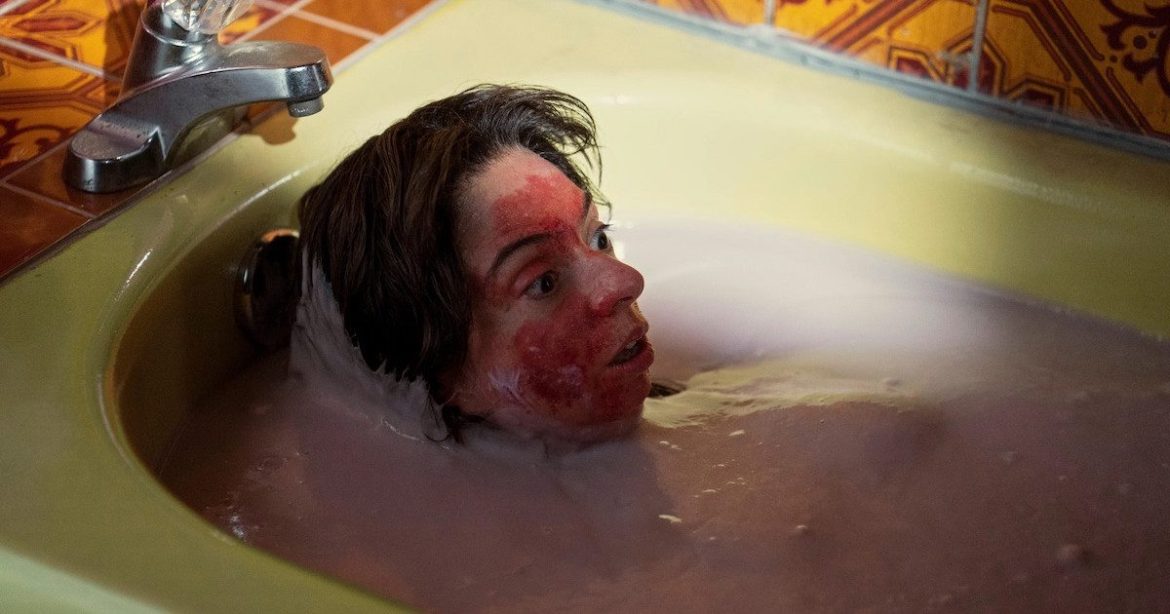 True acceptance, harmony, peace, and divinity; all that stuff is a lie. We all just wanna be good-looking.

We are first introduced to Stacey (Kate Micucci), awkwardly sway dancing to some generic jazz tune, wearing her oversized pajamas — on which is written “hang in there baby!” complete with an illustration of a cat hanging by a thread — eagerly awaiting her microwave dinner so she can devour it in front of the television. When she finally sits down in front of the television, she doesn’t watch anything of substance, but switches from channel to channel, from one mindless infomercial to another.

She works in the local bank among a horde of cosmetic-obsessed women. Stacey is rarely included in their conversations, and she desperately wants to be. Her wish to belong among them seems to be granted one day when she’s invited to their Christmas party.

At the Christmas party, Stacey is given the same gift as everyone else: a tube of Alo Glo, a popular body lotion. But unfortunately for Stacey, it gives her a terrible rash. Her husband, Keith (Martin Starr), tells her that it’s due to her sensitive skin, but Stacey tells him that it’s due to her “stupid, ugly, bad face.” Despite her husband’s loving protestations, it’s clear that Stacey’s insecurities run deep.

Then that night watching television, she comes across one of these Alo Glo infomercials, and the smarmy host (Dan Stevens), addresses her, literally. He tells her to keep using this lotion, no matter what. Telling her that if she keeps using it, eventually it will change her into the woman she always wanted to be.

By now, it should be clear where this story’s going. It’s the classic “be careful what you wish for” trope, which you will have seen countless times in anthology horror.

But don’t be discouraged. This isn’t a bad thing as it all depends on the execution. And on that front, guest director Ana Lily Amirpour makes some very interesting choices. One notable stylistic choice is the heavy use of close-ups, particularly when Stacey’s accompanied by her work colleagues. The camera comes so close sometimes that you feel uncomfortable. You can sense the awkwardness Stacey feels among them.

It’s clear why del Toro wanted her to direct an episode of Cabinet of Curiosities. Her film debut, A Girl Walks Home Alone at Night, an Iranian vampire film, is truly one of a kind, and will likely be hailed a classic in the future.

Even if her cinematic output hasn’t reached the promise of her debut, her new projects remain anticipated. Currently, she’s working on a feminist remake of Cliffhanger. Count me in.

The Outside leans closer to satire than horror, though there are certainly gruesome scenes. The satire is never subtle. Most humorously, on these Alo Glo commercials, the side effects mentioned are: “hallucinations, fear of intimacy, internal emptiness..”

There is some poignancy in the dialogue, particularly when Stacey says that “men can be fat and hairy, and impolite and old, and nobody cares,” while women are pressured by multiple commercial industries, to look beautiful and hide their age. The Alo Glo host (a devilishly good Dan Stevens) is the demonic representative of this. He’s preying on Stacey’s fragile psyche just to sell his product, just so she can feel worthy among all the beautiful women. We see how this obsession with physical perfection can ultimately be so destructive to the human spirit.

Again, it’s not subtle, but sometimes satire doesn’t need to be. Sometimes it just needs to be vicious.

This is, however, one of those episodes that could have been feature-length. It mixes body-horror and psychological horror, and it works less well on the latter, and that’s because it feels slightly rushed. One key moment feels sudden. It’s unlike David Cronenberg’s The Fly, where an appropriate amount of time is spent on the both main character’s psychological and physical deterioration.

Not all the humor works either. The dialogue between these superficial women is supposed to be funny because of how banally hollow they are, but it lacks wit. Instead of this, there’s a series of over-the-top vulgarity; at times, it feels like the screenwriter is trying too hard. On occasion, the tone doesn’t work either. It’s not clear whether some moments are supposed to be disturbing or darkly comedic.

Micucci is perfectly cast as Stacey, especially in how Amirpour continually exploits her arresting eyes, where we can see her character’s desperation and mental degradation. You know she’s sick, and her taxidermy hobby — there’s one unfortunate CGI duck killing in this episode — is something I’m particularly not fond of, but we never forget her humanity. We want her to snap out of this delusion, just as we want other women to avoid the trappings of the beauty industry and focus on what’s important.

All of it culminates in a tragically fitting scene that is capped off by an eerie rendition of “I Believe in Miracles.” With this, we are reminded that Stacey’s tragedy is one of many, that she’s one of the many women out there looking for self-acceptance in all the wrong places. It’s been like this for so long, and unfortunately, we all know that it’s going to likely stay that way.

Thank you for reading! What are your thoughts on The Outside? Comment down below!