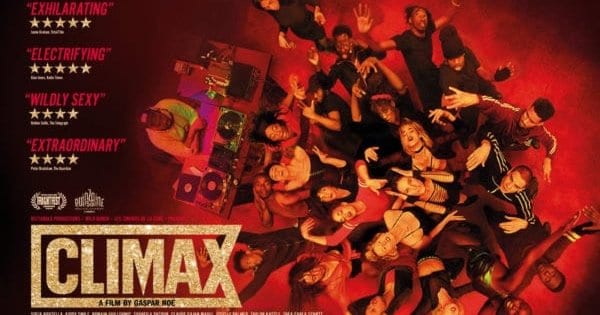 Expectations are very interesting to examine when it comes to film. Seeing a filmmaker’s name attached to a movie often gives you an idea of what you’re in for. However, whenever you see the words “Un Film De Gaspar Noé”, You have no idea what you’re getting into, but you know whatever it is, it will be insane.

Argentine-born French filmmaker Gaspar Noé is an incredibly divisive and often controversial and provocative writer and director. He is known for his incredibly explicit films that heavily feature social taboos such as graphic violence, sex and drug use. And his latest film Climax, cranks the insanity all the way up to 11.

In France in the winter of 1996, an urban dance troupe get together in an isolated, closed down boarding school in the middle of the forest for three days of rigorous rehearsal before going on tour. On the final night of rehearsal they throw a huge party and dance the night away.

The atmosphere of the party drastically changes when the Sangria they have all been drinking is discovered to be laced with LSD, causing the dancers to violently turn on each other.

Admittedly, I think the A24 trailer is really bad. I encourage you to watch the Teaser below instead.

As mentioned at the top, Gaspar Noé is no stranger to controversy. His films are definitely an acquired taste and he is very much a filmmaker whose work you will either love or hate. Noé has even cleverly worked the hatred audiences have had towards his previous films into the marketing for Climax with the film’s teaser poster pictured below. The poster also features Noé holding a cup of the spiked Sangria with a devilish smile on his face, as if daring the audience to see his film.

Climax also had an interesting production history. It took just 15 days to shoot and the overall production, from writing the script, pre-production, principal photography to post-production was reportedly all completed in the span of JUST 4 MONTHS. That. Is. Insane. This was done so quickly in order to meet the deadline for the Cannes Film Festival, which it screened as part of the Director’s Fortnight and won the International Confederation of Art Cinemas (CICAE) award. 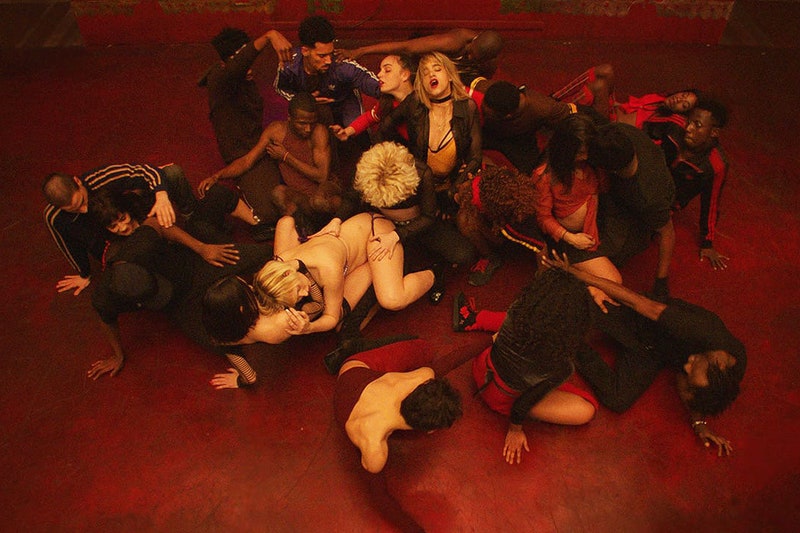 If I was to give you only one reason to Climax on the big screen, it would be for Noé’s remarkable filmmaking prowess and the incredible way in which the scenes in this film are staged, shot and choreographed. The first dance number in this film (set to an instrumental version of Supernature by Cerrone) is nothing short of spectacular. It’s an unedited sequence that lasts for about 8 minutes, but it never skips a beat or loses any momentum. Watching these actors and dancers pull off these incredibly complex (and very cool) moves to the beat of this pulse-pounding techno track was a completely immersive experience.

The cinematography is stellar and puts you right in the middle of the insanity. Just like the opening number, there are a number of long, unedited tracking shots where the camera is constantly in motion. The camera floats effortlessly from one character to the next, highlighting both Noé’s precise direction and staging, Benoît Debie’s talent as a cinematographer and the cast for their execution in these scenes

These long, fluid shots are juxtaposed very nicely with a number of static, bird’s-eye view shots with many quick cuts in the next dance number, which was quite an inventive and cool method to shoot that sequence and it looked fantastic. The production design of the film is also spot on. You get a real sense of the geography of where everything is in this fluorescent light drenched old schoolhouse. The contained setting elicits a very strong sense claustrophobia and a feeling that there is no escaping the ensuing craziness. Climax Doesn’t Know When to End A Scene

The biggest problem with Climax is that scenes go on for WAY TOO LONG!

Almost every single scene in this film feels like it was about 5 minutes too long. That bird’s-eye dance sequence mentioned earlier, although very well staged and performed, goes on for what seems like forever. There isn’t a whole lot of variation in the dance moves in this sequence than there was in the opening number either, so it got very tiresome, very quickly.

Another scene that goes on forever is the film’s opening, where all the dancers are being interviewed about why they want to join this dance troupe. The scene is presented really well with the interviews playing on an old 90s box TV in the center of the frame, with shelves on either side filled with books and VHS tapes of films like Suspiria, Possession, Schizophrenia and The Discreet Charm of the Bourgeoise (clearly all big influences on Noé’s work).

However, this scene attempts to introduce all the dancers and cram as much exposition as they possibly can in the span of about 10 minutes, which was too much. This film introduces the backstories and personalities of roughly 20 characters in such a short and honestly expects the audience to remember every character’s name? That’s not gonna happen. If it was just maybe Sofia Boutella‘s character and few other central characters, that would have been enough. But because all of them are there, it was information overload for information that wasn’t really necessary as a number of these characters don’t really do anything of note.

As the audience, you’re starting to lose patience with this film in the first 10 minutes and looking at your watch wondering when the dancing or the crazy shit is going to commence.

Climax Has Nothing To Say

I’m all for a film wanting to push the boundaries of what you can show in a film, as long if there is purpose for it or a reason to do it beyond the filmmaker saying “because I can”. Climax gives no such reason because this film is so vapid and it’s anti-drug message has about as much subtlety as an 80’s after school special.

There are only so many shots of people screaming, fighting, dancing, gyrating and flopping all over the floor I can sit through until it becomes monotonous, repetitive and boring. Pair this with the unnecessary length of these scenes and it just becomes a slog to sit through. I’m fine with the film having a basic anti-drug message, but because these scenes drag on for what seems like an eternity, I wonder if this was done because it’s a really pretentious and self-indulgent film, or because Gaspar Noé thinks his audience is stupid and won’t pick up on these basic themes straight away. Either way, it was incredibly frustrating.

Another big problem is that all of the characters in this film are terrible people and you couldn’t care less about any of them. I’ve harped on a lot about scenes in this film that just keep going on, but the nadir of this film is this long sequence, intercutting between a number of conversations between the dancers talking about their sex lives and the members of the group they find attractive and want to sleep with. This was honestly unbearable.

Apparently, these scenes were improvised and you can tell, because the dialogue is really bad. It also didn’t help that these characters were played by dancers and not actors, whose performances in this scenes were passable at best. As impressive as the quick rate of production on the film was, maybe little bit more time could’ve been spent on the script and give the audience any reason to care about anything when the madness begins. 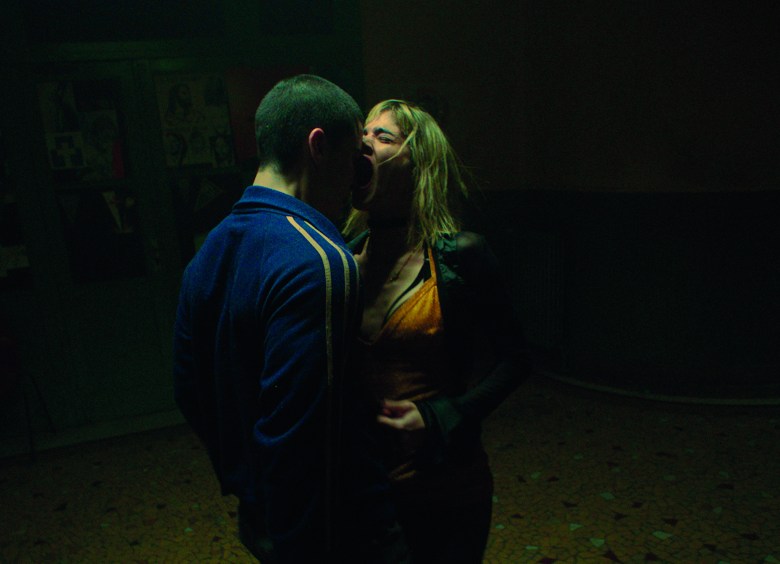 Climax is the definition of a film that all style and no substance (although there is a lot of substance use, if you know what I mean). It’s visually astounding, the dance numbers are staged and choreographed with incredible precision and style and the insane things happening in a contained setting does evoke very strong feelings of paranoia and entrapment.

Unfortunately, that is all  Climax really has to offer. It’s a hollow and empty film with a bunch of horrible people doing horrible things to each other and is extremely repetitive and gets very boring, very quickly. Perhaps Noé was trying to make some sort of commentary about impact of drugs on the French youth culture, but it didn’t come across that way to me.

Oddly enough, I would still recommend that you check out Climax. It’s a very unique cinematic experience and is interesting to watch with a packed audience. It’s one of those films that will be very divisive, so you’ll have to see it for yourself make up your own mind. 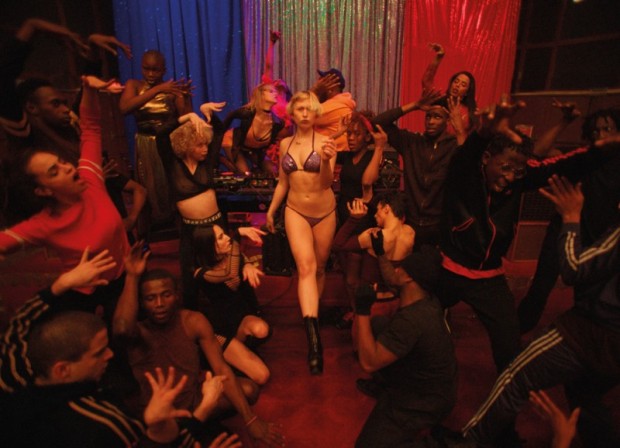 Image via The Film Stage

Thank you for reading! What are you thoughts on Climax?  Comment down below!

[…] the same time, the focus on only a few characters is a slight pitfall to the film’s climax. It is fairly easy to figure out what is going to happen, and who will be involved with what. This […]

[…] it was all played for laughs. Some of the dialogue is unintentionally hilarious, especially in the climax of the movie. If the Irish stereotype was played for as a joke, there could have been an emphasis […]

[…] know something is a phenomenon when it makes Gaspar Noe‘s Love — an explicitly unsexy movie — also popular. Usually, I would say […]

Definitely agree with your review here. I’m a big Gaspar Noe fan but this ended up being a bit of a disappointment, albeit with some great moments, mainly the choreography and cinematography around the dance sequences.

I wrote my own review here > https://dublinfilmfiend.wordpress.com/2018/09/29/film-review-climax-plenty-of-promise-in-the-build-up-but-it-never-really-gets-there/

I saw this last night, I’d have to agree with your review. I’m puzzled as to why there are so many positive reviews of what is a film without any of the things people go to see films for: plot, good acting, interesting script. Sure, the dance sequences are fun for a while but I just thought the dancing was ugly, impressive, but ugly. And oddly non-sexual. If there was a anti-drugs message it didn’t work for me because that’s not what happens when you take drugs. I mean, this was very similar to the government warnings that if you take LSD you’ll try and jump off a tall building…Who did that?! All the scenes were too long, boring and predictable. I just wanted one person to be likeable or human in some way but they were all monsters. Even when the emergency services arrive, they bring a dog and don’t seem too concerned about what has happened. A strange and ugly film, but not terrible.