Can’t Stand the Heat: Love and Hate on a Hot Summer’s Day in ‘Do the Right Thing’ 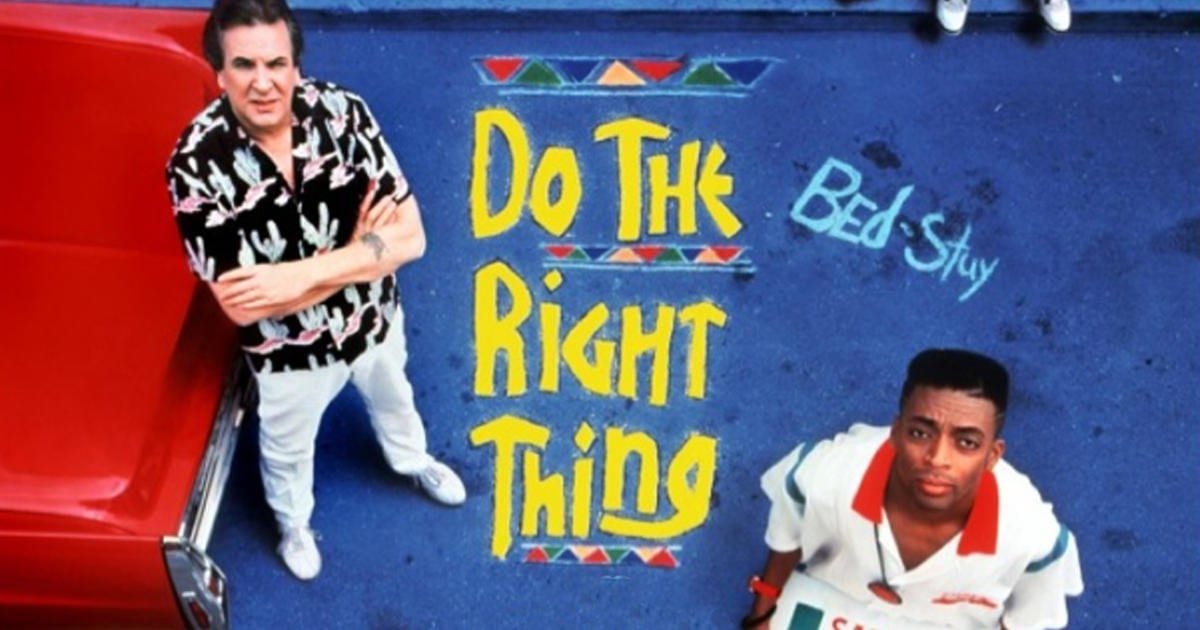 On January 29th, 1956, CBS aired an episode of Alfred Hitchcock Presents titled “Shopping for Death,” based on a story by Ray Bradbury. In the episode, a pair of retired insurance salesmen trail a longshoreman’s wife during a brutal heatwave. The two men theorize that higher temperatures bring on what they call “killing weather.” They fear that the woman’s unpleasant demeanor could provoke her murder.

Thirty years after “Shopping for Death” debuted, Trinidad native Michael Griffith was found dead on the Belt Parkway in Queens, New York. A group of young white men had accosted Griffith outside a local pizzeria the previous evening. They chased him onto a highway, where he was hit by a passing car. Not long before Griffith’s death, a Brooklyn-based filmmaker named Shelton J. Lee had released his debut feature, She’s Gotta Have It. Lee — soon to be better known as “Spike” — would ultimately use both “Shopping for Death” and the recent string of black murders in America as inspiration for what many now consider his ultimate cinematic masterpiece. 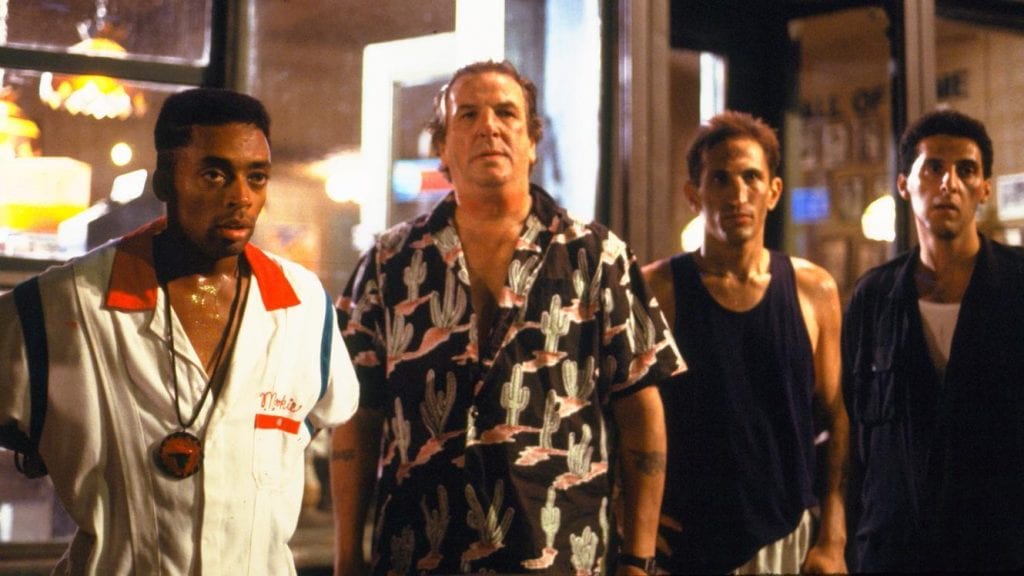 Last month, Do the Right Thing celebrated its 30th anniversary. In those three decades, the film has lost none of its electricity or its timeliness. Lee observes the neighborhood of Bed-Stuy through the eyes of pizzeria employee Mookie (played by Lee himself). The film uses heat as one of its main catalysts as local racial tensions gradually stoke themselves into a raging fire.

Right from the start of Do the Right Thing, it’s established that Bed-Stuy finds itself locked in the throes of a stifling heatwave of its own. Resident DJ Mister Senor Love Daddy (Samuel L. Jackson), issues a “Jheri curl alert” to his listeners from “the cool-out corner” and advises them to conserve water in the hundred-plus-degree heat. When we’re introduced to amiable town drunk Da Mayor (Ossie Davis), his first words are “It’s hot!” The same goes for Sal Frangione (Danny Aiello), the hard-nosed owner of Sal’s Famous Pizzeria. Annoyed at the heat and by his squabbling sons Vito (Richard Edson) and Pino (John Turturro), Sal issues the telling phrase, “I’m gonna kill somebody today!” (Refer to: “Shopping for Death.”)

“Those that’ll tell don’t know, and those who know won’t tell.”

One of the film’s most memorable montages involves Bed-Stuy residents finding any way they can to stay cool — be it via a cold shower, a couple frosty brews, or a headfirst plunge into a bucket of ice water. Two locals, Punchy (Leonard Thomas) and Ahmad (Steve White), even decide to crack open a fire hydrant, much to the enjoyment of the neighborhood youngsters. 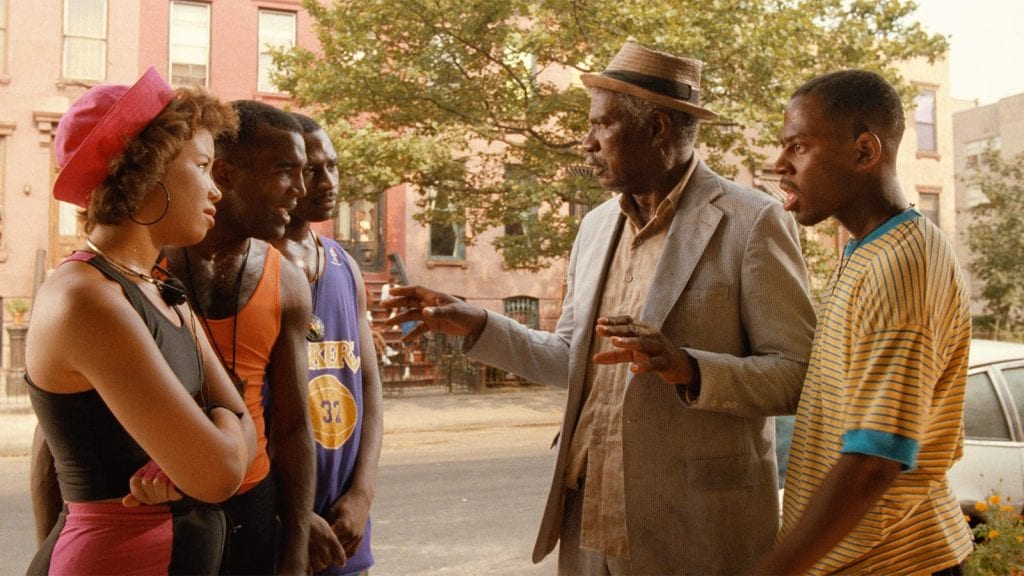 The fun comes to a quick halt, however, when the hydrant sprays affluent white motorist Charlie (Frank Vincent). Livid, his clothes and car totally drenched, he demands that officers Ponte (Miguel Sandoval) and Long (Rick Aiello) bring the culprits to justice. By that point, “Moe and Joe Black,” as Charlie derisively calls them, have long since made their getaway. The cops dismiss Charlie’s trivial complaint. Still, they leave the remaining kids with a stern warning not to mess with the hydrant. “If you wanna swim,” growls Long, “go to Coney Island!” (Appropriately, the whole sequence is soundtracked by Steel Pulse’s “Can’t Stand It” and its repeated refrain of “can’t stand the heat.”) We see in this scene how hot weather brings out the bigoted ugliness already lurking through Bed-Stuy. Young people of color can’t even cool off on a hot day without getting in trouble for it.

The heat also impacts a trio of street-corner philosophers who watch the neighborhood from their conveniently-located perch. The bright, blinding red of the building behind them makes ML’s (Paul Benjamin) comments on global warming all the more poignant. “Well, gentlemen,” he somberly tells his buddies Sweet Dick Willie (Robin Harris) and Coconut Sid (Frankie Faison), “if this hot weather continues, it’s going to melt the polar caps and the whole wide world. And all the parts that ain’t water already will surely be flooded.” 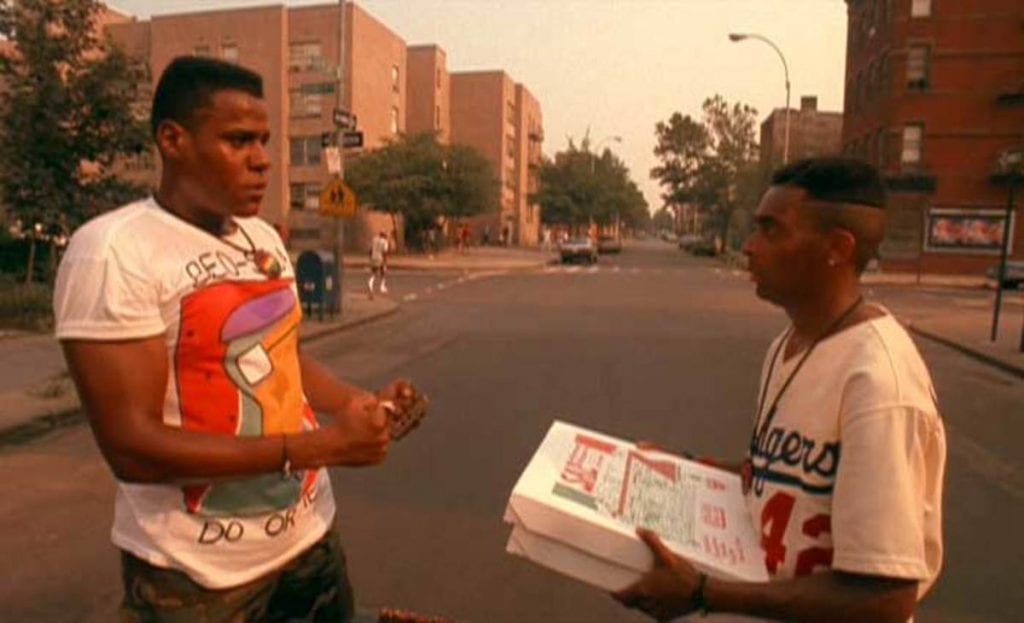 Sid and Willie taunt ML for his “simple” beliefs. If only the three of them knew how prophetic those beliefs would prove to be today. Just last year, it was announced that we have 12 years to bring climate change under control before we face irreversible consequences. Indeed, the concept of global warming in Do the Right Thing signifies an implement of change. Climate change alters the fabric of the world. The increased heat associated with it alters the world of Bed-Stuy.

Similarly, the guys discuss the effect of the heatwave on one of their favorite, uh, pastimes. While Willie claims that no weather extreme has ever inhibited his sex drive, Sid flatly declares that it is simply “too hot to [have sex].” In the context of the film, that statement could easily double as “It’s too hot to love.” In other words, the heat makes it harder for one to respect his fellow man — and easier to give in to rasher, more violent instincts.

Just as the world’s ignorance of climate change must eventually reach a reckoning, so must the rage and unease fermenting through the heart of Bed-Stuy culminate in a gripping climax. After Radio Raheem (Bill Nunn) is killed in the aftermath of a boycott of Sal’s Famous, Mookie decides to take action. He throws a trash can into the window of the restaurant, which is immediately looted and set on fire. 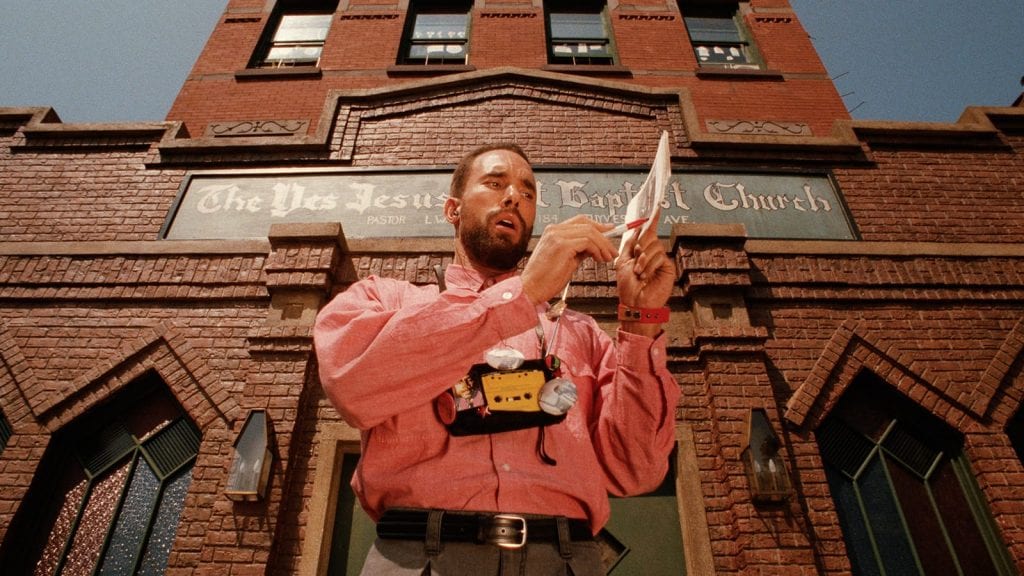 Lee has said that audiences — especially white audiences — often ask him whether Mookie lives up to the movie’s title. Does he follow Da Mayor’s admonition to “always do the right thing”? Was it right for him to trigger the explosion of Bed-Stuy’s heated anger into the literal hellfire that destroyed Sal’s?

Frankly, the question is absurd. Of course, Mookie does the right thing. By breaking Sal’s window, Mookie turns the mob’s vitriol away from Sal and his sons. He acts in a way that simultaneously reflects the black community’s anger over Raheem’s death and saves Sal’s life. Sure, he damages some property in the process, but that’s nothing compared to the destruction of a human life (i.e., Raheem’s life). 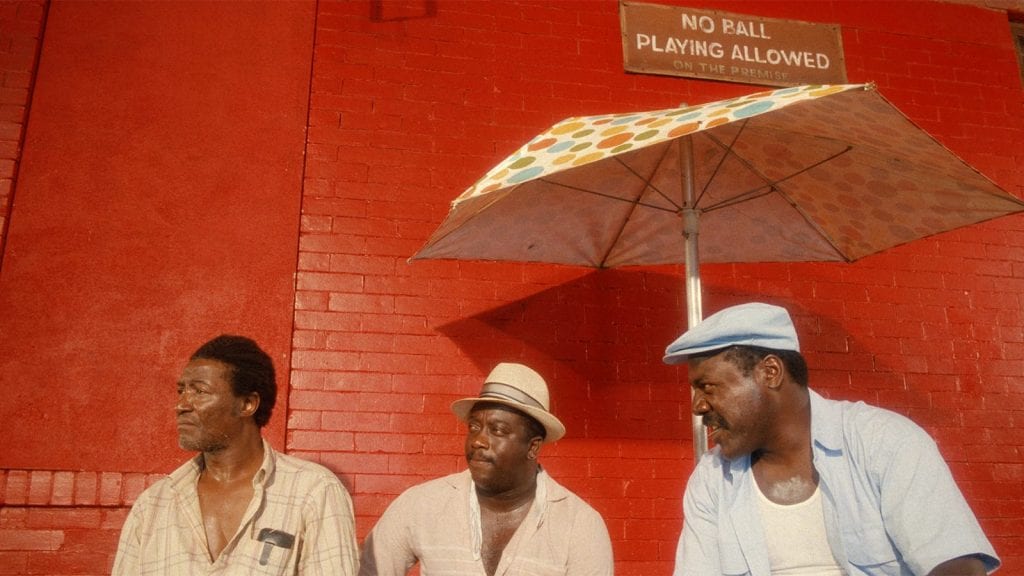 “Thank the Lord, the sun is going down.”

The images of civil rights leaders Martin Luther King, Jr. and Malcolm X loom large over Do the Right Thing. This is thanks in no small part to the character of Smiley (Roger Guenveur Smith). The pastel-clad warrior literally totes their images around the neighborhood and ultimately places them on a fiery pedestal. Both King (who condemned violence as a means of racial justice) and Malcolm (who referred to such acts as “intelligence”) would no doubt both have approved of what Mookie did that night. Lee highlights the fact that these men, despite differing worldviews, remained close friends in support of a common cause.

The state of the world has steadily declined for years now. The son of a racist landlord occupies the White House, and neo-Nazis and white nationalists freely spout their hate. As such, Do the Right Thing‘s message is just as urgent and relevant as it was 30 years ago. Lee urges us to consider the value of human life — and to be unafraid to fight for the disenfranchised if necessary. It’s an ugly, beautiful, dangerous, brilliant film, vibrant and full of life — a masterpiece.

Thank you for reading! What are your thoughts on Do the Right Thing? Comment down below!