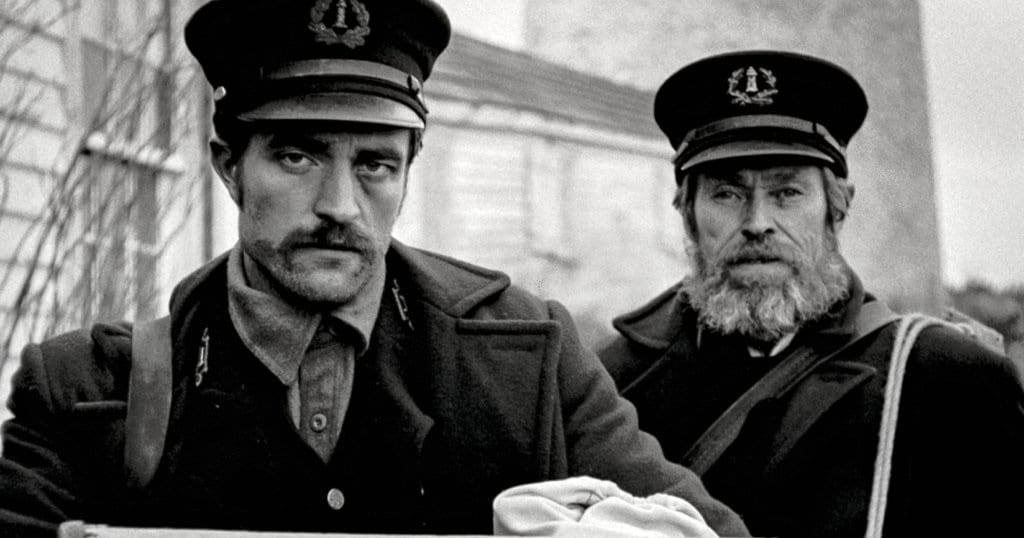 “I mean, where has Hollywood been hiding this man (Pattinson) for the past twenty years?” the man says in bewilderment after his screening of The Lighthouse, the new psychological horror film from Robert Eggers.

In a related story, this man is now the president of the Twilight fan club.

The Lighthouse has posed a particular problem for me which is that I now want to watch every Robert Pattinson movie in existence. I have previously had this problem where I went on a journey of watching every Emma Stone and Ryan Gosling movie I could find due to my love for La La Land. I now want to do that for Robert Pattinson after watching his amazing performance in The Lighthouse.

For those unsure of what The Lighthouse is, let me try and synopsis the unsynopsizable.

In the late 1800s, Ephraim Winslow (Pattinson) takes up a four-week job working as a wickie on an isolated island with a lighthouse. Throughout his stint, he is berated and cared for by the lighthouse keeper, Wake (Dafoe).

Immediately, Winslow suspects there is more to the lighthouse and Wake than what is shown on the surface. Slowly Winslow is subjected to hallucinations and mysteries as he also becomes closer to Wake.

When a storm comes to the island the two are trapped together and must depend on each other for survival. Winslow and Wake both begin to unravel as secrets and mysteries begin to come to light. The question then becomes what is more dangerous: the secrets of man or the secrets of the lighthouse. Either is a secret that could take more than just their sanity.

Now for the cliff notes:

And after all of that, you now might have the smallest of ideas if you are intrigued enough to see The Lighthouse.

So, how should I talk about The Lighthouse?

If I spoiled the entire movie right now, most people would think that this movie sounds like the most ridiculous thing ever shown on the big screen. No matter how I try and say it, my words sound ridiculous. There isn’t a single thing that happens in this movie that should work. But somehow, Eggers uses his skill as a filmmaker to tell a poignant, emotionally charged, and uncomfortable at times tale of two lighthouse wickies in the 1890s.

In The Lighthouse, Robert Eggers, much like in his debut film The Witch, creates an experience that is hard to explain to someone when they ask you the question, “What was that movie about?” Everything is not spelled out for you. Some leaps of faith must be made, and you have to go in knowing that you might not fully grasp everything that is being shown to you. A lot is going on right under the surface of The Lighthouse and it can be frustrating sometimes knowing there are things you are missing that might not be caught with even a second viewing (subtitles could have helped me though).

With that said, from the production to the acting, The Lighthouse delivers tour de force performances and an atmosphere that I will not forget anytime soon. If you appreciate psychological horror mixed with fantastical elements, The Lighthouse should not be missed.

The atmosphere in The Lighthouse, much like in The Witch, is what carry’s the viewer through the film. That atmosphere includes a toolbox of filmmaking tricks that all aspiring filmmakers should take notice of. Including but not limited to, constant dread, the “did I just see that” moments that you find constantly within the runtime, and fascinatingly perplexing character motivations.

Putting all those elements together in a film so masterfully, to me, is the best kind of film. One that I am still thinking about days after my viewing. That experience is The Lighthouse.

The Lighthouse was much more than the atmosphere though. This time Eggers decided to play with how the film was shot and edited. Having this film done in black and white, as well as the 1.19:1 aspect ratio gave the film a feeling like an old silent film and an unmatched sense of intimacy. A lot of what you see as the viewer is simply Dafoe and Pattinson. It is their faces, their eyes, their hands. They are the movie and take up the majority of the screen. Using this tactic creates a very claustrophobic experience, even to go so far as feeling like you are sharing the lighthouse with them.

Piggybacking off of the atmosphere is the performances, and they are what take The Lighthouse to the next level. Dafoe and Pattinson spent the entire film together, in close quarters, balancing the line between love and hate. They go from drunkenly singing to fighting without skipping a beat. As one would start to open up, the other would lash out at them into monologues that I can imagine being recreated during casting calls for years to come. The things that you can tell these actors went through to create this film is nothing short of an awe-inspiring dedication to the craft of acting. The performances alone are worth the price of admission, and I think they will be celebrated come awards season. (Hopefully.)

I think that most people already knew if they were going to see The Lighthouse well before this review. The more time that has passed from my viewing the more I have appreciated and grown to adore The Lighthouse. I constantly find myself wanting and searching for any new interview or theory that I can absorb to shed any additional light into the full scope of this movie. As I devour each new scrap of content being produced online the more, I can’t wait to see it again.

Thank you for reading! What are your thoughts on The Lighthouse? Comment down below!

[…] like to live by a few principles, one of them being Willem Dafoe makes every movie better. It doesn’t matter if he has a hilarious man-bun and speaks a few […]

[…] and doesn’t seem interested in much at all. Willem Dafoe, whom I consider a godsend (watch The Lighthouse and tell me I’m wrong), gives a predictably solid performance as the mentally frail father. […]

[…] Twitter sensation upon the film’s theatrical release as well as join the group of kids in A24 movies that you would go to war for. I mean, […]

[…] Take: Shout out to Jarin Blaschke for his work on The Lighthouse. It’s one of the most pleasant surprises in the entire field, mostly because I thought The […]

This is not my kind of movie and not a Defoe fan but do like Pattinson, who is weirdly wonderful in The King as the Dauphin.

Drawing things in is literally the opposite of what lighthouses do.

Lol. You are so right! Oops haha