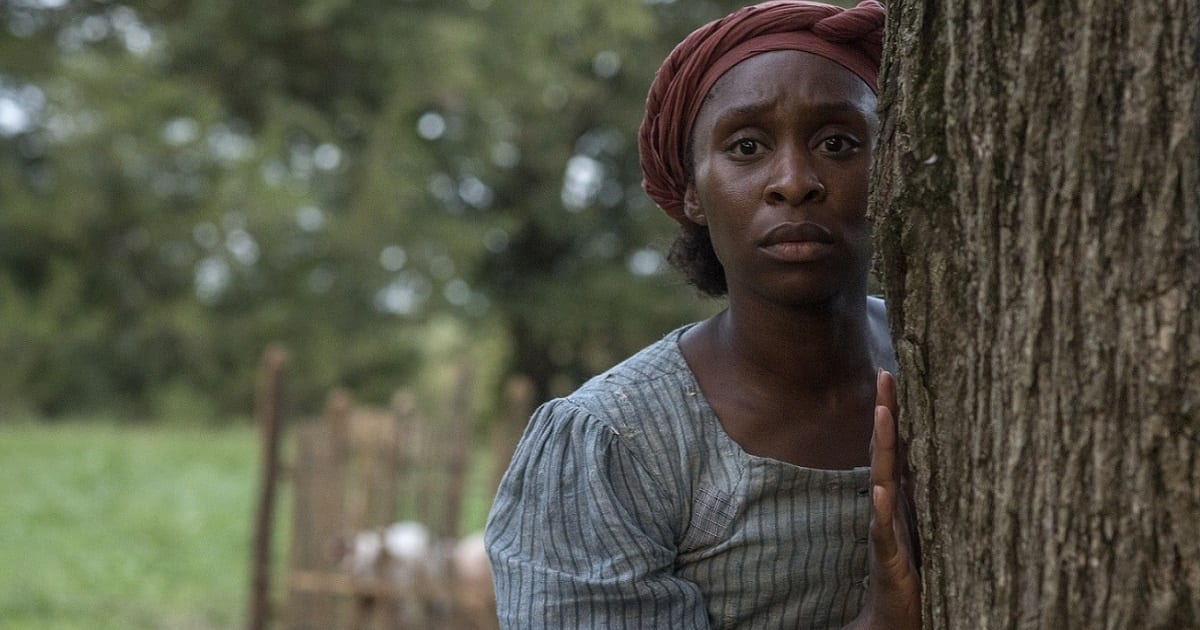 It’s not uncommon to see a movie, television show, or story about a man who stands up against injustice. However, the same story with a female protagonist (especially a female protagonist of color) is not as commonplace. At this point, we’ve all been far too inundated with biopics about a great historical man. Thankfully, the new Harriet Tubman biopic, Harriet, was just released in theaters.

Known on the plantation as Minty, the future Harriet Tubman (Cynthia Erivo) was born a slave. Though her father was born free, she is enslaved because her mother is a slave. After the death of her master, Minty knows that she will soon be sold. Her only choice is to escape to freedom.

After a 100-mile journey from Maryland, Harriet arrives in Philadelphia. Assisted by William Still (Leslie Odom Jr.) and Marie Buchanon (Janelle Monáe), Harriet settles down into the quiet life of a free person of color. But while she resides in freedom, Harriet feels uneasy that her family is still in bondage. This uneasiness sends her back to Maryland, to free as many slaves as possible.

Going back and forth earns Harriet a reputation… and a price on her head. One of those who would like to see her captured is Gideon Brodess (Joe Alwyn), the son of the family who owned Harriet. History tells us that Harriet Tubman does eventually achieve her goal, but not without many obstacles in her way.

As you may know, the Bechdel test is defined as a test that reviews the roles of women in fiction. The criteria of passing or failing is based on a conversation between two or more women in a scene who all talk about anything other than a man. Based on the benchmark set up by the test, Harriet passes with flying colors.

I would love to say that people of color, especially women of color are given an equal amount of screen time and equally strong character arcs in dramatic films. But they aren’t. As much as I loved the final Avengers films, the majority of our heroes within this world are white and male. Similarly, in Black Panther, Nakia (Lupita Nyong’o) is most certainly a badass. But she and T’Challa (Chadwick Boseman) also rekindle their romance by the end of the film.

Harriet passes the Bechdel test because her end goal is not based on a romantic relationship or a lack thereof. Historically speaking, we know that Harriet Tubman was married when she made that first daring escape to freedom. We also know that she married after the Civil War. Lemmons and the rest of the screenwriting team kept to the known historical narrative and took the writing path less traveled. There is no fictional romance between her real-life husbands. The narrative is driven by her goal to free as many slaves as possible. It’s always nice to see a film about a woman of color (or woman of any race or nationality) do something on screen that is not attached to a romantic relationship.

The key to a good villain is understanding them, even if the audience member does not agree with him or her. In Harriet, Gideon Brodess is our villain. Gideon could have been written as a younger version of Edwin Epps (Michael Fassbender) from 12 Years a Slave. But he is written in such a way that the audience almost starts to connect with him emotionally. In another time and place, we might have understood his perspective and the choices he makes. But, given the era and his character arc, he becomes a symbol for the evils of slavery and havoc it wreaks on those enslaved.

Though Gideon is a fictionalized character, the Brodess family-owned Harriet in real life. As villains go, Gideon is a nuanced character. There are moments in the film in which the audience member can read his emotions. Having grown up with Harriet, Gideon understands her. But he also understands that her work brings in income for him and his family. He has no choice but to do everything in his power to bring her back when she runs away.

The Casting of Cynthia Erivo is a Non-Issue

My only issue with the film is not the film itself. It is the criticism that because Cynthia Erivo is British by way of Nigeria and not African-American, some have complained she should not have been cast. We’ve seen this topic pop up recently, notably with Samuel L. Jackson’s remarks in regards to Get Out. Granted, I am not African-American and cannot see the film through that perspective. But I feel like the criticism is unwarranted because Erivo is fantastic in this role. It was a matter of the creative team choosing the best actor for the role that would do justice to the venerable Harriet Tubman and her legacy. In this case, the best actor for the role is Cynthia Erivo. She handles the role with such grace and virtuous tenacity in an awards-worthy performance.

Harriet is brilliant and I believe, a must-see for anyone who believes in the freedoms that the United States is built on. Director and co-screenwriter Kasi Lemmons tells the story of her subject in a manner that simultaneously humanizes Harriet and gives her the proper moment in the spotlight.

Thank you for reading! What are your thoughts on Harriet? Comment down below!

[…] and his inclusion as a character in One Night in Miami… is what initially drew my interest. Leslie Odom Jr.‘s portrayal (more like channeling) of Cooke was indeed my favorite aspect. However, the film […]

[…] but historians and fans of Queen alike noticed the mishandling of Freddie Mercury’s bisexuality. Harriet, although faithful to Harriet Tubman’s story, struggled to create an interesting story structure. […]

I really enjoyed this movie!

I enjoyed the pacing of it … even though a movie can be made from the parts that were left out. I could tell which people in the theater had no idea of the history of Harriet Tubman or pre-civil war by the reactions to slave treatment. That was a good reason to have this movie out there! I had a conversation with someone after the movie that watched it. The talk lasted about 30-minutes!!

This was a great review. Thanks for posting it…

I waited a long time for this film and was not disappointed. Now I wait for the day we can get the murderous Jackson off the twenty dollar bill and put Harriet’s face on it. I doubt she would approve but we need a virtuous icon/hero. I’m looking into the stamp that some are using to blot out Jackson on the twenty. The man sent almost ten thousand to die on the Trail of Tears, many of them the Cherokee, who helped him win the battle of New Orleans.

‘Inglourious Basterds’ and Putting a New Spin on...

‘Music’ Is Irresponsible, Embarrassing, Offensive, and Horrifically Out...