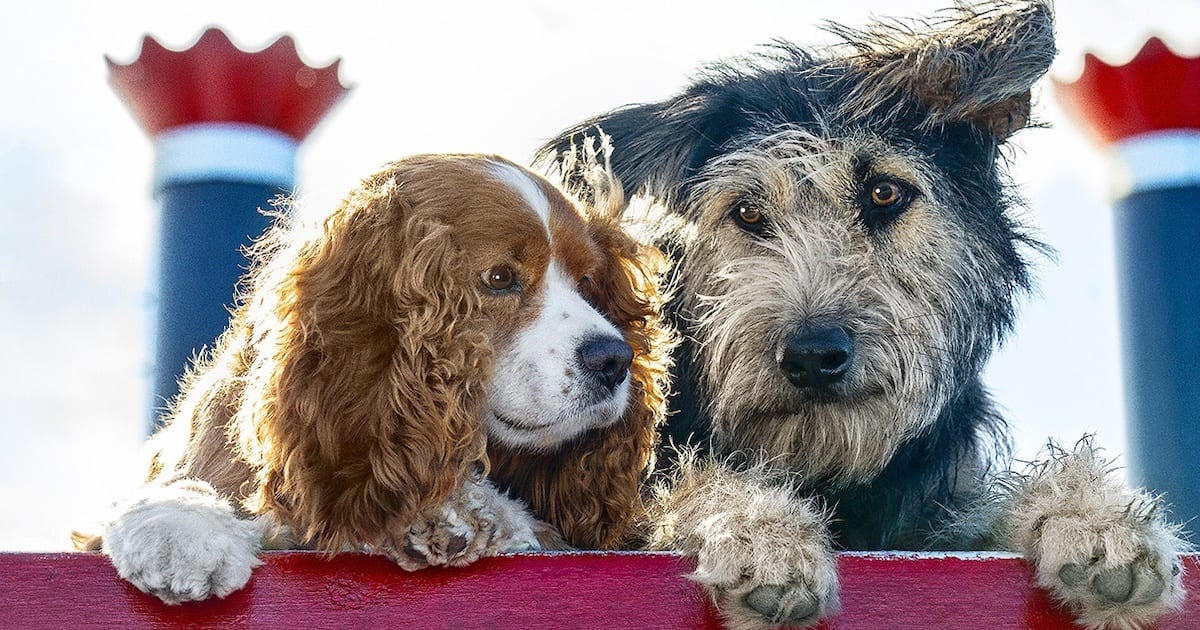 Every so often, I watch a movie and am immediately filled with dread afterward because I have no idea how to discuss it. Any critic will tell you that the hardest reviews are those you feel absolutely ambivalent towards. Upon watching Disney’s live-action remake of Lady and the Tramp, I threw my hands up in befuddlement, confused as to what take I could assemble about a movie that, in of itself, has no take on its own material, and is also the latest movie in a long line of live-action remakes that also have no new takes on their hallowed properties. At this point, the line “[insert Disney live-action remake here] is a bland, shallow recreation of material that you love” applies to an overwhelming majority of such Disney productions. We’ve all been in this exact position many times before that continuing to write critically about these movies is almost an exercise in futility.

You know the story of Lady and the Tramp. The prim and proper dog Lady feels that she is on the outs with her owners, Jim Dear and Darling, after they bring a baby into the world. She was once the center of their attention but is now relegated to the side. A few miscommunications occur, Lady is thought to have destroyed the house when in reality it was Aunt Sarah’s devious siamese cats, and she is muzzled — only to be later freed by Tramp after she escapes into town. They share a romantic dinner, trouble with the baby ensues, yada yada…Lady and Tramp are welcomed back into the house by Jim Dear and Darling. The end. Merry Christmas. Years of nostalgia ensue, and the 1955 version of Lady and the Tramp is still heralded as an animated classic.

As for the 2019 version of Lady and the Tramp, refer to the paragraph above, but remove the parts about nostalgia (no one will feel nostalgic about this version) and it becoming heralded as a classic. Instead, there are two things that Lady and the Tramp will be remembered for: it is the headlining original movie for the release of Disney+ and another attempt by Disney at making a live-action remake out of an established, popular property.

It’s difficult not to feel at least slightly cynical when watching one of Disney’s live-action remakes. The behind-the-scenes business decisions are almost appallingly obvious, with Disney clearly leveraging a property that you love, repacking it in a different skin, and reselling it for insane amounts of cash. This idea isn’t new. But compounded with the release of Disney+ and a lack of any new artistic take on the property, I felt nothing but unabashed coldness towards 2019’s Lady and the Tramp, a corporate product which continuously sways back and forth between offensively and inoffensively bland.

In typical Disney fashion — when the movie is not filmed entirely on a green screen — the production design in Lady and the Tramp is suitably, if unremarkably, old-fashioned. The bright palette, the cobblestone roads, and the horse-drawn carriages are always lovely aesthetic choices, and this window dressing has always been part of the reason why these Disney movies feel so inviting and warm. Also great is the cast — both in live-action and voice roles — which is headlined by Tessa Thompson as Lady and Justin Theroux as Tramp, who are both inspired choices for the two lead voice roles. Thompson, who continues to always be fabulous, has a glamorous quality to her voice that matches Lady nicely, and Theroux’s general rascal-like demeanor is an equally good match for Tramp. Sam Elliott, Janelle Monáe, Kiersey Clemons, and Yvette Nicole Brown are all welcomed additions to any cast as well.

But for the most part, all Disney movies assemble absurdly stacked casts. Just last month saw the release of Maleficent 2 which had Angelina Jolie, Elle Fanning, Michelle Pfeiffer, Juno Temple, Lesley Manville, Chiwetel Ejiofor, Imelda Staunton, and Ed Skrein. For Lady and the Tramp, having recognizable faces and voices is nothing to praise, as it is a standard set by a company that, generally speaking, wishes to populate its films with great personalities to distract from their films’ hollow artistic aims. It’s even more disconcerting when these voices are filtered through dogs with CGI mouths that are only a few steps above the technology used in last year’s Show Dogs. (Another strike against Lady and the Tramp for making me utter the film-that-must-not-be-named.)

Superficially, Lady and the Tramp is harmless and cute, which may be enough for younger audiences to pay attention for over 100 minutes. (Confoundingly, like The Lion King earlier this year, Lady and the Tramp somehow found a way to become 30 minutes longer without adding much new material.) But like so many other live-action remakes, Lady and the Tramp is empty. It may even be more obvious in Lady and the Tramp because the stakes and scope are so quaint in comparison to something like Aladdin. Once again, you see the iconic Italian dinner in the moonlight between Lady and Tramp, chock full of all the dog cuteness that you could hope for in a live-action recreation of one the most famous animated scenes ever put to screen, but it’s exactly that: the same scene repurposed for an underwhelming imitation of a film.

From the first shot, which is a slow, deliberate zoom in from above the treeline down into Jim Dear and Darling’s home, Lady and the Tramp immediately coaxes the brain into perpetual autopilot as it stubbornly sticks to a formula that was never complicated in the first place. Maybe the barriers to entry and expectations attached to the film are far lower with it being on Disney+ instead of in theaters, but given that Disney isn’t far away from owning the rest of Holywood, there just has to be something better to stream than this forgettable work.

Thank you for reading! What are your thoughts on Lady and the Tramp? Comment down below!

[…] know there is a bigger discussion about Hollywood and their remake obsession culture to simply take money from us. The Grudge (2020) is sadly one of those attempts. I am ok with […]

Over all I was quite dissatisfied with this live action remake.

Besides the fact that they deleted the “We are Siamese” song with a bland song that…well…it rhymed. But it was a huge let-down. I liked the movie, but I’m with you: it wasn’t much to write home about. It will be forgotten, whereas its original will not.

I think I’ve already forgotten about its particulars! lol!