‘Ford v Ferrari’ is a Thrilling Ride to The Finish Line 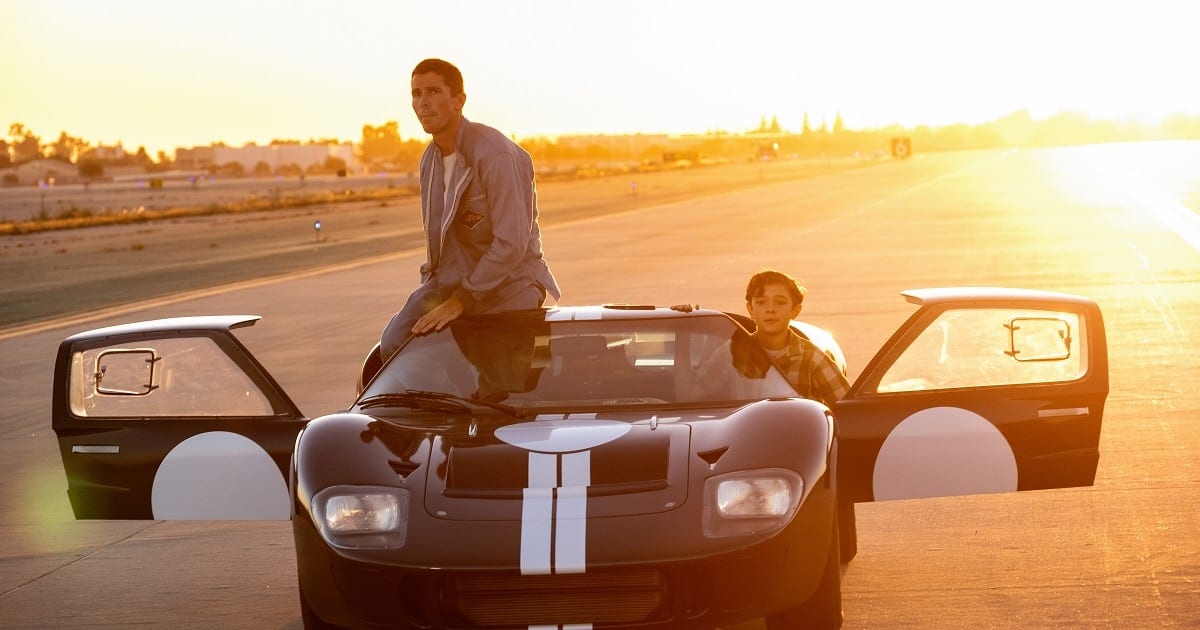 Riding out of Telluride, TIFF, and LFF with high-praise, Ford v Ferrari finally races its way into cinemas, along with it, bringing a herd of “dad movie” comments on Twitter. It may feature cars, sturdy men and masculine personas — a dad’s favorite combination of aspects — but it’s by no means just a dad film.

In many ways, Ford v Ferrari is an underdog story. No one expected Ford to take the Le Mans title from Ferrari (four years in a row), let alone build their own racing division. On the brink of going out of business, and having a purchase-deal rejected by Enzo Ferrari, the Ford Motor Company — led by Henry Ford II — decide to open up their own racing division to build a car that can beat Ferrari and win the 24 Hours of Le Mans. They hire a former racer — 1959 Le Mans winner and American car manufacturer, Carroll Shelby (Matt Damon), who in turn enlists the help of hot-tempered British racer, Ken Miles (Christian Bale).

Heading to 1964 Le Mans without Miles — who they see as an unideal fit for the company — they never manage to cross the finish line. Forwarding to 1966 — on the terms that he wins Daytona (he did) — Miles joins the Ford team to race at Le Mans and goes on to lead the race. With all three Ford cars in the top three positions, Miles is ordered to slow down for a three-car photo finish. Reluctant at first — setting new lap records near the race’s end — he eventually gives in to the command, letting Ford have their way. Unbeknownst to Miles before capitulating, McLaren would be declared the winner (on a technicality), due to him finishing the first lap first — robbing Miles of his win.

Miles is the underdog in this tale. It chronicles his battle against Ford to prove that he can lead a racing team and win Le Mans for them, despite their distrust in him due to his hot-temper and unorthodox methods. It’s about Shelby and Miles attempting to keep control of their designs and strategies to wins Le Mans while dealing with the authoritative pressure of micromanaging executives who want to ensure that the pair obey their decisions and rules. And in the end, Miles is robbed of his well-earned victory at the 1966 Le Mans. Though not seeming overly bitter over it, expressing to Shelby, “you promised me the race, not the win,” Miles was undeniably robbed of an underdog win — one that would propel Ford into winning a further trifecta of wins at Le Mans – being the only American manufacturer to win the reputable race.

It’s a win Miles would never get the chance to reclaim due to his shockingly sudden death two months after Le Mans, due to a brake failure that results in his fatal crash, while testing the J-car at the Riverside International Raceway. Though Miles would posthumously be inducted into the Motorsports Hall of Fame of America in 2001. 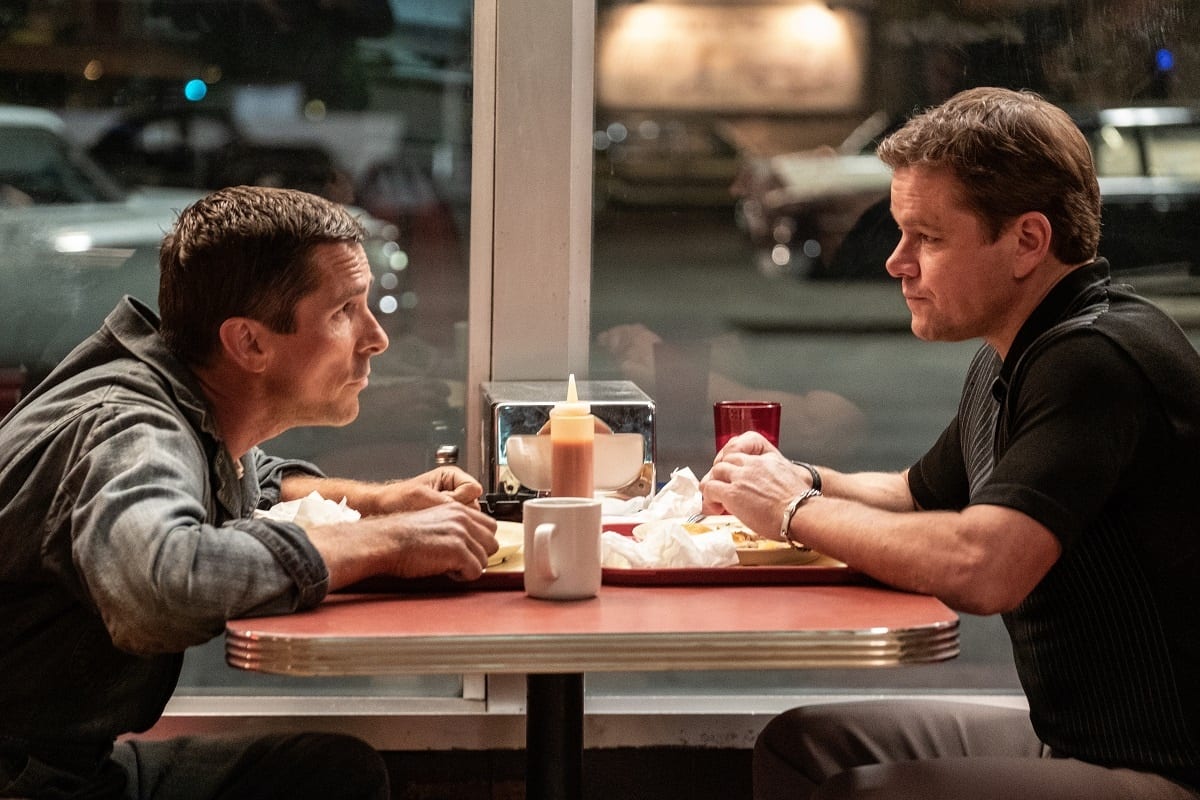 Ford v Ferrari’s understated underdog tale also rings true, as a metaphor, to modern-day filmmaking. The metaphorical context of Mangold’s film can be associated with the struggle of artistic control, freedom, and integrity within the film industry. This refers to the conflict of keeping artistic vision over a film while having to deal with the constraint and demand of micromanaging executives who dictate the way these films are made and insist on directors meeting their demands on what the film should be like, instead of leaving the artistic control in the capable hands of the director who is crafting the film.

Talking about understated aspects leads us to Matt Damon’s performance; it’s astute, definite, and restrained. Out of the two leads, Damon’s performance is the more limited, closing his character down to finely delivered lines and controlled emotions. Throughout most of the film, Shelby represses his recollections of driving professionally and winning Le Mans, feeling repentant over his inability to race professionally anymore due to his heart condition. However, at the end of the film, following Miles’ unfortunate death, Shelby finally sets loose and drives ludicrously into the distance, after checking up on Miles’ son, Peter (Noah Jupe).

As impressive as Damon’s subdued performance may be, it’s Christian Bale’s showier performance that steals the show and truly captures the hearts of viewers. Bale always shows up, and never fails to disappoint — this is no exception. His irritable, ill-tempered performance as the irascible but passionate Ken Miles is absolutely incredible and stands out as one of the best performances of the year. It’s such an impassioned performance by Bale, that feels so real as to feel historically tangible with the real-life character of Ken Miles, but also very unfeigned and affecting. The scene in which he loses his victory at the end is purely heart-breaking. The sense of disappointment and remorse on Bale’s face just paints the unjust picture of it all, without the need for any words. And once the rueful dialogue with Damon hits in, and Bale utters the moving line, “you promised me the race, not the win,” the scene becomes effectively heart-rending, and thoroughly moves audiences.

Another aspect that truly captivated audiences was Phedon Papamichael’s impressive cinematography. Standing out the most during the astonishingly-shot racing scenes, his cinematography was extraordinarily immersive, making the audience feel like they were at Le Mans — racing in the winding tracks, stationed in the packed pit, watching among the passionate fans (seated and stood) in the stands. From the starting point — where we get a point-of-view shot from Shelby’s perspective as he wins the 1959 Le Mans — it feels so fresh and creative with the way it captures the intensity and high-speed thrill of racing a car.

As of right now, Ford v Ferrari looks to be a serious awards season contender. There’s a high possibility, that come the Academy Awards in February, Ford v Ferrari will be competing not only in below-the-line categories like Best Sound Editing and Best Sound Editing but also for some above-the-line categories, such as Best Original Screenplay, Best Actor and possibly even Best Picture. Emerging as both a fan favorite and a serious awards contender, Ford v Ferrari is a triumphant race past the finish line for James Mangold and co., as they delightfully cross the lines between a cordial drama about friendship and a riveting film about the joys of racing.

Thank you for reading! What are your thoughts on Ford v Ferrari? Comment down below!

[…] me Ford v Ferrari here — its sound editing (i.e. the zooming cars, the throttle of the engines) is the main […]

Is it just me or does Christian Bale play a lot of brooding, edgy characters?