Which 2019 Oscar Nominations Deserve to Win? Take the Poll! 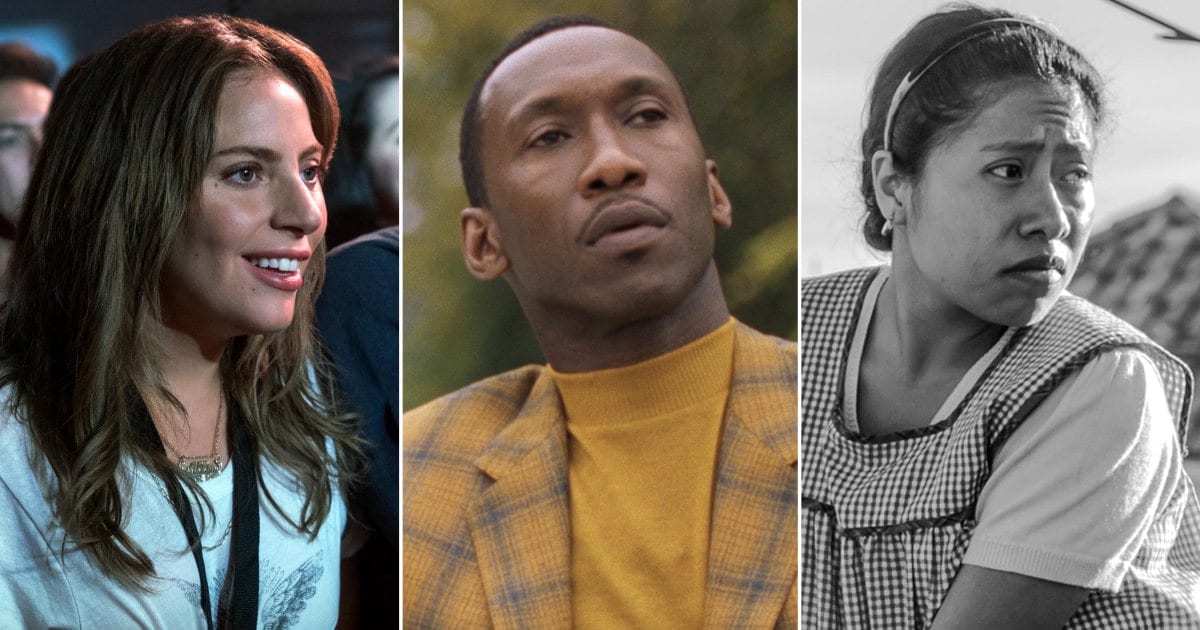 The 2019 Academy Awards are here, and I’ve already thrown multiple tantrums about how idiotic some of the choices are…but that’s besides the point.

The nominations saw Roma and The Favourite lead the pack with ten nominations a piece along with a surprising amount of love for Cold War. We even have our first ever superhero movie to get nominated for Best Picture! There’s was also a lot of love for the controversial Bohemian Rhapsody and Green Book, but those conversations deserve their own think pieces entirely. And no B Coops for Best Director? Maybe Warner Bros. needs to reconfigure their Oscar campaign strategy for future years.

Regardless, it’s time for your voice to be heard. Below are the nominees in each of the 24 Oscar categories. Vote for each film/person/song that you believe is worthy of taking home that lovely golden statue!

Nick’s Take: Regina King has been cleaning up at all the guild awards and took home the Golden Globe a few weeks ago, so I think this is her category to lose, and she’s my choice as well. But every woman in this category is completely deserving of the Oscar if I’m being completely honest. You can’t go wrong in my book!

Nick’s Take: This category was one of the few that didn’t have me looking frantically around for something to break. Good job, Academy! I’m pleasantly surprised to see Adam Driver, Sam Elliot, and Richard E. Grant here. However, all three of them are most likely dark horses. I see it as a two-horse race with Mahershala Ali and Sam Rockwell far out in front of the rest of the pack with Ali very far out in front of Rockwell. It’s Ali’s to lose, but my personal choice would have to go to Richard E. Grant.

Honestly, I kind of just want to hang out with these five people; they all seem like good hangs. Can someone arrange that for me?

Nick’s Take: It’s sad to see First Man earned just a few technical awards. Even more unfortunate, it’s not going to win here. My vote goes to Mary Poppins Returns. Regardless of how you feel about the movie itself, its sets are pretty incredible.

Nick’s Take: Umm, where exactly is A Simple Favor? Need I remind you all of how glamorous Blake Lively looked in that movie???? Ugh. I guess I’ll take Black Panther. Whatever.

Nick’s Take: Am I the one that’s still confused as to why this is the only category that gets three nominations? Every year it seems like a major oversight.

Considering that Christian Bale transformed into Dick Cheney for Vice, I think that film will get the win.

Nick’s Take: Personally, Vice felt a little all over the place, so my vote will be going elsewhere…and not to Bohemian Rhapsody, either. I see this as a race between BlacKkKlansman and The Favourite with The Favourite just sneaking out the win.

Sound Editing: The sound editor is responsible for all of a film’s sound elements, including dialogue, sound effects, automated dialogue replacement and more with regards to their creation.

Sound Mixing: The sound mixer ultimately determines how an audience hears everything in a film. The sound mixer must decide what elements to emphasize and which to tone down.

With that in mind, I hope A Quiet Place takes home the trophy.

Nick’s Take: I think Roma might be the sleeper here with how Alfonso Cuarón formed the world within his film, but concert footage in film relies strongly on sound mixing, so the two front runners here are A Star is Born and Bohemian Rhapsody. My vote goes to A Star is Born, and I have a growing sense that this is one of the few awards it can win.

Nick’s Take: Infinity War was like a splat of effects work with how many characters and action sequences it included. And normally, the most flashy film wins in these technical awards. However, given that the Academy is incredibly stuffy and snobby, they sometimes like to go with the movie with the title that sounds the least silly on a ballot. If you’re going by that logic, the leaders here are First Man and Christopher Robin.

My personal pick goes to First Man simply because you can never tell what is practical and what is CGI. That’s incredibly impressive.

Nick’s Take: It’s a pleasant surprise to see three foreign films in this category. Good for you, Academy! You did something refreshing for a change. Ultimately, I see this category as a race between Cold War and Roma with Roma taking home the award. Deservedly so, I might add, as Roma is one of the better looking films of the last few years.

Still, If Beale Street Could Talk‘s score by Nicholas Britell is the most moving and lyrical score I heard all year. (It’s a great score to mellow out to if you’re looking for some recs.)

Nick’s Take: Bao‘s the favorite here simply by being the short film that everyone has seen because it played in front of Incredibles 2. Quite honestly, it’s the only one I’ve seen as well. Bao wins by default. Apologies to every other nominee!

Nick’s Take: (frantically tries to find a slant because I haven’t seen any of these) Uh, uh, uh, uh…Fauve!

Nick’s Take: Check out my reviews for each documentary short to see where you can watch them. Hooray for availability!

The documentary shorts are always incredible harrowing and depressing, and this year is no different. My bet is on Black Sheep to take home the award, but my personal choice has to be End Game, which made me ugly cry far more than I’d like to admit.

Nick’s Take: You’re telling that Won’t You Be My Neighbor? wasn’t good enough to get on this list? Get out of here with that blasphemy!

Oh well, at least Free Solo is the most intense piece of filmmaking you’ll see this year.

Nick’s Take: Shout out to Paul Schrader for First Reformed, but the nomination will most likely be the unfortunate culmination for that particular project. My vote is on either The Favourite or Roma, although I’m fearful that the actual award will be given to Green Book in the end.

Nick’s Take: I was surprised to see so much love for Netflix’s The Ballad of Buster Scruggs throughout the nomination announcements. Good for the Coens! Those struggling artists that have never made anything insightful or interesting before finally have their calling card.

I kid, of course. Good on you Coens, but you’re definitely not going to win the award nor will I choose you for my personal pick. My choice is Barry Jenkins for If Beale Street Could Talk, and I think the Academy will go that way as well. If Beale Street Could Talk is arguably the biggest snub in the Best Picture category, so I think the Academy will reward Barry Jenkins here as an informal apology. After all, the Academy likes to take care of its own (i.e. those that have won awards in the past) so this seems like a logical choice.

Nick’s Take: It’s looking more and more certain that Glenn Close will win this award, which is…fine. I think she offers more of a standard performance that is elevate by awards talk with pundits saying that “this is her time to win!” My two favorites are Yalitza Aparicio and Melissa McCarthy, and I’m swaying towards McCarthy as my favorite performance of the year, regardless of gender. Her work in Can You Ever Forgive Me? is easily the best of her career, and I really want her to get recognition for it.

Nick’s Take: We can all agree that Ethan Hawke should be here somewhere, right? Say what you want about First Reformed as a movie but there’s absolutely no denying that Hawke is spectacular in it. Do better, various voting bodies!

Of the nominees, my favorites are Bale as the cantankerous Dick Cheney and Bradley Cooper as a drunk Eddie Vedder. I think I’m more for Bale, but like the presidential race in 2000, this is one is initially too close to call.

Nick’s Take: I’d be okay with any of these nominees winning the Oscar except for maybe Adam McKay. However, I think we all know that Alfonso Cuarón is the clear favorite according to many voting prognosticators. I happen to agree.

BOHEMIAN RHAPSODY is possibly the worst thing to ever win a thing. #GoldenGlobes

Just no Bohemian Rhapsody or Green Book and we’ll get out of this situation mostly unscathed. Mostly.

Thank you for reading! What are your thoughts on the 2019 Oscar nominations? Comment down below!

It won’t happen, but I think that BlacKkKlansman deserves to win Best Picture!

Definitely the most bizarre batch of nominations in a good few years? I’d love A Star is Born to sweep, but it’ll be lucky to walk away with anything other than Best Song. I’m also worried Malek will be rewarded for a pretty good impression of Freddie Mercury, rather than any of the other contenders for actually acting …

I agree there! I though Malek was fine, but there were so many other layers to other performances here.

Ohh no! 😂 please tell me you’re not a fan of Bohemian Rhapsody 😂😂😂

I am! To be completely honest with you, Nick, I thought “Bohemian Rhapsody” was a B rated movie but Rami Malek’s portrayal of Freddie Mercury was pure A class acting. He was brilliant and oh so credible. You can’t deny that.

I thought it was more of an impression than anything else, and I think it’s the writing’s fault for that. Didn’t really care for a single emotional beat, unfortunately

No A Quiet Place for Best Picture😣😭

Those best picture nominees sure are 8 strange ways to spell Paddington 2.

Am I the only person who thinks “Shallow” is an incredibly over-hyped song? It’s okay, but it’s not all that and a side of fries.

It’s definitely been overplayed too which certainly doesn’t help, but hear I ya! I can definitely see where the overhype would come in 😁