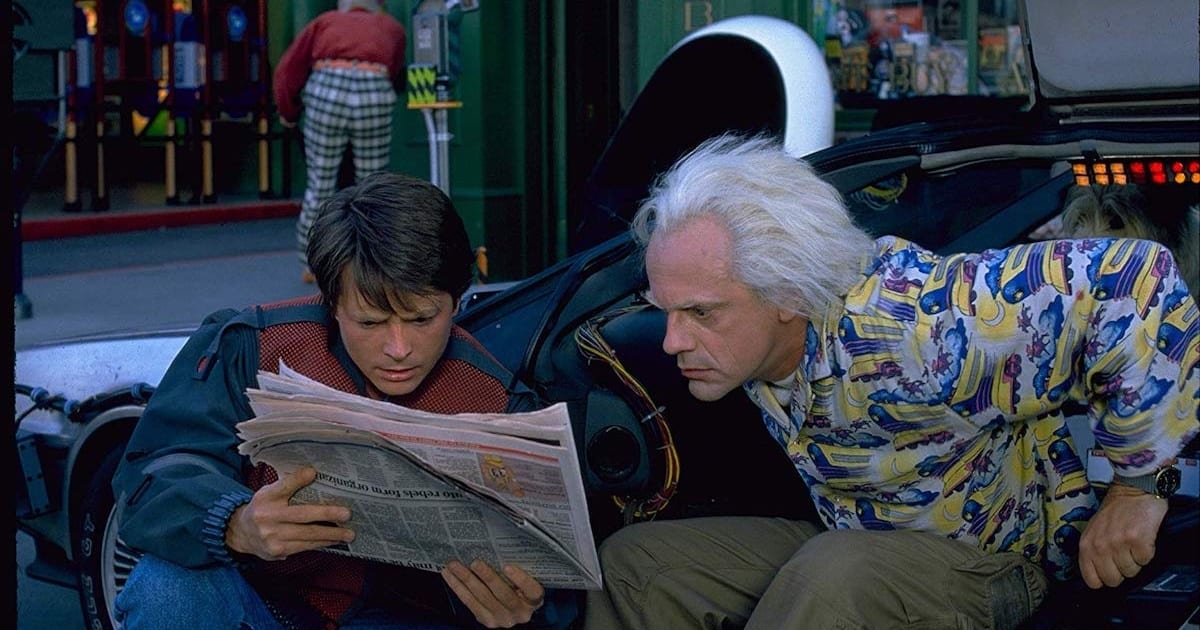 Back to the Future Part II is iconic, but that doesn’t mean that it’s a good movie. While it’s flashy visuals and its satirization of America’s future are fun, the movie itself is a mess. I’m sorry, but it’s true. Please don’t hate me, but allow me to explain why.

Marty McFly has one of the dumbest Achilles’ heels in all of moviedom. His weakness is being called “chicken”. That’s right, that is his actual weakness. While this fatal flaw is more prevalent in Part III, it’s introduced in Part II and so I’m holding this movie responsible. I’m not claiming that the characters were ever complex, but what nuance existed in the original is gone in the sequel. Marty, Lorraine, George, and even Biff are reduced to caricatures and parodies. The charm they exuded and pity we felt for them in the original doesn’t exist in the sequel. The only reason we really care for them in Part II is that we remember caring for them in Back to the Future.

Back to the Future Part II is also responsible for establishing the trend in the sequel where they go back and mess with the events of the first movie. Nearly every time-travel sequel since then has fallen into this bland trap. Part of the reason why Part II isn’t on par with either of the other films in the trilogy is that it spends half of its runtime rehashing the events of the first film.

The interesting stuff isn’t explored fully. Marty’s walk through 2015 and his nightmare in the alternate 1985, make up only half of the film. While I love the plot of the original, I don’t like it any better from a different angle. Back to the Future Part II feels really bloated because we explore three different worlds, without ever getting to see any of them become fully realized and explored.

Crispin Glover was legitimately robbed by Back to the Future Part II. The actor declined to return for the sequel because he was not being offered pay on par with Lea Thompson. Though they played similar-sized roles, they didn’t earn similar-sized pay. Glover was not fully recast in the role. Instead, Director Robert Zemeckis and Producer Bob Gale decided to “borrow” his likeness.

Using a mold of his face taken for old-age makeup tests in Back to the Future, the crew created a mold for Glover’s face and applied it to another actor. The actor was also instructed to mimic Glover’s voice and performance so he could be passed off as the same actor. Even further, they referred to the actor as Crispin Glover on set and made a joke of the actual actor. To make matters even worse, Gale has spent the past three decades mudslinging Glover over his reaction to the events.

To hear more about the ordeal, I highly recommend Glover’s recent appearance on the “Inside of You” Podcast.

Back to the Future Part II is not a total dud. Despite its issues, there is still a lot of fun to be had with this movie. The first two acts in 2015 and Evil 1985 are some of the most fun you’ll have with the franchise. This is due entirely because of the way Zemeckis chose to satirize pop culture via the conduit of time travel. The problems we see with never-ending sequels, the problems we see in orange-haired businessmen, and the crazy amounts of nostalgia audiences crave are all lampooned to great effect.

Thank you for reading! What are your thoughts on Back to the Future II? Comment down below!

You know, at one point in my life, this was my favorite of the three films, lol!

Although your writing needs some polish, it’s a fascinating point of view from a younger generation who didn’t grow up with it (if I may presume). I had no idea about the Glover controversy. So to see a movie now, with many aspects of the filmmaking process freely available, along with actor’s accounts like mentioned podcast interview gives opportunity for a more balanced point of view.
I saw it as a teenager when it came out and the best thing about it in my was the trailer for Part III, that they filmed back to back. A revolutionary move at the time that’s being used since most notable by the likes of Wachowsky bros (now sisters) in Matrix 2 & 3 and Peter Jackson on LOTR and Hobbit trilogies.
Anyway I thought the movie was a mess upon initial viewing and I didn’t really get all the details of time travel. I was 14 at the time. Seeing it some years later I could follow it better, but I enjoyed the Part III considerable more. I’ll give it spin now to see how I feel, since I haven’t seen it for at least 25 years.
I do remember vfx being fantastic and as a young skater I dreamed about the hoverboard for years.

Or the best one. I think 3 is weak