‘Guillermo del Toro’s Cabinet of Curiosities: Pickman’s Model’ – Reality Is Just What We Tell Each Other…

We need a buddy cop movie where Crispin Glover and John Travolta team up as two cockney detectives! 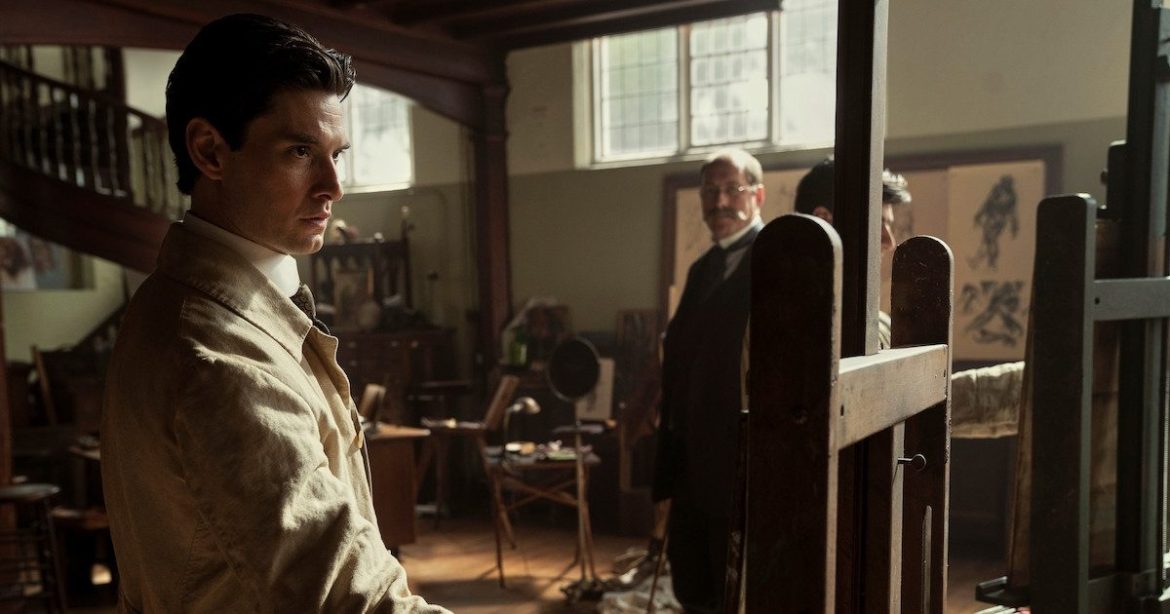 We cannot let sympathy or altruism shield us from finding the truths of this world.

Pickman’s Model is one of two H.P. Lovecraft adaptations coming this season on Cabinet of Curiosities, with Dreams in the Witch House released simultaneously by Netflix. I’m sure that if this show will be picked up for another season, which I hope it does, we might see an adaptation of At the Mountain of Madness, one of del Toro’s many unmade passion projects.

Pickman’s Model has already been adapted once for television in 1971’s The Night Gallery, hosted by Rod Serling. Having only watched a few episodes of The Night Gallery, I can’t compare the two adaptations, though I know del Toro is a huge fan of the show, hailing it as a major inspiration and even performing some commentary duties on a few episodes of the Blu-ray release of season two.

The sudden arrival of a new student, Richard Upton Pickman (Crispin Glover), seems to be the answer to this. When tasked to paint a nude portrait, William notices that Richard’s renderings are stranger, even macabre. Unsurprisingly, his efforts are rejected by the teachers, though Williams notes to Richard the specific teacher’s lack of imagination — Richard poignantly replies to William that this specific teacher seems fond of Richard’s work. Richard’s inspiration seems to be an interest in the darkness of the world — see the opening quote of this review.

When invited to Richard’s apartment one day, William witnesses a sinister painting of Pickman’s great-grandmother, who was burned at the stake for being a witch. This painting begins to have a disturbing effect on William’s psyche. Soon he’s haunted by the specter of the witch.

As time goes on, William realizes that what Pickman is painting, isn’t just part of his imagination, but the result of Pickman’s ability to see beyond this world, to witness the dark forces that are hidden from us. And that the more you expose yourself to this, the more these forces start to invade your world…

The particular story seems to have inspired 1994’s, underrated John Carpenter chiller, In the Mouth of Madness. But instead of paintings, it’s a series of books that shape the reality of its readers. The film would push this concept to apocalyptic heights, as we see the whole of American society being infected by the reality-bending madness of these books, while Pickman’s Model keeps it more low-key, focusing mostly on the mental deterioration of Thurber.

Even so, In the Mouth of Madness is so much better, not just because Pickman’s Model lacks that Carpenter charm. The reason why it works so much better is in how we see the internal change of its central character. In ITMOM, we see John Trent (Sam Neill), a cynical. no-nonsense insurance investigator, lose his sense of self as he fails to make sense of the supernatural phenomena around him. As the title suggests, the end result would eventually be madness.

Pickman’s Model tries to do the same thing, but we don’t get to see this gradual change. Rather it’s told by us from the mouths of loved ones, in how he seems to be mentally absent and drinks too much. You need that visual descent into madness to truly make this story work.

It’s true that the film had more time to do this. Yet, with a few poignant screenplay changes, perhaps in devoting just a little more time to getting to know Thurber before he glances at some of Pickman’s work, the result could have been so much more powerful.

While Ben Barnes is no Sam Neill (nobody is), his performance is nonetheless effective, particularly in one poignant scene where you can really feel his heartbreak.

But as to be expected, it’s Crispin Glover who steals the limelight. It’s a role that seemed tailor-made for him — though Jeffrey Combs would have been ideal too.

Admittedly, Glover was my main reason for reviewing this episode. There’s just something about him that always makes me smile, even if he sometimes appears in movies that are far beneath his eccentric talents.

His performance in Pickman’s Model is likely to turn off many viewers, as his performances did in films such as Friday the 13th: The Final Chapter, River’s Edge, and Willard. In Pickman’s Model, he has one of most hammy cockney accents you’ll ever hear, rivaled only by John Travolta in The Fanatic. It will be distracting to most, but I loved it. There’s such an earnestness to his performance too, this go-for-broke attitude, something common in nearly all of Nicolas Cage’s work.

On the horror side, Guest director Keith Thomas does provide some chilling moments, though it does get a little repetitive. There are a lot of “Oh, it was just a dream, OR WAS IT?” moments. These scenes are also accompanied by a lot of predictable jump scares. The most effective parts are the aforementioned paintings themselves, as you see these horrific images move on the canvas ever so slightly.

The attraction by the viewers of these paintings seems to comment on our morbid fascinations, similar to how people look upon the sites of horrific disasters or peruse endless true-crime documentaries. What if the problem isn’t that the abyss gazes back onto us, but that we are so attracted to the abyss, that we can’t just look away?

Keith Thomas only has two movies in his belt, the intriguing 2019’s The Vigil, and this year’s Firestarter. So far, nothing has been as good as his debut feature, but any of the flaws with Pickman’s Model is not the fault of his directing.

This episode goes beyond the ending of the original story. The final scene is gruesome, though not entirely satisfying. It’s not likely an episode I’ll ever feel inclined to return to. So far, it’s the weakest episode of this season so far.

But it features a bonkers Crispin Glover performance, so I can’t complain too much.

Thank you for reading! What are your thoughts on Pickman’s Model? Comment down below!