written by The MovieBabble Staff February 20, 2020 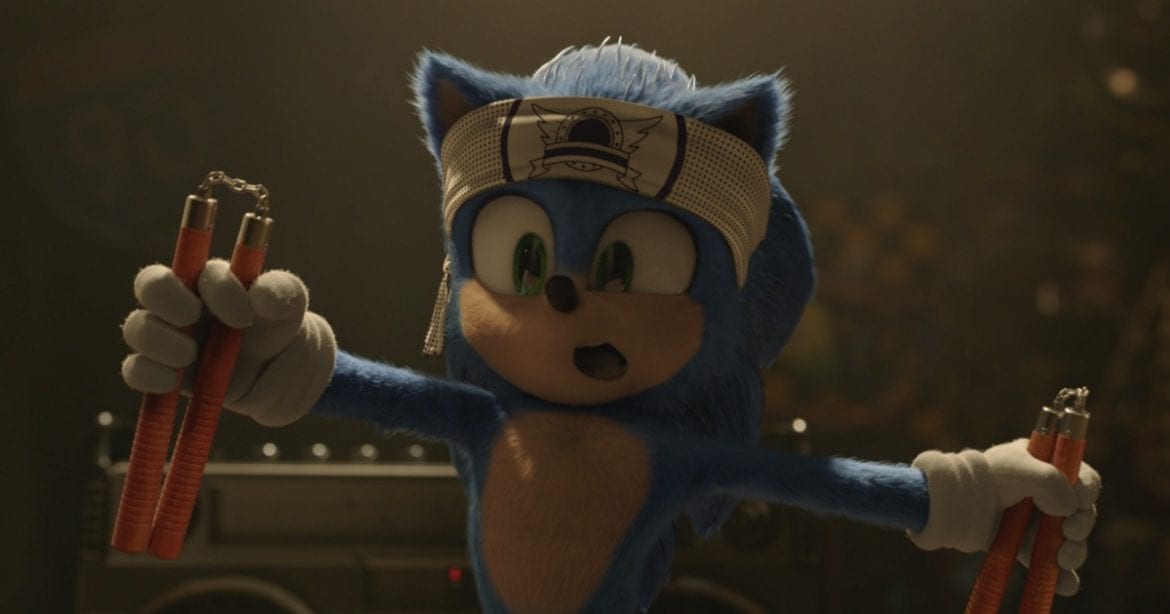 As we all know by now, the marketing campaign for Sonic the Hedgehog started as an all-out disaster with a terrible trailer displaying a humanoid Sonic in the middle of a movie that looked just as bad. Especially for Paramount, a studio that has had its fair share of bad luck recently, another big-time bomb might have been catastrophic. But director Jeff Fowler and a team of animators went back to the drawing board (literally) and rebounded mightily with a fresh character design and much-improved second trailer. For the most part, the general public was back onboard, and after one weekend in theaters, Sonic the Hedgehog is now one of the first breakout hits of 2020. Talk about a glow up!

Members of the MovieBabble staff break down some of the more noteworthy parts of the film in our Sonic the Hedgehog Exit Survey.

Anthony Labson: The overall best moment is the climax when Sonic finally achieves his full power.

Collin Willis: Sonic as a character. He was a lot of fun, and Ben Schwartz was clearly having a blast bringing him to life.

Hunter Goddard: The best moment is Doctor Robotnik chasing Sonic around the world — it feels the most like a level from one of the video games, and the Great Wall of China setting is particularly inspired.

Anthony Labson: The ridiculous dance number Jim Carrey did while he was hanging around in his truck.

Collin Willis: The Olive Garden gag. Why? Just why?

Hunter Goddard: The worst moment is the cheap fart joke in the motel room — younger viewers are smarter than movie studios give them credit for…

Is Dr. Robotnik a return to form for Jim Carrey, or are you not a fan?

Anthony Labson: I still say that Jim Carrey wasn’t a good choice for Dr. Robotnik because the look was never right, even at the end when he acquired his signature mustache.

Hunter Goddard: While the few moments that made me laugh out loud were all thanks to Jim Carrey, Doctor Robotnik is not as evenly characterized as some of his earlier, more memorable performances — by and large, he is hit-and-miss.

Let’s talk about that ending — are you excited for the Sega Cinematic Universe?

Anthony Labson: Considering the rocky start this film had in early production with the hideous design the first time around, the fact that the studio took the time to redesign Sonic shows a strong commitment to the character and possible future. So I am looking forward to this “Sega Cinematic Universe” if they stay this committed.

Collin Willis: Yes? I’m disappointed the Mushroom planet didn’t end up being a Mario reference though :(.

Hunter Goddard: The sidekicks are the worst part about the Sonic the Hedgehog games, but, with movie Sonic differing from game Sonic, maybe the filmmaking team will revise the supporting cast, too, such as making them likable.

The video game genre gets a bad rap. In your opinion, does Sonic the Hedgehog break the video game movie “curse?”

Anthony Labson: The video game curse was broken with Detective Pikachu and Sonic learned from that success and built on it. Video game adaptions got a bad rap back in the early days because companies that didn’t know anything about the content just slapped something together because they knew parents would bring their kids to see it anyway. Now those kids are grown-up, and some of them are possibly in the film industry. They know what the kids and the adults who grew up with these characters want to see.

Collin Willis: I think this is the third or fourth video game movie in a row “Critics Everywhere” said has broken this curse.

Hunter Goddard: Sonic the Hedgehog is inherently more “cinematic” than, say, the Super Mario Bros. franchise (which proved itself to be unfilmable with its own unwatchable adaptation), but there is too much-untapped potential left behind in Sonic‘s mythology for me to endorse Jeff Fowler’s interpretation.

Detective Pikachu is a mystery film and Sonic the Hedgehog is a buddy film — if you could pitch your own genre-bending video game movie, what would it be?

Anthony Labson: If I could pitch an idea for a video game movie, it would be a Mario Bros. remake. Even though I’m not a fan of remakes, Super Mario Bros. is one of the worst adaptations ever made and Mario is an icon in the gaming industry. Mario deserves at least one decent movie for the franchise now that we have the technology for solidly rendered animated films rather than just dealing in live-action.

Collin Willis: Pokemon as a monster movie. A handful of teens deep in the Kanto region jungles find themselves hunted by a mysterious new Pokemon. Or, a murder mystery where one of the main characters/the murderer is actually a Ditto in disguise.

Hunter Goddard: With its Outback setting, I’d like to see an Australian Western Crash Bandicoot a la The Nightingale (well… maybe not exactly like The Nightingale).

Thank you for reading! What are your thoughts on the Sonic the Hedgehog Exit Survey? Comment down below!

Make a Logan-style Shadow the Hedgehog movie with Joaquin Phoenix. Don’t tie it in with any cinematic universe what-so-ever. Just do a rough, beautiful, emotional tale about an older Shadow. Have Todd Phillips direct. Give him full control. Watch the box office explode.