‘Easy A’ is a Perfect Update to ‘The Scarlet Letter’ 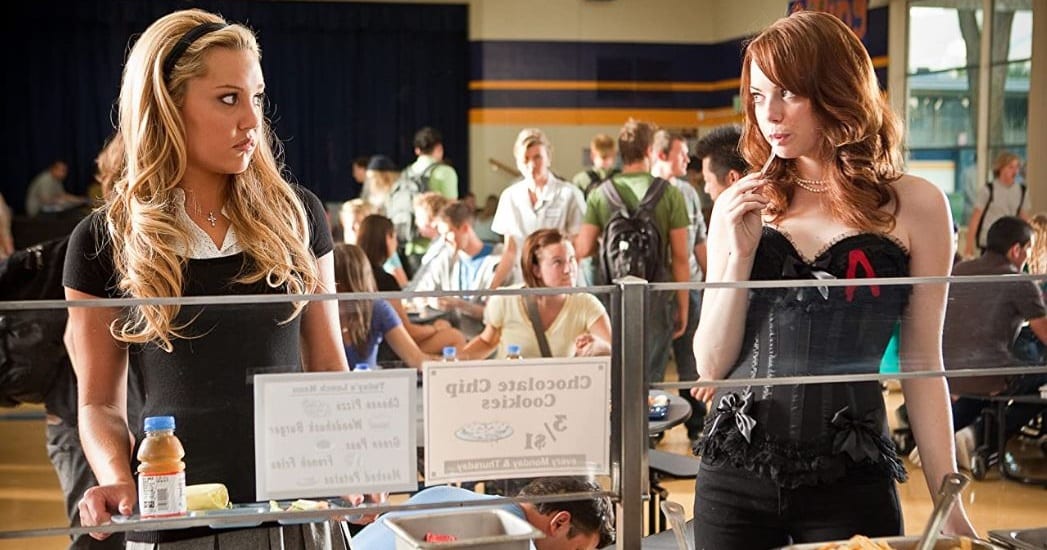 There has always been a double standard when it comes to what happens in the bedroom. Men can do whatever they want and no one bats an eye. Women, however, are bound to a strict list of rules. If for any reason, a woman should step out of line, she is given all sorts of unlikeable names. But, if she does stay within the boundaries that she is taught to obey, she is identified by another set of equally unlikable names.

Back in 2010, Easy A hit theaters. Following the trend in the late 1990s and early 2000s, the movie uses the classic novel The Scarlet Letter by Nathaniel Hawthorne as a narrative backbone. In a certain sense, the movie is your typical teenage romantic comedy with predictable story points, characters, and happily ever after ending. But in another sense, it is also deeper than I think the viewer expects for the genre; it points out the hypocrisy that comes with sex and the rules of sex.

The Scarlet Letter in High School

On the surface, it seems easy to adapt a beloved story to a modern high school setting. That ease comes from the fact that human nature has not changed and will never change. However, upon sitting down to write this screenplay, the ease may soon disappear. The allegory I like to use when adapting older narratives into a modern story is that any writer can transform a carriage from the 18th or 19th centuries into a fancy sports car. But it takes a gifted writer to rewrite this story in such a way that captures the magic of its predecessor.

I think what makes Easy A work is that it is not a beat-by-beat rewrite of its source material. Olive (Emma Stone) is not exactly Hester Prynne. Granted, a modern high school is not the same as the 17th-century pre-Revolutionary Puritan era Massachusetts. Olive is not thrown into prison and forced to stand in the public square for hours. But as anyone who went to high school can attest, the social experience of that time in our lives can be just as vicious as anything that Hester was forced to deal with.

Emma Stone on the Rise

The odds of making it in Hollywood are slim at best. For every performer who is able to build a solid career, there are hundreds, if not thousands, who ultimately have to find work elsewhere. Stone is one of the lucky ones. Her CV is not what one would expect for a woman who is only in her early 30’s. Between her roles as Gwen Stacy in the Spider-Man reboots,  The Help, Battle of the Sexes, and the Oscar-winning The Favourite, she has proven that she is much more than an acting one-trick pony.

For some performers (women especially), the traditional career path is the generic romantic comedy heroine. We all know her story. We’ve seen in it any number of variations for decades. Frankly, as an audience member, the character for the most part is boring. While there are a few standouts (Meg Ryan in When Harry Met Sally comes to mind), for the most part, this genre is predictable and frankly sometimes, mind-numbing. It also sends a message about what women are capable of and interested in, on and off-screen. I would rather see an actress stretch her wings as Stone has instead of re-watching what is essentially the movie version of beating a dead horse.

The Message is as Prevalent as Ever

Easy A is feminist at its core. It points out that even in the 21st century, the ideas that we have about sex still have a hold on us. But the audience is not hit over the head or forced to sit through an academic-style lecture. We are treated to a cheeky, charming, and intelligent film that challenges both the characters and the audience to think about how we judge women who do not adhere to the traditional rules of sexuality.

The Scarlet Letter is one of those books that for many of us, was part of our high school and/or college English curriculum. But the difference between Easy A and its literary predecessor is that in our time, we can examine and dismantle the extremely thin tightrope of women and sex. Though the hypocrisy is loud and clear in the novel, it becomes a calling card that allows it to stand out from other films in the genre.

High school has been a fertile ground for storytelling for countless writers. The number of stories and/or characters that exist within this world is endless. That being said, it is up to writers to ensure that they are creating new work and not rehashing what has been done before. Fortunately, for us, Easy A has just enough of the genre to be familiar with a narrative twist that is new, different, and entertaining.

Thank you for reading! What are your thoughts on Easy A? Comment down below!

[…] experience is often depicted on screen as either excruciatingly idealized, where every 16-year-old is preened to perfection, or a never-ending slog without any light moments or […]

One of my favorite movies of all time. People who haven’t seen it may write it off as, “another high school movie,” but as you said, there is a lot more to it.

I quite enjoy this movie. Unfortunately, now “Knock on Wood” is stuck in my head. 😄

Both in Life and in Death: A Tribute...