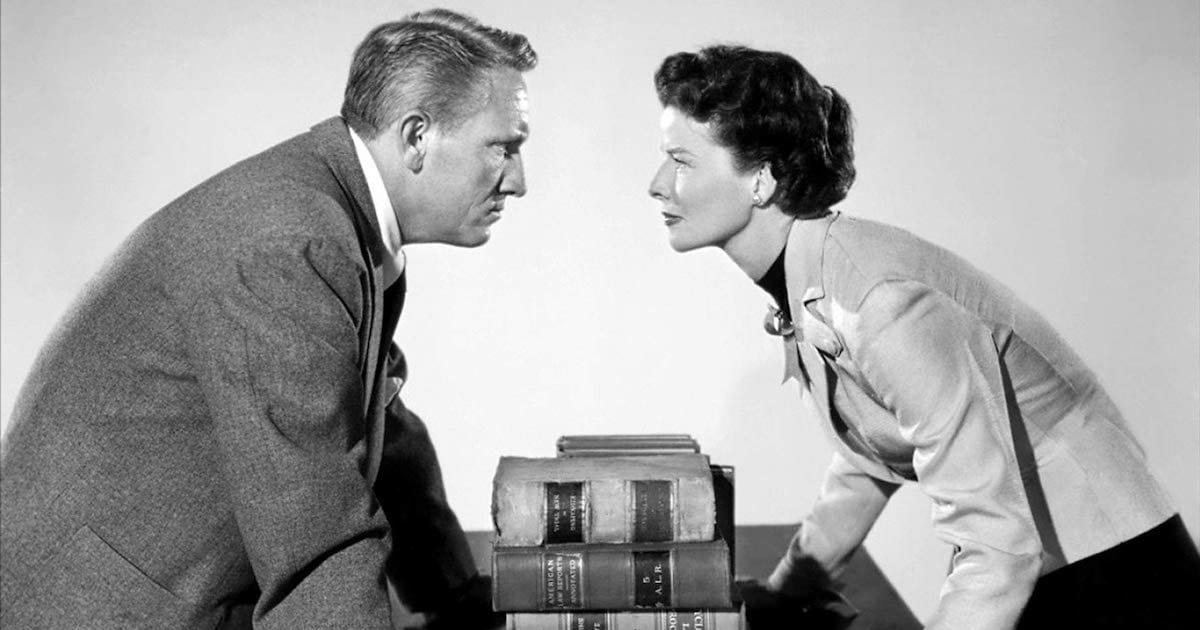 I 100% know that the title alone has done one of two things: driven away potential readers or hooked in interested browsers. If you are of the latter group, welcome to MovieBabble! Here, we try not to push any particular agenda but there are times when we have to talk about the agendas that movies themselves push. Today, as we take a look at Adam’s Rib (1949), is one of those days.

However, Adam’s Rib’s feminist agenda is much less annoying and far more thoughtful than some of the agendas in movies today. It has a twist of comedy and slapstick gags, but it also examines both sides of an important issue: the difference between men and women. On this fine movie’s 70th anniversary, I want to dig into what I thought was progressive for Adam’s Rib, especially for a film of its time.

Katharine Hepburn has always been a badass. She was often photographed wearing trousers in a time when it was not quite the proper trend. She stuck out as a spunky, opinionated redhead in all of her films. Most scandalous of all, she was involved in an infamous affair with Spencer Tracy. She wasn’t the role model most families wanted in their household at this time.

Adam’s Rib allowed Hepburn to air some of the most progressive feminist takes of Old Hollywood. In this side-splitting courtroom comedy, Amanda Bonner (Hepburn) sets out to defend a woman who shot her adulterous husband in front of his mistress. She focuses on something that is not often spoken of in early Hollywood: feminism and equal rights for women. In fact, the most significant part of this film is when she rejects a potential juror because he doesn’t believe in equal rights for women.

Adam’s Rib gave women a voice with its feminist narrative. Bonner challenges the double-standards set for men and women regarding marital infidelity and sexuality in general. She rejects those “rules” which society have set for women regarding the type of person they can be and the types of things they can do. Her most powerful quote, after a character tells her she doesn’t make the rules governing women in society, tells it all: “Sure you do. We all do…A boy sows a wild oat or two, the whole world winks. A girl does the same — scandal.”

At one point during the trial, the adulterous husband blames his wife for his infidelity, attributing it to her recent weight gain. There isn’t much else said about this part of the movie, but I find it telling that it shows the struggle it is to live up to beauty standards as a woman. As the husband says this remark, the camera pans to a clearly upset wife.

However, the film itself shows many types of women who don’t subscribe to the beauty standards of the time. One of the first examples shows up in the first ten minutes of the film. When we first meet the Bonners, they are waking up in their posh apartment. A maid knocks on the master bedroom door and Amanda Bonner walks out in pajamas. Though they are elegant pajamas, her face is less so. It isn’t caked in makeup like you would expect. Though it still has been painted a bit, you can tell that her natural beauty is what is mostly shining through, something women probably didn’t see much in Hollywood at the time.

Another part I love is when Amanda Bonner is questioning many different female witnesses. The first one she questions is very spinsterish and not much to look at, but we soon find out that she is extremely intelligent, holding many prestigious positions and university degrees. The second one is a burly woman who often performs in circuses. Though she, too, is not much to look at, her massive strength allows her to hoist Mr. Adam Bonner (Spencer Tracy) up on her shoulder (with a little help from some Hollywood magic of course!). Their performances demonstrate that there is more than one type of woman in the world, no matter what popular media says.

Katharine Hepburn takes charge in this film. Rather than playing the damsel in distress or the naughty housewife to Spencer Tracy’s no-nonsense yet witty lawyer, she is her own woman. At times, she is even more dominant than Tracy on the screen. Scratch that — every time she is on screen she steals the scene from all male counterparts.

Of course, this should be no surprise to anyone who has ever seen a Katharine Hepburn film. Take Sylvia Scarlett (1935). Hepburn acted alongside Cary Grant — in drag, at times — and still stole the whole movie from under his nose. She was ruthless and passionate in her dealings with her fellow man in the film and her personality came to life. The same occurs in Adam’s Rib — though she acts alongside veteran Spencer Tracy, she steals the whole movie right from under his nose with impeccable comedic timing and delivery.

The most important part of her character is her unwillingness to compromise her morals for anything — even love. Though she knows taking the case could ruin her relationship with her husband, Amanda takes the case because she feels a moral obligation to. At any point, she could have stepped down or at least toned down her impassioned speeches to the jury and the court, but she only amped them up to win justice. And that, my friends, is what makes her character so unforgettable.

Moral Agenda Wrapped in a Rom-Com

Adam’s Rib is essentially a moral agenda hidden with a film — just like The Color Purple (1985) or Philadelphia (1993). However, in this case, it’s not a drama — it’s a comedy. That’s what makes Adam’s Rib timeless; it’s a remarkable commentary on feminism and equality, but it does so in a funny, romantic sort of way. One does not feel like they have been lectured or bombarded with morality but rather feel as though they’ve watched a good movie.

And the reason it works so well is because of Katharine Hepburn. No other screen personality at the time would have been as strong as hers. Any other actress would have caved under the star power of Spencer Tracy, but not Hepburn. No, Katharine Hepburn was made of tougher stock than that. Instead of standing in Tracy’s shadow, she took a step forward and told Tracy to watch and learn as she empowered women across the world.

Thank you for reading! What are your thoughts on Adam’s Rib and its Feminist Agenda? Comment down below!

[…] is perfect (except for We Bought a Zoo, of course!) and Mangrove is no different. Similar to every courtroom drama, Mangrove can occasionally be predictable. The second half, which focuses mainly on a trial, does […]

Not in love with the film, but I did like how Hepburn’s character still truly cared about Tracy’s and was even sorry about hurting him at times, but still spoke her opinion. It was the balance that she aimed for that I admired.

I think that was one of my favorite things as well. She was strong but she wasn’t a jerk.

I love “Adam’s Rib” and, in fact, almost anything that Tracy and Hepburn did together. I much prefer a message couched in good humor than preached from a bully pulpit. Remember that delightful chestnut: “Ginger did everything Fred did, but backwards and in heels.”

I’ve never heard that quote before but I love it! Thanks for reading!