‘Yes, God, Yes’ is a Thoughtful and Often Hilarious Interrogation of Blind Faith 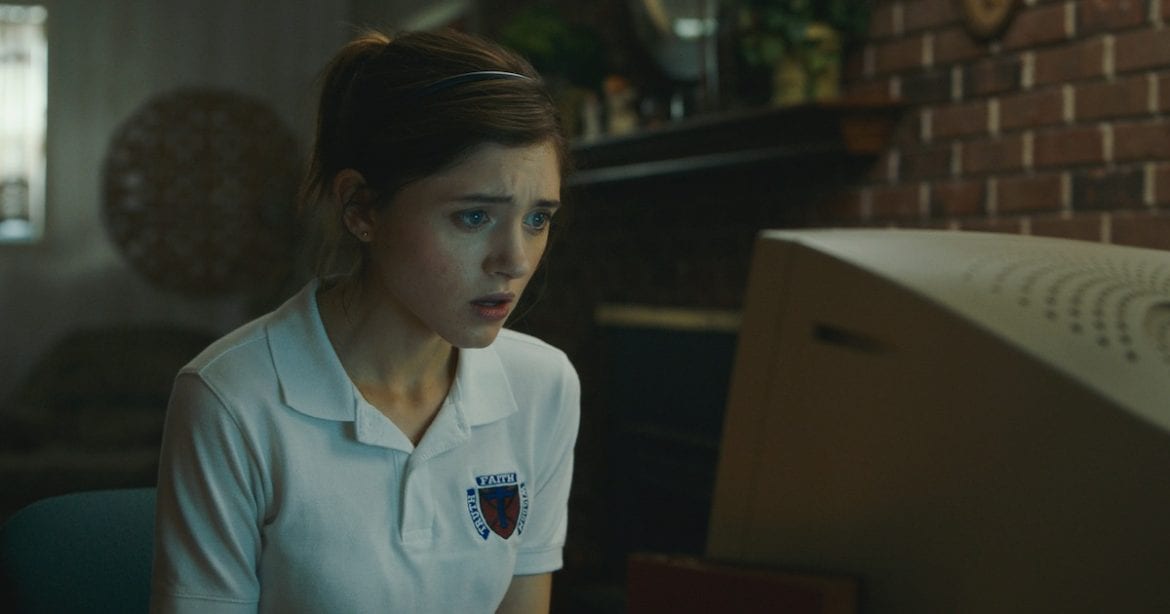 I grew up in a Catholic household, went to Catholic high school, and went to church every Sunday. So yes, Catholic guilt is coursing through my body every waking moment. Seriously, the amount of guilt I randomly feel while tending to everyday tasks probably isn’t okay, but that’s a conversation for another time (preferably a time when a therapist is around.) Needless to say, upon seeing Natalia Dyer’s Alice struggle with the most inoffensive of curiosities in Yes, God, Yes, I immediately felt a kinship with her.

Karen Maine’s directorial debut is one of those precious few films that feels like it somehow got into my brain and scooped out some of my own memories, twisting them slightly for hilariously entertaining effect. It’s amazing (and somewhat terrifying) to see near-memories pop up, but even better to see what Maine accomplishes with them.

Highschooler Alice (Natalia Dyer) is navigating teenage life in her Midwestern town, always working towards being the best Catholic possible. This means frequently delivering the gifts in school mass, being a church buddy to her dad, and generally living a “pure” life. But that all changes when Alice enters an AOL chat board and discovers masturbation. Or, more realistically, becomes increasingly fascinated by it, as it has casually been on her mind since she experienced a sexual awakening of sorts watching (and rewinding) the sex scene from Titanic. Something her devout friend Laura (Francesca Reale) consistently uses to ridicule her.

Simultaneously, an outrageous rumor is started around school that Alice tossed classmate Wade’s salad, which adds another level of slut-shaming to her already overwhelming sense of guilt. Even the faculty chimes in on humiliating her! Feeling a lack of guidance, she decides to go on the school’s next four-day retreat (entitled “Kirkos”) to live on what overeager counselor Nina (Alisha Boe) exclaims is “Jesus’ time”, meaning no phones, no watches, no connections to the outside world. And yes, I went on one of these retreats in high school too.

Yes, God, Yes takes place in the early 2000s, which delightfully adds to the film’s sense of innocent curiosity, especially in the inciting incident. Of course, Alice is going to respond to a possibly odd chatroom message from a person with a screen name “HairyChest1956”, she doesn’t know any better! And neither does she when it comes to other aspects of her life. Her exploration of newfound sexual impulses is playful and sweet, never lurid and entirely resonant. The concept of the male gaze is totally out of the picture. Through it all, Maine comments astutely on Alice’s repressive environment and the natural sensations she (and we) feel.

Natalia Dyer and the Rest of the Cast are Sensational

Although it has never been able to return to the heights of its first season, Stranger Things will be one of those shows we look back on decades from now and marvel at all the talent that came from it. Consequently, I’ve had high hopes for Natalia Dyer since first getting introduced to her as Nancy on the show; luckily, Yes, God, Yes is the best work of her career thus far bar none.

Dyer is darn-near perfect as Alice; I certainly can’t think of an actor who could have played the role better. Her success makes a lot of sense: she was the lead in Maine’s short on which this film is based. She seems very comfortable inhabiting this character, which is crucial considering many of the scenes are a super tricky balancing act of tone.

Maine undercuts what could be overbearingly earnest scenes with scathing commentary and wit, but each element compliments the other nicely. It makes for downright hilarious conversations between Alice and some of the other teenagers, my favorite of which is played by Wolfgang Novogratz, whom you may know from one of the many Netflix films he’s starred in over the last year. Novogratz is spot-on in his portrayal of the overeager retreat counselor Chris. Frankly, he’s scary good. He captures the robotic kindness of an overly religious teen in a way that’s hilarious but will also invade my nightmares as my brain unconsciously reverts to my time in Catholic school. 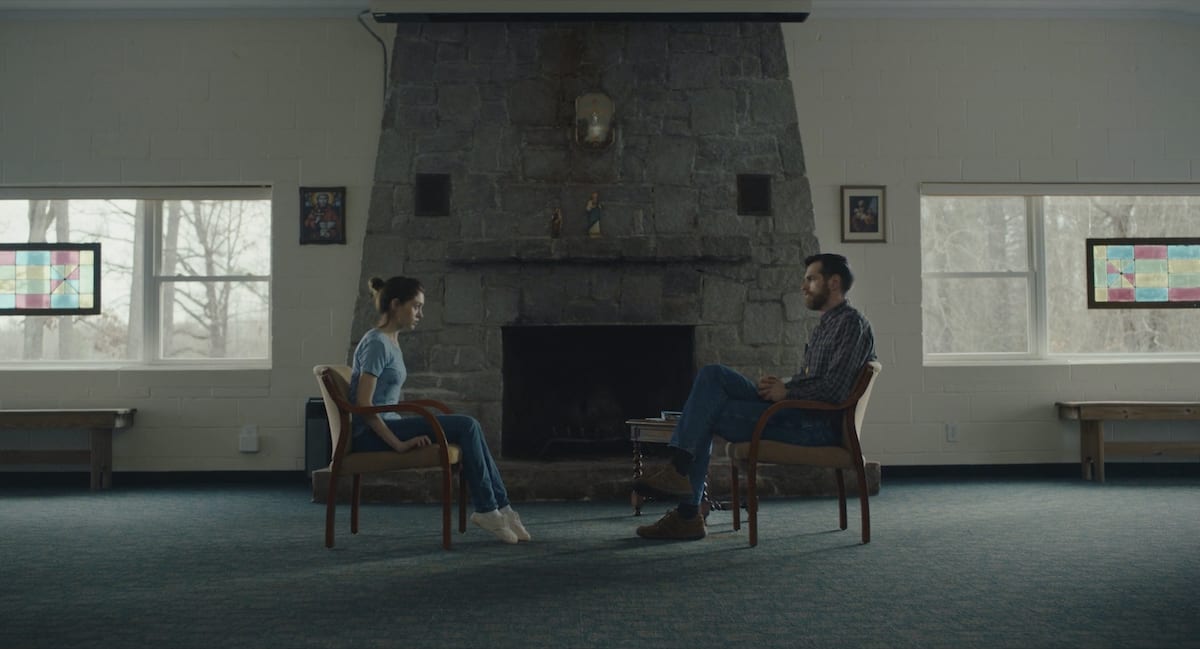 We’re All a Little Guilty

But for as funny as Yes, God, Yes is at times, it has plenty of truth behind it. The four-day retreat mirrors the structure many Catholics experience: question the first, weep the second, accept the third, and live the fourth. The last day being an emboldened call to live life through God and the lessons learned on the retreat. Intelligently, Maine uses this structure to underline Alice’s journey of self-discovery, which as you might guess, differs slightly from the teachings of the retreat.

Although Maine doesn’t necessarily condemn organized religion in the process, more so the cycle of fear and guilt that comes about from intense suppression. Yes, God, Yes may ultimately be about the importance of strong sexual health, but it’s most perceptive in identifying the hypocrisy within organized religions that have sex education classes which amount to a priest saying, “God is always watching.”

As Alice begins to find herself over the retreat while also doing some damage control to her reputation, we see how many teens are more worried about the optics of their faith; they’re focused on the idea of appearing faithful due to intense shame, ready to put others down to keep their image intact rather than actually living the teachings of the religion. It becomes more about the pressure to conform to a rigid ideal.

Maine wisely uses the camera as an extension of Alice’s point of view. Crucifixes are almost always in frame, looking down from above like a disapproving stepdad. The desaturated, grainy picture indicates a strong level of detachment in the proceedings. (You know, the exact opposite feeling one should have when exploring their faith.) Alice is always under surveillance in one way or another.

The precision of Maine’s directorial choices is very impressive. Even when the film’s messaging threatens to become all too conspicuous, Maine never loses control. Her measured approach adds plenty of depth, and at a brisk 78 minutes, the film never threatens to drag. Her perspective is fresh, and I welcome her next project wholeheartedly. You can be sure I’ll be first in line like the good Catholic boy I am.

Thank you for reading! What are your thoughts on Yes, God, Yes? Comment down below!

[…] film. Like a great Bergman film, the film can be confrontational, as it muses about the problems of blind faith. But to me, that makes a great film. A great religiously-themed film doesn’t try to convert […]

[…] head or forced to sit through an academic-style lecture. We are treated to a cheeky, charming, and intelligent film that challenges both the characters and the audience to think about how we judge women who do not […]

Being a member of an equally strict religion, that guilt is real (though I’m still a strong believer). It’s a hard thing to escape! Loved this candid review about the movie and the themes it discusses

I’m still a believer as well! Which is why the struggle this movie deals with is so refreshing and thoughtful. Personally, it’s that struggle that I believe creates the strongest faith, regardless of religion. I see the movie more so as a condemnation of blindly following practices more so than a condemnation of religion altogether. I think that distinction is really important

I now need to immediately go out and watch this film, based on your review alone.