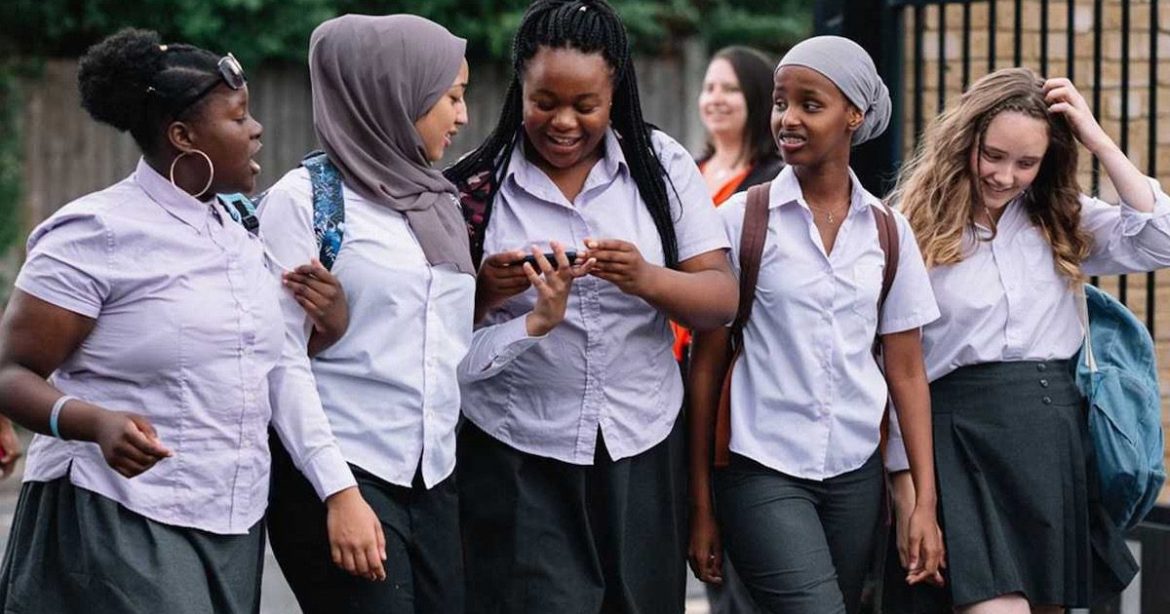 The teenage experience is often depicted on screen as either excruciatingly idealized, where every 16-year-old is preened to perfection, or a never-ending slog without any light moments or laughter.

Rocks is a joyful swerve away from these tropes, exploring the highs and lows of being a teenager, with dialogue and decisions from the young protagonists that convey the richness of the world of 15-year-olds.

Set in East London, Rocks tells the story of the titular Olushola AKA Rocks, (Bukky Bakray), a 15-year-old who is tasked with looking after herself and her younger brother Emmanuel (D’angelou Osei Kissiedu) when her mother abandons them. Leaving behind a short note about ‘needing to clear her head’ and some money in an envelope, Rocks is let down but not surprised by her mother’s actions. The film hints at previous stints of desertion through a phone call to Rocks’ grandmother who explains that some women aren’t ‘cut out for motherhood’.

Rocks goes to great lengths to hide her struggles from school, her neighbors, and friends. The morning her mother leaves, she carries on with life as normal. She takes her brother to school, jokes with her friends, and takes one of the lead roles in a dance class. However, in her quiet moments when she thinks no one is watching, the impact of being left on her own seeps through. Her mother’s departure starts to put a strain on Rocks’ other relationships.

The film shows her seeing the love and security that her friends have from their families and how at odds it is with what she and her brother have. To escape from these painful reminders, she distances herself from her group and befriends a new classmate from Nottingham, Roshe (Shaneigha-Monik Greyson), who encourages her to skip school and meet up with boys. The film subtly captures her uneasiness and attempts to fit in with her new friend who seems so at home in luxury flats, drinking lethal cocktails.

The director Sarah Gavron, whose previous features include Suffragette and Brick Lane, emphasizes the enterprising and creative nature of her lead. Rocks constantly has to devise ways to provide shelter and food for her and her brother, while avoiding social services (who’ve been alerted to her situation by a neighbor). Rocks shows the ways friends attempt to look after one another, and how someone’s best intentions can be a hindrance rather than a help. The underplayed reaction to a teacher’s off-hand comments about a girl’s ambitions to be a lawyer shows the damage comments can have on a teenager’s aspirations.

As well as the lives of the protagonists, Rocks also immerses you into the experience of being a teenager in a vibrant and multicultural city. Everyday moments like sunlight shimmering through the window during a top deck bus ride and the bright colors and bustle of an East London market show the magic and potential that city life can offer young people.

The film captures the highs of teenage life when friends are the most important thing and days are filled with easy conversation and food fights, and knits them seamlessly with the lows of shouldering the burdens of adulthood and the micro-aggressions from authority figures who appear to have little expectations of achievement.

The Young Cast Is Mesmerising

One of Rocks’ strengths is the collective preferences from the lead actors, who are all phenomenal. For most of them, this is their first on-screen performance but their energy and natural charisma overshadows seasoned stage-school actors of the same age. Much praise has been heaped on Bakray’s Rocks, which is entirely deserved. However, there are numerous standout performances, including those from Kosar Ali who plays best friend Sumaya, and D’angelou Osei Kissiedu as Rocks’ younger brother Emmanuel. Ali captures the complexity of wanting to give someone you care about support and space simultaneously, while Kissiedu steals every scene he’s in.

It’s drawn comparisons from films like The Florida Project and Fishtank which, like Rocks, have lead actors who were scouted rather than auditioned from drama schools. For Rocks, the collaboration on the creative process (the cast of teenagers worked with the director and screenwriter for a year on the story) creates dialogue and characters which feel effortlessly authentic. Rocks shows the unique power storytelling can have when you give someone with lived experienced the chance to tell their own story.

Without being overly critical, it looks at the various institutions that Rocks encounters and the ways they treat her and her brother. A confrontation with social services will leave a pit in your stomach long after the film has finished. However, the resilience and determination Rocks shows is a rebuttal to anyone who thinks teenagers ‘have it easy’. This is a heartfelt and compassionate look into the boundless potential of young girls in 2020.

Thank you for reading! What are your thoughts on Rocks? Comment down below!

[…] pertaining to different genres, including horror, Western, crime, science-fiction, coming-of-age drama. Some of these stories are absurdist pulp, others are genuinely moving. Usually, they are both. […]