‘Death of Me’ Is a Waste of Time for the Audience, But a Nice Paid Vacation for the Cast and Crew 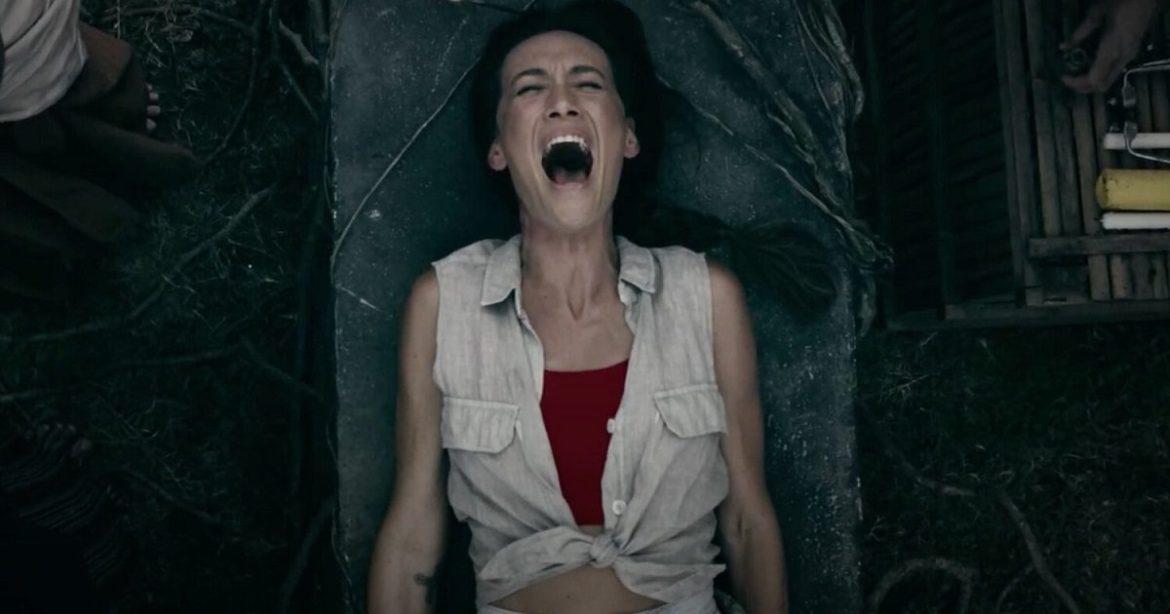 It’s not easy being a horror buff in 2020. By now, a lot of intriguing horror films should have already come out: from Spiral, the new Saw movie starring Chris Rock and Samuel L. Jackson; Antlers, director Scott Cooper’s first entry in the horror genre; Candyman, the promising new entry of the Candyman franchise, which similar to Halloween (2018), will be a direct sequel to the original and ignore the rest; and we shouldn’t forget Halloween Kills, the highly unnecessary sequel to the Halloween 2018 movie which was supposed to have come out this Halloween. Though, in all fairness, any of the follow-ups to John Carpenter’s original classic have been unnecessary.

We must do with what’s being streamed. For a genre stacked with cheap knock-offs and pointless sequels, it’s not easy finding a diamond in the rough. But when I read the premise of Death of Me, I was intrigued: a couple must find out the mystery of video footage showing one of them killing the other. I glanced at the trailer and it seemed okay, especially with the occasional genuine creepy imagery used in it. I hardly knew who was starring in it — I did know that one of the Hemsworth was in it. No Not Thor, the other one… No not Luke, the other one… Yes, that’s the one, the one from Westworld.

On a remote island in Thailand, Christine (Maggie Q) and Neil (Luke Hemsworth) wake up in their vacation villa, with no memory of what happened the night before. It seems they’ve had too much to drink. When retracing their steps, Neil looks into some of the previous night’s footage he made with his video camera. On the screen, they see themselves in a dive bar, being wasted and seeing their waitress spiking their drink with some mysterious concoction. Fast-forwarding to the end, they see themselves having violent sex, which ends with Neil choking and breaking Christine’s neck, and burying her body. All of this naturally prompts some questions. Christine soon begins puking grass and starts having the occasional hallucination. Christine ponders the nature of her husband and the event. Did this really happen or is it a premonition of the future? Did she survive somehow or is this some warped purgatory?

The hallucinations become more severe: she sees figures with their eyes and mouths sewn shut, pouring some dark liquid into her pupils while she lays on the ground, petrified, unable to fight them off. Many of the locals stare at the couple with vacant smiles. Have they become pawns of some sort of cult?

With their passports missing, they can’t seem to leave the island. Their investigation of the night before leads to dead ends and vague answers from locals. The eventual revelation will be inevitably horrifying — and for us viewers, deeply disappointing.

A major issue with Death of Me is that we don’t spend enough time with Christine and Neil as a couple. We don’t know who they are or how much they care for each other. This is why the possibility of Neil’s homicidal nature leaves us cold. He’s a blank slate. We didn’t see any indication of his affection for her, his tender side is unknown to us. For all we know, the footage of him murdering her could fit him perfectly well.

Their chemistry doesn’t invoke a long-term commitment to each other. In their scripted dialogue, there’s nothing to indicate a hidden language they share. No terms of endearments that are only known to each other. The tragedy of their relationship is lost in this story and because of it, the audience will likely not care about what happens to them.

Performance-wise, the actors are doing their best, but they don’t have much to work with. None of them get any interesting characterizations. Their reactions to the outlandish events don’t feel genuine. Rather than terrified, Christine reacts angrily at the world around her. Perhaps it’s done intentionally, not just to make her a victim, but it doesn’t make her feel realistic. With all that happens to her, we never see her completely crack from the pressure.

It’s Just Not as Creepy as It Thinks It Is

Director Darren Lynn Bousman, whom I know mostly from Kevin Bacon’s revenge vehicle, Death Sentence, tries his best to infuse an ominous atmosphere. He does this through droning music, filled with people chanting, accompanied by drone shots of serene nature. But it never creeps into your skin as it should. You never feel as uncomfortable as the filmmakers want you to feel. The tension simply isn’t there.

Part of the problem for me is that the film simply tries too hard. Maybe it’s the abundance of jump scares or the stylistic decisions — such as the camera footage with glitches that were obviously created in post-production — that makes it all feel rather desperate. A slower pace would have worked wonders as the audience would have had enough time to process the dread.

Some tiny moments work. One hallucinatory scene in which Christine finds herself in the middle of a muddy landscape sees people seemingly petrified beneath the ground (we see only the shapes of their bodies as they are covered with mud and dirt) who then begin to scream, genuinely works.

There’s also some gruesome gore, some of it particularly well-done. But it’s technical successes simply cannot make up for its massive flaws.

The greatest flaw of Death of Me is how it has squandered the potential of its premise. They could have gone in many interesting directions, but they settled on the most conventionally boring one.

There are early hints of what’s going on, and if you’re an experienced moviegoer, you can easily guess what it is. Guessing the twist and turns of the story doesn’t necessarily ruin a film — I guessed the twist of Shutter Island within five minutes of the film, and I still loved it. As long as it has enough substance to along with it. But the revelation, and the supernatural aspects to it, are annoyingly underdeveloped.

Death of Me is unfortunately is another derivative product of the genre. A film that seems to be an amalgamation of far better horror movies. There’s a little Rosemary’s Baby, a little J-horror, and more. But there’s not enough substance to make this stand out among the rest of the forgettable horror schlock.

At the very least, it looks great. If you like to see some beautiful nature shots of Thailand, Death of Me has plenty. A part of me wonders whether the writers wrote this film in a week just so they could have a paid vacation in Thailand. I can’t say I blame them if my outlandish claim was true. I just wish they made more of an effort on the script.

Thank you for reading! What are your thoughts on Death of Me? Comment down below!

Maggie Q is a decent actress, shame this seems to be the second disappointing horror film she is in this year