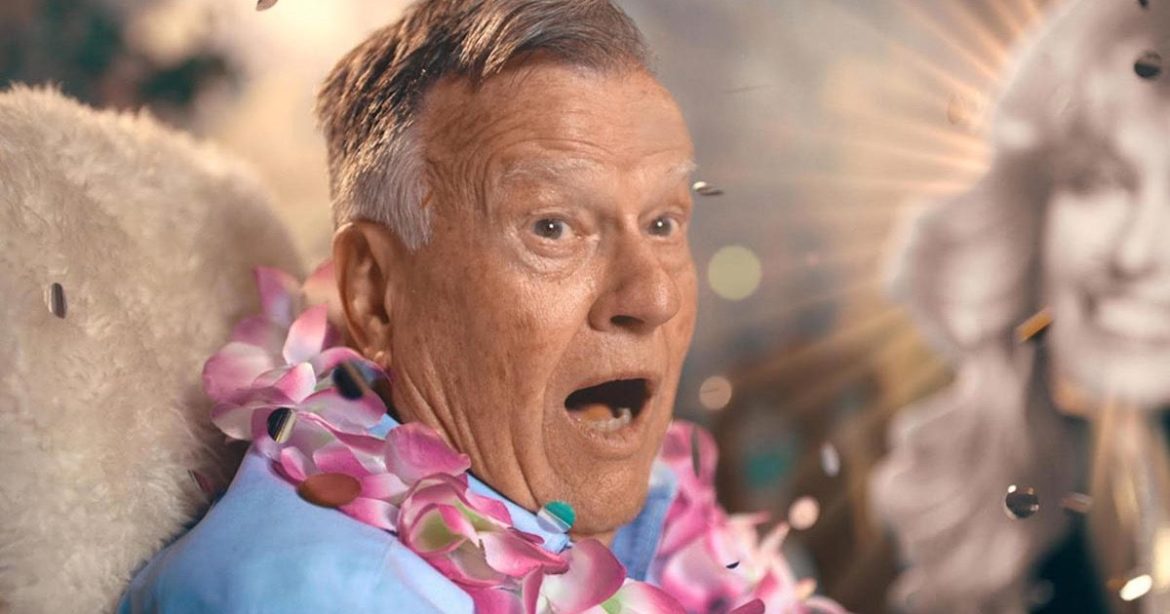 In 2007, filmmaker Kirsten Johnson lost her mother, Catherine (nicknamed Katie Jo), to Alzheimer’s. Johnson was struck by how little footage she had shot of her mother, despite being a cinematographer for many years. That realization nags at her. Some aspects of Katie Jo’s story now exist only in the memory of her husband, Dick. Unfortunately, those memories are being lost, as Dick faces a similar fate to that of his late wife. Kirsten is determined to capture every moment she possibly can this time.

After reading that introduction, you probably aren’t expecting a lighthearted film with quite a bit of humor in it. However, that is exactly what we get most of the time with Dick Johnson is Dead, a documentary that recently arrived on Netflix. To call this a unique film would be an understatement.

At its core, this is a movie about loss. Loss of loved ones, loss of memory, and the loss of independence. However, said core is wrapped up in layers of gallows humor, fantasy, faith, outrageous stunts, twists, and even some musical moments. It is unlike anything I have seen before. I so rarely get to say that.

I’ll level with you: I am an easy cry, especially when it comes to movies. I cry at sad moments, sure, but even more so when I find something touching, or relatable. It’s a good thing this was on Netflix, because I would have missed much of it, had I not been able to pause it and dry my eyes.

It is a film that is profoundly… human. At times almost uncomfortably intimate. The viewer is privy to some hard conversations between Dick and Kirsten Johnson, and there is an awkward feeling that goes along with that. It’s an emotional thing, being a fly on this wall.

Kirsten Johnson’s loving tone of voice in her narration also brings a tear to the eye. She clearly adores her father, and wants nothing more than to soak up every moment she can with him. As the film goes on, she becomes increasingly aware that her opportunities to do so aren’t all that plentiful.

On a lighter note, let’s talk about death. This film came about after Kirsten Johnson approached her father for permission to kill him. Multiple times. Believe it or not, this is the funniest and lightest part of the viewing experience.

Dick — aka: Dr. C. Richard Johnson MD — is a recently retired psychiatrist. In fact, he worked well into his 80s, when cognitive changes started to affect his ability to practice. Dick’s knowledge of psychology may account for his matter-of-fact approach to topics many people avoid discussing, and his willingness to quite literally laugh at death.

Kirsten sets up various modes of “killing” her dad. We see the death scenario first, then we are shown how it was accomplished. This involves a stunt team, and effects, both practical and computer-generated. It’s actually quite interesting to watch it all play out. The amount of input Johnson’s dad gets is also refreshing. He’s a collaborator with his daughter, rather than a powerless subject.

Everything here is done from a place of immense reciprocal love and respect. It is quite touching to witness.

This idea to kill off her dad cinematically is a sort of “pre-traumatic stress” treatment, Johnson says. To control something now that no one can steer in their preferred direction later.  Sudden and absurd fake deaths, to counteract the slow decline that is the unfortunate reality of diseases like Alzheimer’s.

The elder Johnson usually chuckles about these scenes of his fictional demise(s), but there are times he is, understandably, a little freaked out by it. He is refreshingly honest about his feelings throughout. When something is too much, they stop. There are also times he seems confused about what is happening (such as thinking stage blood was his actual blood), which brings the motivation of the film back to the forefront. It snaps us out of our reverie, as it does to the Johnsons themselves.

The focus comes back to capturing this process. To have this chronicle of life and death. Both real and imagined.

As much as I enjoyed Dick Johnson is Dead, and without giving away too much, I will say there is an aspect of it that bothered me. If you’ve already seen this movie, it’s the segment that begins just after Dick’s 86th birthday party. I thought some of that section was… I hesitate to say, “in poor taste,” but that’s the closest thing I can come up with. It didn’t sit well with me. It was presented too seriously to be taken as lightly as many other parts were.

The scenes featuring Dick’s best friend, Ray, were the hardest to watch. Upsetting, in fact. Then again, others may find no fault with this part of the film, and will tell me to lighten up. Those people may be right.

Something I wish had been explored a bit more is Kirsten Johnson co-parenting her twins with the couple next door.  I realize the director herself is not the focus of this documentary, and I also realize it’s not really my business. However, I have to admit my curiosity was piqued. A little Internet research may provide the answers I seek, but I think it would have been nice to address it a bit more in the film. This is really a nitpick on my part, rather than an actual flaw in the movie. Honestly, there aren’t many flaws to be found here.

In a cinematic landscape filled with offerings that sometimes feel super similar to each other, Dick Johnson is Dead stands out as a truly unique option. It is heartwarming, hilarious, hopeful, and well worth your time. Fair warning, though, your heartstrings will be pulled around more than a tap-dancing marionette. You might want to make sure you have a box of tissues on hand before clicking that play button. And maybe some kind of electrolyte drink.

Thank you for reading! What are your thoughts on Dick Johnson is Dead? Comment down below!

[…] talking heads in this documentary paint a charming picture of it going ‘viral’ before the internet existed. Mixed with […]