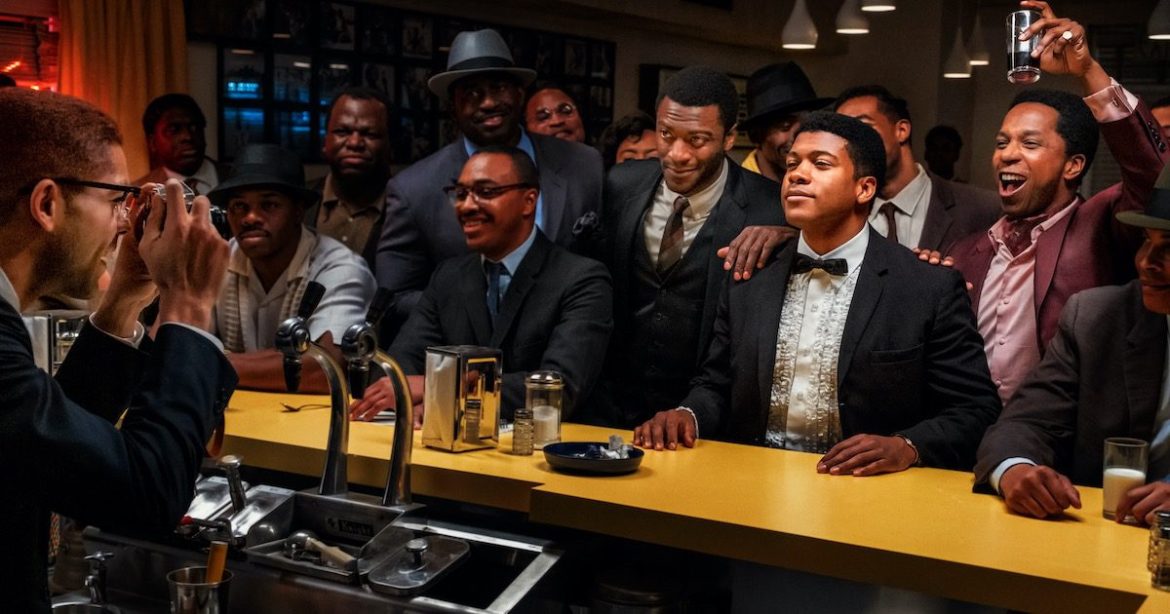 Regina King makes everything better, doesn’t she? Lately, she’s been on another level, winning the Oscar for Best Supporting Actress for her beautiful performance in Barry Jenkins’ If Beale Street Could Talk and quickly moving on to what many consider an iconic performance in HBO’s remix of Watchmen. Her feature directorial debut, One Night in Miami feels like her next big leap as an artist, announcing her not only as one of the most important actors of her time, but possibly a highly influential directorial voice in the years to come.

Based on Kemp Powers’ stageplay, One Night in Miami is predominantly one long conversation between Cassius Clay (Eli Goree), Malcolm X (Kingsley Ben-Adir), Sam Cooke (Leslie Odom Jr.), and Jim Brown (Aldis Hodge) in a Miami Beach hotel room on the night of Clay’s victory over Sonny Liston on February 25th, 1964 to become the Heavyweight Champion of the World. This meeting really did happen, although no one outside of the four men knows what was said.

Refreshingly, One Night in Miami is an ideas movie through and through. It’s full of enthralling conversation with each of the four men sharing their views on the responsibilities of Black leaders during the Civil Rights Movement. There’s plenty of evocation of Clay, Malcolm X, Cooke, and Brown in each actor’s performance, but their focus is mostly on the ideologies each man represents. (Thankfully, this isn’t Bohemian Rhapsody.) You can see the gears turning as the film struggles to fight its stageplay roots — a common pattern is someone making an abrupt theatrical exit for an inexplicably long time so a private conversation can occur within a subset of the group — but each discussion is full of complicated questions and layered responses.

Kingsley Ben-Adir and Leslie Odom Jr. arguably have the biggest roles as Malcolm X and Sam Cooke, and they handle them with ease. It’s difficult to say where Ben-Adir lands in the pantheon of actors to play Malcolm X, but he’s really, really terrific. Yet Odom Jr. might end up being a popular favorite given his part in the film’s astonishing final moments.

Eli Goree and Aldis Hodge are magnificent in their roles as well. Goree is excellent in evoking Clay’s unmatched charm, but also brings considerable weight to Clay’s anxieties in joining the Church of Islam shortly after this meeting took place. Hodge (who is turning into one of my favorite actors) is a perfect counterweight as Jim Brown. Contrasting the loud personalities that surround him, Hodge’s Brown is very measured — he won’t match Malcolm X in a shouting contest, but he doesn’t need to for everyone to listen. He also looks like a dominant NFL running back. (My god, those arms!)

So many films tapped as “prestige pictures” by their studios retreat to the past in an attempt to say something about today, but most fall back on the most fatally simplistic thoughts. One Night in Miami interrogates each idea, from how Black leaders should use their platform to how issues of colorism affect building that platform in the first place (and much more!). It also helps that Regina King is infinitely better suited to tell this story than someone like, say, Peter Farrelly. (Thankfully again, this isn’t Green Book.) For all the movies that use past events to say something about the current moment, One Night in Miami is one of the few that succeeds.

Thank you for reading! What are your thoughts on One Night in Miami? Comment down below!