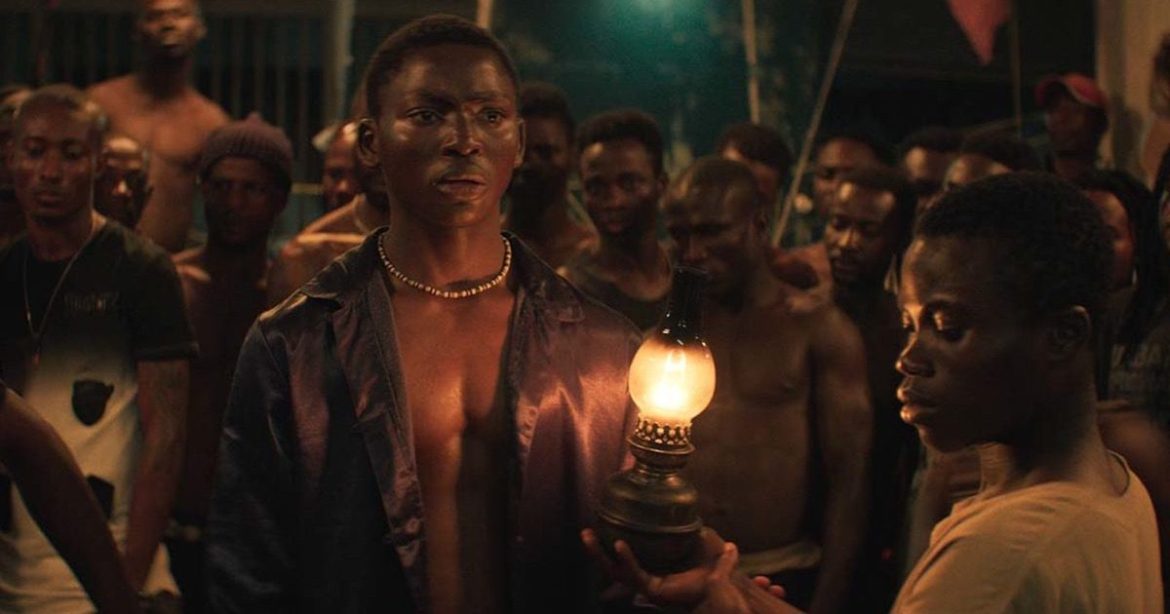 Ancient myth collides with modern society in Philippe Lacôte’s Night of the Kings, a film that takes place in the La MACA prison in Abidjan on the southern side of the Ivory Coast. The guards in the prison are more than weary, leaving the inmates to govern themselves with very little interference, peering at the factions of prisoners behind fortified walls. That leaves a prisoner known as Blackbeard (Steve Tiencheu) to govern the others. But his health is fading, and he knows his final days are upon him; as is tradition, he’ll have to commit suicide to make room for the next leader to take his place.

Concurrently, a young man dubbed “Roman” (Bakary Koné) by the prisoners arrives at La MACA. In Blackbeard’s final move as leader, he tabs Roman as the prison’s new Storyteller who, on the night of the red moon (a total lunar eclipse), must regale the rest of the inmates with stories until the next morning. Naturally, Roman is mightily confused as he is thrust in front of the others, but the lone white prisoner named Silence (the ever-wacky Denis Lavant with a chicken on his shoulder) warns him that he must continue until the sun rises, or else he’ll be killed. (Interestingly, this is a real tradition that takes place in La MACA, although thankfully no one is actually killed if they can’t keep the stories flowing.) The connection between Roman’s Storyteller position and the political jockeying occurring behind the scenes is tenuous at best (and very hard to follow), but the storytelling at the center of Night of the Kings is truly mesmerizing.

The inmates turn the tradition into live theater, with many leaping into the center of the frame to act out Roman’s words. The story itself is a pseudo-fairytale of the Zama King, the leader of the “microbe” gang which Roman was also a part of before coming to La MACA. He blends stories of violence Zama King caused throughout Abidjan with grand tales of how he descended from ancient African royalty. Philippe Lacôte’s filmmaking prowess shines as we see these collisions of ideas. Although it occasionally leads to some very bad CGI, the grounded fantasy elements are nothing short of entrancing. (The film’s climactic scene is extremely effects-heavy and leaves a few characters floating in place like they’re acting out Chrissy Teigen’s “Choose Your Fighter” Challenge video.)

The story begins to cave in on itself as Roman struggles to keep the momentum going, but the power of Night of the Kings comes from the act of storytelling itself, offering a dreamlike view of how African royalty and ancestry bleeds into present-day political turmoil in a country that is still at war with itself.

Thank you for reading! What are your thoughts on Night of the Kings? Comment down below!

‘The Shawshank Redemption’ is Nothing Short of Lightning...