‘The Prom’ Is Imperfect, But Full of Feel-good Extravagance 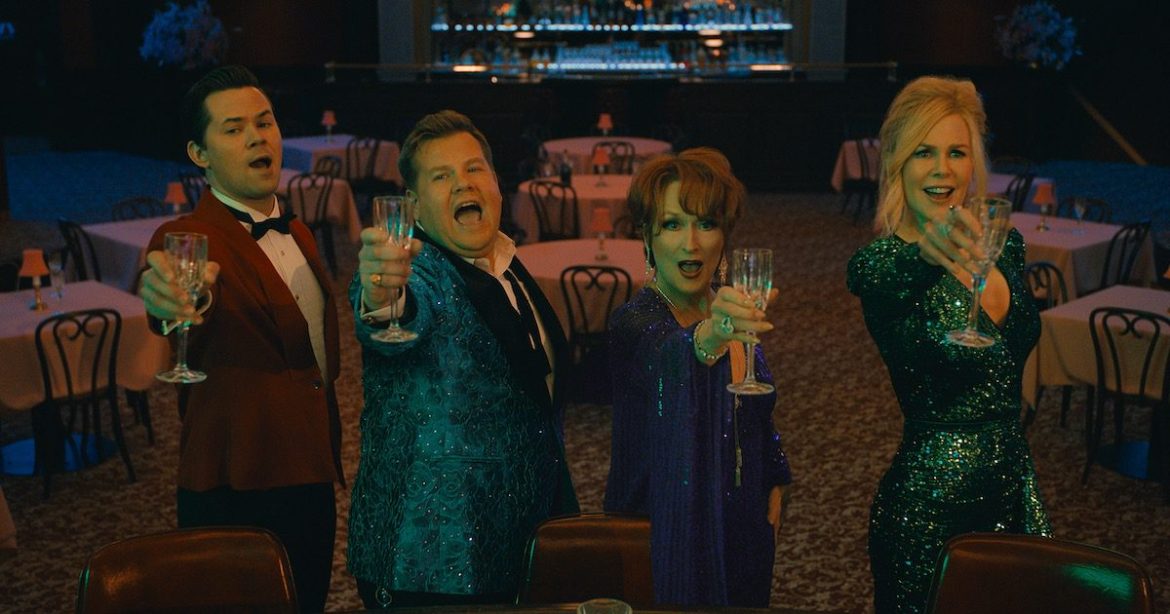 When it comes to musicals (and comedies, for that matter) things are very simple for me. Either I hate them with a passion, or I really like them. Indeed, there are some great classics (even Oscar winners) that make me cringe. On the other hand, I really enjoy Grease, and especially The Blues Brothers, which I rewatch regularly. The Prom belongs to the latter category. It’s certainly not a perfect movie, but I really appreciated its important message even if, unfortunately, some flaws are hard to ignore.

In the beginning, The Prom takes you to Edgewater, a small town in Indiana. The head of the PTA of the local high school (played by Kerry Washington) announces to reporters she is canceling the yearly prom. The reason? One of the students, Emma (Jo Ellen Pellman), wants to take another girl to the event. And that is against the rules! The head of the school (Keegan-Michael Key) clearly has a different opinion and promises Emma he will look for a solution.

Meanwhile, in New York, the premiere of a musical about the life of Eleanor Roosevelt takes place. The two main actors, Dee Dee Allen (Meryl Streep) and Barry Glickman (James Corden), are excited and giving gloating interviews to the press. When the final reviews are very negative, it is clear the two divas need to take some action. The barman who is also an actor, Trent Oliver, and chorus girl Angie Dickinson (Nicole Kidman) join the unhappy duo and tell them they should invest their energy in a cause. Thus, Dee Dee and Barry will become more popular.

By coincidence, Angie finds out what happened to Emma. The four quickly decide this is the cause they are looking for and with their publicist, they are off to Indiana. There, the students of the local high school are bullying Emma. After all, she is the reason there will be no prom. In the meantime, the four actors arrive and disturb a PTA meeting where they make their intentions clear. But after some time, it becomes unclear if Dee Dee and the others are there for Emma or their own reputation.

The Prom is based on the musical of the same name. Although I was thrilled about the main theme — the fight for equal rights for the LGBTQ community — some of the events are very predictable. The daughter of the head of the PTA, for example, happens to be Emma’s love interest, and she hasn’t come out to her mother yet. Dee Dee quickly falls in love with one of the other main characters, who happens to be a big fan of her work. And at a certain moment, Emma and her lover even break off their relationship. But as you can guess, all’s well that ends well.

I found the casting decisions a bit spotty. Meryl Streep is a magnificent all-around actress, but her Dee Dee could have used a bit more kick. She portrays a diva, but she is certainly not as arrogant as her character in The Devil Wears Prada. Nicole Kidman (who gets better and better every year) and Andrew Rannells (Trent) are delightful as is Kerry Washington who plays the head of the PTA. (By the way, I was not aware that Washington had such a powerful singing voice!) The real stars, though, are the teens, Jo Ellen Pellman (Emma) and Ariana DeBose (Alyssa). Pellman had some experience on TV, but this is her first film. Conversely, DeBose has a lot more acting experience. And, importantly, both girls are queer in real life. 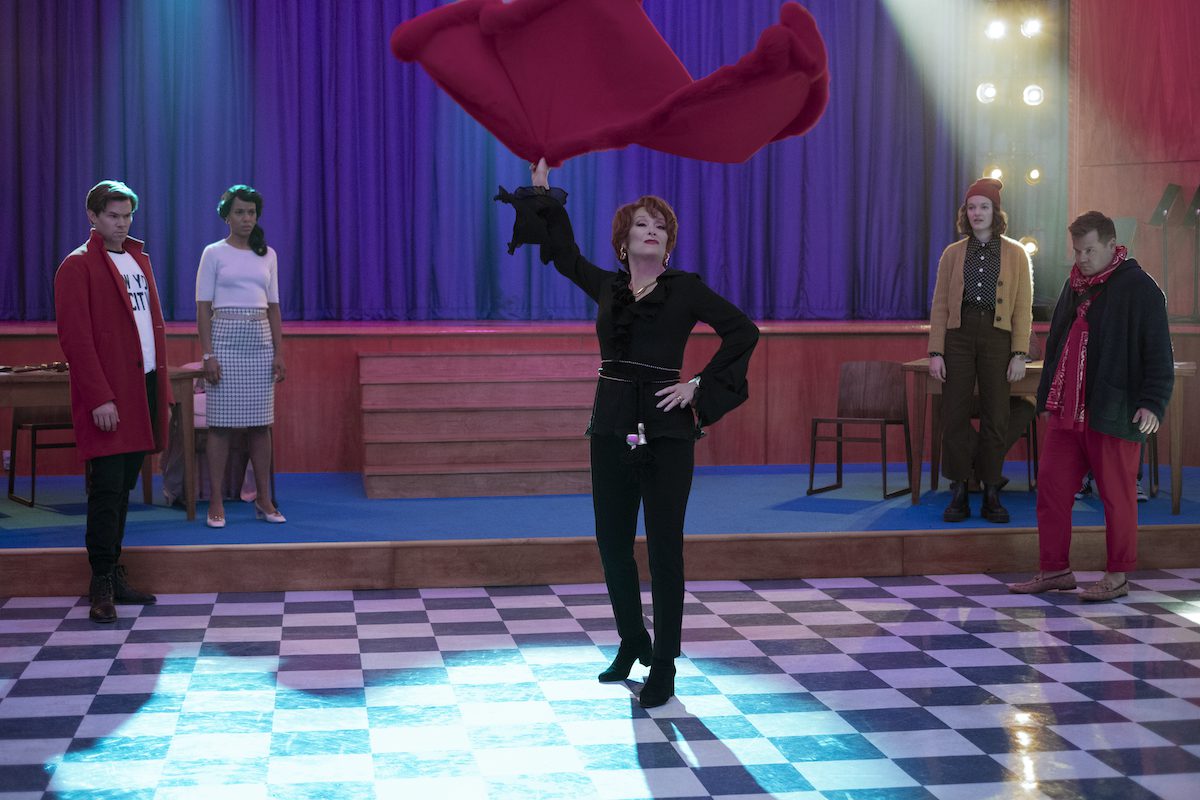 But the big issue is James Corden. I mainly know him as the host of The Late Late Show, but I had actually never seen him act before experiencing him in The Prom. His interpretation of diva Barry is not flamboyant enough and comes across as uninspired, even a bit dull. But the biggest problem I have with Corden is he is a heterosexual playing the role of a gay man. Aren’t there any homosexual actors with a good singing voice fit for the part? Surely there must be! It’s really too bad.

Notwithstanding the problems with some of the cast and the predictability of the story, The Prom is undoubtedly not a bad movie. Yes, it deals with a serious matter. But the film itself is heartwarming. It certainly has something to do with the enthusiasm the cast brings to the material. For all his faults, even James Corden seems to enjoy himself. The music and the songs are very catchy, and the end of the movie is simply magical.

The man responsible for all of this is producer, director, and writer (and now Netflix mainstay) Ryan Murphy, who is mainly known for TV shows such as Glee, Nip/Tuck, and American Horror Story. When it comes to movies, he also directed Eat, Pray, Love and The Normal Heart.

His version of The Prom is not perfect — surely not close to a masterpiece. But after a year of so much bad news and uncertainty, we need a feel-good movie. It will certainly get you in the mood for the holidays, which for a lot of people will be different than the usual Christmas period. With The Prom, you will be able to put your worries aside, at least for a short time.

Thanks for reading! What are your thoughts on The Prom? Comment down below!

[…] In Babel (2006), we see what happens when American authorities discover you have been working illegally in the USA. The scenes at the American-Mexican border are heartbreaking; and who can ever forget the harsh atmosphere of the deportation of the nanny. Director Fernanda Valadez goes many steps further. Leaving and/or re-entering Mexico can be a very dangerous and even violent experience. Identifying Features makes Babel look like a feel-good movie. […]

[…] achieve the Triple Crown of Acting: an Oscar, Tony, and Emmy. For me, she is the Black version of Meryl Streep. Both are all-around great actresses; they even acted together in Doubt, where she first caught my […]

[…] ‘The Prom’ Is Imperfect, But Full of Feel-good Extravagance […]

I love reviews of movies I’m on the fence about. This was one of those. I think I’m going to give it a miss. I love musicals but not many of the current crops appeal. I think my gut was right about this one for me. So, thanks. 😊

8 Romantic Moments to Put You in the...