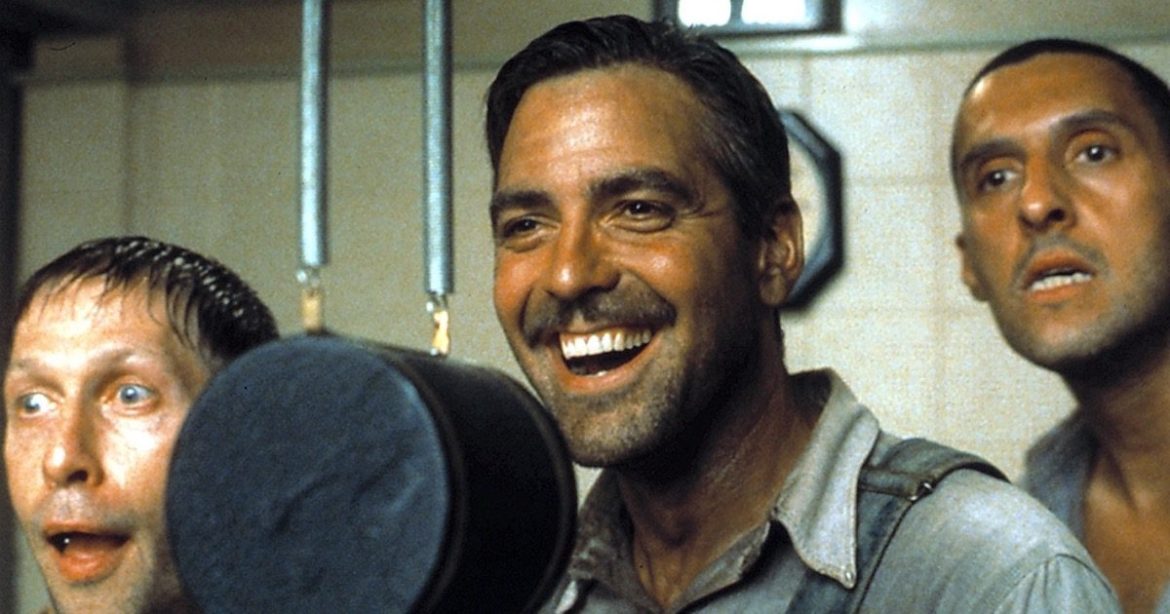 This may be a controversial opinion, but O Brother, Where Art Thou? is the Coen Brothers’ best film.

And there when I feel quite passionately about something, I find it helps to lay out the reasons why. So, in no particular order, here are some of my favorite things about O Brother, Where Art Thou?

I think this may be George Clooney’s greatest performance*. I’m serious. He fits the Coen Brothers’ style to an absolute T and they just know how to get a specific type of performance out of the man. Keep your Leatherheads. Keep your Up In The Airs. Keep your Batman & Robins. I’m taking O Brother every day of the week. He’s just able to convey the well-intentioned conman, saying whatever he needs to get where he wants to go. His performance as Ulysses Everett McGill is earnest and shameless, and I love every second of it.

John Goodman plays a KKK leading casual thief who gets crushed to death by a burning cross, and anytime I get to see either 1) John Goodman or 2) a Klansman made an absolute fool of and then killed in an ironic way, I’m quite pleased (see also Django Unchained).

“Obs-tackle”. It’s the only way I can read this word anymore.

While our boys Everett, Pete (John Turturro), and Delmar (Tim Blake Nelson) are on the run, they hear the song of beautiful women down by the river, who ply them with liquor until the screen fades to back. When we return, we see Delmar and Everett, but gasp Pete is gone!!!! All that’s left are his clothes, and buried in them, a toad.

Delmar, whispering: We thought you was a toad!

Delmar, whispering louder: WE THOUGHT! YOU WAS! A TOOOOOOAD!

Mythology in the American South

I truly believe the American South is rife with folk mythos to explore, and the Coen Brothers folding that into a loose adaptation of the Odyssey is a brilliant way to explore it. Speaking of mythos….

Chris Thomas King plays the character of Tommy Johnson, and amalgamation of the very Tommy Johnson and the far more mythological Robert Johnson.

The true story of Robert Johnson is that there is no “true” story of Robert Johnson. One of the earliest members of the 27 Club, what we know about him is sparse, save for this: at some point in the early 1930s, Robert Johnson was a traveling Blues musician of middling skill. He disappeared for about a year, and came returned with tales of gifts from the devil and a whole new way to play the guitar, and his recordings changed music forever.

This was only the third ever, and still the most recent, film soundtrack to ever win the Grammy for album of the year, and it’s not at all difficult to understand why. I could probably write an entire other essay talking about each of these songs and how they accentuate the scenes they’re in, but here are my top five favorites.

One of the only songs on the soundtrack that’s an original, contemporary recording from the era in which the film is set. Harry McLintok’s song was released in 1928, and he yearns with his tongue in his cheek for jails with rubber bars and hens that lay soft boiled eggs. It’s a great inclusion, and the texture of the recording nearly a century old really thrusts the viewers mind into the time period as we watch Pete, Everett, and Delmar escape the chain gang.

Ralph Stanley’s desperate acoustic pleading will haunt me for the rest of my life. He plays both a dying man and Death himself in this call and response song. With its placement in the scene revealing the KKK encampment set to lyrics like:

“Oh I am death, none can excel/I’ll open the door to Heaven or Hell”

Shifts the tone from one of lighthearted adventure firmly into tense horror.

#3: Didn’t Leave Nobody but the Baby

The harmony between Gillian Welch, Alison Krauss, and Emmylou Harris deliver this ethereal song in such a hypnotic fashion that it’s hard not to understand what drew the attention of our runaway convicts in the first place.

It had to be this. Alison Krauss is an angel, and every chance she gets to flex her absolutely unparalleled prowess is one I welcome with open arms.

*Michael Clayton may be a better performance. Still, “top two and probably not two” is a good place to be on the all-time list.

Thanks for reading! What are your thoughts on O Brother, Where Art Thou? Comment down below!

[…] from being little exposed to country music, there was another problem. It just didn’t ‘click’ for teenage me. I have always […]

It is my fav Coen Bros film too.