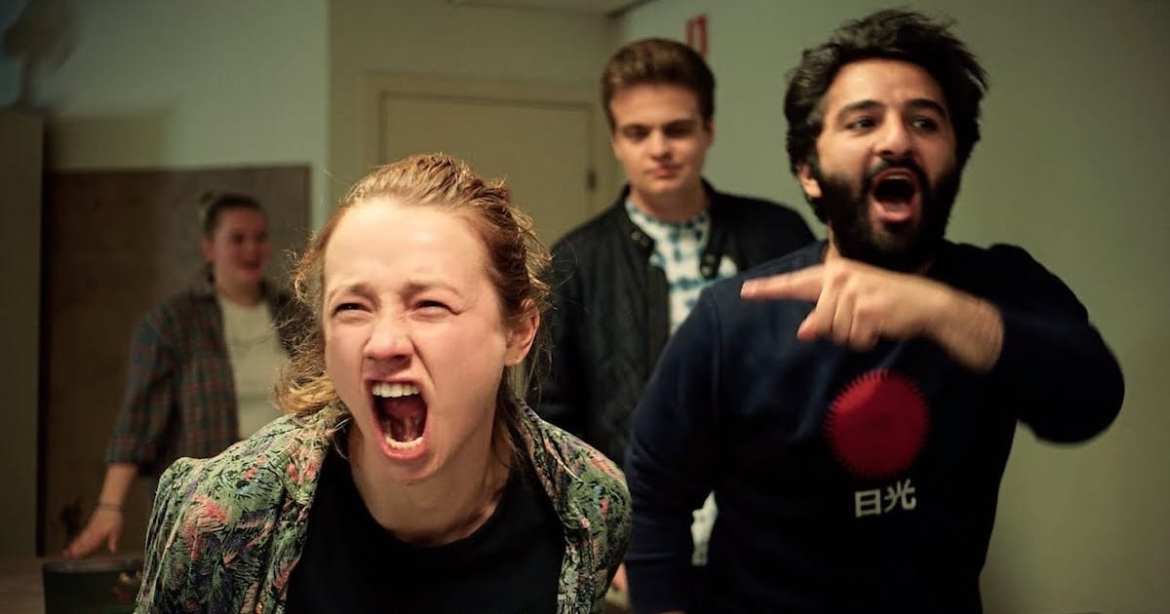 At this point, the age of Apatow and the Farrelly brothers ruling the comedy landscape by mixing gross-out comedy with sentimentality is long gone. Nothing has exactly filled the void, either — unless you count the dozens of low-budget rom-coms Netflix manages to churn out every month. Yngvild Sve Flikke’s Ninjababy is of a piece with those films — it’s full of raunchy humor, twenty-somethings stuck in some sort of arrested development, and a surprising amount of heart. Where it improves on those films, though, are the alterations it makes to the formula by shifting the focus to a female protagonist and putting more of an emphasis on showcasing real people with very real problems. All while still having room for a character named “Dick Jesus.”

Rakel (Kristine Kujath Thorp) and her roommate Ingrid (Tora Christine Dietrichson) love to party. But they are in their twenties and don’t have to take care of anyone but themselves, so it’s hardly a problem. They just want to have fun while they grow into who they want to eventually become.

Ingrid is first to notice something is different with Rakel. She’s pounding fruit juice from the fridge and has definitely put on some pounds in general, but she doesn’t really think much of it until Ingrid tells her to take a pregnancy test. Of course, Rakel learns she’s pregnant, but there’s not much she can do about it: at her doctor’s appointment, she learns she’s six months pregnant. She doesn’t believe it’s possible since she hasn’t felt any kicking, but the doctor assures her that babies sneaking up on their mothers is more common than she thinks. Hence, the very title of the movie.

Ninjababy‘s best trait is how it manages to swiftly bounce between tones. Accompanying Rakel on her struggling to figure out what to do with Ninjababy is none other than… Ninjababy himself! Rather, a doodle manifestation of Rakel’s conscience that matches her own cartoons. The crudely-drawn figure (voiced by Herman Tømmeraas) is a hilarious addition to the film. (One scene in particular where we see Ninjababy in the womb is uh…quite the adventure.) The animation is a running motif, highlighting Rakel’s thoughts and how she sees the world.

This movie is really goofy at times, even bonkers. Yngvild Sve Flikke cuts through it all with plenty of tender moments. Not knowing she was pregnant the entire time, Rakel continued to party and drink. Despite not wanting to be a mother, the thought of unwittingly harming her baby terrifies her. She also wants to make sure her baby ends up in a nice home with nice adoptive parents. (She hopes Ninjababy won’t end up with a family that’s too rich so he doesn’t end up being a spoiled brat.) And there’s also the issue of juggling the father (the aforementioned Dick Jesus) and Mos (Nader Khademi), the guy she wants to end up with when this is all said and done. The script is filled with a lot of tricky moments, and Yngvild Sve Flikke manages to treat each character with respect while still poking fun at the inherent absurdity of it all. Even Dick Jesus — who is initially positioned as a joke — is surprisingly fleshed out. At the center, Kristine Kujath Thorp gives a fantastic performance and conveys Rakel’s overactive mind without turning it into a caricature.

Ninjababy is an uncommonly mature crowd-pleaser. One that deserves the same amount of (if not more) widespread appreciation as Knocked Up, Juno, and others like it.

Thank you for reading! What are your thoughts on Ninjababy? Comment down below!