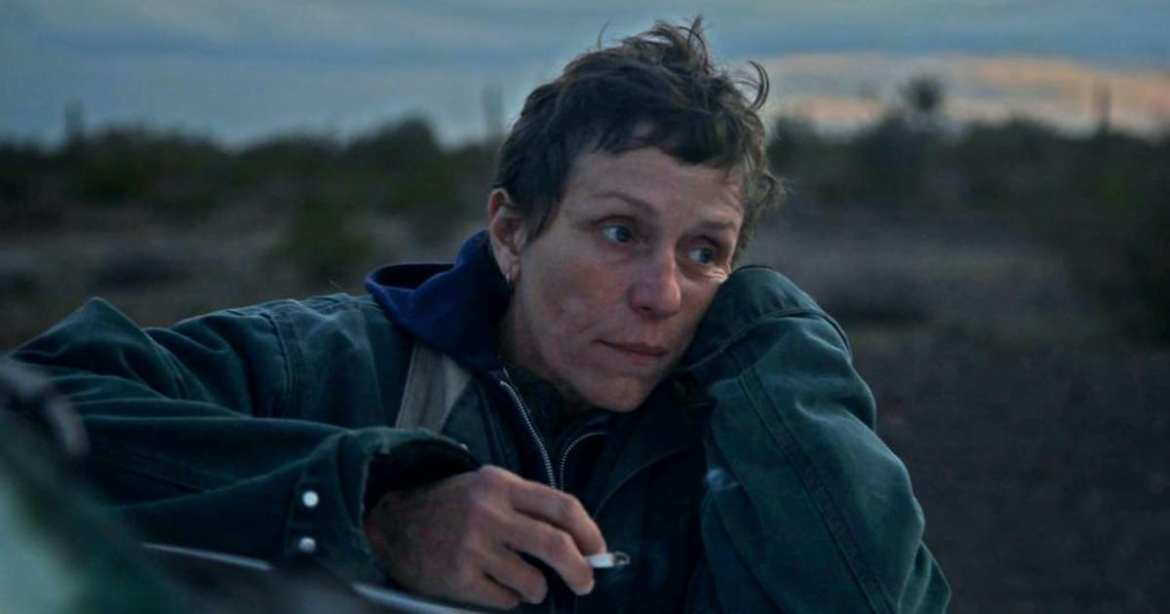 Chloé Zhao’s deeply felt film chronicles the itinerant existence of Fern, a woman who has lost both her job and her husband and through both choice and circumstances, begins living out of her van. While Fern, played with an understated brilliance by Frances McDormand, is a fictional character, Zhao populates the film with actual van-dwelling nomads, like Bob Wells and others.

It’s a bold gambit from Zhao. While it’s not uncommon for directors to use untrained actors for verisimilitude, something that Zhao has done before, it’s rare to see untrained actors play themselves and interact with fictionalized characters like we see here. Instead of drawing the audience closer to reality, this creative decision risks simply drawing attention to the film’s duplicity. And yet, it works. Thanks to McDormand’s acting and Zhao’s naturalistic direction, Nomadland weaves together truth and fiction into a beautiful examination of life on the economic margins.

At the start of Nomadland, an intertitle card informs us about the closing of the US Gypsum plant in Empire, Nevada, a company town whose economy was built almost entirely around the Gypsum mine. When the mine closed, the town dried up, eliminating even the zip code 89405. A former employee, Fern, lost not only her job but also her husband to cancer, and without a steady income, decides to start living in her van and taking odd jobs.

Her first destination is an Amazon warehouse where she meets fellow van dweller, Linda May (played by the real-life Linda May), who convinces Fern to join her at a Nevada gathering for those living the van life hosted by real-life YouTube personality, Bob Wells. It’s here that the issue of economic precarity becomes more pronounced. While few if any of these people are living a nomadic life fully voluntarily, there’s a sense in these gatherings that they can come together to build each other up. Although cast across the landscape, they are not alone.

In addition to Bob Well and Linda May, we also meet another real-life nomad, Swankie who takes the time to mentor Fern, teaching her to weatherize her van and chastising her when Fern’s tire blows and she doesn’t have a spare. It’s in these interactions with non-professional actors playing themselves that reveals McDormand’s magnificent performance. Non-professional actors are often used to establish verisimilitude, and by necessity, their screen presence is less assured and more subdued, which is why it’s remarkable that McDormand so seamlessly fits herself into their reality. It’s not the kind of big, showy performance that wins Oscars, but I’m happy to see it nominated.

And although Fern is a fictional creation in the midst of real people, she’s also a fully realized character. She is not solely defined by her poverty. When she runs into a family who knows her from a short stint as a substitute teacher, she rejects being labeled “homeless” and rebuffs their sympathy. She also asks one of the young girls if she remembers the bit of Macbeth she helped her memorize. She does.

When Fern isn’t trying to figure out her new nomadic lifestyle — working odd jobs not only at Amazon but at roadside markets, campsites, and the incomparable Wall Drug — she’s also trying to decide how much she wants to give in to the courtship by Dave, a fellow vagabond played by David Strathairn.

A film like this could easily become an exercise in miserablism. Instead, it expertly navigates between gawking images of destitution and schmaltzy stories of uplift. At times, the film clearly respects the ingenuity and community of its modern-day nomads, and its gorgeous cinematography really shows off the vertical contours of the American West. It’s a beautiful country, folks.

But Nomadland also doesn’t shy away from showing us the indignities, big and small, that come from living in a van, from finding a place to park and sleep to using a bucket as a toilet to trying to figure out what to do when your home on wheels breaks down. When Fern’s van does run into inevitable mechanical issues, she’s told that it would be more economically sound to scrap the van and buy another, an option she doesn’t have because of the hours spent modifying it for living. It’s not just a van; it’s her home.

The Book vs. The Movie

Nomadland is based on a piece of long-form journalism of the same name by Jessica Bruder, and just like the film, it chronicles the lives of people who have thrown off the shackles of their sedentary life — their mortgages and utilities–for a life on the road. Bob Wells, Charlene Swankie, and Linda May all appear in Bruder’s book before playing themselves in the film. Bruder gets to know and greatly fleshes out the background of her subjects while also interrogating why so many people after the Great Recession decided to pick up stakes and leave.

The general answer is obviously economics, but it’s worth noting that most of the people interviewed by Bruder were not only hit by major economic aftershocks. They were also in that dangerous age of late fifties to early sixties when people face age discrimination in the workplace but are still too young to collect social security, which for too many of these people is a mere pittance after a lifetime of work.

It’s worth noting that many of those interviewed by Bruder have college degrees and once worked in thriving industries, including a former tech CEO who found himself working on the floor of an Amazon warehouse. Linda May had a higher-ed degree in the field of construction and was responsible for ordering materials at her old job, but when she needed work at The Home Depot, they wouldn’t give her any position other than cashier. As she notes, all that knowledge and expertise was left to rot.

But it’s not only van-dwellers who are adapting to their new economic conditions; companies are also adapting to this new workforce. Bruder spends a lot of time focused on Amazon, which developed CamperForce, a program designed specifically for seasonal, itinerant workers.

While Nomadland the film has been widely praised, the most common critique I’ve seen online is in its depiction of Amazon. In the book, Amazon is a necessary evil for people like Swankie and Linda May. It’s reliable work, but it’s also mind-numbing and body-breaking. Older workers pop painkillers, which are freely available in dispensers throughout these warehouses, in order to push their aging bodies to the end of each shift.

The pace of work can be brutal, even for the most physically fit middle-aged employees. As a part of her investigation, Bruder worked in one of these warehouses where she observes an oppressive Orwellian atmosphere, including a “cute” mascot called Peccy (derived from peculiar,” a term Amazon employees apply to themselves) as well the phrases “Tact time is key” and “Variation is the enemy” splayed on the walls. Safety-related incidents occurred at least once a day, including boxes that fell on workers and an accidental electrocution. When union representatives appeared, Amazon quickly put the kibosh on any potential organizing.

The film depicts none of these conditions, even though Fern clearly works in an Amazon warehouse, and at one point she even praises the “good money” she can make there. Some have taken issue with the comparatively rosy depiction of the megacompany, but I find the criticism overblown.

While Nomadland’s depiction of Amazon isn’t exactly dagger-sharp, this isn’t a pro-Amazon film. The economic landscape of America post-housing bust is front and center. We begin with the shuttering of US Gypsum, see Fern try to get permanent work, and hear from other characters who have been racked by the failing economy. The film isn’t shy about taking aim at America’s failed economic system.

Sure, it could have taken more time to criticize Amazon directly, but Fern’s tenure at the “everything store” lasts only ten minutes during the runtime of the film. And when she says she makes “good money” there, the context suggests that this is a saving-face maneuver on her part.

I think this criticism of Nomadland also ignores the different purposes of nonfiction journalism and film. The goal of adapting a work of non-fiction to film isn’t simply to translate everything from the source to the screen. If you want a detailed look at how our economic system has failed Americans — and specifically the deadening work conditions of Amazon — then the book will serve you better than the film. (You should read it. It’s good!)

But film’s power doesn’t simply arise from its ability to transfer information to its audience. It comes from taking viewers through an experience in ways other mediums can’t. Watching Nomadland we are taken on a journey with Fern. Film also registers on multiple levels. Economic anxiety is front and center in Nomadland, but it’s also about personal loss as well as economic loss as well as what it takes to move on. It’s important to look at what the film does that the book cannot do.

I’m not sure if I’ve seen an adaptation quite like Nomadland. From the striking cinematography to McDormand’s acting, there’s a lot to recommend. But I think what will likely stick with me are the segments of real people sharing their darkest moments. There’s a real generosity here and a real trust that the film will do right by their stories. Zhao rewards that trust. By suturing a fictional narrative onto the real world, it functions as both an understated character study and a sympathetic look at the people our economy has left behind.

Thank you for reading! What are your thoughts on Nomadland? Comment down below!