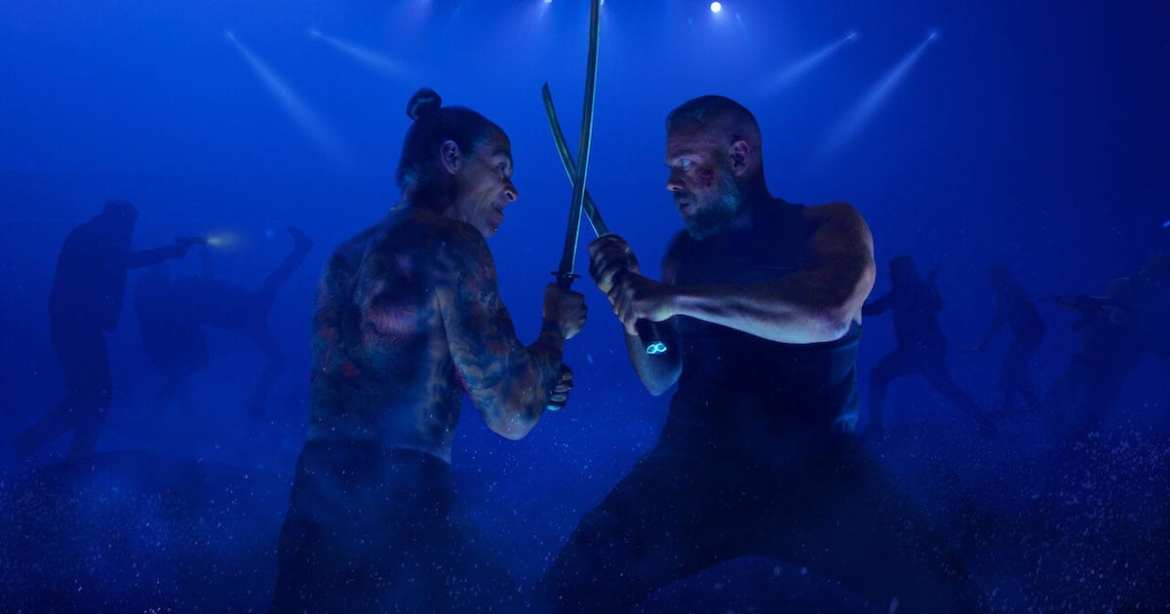 Gather ’round children, an old man is going to tell you about ye olde action movies. Let me take you back to a time when Chuck Norris headlined films. When Michael Dudikoff had a career. ‘Twas a bleak time for fans of cinematic fisticuffs. For every Jackie Chan, there was a Kurt McKinney (seriously, No Retreat, No Surrender, a film where the hero is trained by Bruce Lee’s ghost, is one of the better 80s martial arts films. That should tell you how bad the bad ones were.) Where even the skilled practitioners of chop-socky were wasted in poorly choreographed fights like this:

Cynthia Rothrock deserved better. Stop-start, one person at a time…blech. Movie fights, much like sex, should move seamlessly from one setup to the next and involve several people at once. Possibly suspended by wires. While being filmed from multiple angles.

…where was I? Oh, right, fight movies. They used to have Steven Seagal in them, but now they’re quite often good.  Streaming sites scour the world for content and they turn up some real gems in the genre of “They killed his/her (whoever) and left him/her for dead, now they want payback!” The king of these is obviously John Wick. A game-changer for movies in that it made blockbuster box office from what was previously a straight-to-video setup by focusing on the combat and choreographing it almost like a dance number. To a level way above the previous top vengeance movie, Taken, and that was still pretty good. Now, Netflix has the wherewithal to scour the globe and bring fight flicks from anywhere to a global audience. The likes of Furie (Vietnam), Maria (The Philippines), and Headshot (Indonesia) can now be seen with professional subtitling/dubs easily.

The latest country to join this group is Spain, with Xtreme. The setup is the aforementioned vengeance trope. Maximo (Teo García) a gangster, is betrayed and left for dead by his brother Lucero (Óscar Jaenada). Lucero, an enjoyably flamboyant gangster, also kills Max’s father and son. leaving Max and his sister Maria (Andrea Duro) to hide, recover, and plot revenge.

Two years later, Maximo is revealed as still alive when he intervenes on behalf of young street criminal Leo (Óscar Casas) when he’s being beaten up by thugs connected to Lucero. Maximo is presented as semi-legendary, and even hired goons know who he was. Unfortunately for Maximo, in the two years he was away, a collaboration has grown between the local mafia, Russian gangsters, and even the Yakuza. So if Maximo wants to stay alive and also get revenge on his brother while looking after Leo, he’s going to have to work his way through a metric ton of multi-ethnic hoodlums armed with bats, guns, and samurai swords. Which is bad news for him but excellent news for fans of ass-kicking.

Pleasingly, director Daniel Benmayor and his team of stunt performers take the setup as an opportunity to arrange a wide palette of action scenes. It’s not just a parade of conveniently empty warehouses, there are the alleyways of Barcelona, dry ice-filled nightclubs, a repair garage that supplies at least half a dozen innovative ways to take out anonymous heavies, including angle grinders and the gracefully effective use of a car door.

There’s more than a hint of video games to proceedings as Maximo moves to the next level/location to face a fresh wave of enemies with the occasional “end of the level boss” to defeat. They break these up with the cinematic equivalent of cut scenes where Maximo, his sister, and his new ward have an emotional moment or a quick bit of exposition. Not too many of them though. While the film has the depth of a hamster’s foot spa, it’s not like it ever aims for gravitas and it zips along nicely, clocking in at a lean running time of under two hours.

What Xtreme does nicely is act as a calling card for Teo García. Moving from stunt coordinator to leading man (and still stunt coordinator actually, he’s credited as “action director” here), he acquits himself well and should at least manage a Scott Adkins level of fame off the back of this. It’s not beyond the realms of possibility that he could be the Spanish answer to Jason Statham although he’s going to need a role with more range before it’s fair to judge whether he has that level of charisma. “Furious bereaved murder guy” doesn’t leave him any space to wink at the camera, but for what he needs to do, he does solidly.

In summary, this isn’t a film with the class of the John Wick films, the makers don’t have access to a cast with the likes of Halle Berry, Ian McShane, and Laurence Fishburne yet. But the yet is there. They’ll need to rise above the level of Xtreme, but it’s a solidly entertaining way to spend an evening as it is.

Thanks for reading! What are your thoughts on Xtreme? Comment down below!