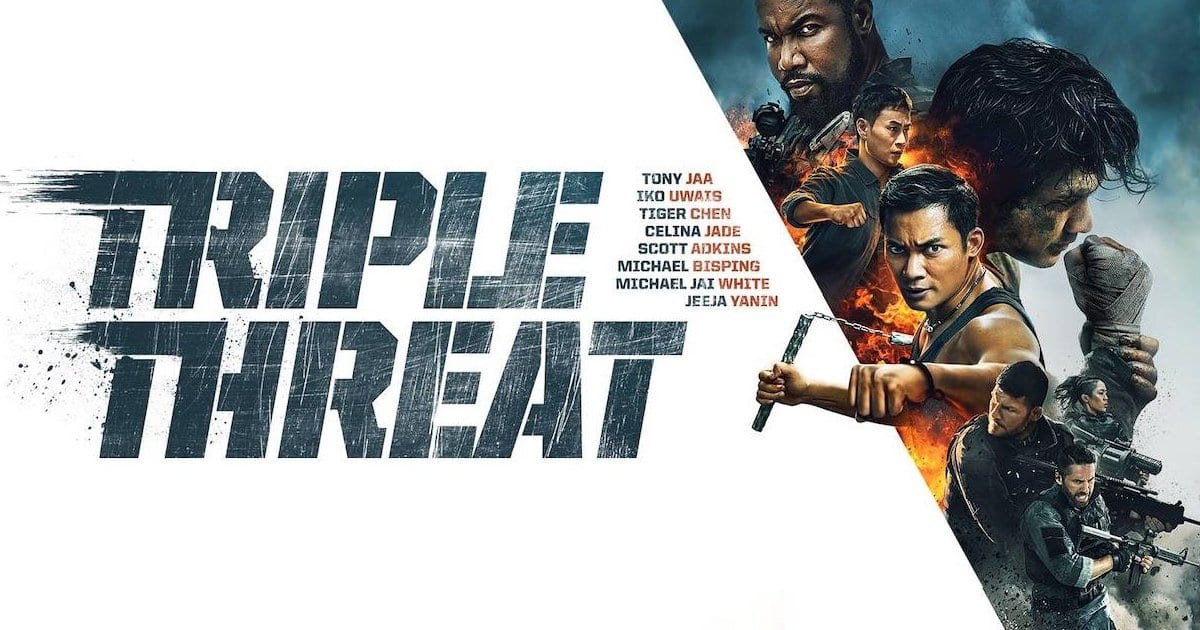 Last week I reviewed Dragged Across Concrete, which co-starred Michael Jai White. Coincidentally, Triple Threat also co-stars Michael Jai White — he’s a lot nicer in DAC. Both films are also exceptionally violent. The similarities between these two films here however, as DAC had a smart script, great dialogue and was a slow-burning character based drama. Triple Threat is the exact opposite. Hilariously, Triple Threat has at least three screenwriters compared to the great author S. Craig Zahler who penned DAC all by himself.

This is not necessarily a bad thing. TT wasn’t made to the appeal to the intellect. It’s the exact opposite, actually. If you think too much about it, especially about its nonsensical plot, you are bound to get a splitting headache. Nope, it’s not supposed to be Shakespeare. It’s not supposed to be high art. It’s sole purpose is to kick ass.

Similar to how Dutch and his gang were deceived by the bureaucratic Dillon in Predator to participate in an explosive intelligence gathering information rather than a rescue mission, so are Payu (Tony Jaa) and Long Fei (Tiger Chen) deceived by Devereaux (Michael Jai White), as they inadvertently help escape a murderous terrorist Collins (Scott Adkins) which they initially thought was a rescue mission.

During their violent assault on the camp that has imprisoned Collins, they take down numerous guards. One of these guards, Jaka (Iko Uwais), sees his wife murdered in front his eyes. After Collins is saved, the mercenaries leave Payu, Long Fei and Jaka for dead.

But naturally, they didn’t die. And now they want revenge.

Meanwhile a rich socialite, Xian (Celina Jade), desires to give a massive donation with hope that it will exorcise the crime and corruption running rampant in the country — which remains unnamed as far as I could tell.

A sinister criminal organization hires Collins and his group of psychopathic mercenaries to kill Xian. During a failed assassination attempt, Xian comes across Payu and Long Fei, who quickly come to her aid. Jaka meanwhile plays a longer game, infiltrating Collins’ gang and hoping to destroy it from within.

The only way to guarantee Xian’s safety is to bring her to the Chinese embassy. But as they attempt to do so, the villainous mercenaries are right on their tail…

The whole point of having these incredible martial artists in one movie is to see them fight. Even better if they fight each other! It’s the bare minimum of what any martial arts fanatic should expect. Fortunately, the film does absolutely satisfy on this front.

The action is fast but well-filmed. We can actually see what’s going on. These men are veteran fighters so the punches and kicks feel real. No matter how hard the West tries, they simply can’t compete with the East on this level.

It’s hard to choose a stand-out. Each martial artist gets their turn to shine. Though if you are aching to see Jai White and Adkins kick ass, you will have to wait until the climax. Before this, they are mostly just shooting anonymous people. When they finally do, however, you are on the edge of your seat. You begin to realize once again that these performers have been criminally underused.

A Lack of Humor and Chemistry 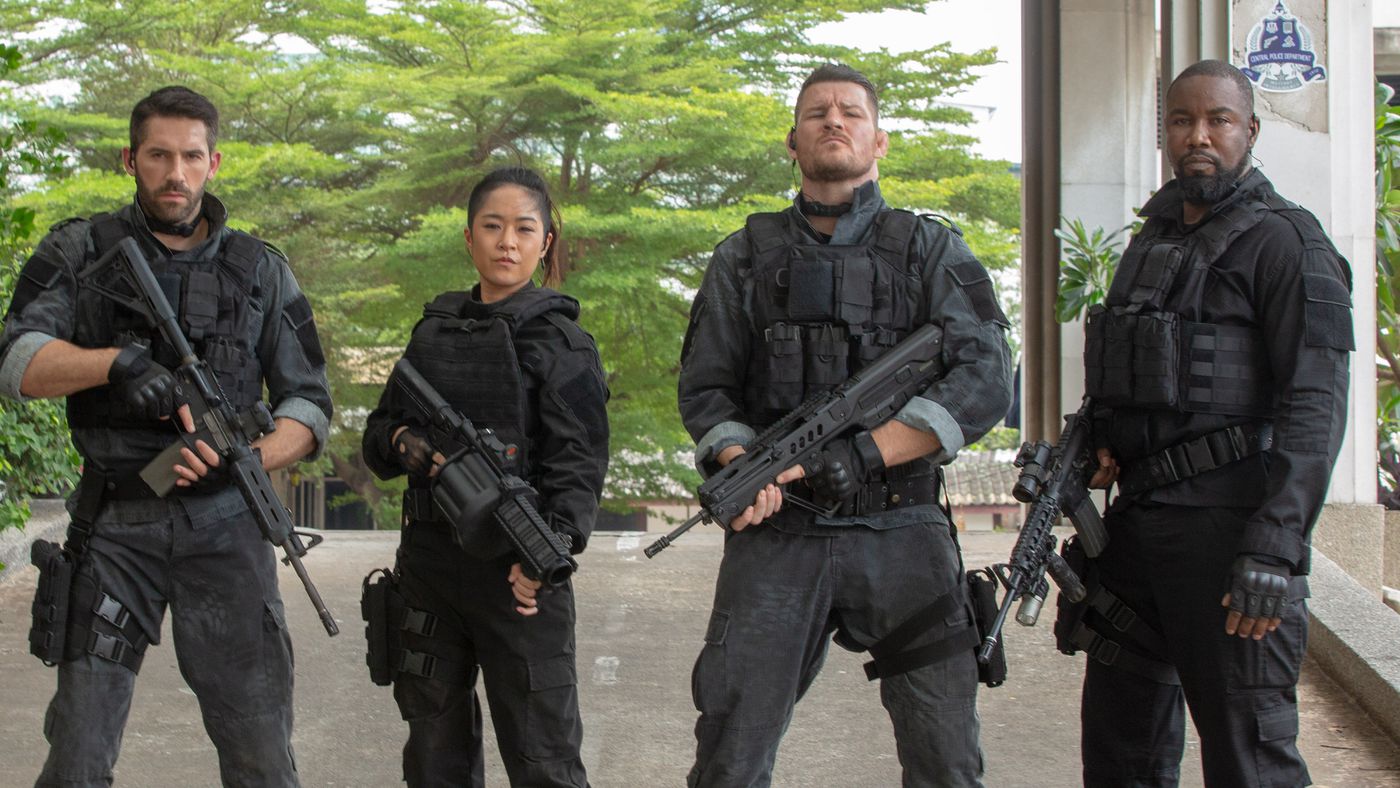 There’s a lot to laugh about in Triple Threat, especially the cliché ridden dialogue, with classics such as “this ends now”, or “is that all you got?” Yet the film does lack some genuine humor with characters taking the ridiculously plot way too seriously.

Admittedly this issue is partly due to the three protagonists. The acting can be mediocre to laughable, though this might be unfairly judged, as they are not native English speakers and thus won’t deliver their lines as confidently as their Western co-stars.

One thing they certainly do not seem to have is comic timing — or much charisma for that matter. Tiger Hu Chen comes the closest and is arguably the most likable one with a genuine funny scene that has him confessing to Xian that he can’t drive.

There’s also a lack of chemistry between the three that would have made their companionship feel genuine. They share some booze and fake laughter but all of it feels artificial. This might not be an issue to most action junkies but it does make the viewer less engaged in the action. You don’t really care for the characters. Everyone is just going through the motion. The villains are actually more fun, especially Scott Adkins who seems to enjoy playing an over-the-top baddie.

The added heart could have given this movie something extra, it could have made it something more than what it actually is — a fun but disposable martial arts action film.

Mook with her big-ass shotgun (or whatever it is). Image via Asian Movie Pulse

For all the fantastically choreographed action sequences, the film is unfortunately filled with dreadful CGI blood effects. Granted, there are a few instances of practical gore — the stand-out has one character being blown into a bloody pulp by a mega shotgun (I know gun experts are probably correcting me in the comments below). But most inconsequential characters are riddled with CGI bullets, causing red CGI mist to billow and fade away.

It just looks awful. I know it’s easier than orchestrating blood squibs and that many mindless viewers don’t care, but the extra effort really pays off. Blood squibs are cinematic treasure. Didn’t Paul Verhoeven teach us this long ago?

Triple Threat is certainly not some embarrassing, bargain-bin VOD film, starring chubby Steven Seagal. It’s an entertaining, fast-paced martial arts film with some incredibly choreographed fight scenes. Unfortunately, it’s still under the guise of a paper-thin plot (which makes less and less sense the more you think about it). There are also numerous and slightly tedious filler scenes, whose sole purpose of existence is to bump up the running time to 90 minutes.

All of this could have been forgiven if the viewer had more reasons to care, though. If there was stronger chemistry between the leads, this film could have been something more interesting. Having all these talents in one film, it did deserve to be more than just a throwaway action film.

Nevertheless, if you aren’t expecting anything more, you’ll probably have a blast. Thank you for reading! What are your thoughts on Triple Threat? Comment down below!

so basically what you’re telling me is to get this for 1.50 when it comes on sale at my video store.
Adkins and White need to stop making these chop socky movies and hold out for better roles,studios KNOW they can sell films,they just the right film and budget….