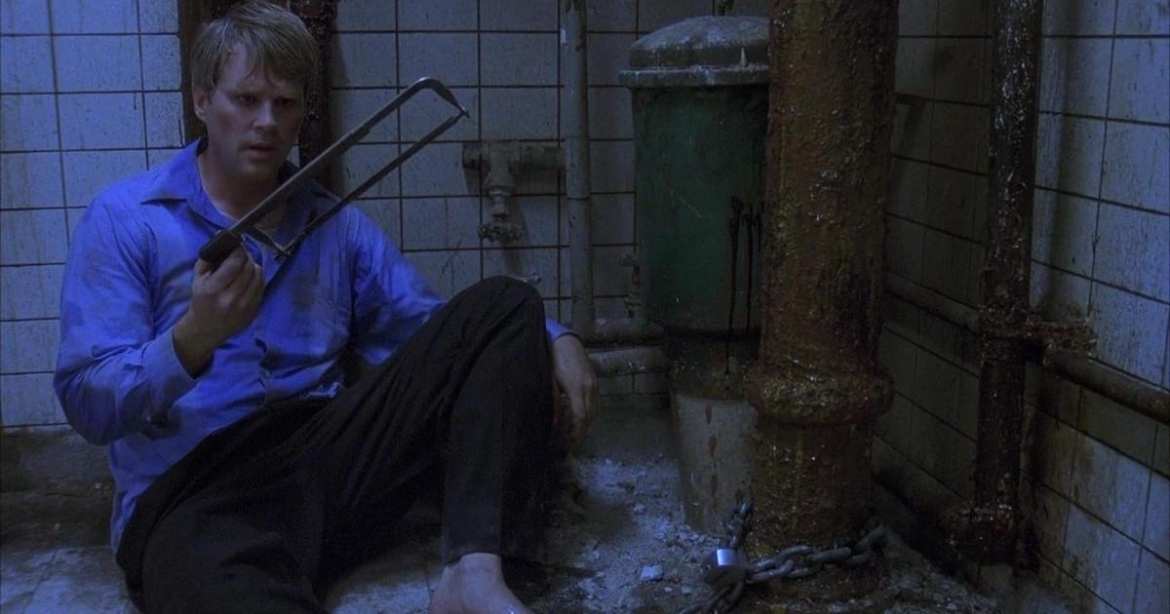 This list takes into consideration all nine Saw films, including the latest installment, Spiral. It was definitely hard to pick a top 10, as the franchise has come to be defined by the gruesome ways it kills its characters. Frankly, there are not many traps that I dislike, and my honorable mentions could go on for pages and pages.

An important measure is that there must be something visually compelling within the trap, either gore and/or some factor that makes you want to look away — a squeamish factor if you will. What makes the Saw franchise so alluring is the grotesque visuals. Although John Cramer arguably makes each of these traps ‘survivable’, the traps on this list can’t be completed without a large amount of disfigurement, making them all pretty gruesome. All traps must also be something I personally would absolutely hate to be trapped in (although that goes for every single trap, so that doesn’t really narrow it down). Lastly, the top 10 also makes special note of the characters who find themselves in these traps. Some traps feature some of the worst characters of the series, and some feature people I’d rather not see die. Do they deserve it? Or are they innocent?

A major spoiler warning of all nine Saw films.

The Needle Pit from Saw II. I don’t think I’ve ever seen a top 10 or 20 list without Amanda Young’s (Shawnee Smith) second test included. While this trap is extremely harsh on Amanda’s drug addiction background, I don’t think it’s top 10 worthy. It is hard to sit through, and is traumatic for Amanda; however, the extremity compared to many other traps is minimal.

The Pendulum Trap from Saw V. This is one of the best opening traps in the series, but is pretty much inescapable. Whatever Seth Baxter (Joris Jarsky) tries to do to crush his hands so that the swinging blade will stop just doesn’t work. An honorable mention for gore, but Seth was never going to make it.

The Shotgun Carousel from Saw VI. One of the most original traps from the whole franchise. This one just misses the top 10 as it doesn’t have as much tension as others mentioned here. It’s inevitable for the characters what’s going to happen. Two will live and four will die. Russian Roulette with a twist.

The Public Execution from Saw 3D: The Final Chapter. The first time I saw this trap, one of my friends tried to convince me it was real. Although I do love it, it seems too predictable as the characters’ dialogue progresses. The exhibition of it being in the public eye, however, does make it interesting.

Amanda Young’s first trap is one of the most iconic traps of the entire franchise. Amanda must get a key from the stomach of the man lying next to her, or her entire face will be obliterated. With a few different characters enduring the Reverse Beartrap across the nine films, including Hoffman and Jill, it’s without a doubt Amanda’s survival of the trap that is the most deserving of a spot on this list. One of the most memorable storylines of Saw is Amanda’s relationship with John Cramer. With her attempted reformation after Saw in The Needle Pit and eventual death in Saw III, Amanda endures some of the worst, yet deserving, pain in the entire franchise.

This trap could have played out easier than Addison (Emmanuelle Vaugier) made it. Why she put both hands into the trap after she fails to grab the needle properly is beyond me. It’s not as simple as one hand in and one hand out as her arm would still have been torn apart by the razors. But getting both hands trapped by razors until you bleed out is not the preferred way to go. It’s physically painful to watch as we know Addison has been hit with nerve gas, so her brain is not working at full speed. (It probably explains her poor decision-making too.) The only way for her to survive is to get the antidote inside of the razor box. Seeing her so confidently put both hands into the contraption makes it even worse to watch as she thinks she’s doing the right thing, but clearly is not.

The opening trap in Spiral finds Detective Bozwick (Dan Petronijevic) hanging by his tongue over the subway tracks. The only way for him to escape is to rip his tongue out and jump out of the way of the train. With little knowledge of Bozwick’s character, we are made aware that he has taken the stand in court to lie on many occasions. The ‘new’ Jigsaw Killer (arguably not, as Max Minghella’s character doesn’t make the traps as escapable as John Cramer would) makes this trap very tricky to survive. Bozwick does try to swing out of the way, but the train arrives, and he is killed.

Where this one doesn’t really include too much gore, the thought of Obi Tate’s (Timothy Burd) fate of being trapped inside The Furnace and burning to death is unbelievably distressing. Once the fire starts, Tate begins to suffer a horrible death. While the rest of the characters in Saw II do try to help him out, there is no saving him from the fire.

While Dr. Lawrence Gordon and Adam Faulkner-Stanheight’s trap doesn’t involve the most gore, it builds some of the best tension in a horror film I’ve ever seen. Watching Saw for the first time and finding out John Cramer is alive in the center of the room is one of the best reveals of all time. Dr. Gordon and Adam’s characterizations are phenomenal. Constantly trying to figure out who could be in the wrong and right, we ultimately pick sides. No one wants Zep (Michael Emerson) to kill Gordon’s family, but we don’t want Gordon to shoot Adam either. Without this trap, the Saw franchise may not have the same hype that it does. Gordon eventually cuts his leg off and escapes, with Cramer following behind him and taking him to safety before he bleeds out. James Wan‘s brain is incredible when it comes to horror.

Evan (Chester Bennington) is in the driver’s seat with his entire back glued to the seat; Kara (Gabby West) is beneath the wheel; Dan (Dru Viergever) has his arms and jaw in chains; Jake (Benjamin Clost) is chained to the door. If Evan is unable to unstick himself from the seat and pull the lever in front of him to stop the car from moving, everyone will die. As Evan tries to fight for his life, he is ultimately incapable, which results in the domino effect of killing everyone else attached to the trap. This trap is so gory and sometimes unwatchable — something I would definitely hate to be a part of. Having your fate in the hands of someone who has to rip their entire back off to save you is so gruesome. However, at least Hoffman picked the right people for this horrible trap as they were all racists.

Detective Allison Kerry’s (Dina Meyer) trap is one of the most disturbing traps of the franchise. The trap is pretty much rigged to be inescapable as the key has become too eroded to unlock. Allison tries her best to retrieve the key out of the acid, completing her part of the mission, but still ends up not surviving. Being suspended by your ribcage, having to put your hand in acid and then unlock a padlock doesn’t seem like a fun way to spend your last few minutes of life. Although I see Jigsaw’s reasoning for putting her in the trap, I don’t think she deserved such an awful way to go.

This trap doesn’t necessarily have the most gore involved, but it’s unbelievably infuriating to watch. The characters are unable to communicate with each other to free themselves as Trevor (Kevin Rushton) is blinded and Art Blank (Justin Louis) is without his hearing. There is no way in hell anyone could set themselves free from this one — it’s basically another inescapable trap. There’s a chance they could have cut the stitching used to shut their eyes and mouth, but with the stress kicking in, neither of them thought to do so.

The latest Saw installment finds Detective Fitch with his fingers attached to a motor, and his only escape before being electrocuted is to let all of his fingers be ripped off at the same time. This is a trap with a new mind behind it all. Fitch tries his best to stay alive, but as the water level rises towards the metal wires, he is not quick enough. Despite Fitch (Richard Zeppieri) being so close to escaping, the thought of having every finger ripped off is too gross to even imagine, let alone see unfold on screen.

Bobby Dagen’s (Sean Patrick Flanery) trial has begun, and Nina (Naomi Snieckus) is the first victim other than himself that he must rescue. Nina is trapped inside a metal cage with four metal rods pointing directly at her throat. The key for Bobby to move on to the next stage is down Nina’s throat, attached by a fishhook, all the way down inside of her stomach. Bobby must pull the key out. The only catch is, Nina cannot make a noise or the metal rods pointing towards her throat will get closer and closer. This trap is the hardest one to watch. I can always feel it in my throat as Bobby starts to pull the key.

Thanks for reading! What are your favorite Saw traps? Comment down below!

Nice idea for a post! Brought back some good Saw memories :)

The most fiendish trap was baiting Spiral with Chris Rock and Samuel L Jackson so the audience might think it wasn’t a terrible idea of a film.