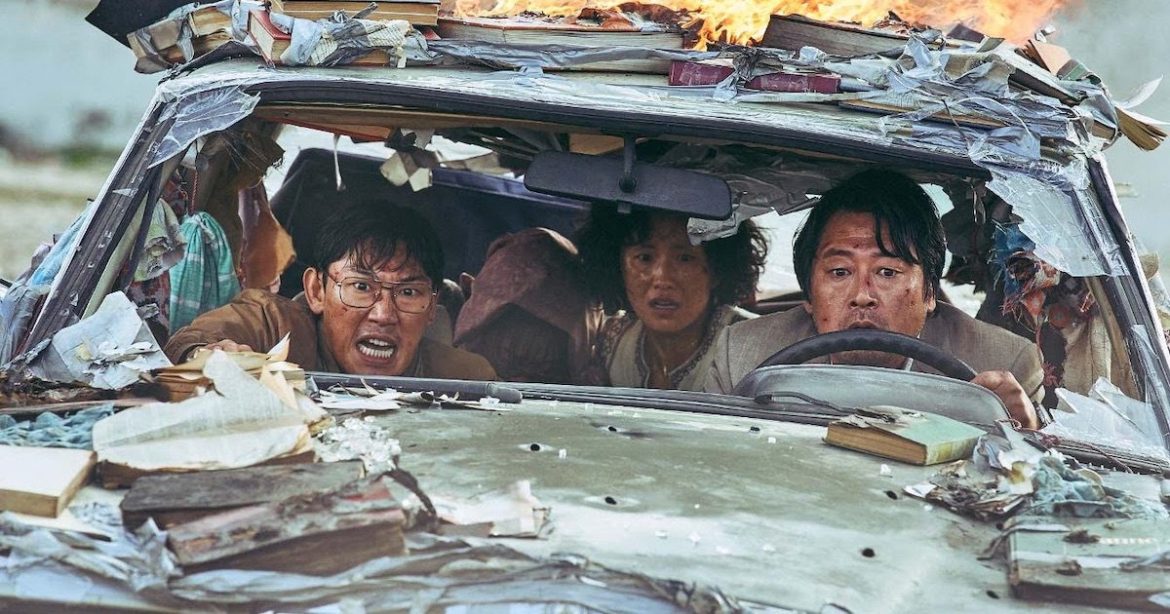 Calling Ryoo Seung-wan one of the most successful South Korean directors of his time is not an incredibly far stretch — even when comparing him to his more acclaimed contemporaries — thanks to just how well-known his mayhem-packed action films are in his home country. From 2013’s The Berlin File to 2015’s Veteran and onward, the latter of which is currently the fifth-highest grossing film in South Korean film history, Ryoo has made himself a household name by consistently creating thrillers filled with political intrigue, captivating action sequences, and memorable characters whose lines have since been picked up by the populace as iconic catchphrases. Hailing from his experience as a stuntman in major South Korean productions (much like, for instance, Chad Stahelski of John Wick fame), it comes as no surprise that his action films are as satisfying as they are, and Ryoo’s latest work, Escape from Mogadishu, should be more than enough to appease both loyal fans of and newcomers to the South Korean action genre.

Caught in the Crossfire

Set during the ongoing Somali Civil War in 1991, Escape from Mogadishu introduces us to ambassador Han Shin-sung (Kim Yoon-seok) and counselor Kang Dae-jin (Jo In-sung), who’ve been sent to gain then-President Mohamed Siad Barre’s favor by the South Korean government in order to obtain United Nations membership via Somalia’s vote, especially following South Korea’s globalization efforts in the late ’80s. There’s just one problem, however — North Korea is aiming for the exact same thing, having also sent over ambassador Rim Yong-su (Heo Joon-ho) and counselor Tae Joon-ki (Koo Kyo-hwan), and the two groups of diplomats sabotage each other’s efforts, either by canceling Han and Kang’s appointments and hiring gunmen to rob them, or by spreading rumors about the North Korean government arming an insurgent militia.

However, none of them realize that the war brewing in Somalia is only escalating, and when it finally erupts into all-out violence, both Korean embassies are completely cut off from contacting their governments, trapped in their respective buildings and running low on supplies. The situation only exacerbates when the North Korean embassy comes under siege from a band of rebel militants, and their diplomats — as well as the numerous families they’ve housed — seek out the South Korean embassy for sanctuary, forcing the two countries to put aside their nationalistic differences in order to get out of Somalia alive. So begins the impetus for Escape from Mogadishu‘s rip-roaring mission; a thrilling, well-made action experience that delivers a satisfying, refreshing outlook on North-and-South Korean unification, yet does so at the expense of a nuanced, more significant perspective on the Somali Civil War itself. 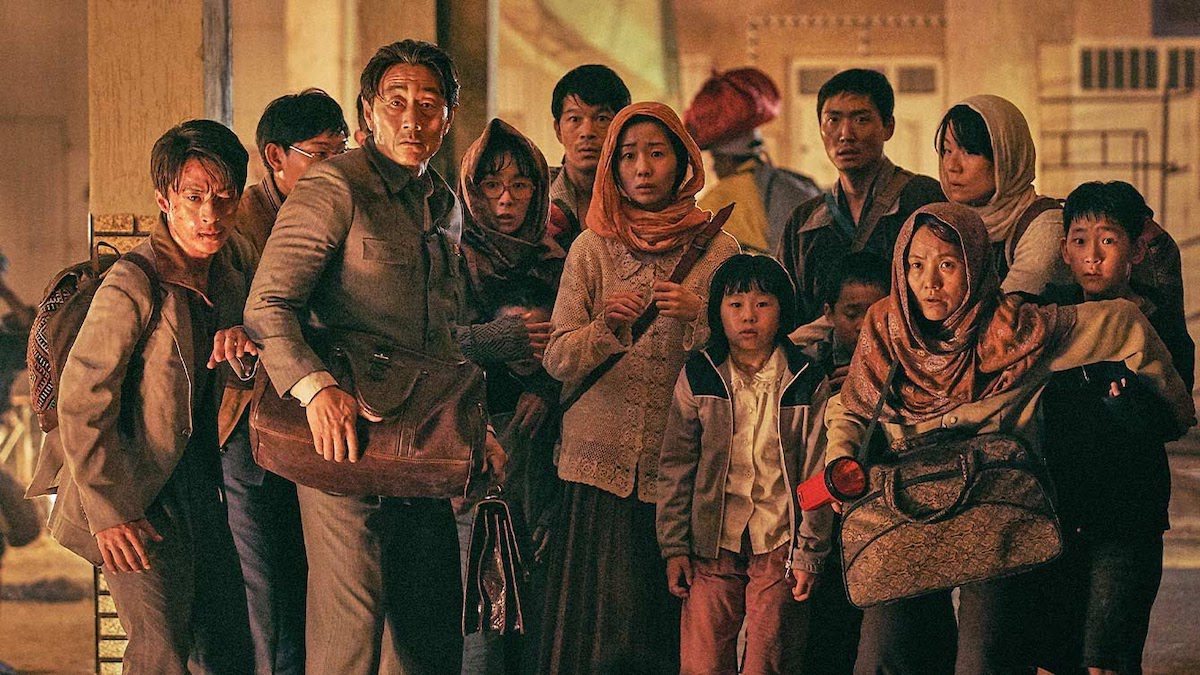 South Korean cinema’s longstanding tradition of depicting the Korean War’s ongoing tensions — lasting from perennial classics such as 1961’s Aimless Bullet all the way to modern blockbusters such as Joint Security Area (from Oldboy’s Park Chan-wook) and the Steel Rain series — seems to have found itself a genre-specific new installment with Escape from Mogadishu, which utilizes and engages with said tensions as a crucial part of its narrative foundations. Indeed, that’s mainly what its four leads’ performances seem to be in service of, as their characters each represent different aspects of their respective countries’ attitudes towards each other, and provide a coherent source of conflict and catharsis underlying the film’s fast-paced rhythm.

As is typically expected of them, veteran stars Kim Yoon-seok (The Chaser) and Heo Joon-ho (The Merciless) are naturals at playing the two Korean ambassadors, who gradually acknowledge the North and South’s mutual need to cooperate and flee Mogadishu despite unresolved stereotypes and preconceived notions about each other’s trustworthiness. It’s their younger counselors, however, who prove to be more adversarial, as Jo In-sung and Koo Kyo-hwan’s characters frequently trade insults and blows as they remain wary of and passionately quarrel over one another’s actions, only barely restrained by their superiors in the process — a type of boiling-over energy that Jo and Koo execute with both a nervous sense of bitterness and traces of gallows humor, and serving as an allegorical representation of the perceptions the two countries still hold for each other to this day.

Meanwhile, Ryoo’s ever-dependable direction certainly doesn’t seem to have lost its luster, with his knack for dynamic pacing carrying the story along well enough so that not a single moment is wasted in getting to Escape from Mogadishu‘s primary thrills. Establishing a sense of atmosphere in Somalia isn’t much of an issue, as this film’s rock-solid production value ensures that virtually everything in the frame gives off a proper sense of location, from Mogadishu’s street-side shops and its massive stone buildings, all the way to its brown-shaded horizons and purple-hued sunsets. As for the action itself, handheld long-takes provide a sense of real-time tension as characters move from one dangerous location to the next, brawls between characters are rivetingly choreographed (with a truly refreshing lack of over-indulgent shaky cam), and the high-octane car-chase sequence found towards the climax of the film employs some genuinely innovative visual techniques that aren’t easy to find even in major Hollywood blockbusters.

Had Escape from Mogadishu invested more into reflecting the political stakes of the Somali Civil War, however, it could have easily become a compelling juxtaposition of not just one, but two intra-national conflicts. The opening act at least delves somewhat into the driving forces behind the Somali conflict, portraying the citizens’ and United Somali Congress militia’s resistance to Barre’s oppressively dictatorial military rule, as well as how the international embassies in Somalia are threatened by the insurgents unless they cease supporting Barre’s government, which directly leads into the Koreans’ need to leave the country. By the time the film reaches its more action-centric second half, however, the uprising’s motivations mostly fall to the wayside, instead becoming a generic setpiece threat that the Koreans have to evade — a disappointment for a film that shows signs of exhibiting a nuanced, possibly even anti-authoritarian perspective on the war itself.

Still, that doesn’t significantly detract from the fact that Ryoo very much still has his finger on the pulse for what makes the action genre as effective as it can be when used to its greatest technical potential. Satisfying at most of the narrative turns it takes, and filmed with the panache of a veteran who does know the ins and outs of his primary niche, Escape from Mogadishu does fall behind in its relatively wanting investigation of the Somali Civil War, but it’s an entertaining experience that anyone with a taste for South Korean cinema and commandingly made thrillers in general should watch for its edge-of-your-seat, bombastic display that gets at the heart behind the need for Korean unification.

Thank you for reading! What are your thoughts on Escape from Mogadishu? Comment down below!