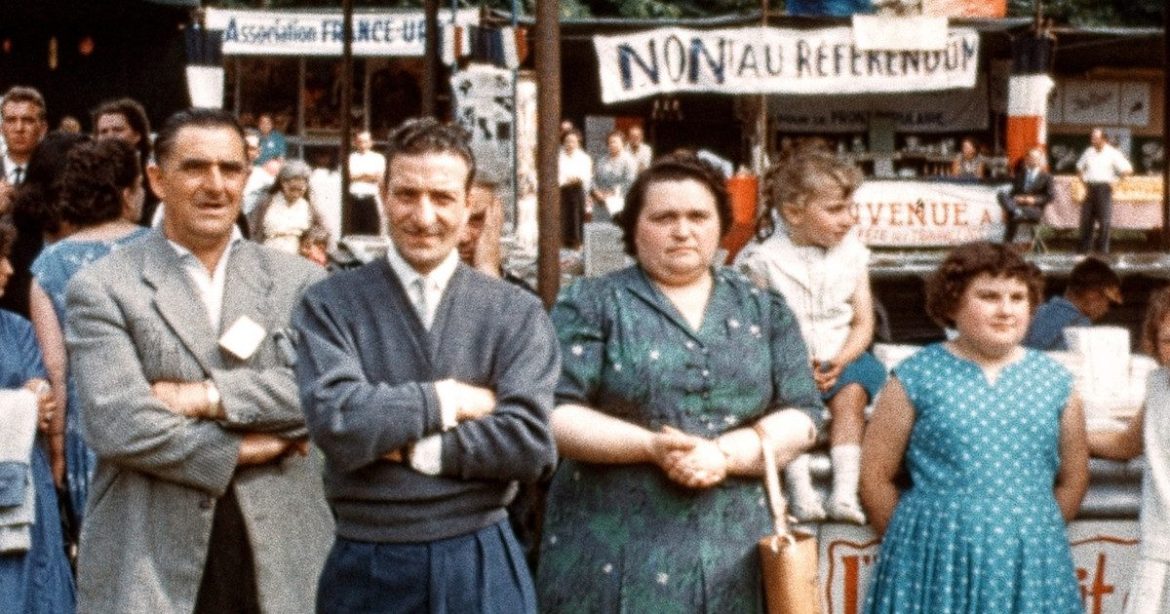 Capturing the spirit and history of the French working class over the past 70 years is a gargantuan task of historical retelling and curation — especially if it’s through an 80-minute documentary strung together solely with archival footage and narration. By some freak incident, however, that’s exactly what Jean-Gabriel Périot’s latest documentary feature, Returning to Reims, accomplishes with impressive dexterity, and its process of intricately framing this history is marked with numerous advantages that allow this to take on qualities of a medium-blending narrative and a brilliantly edited historical essay. With a universal-yet-intimate narrative freely provided by Didier Eribon’s memoir of the same name, and gracefully unified by narration from Portrait of a Lady on Fire‘s own Adéle Haenel, Returning to Reims is at once a sincere recounting of the French working class’s continued struggles, as well as a call to action and consciousness for activists and workers in the modern age.

While specific personal details of Eribon’s life as outlined in his memoir — for one, his homosexuality and his parents’  rejection of his identity — are removed with Haenel’s more generalized narration, the broader strokes of his story and his family dynamics seem to be kept rather intact. That includes, of course, the introduction; Haenel, taking on Eribon’s role, describes in first-person voiceover his return to his hometown of Reims over shots of its streets and locations, in order to meet with his mother following his father’s hospitalization at a clinic. Their encounter is reluctant, with Eribon having fled his family with no real intention to return, but his meeting with his mother prompts a reconciliation as she retells to him her earlier days as part of the French working class. Soon enough, the narrative promptly morphs into a kaleidoscopic description of Eribon’s family history of suppression by the bourgeois, participation in a growingly leftist political landscape, and ultimately, manipulation by the alt-right demagogues who exploited the working class’s needs.

The primary conceit of Returning to Reims‘s framing device — essentially dividing the film into two halves and an epilogue — isn’t made quite as clear with its first half, which just might be the better portion of the two given the stirring juxtaposition of its singular, unique narrative and the expansive reach of the footage Périot uses. Much of the narrative described by Haenel in this section is specific to Eribon’s parents, as they cope with abandonment as children, live through the harshness of life in the slums, learn the stark realities of raising children and having abortions, and face the abuses of innately exploitative working environments. Given that this is very much the story of Eribon’s family, you’d expect a narrative of this kind of intimacy to be laid out through singular depictions of these people, but instead, the archival footage that Periot expertly cuts into place, compiled from both older documentaries and cinematic works of fiction, gives them different faces, voices, and background lives entirely as countless workers and characters are used as stand-ins for their experiences. It’s a brilliantly adroit way of emphasizing the universal in the personal for such a widespread, frequently harrowing class struggle.

It’s in Returning to Reims‘s second half that it starts to feel much more like a clinical yet well-made video essay, as it gradually seems to lose the more personal sheen of the preceding half. With the rock-solid narrative foundation given to us already, however, the brunt of its political commentary is only given that much more weight given the sheer emotion of the story we’ve just paid witness to. As the archival footage’s respective formats widen their aspect ratios, start taking on color, and lessen the grain on screen, Returning to Reims becomes less about Eribon’s parents and more about the political climate that influenced their beliefs and actions. The meteoric rise of the Communist Party and other socialist movements in France in the ’70s soon becomes overshadowed by the takeover of the National Front, whose white supremacist rhetoric scapegoated workers’ issues with labor rights and wages on the predominantly North African immigrant workers moving to France at the time. Each key element of these political developments is given equal due even for the film’s brisk runtime, as it never seems like Returning to Reims doesn’t at least offer a clear picture of what started certain trends, who they most appealed to, and what their outcome was on the people they most directly affected.

By the time its trek through French history nears its end, the film is incredibly clear about the means through which it phrases Eribon’s memoir, and also about the ends it achieves with such impressive control over its storytelling via curation and editing. With an epilogue that harkens to the continued political struggles of the 21st century, Returning to Reims points out the ways that these systemic issues aren’t just the byproduct of dysfunctional and overwrought political trends, but also ones that have direct effects on personal lives and were born out of the struggles of people yearning for a life made — as Eribon describes — “[not] of wealth, but of life and liberty.” Perhaps its concluding note of optimism, not to mention its awareness of the mobilization of today’s youth in activism, is a sign of who it wants to appeal to and how they want to make said appeals; it’s an acknowledgment that the one purely resilient thing the working class will continue to have, even after being exploited and beaten down for generations on end, is hope.

For more information on Returning to Reims and other films playing at the New York Film Festival, check out their website.

Thank you for reading! What are your thoughts on Returning to Reims? Comment down below!