In her meditative love letter to the Swedish filmmaker, Mia Hansen-Løve finds courage and soul in creation. 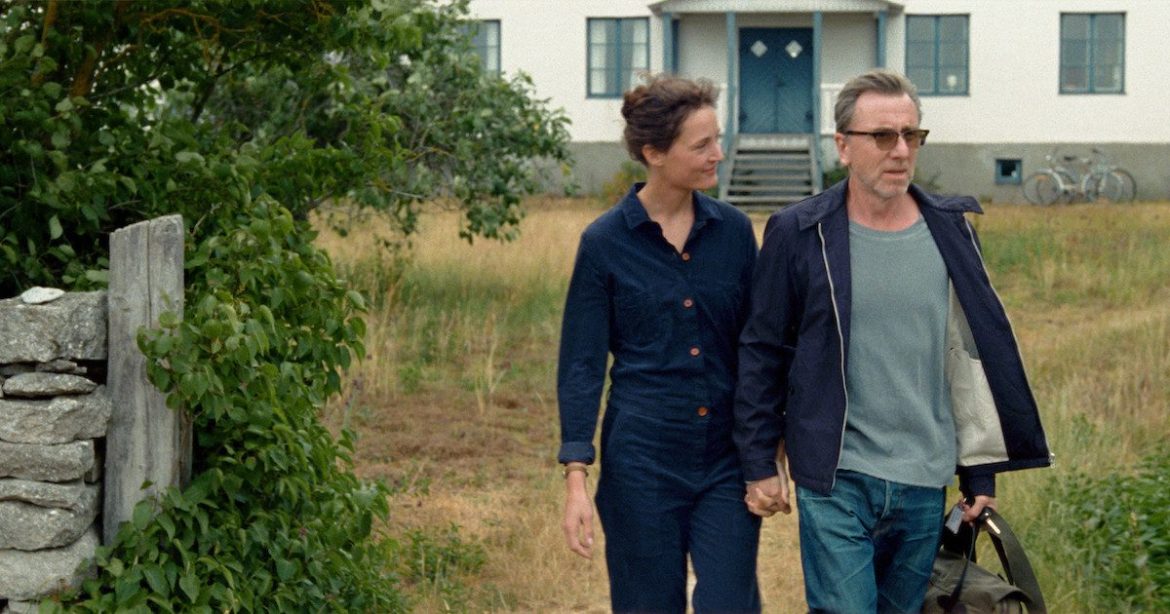 Swedish filmmaker Ingmar Bergman once said, “no art passes our conscience in the way film does, and goes directly to our feelings, deep down into the dark rooms of our souls.” To many of us, film is not just an observable art, one that is as entertaining as it is possibly real, it’s also a reflective canvas, mirroring our realities, oftentimes blending fiction into reality as we attempt to find ourselves and some deeper meaning in the films and filmmakers we adore. Film is a mirror of reality, a reflection of our lives, our feelings, our hopes and dreams, our regrets and failures; it could be said that film, as an art form, is a totality of our own image, but even if a film is, in its entirety, a reflection of ourselves, it can never truly contain one’s whole life, rather just pieces and segments of it in its narrative. But that’s the beauty of film, it never needs to be a complete reenactment of someone’s life to be complete, because there is a further wonder in the earnestness of reflection and in the courage of creation; the kind of truthful conviction resulting in mirrors of our own reality that similarly appeal to others in its themes and messages.

Dwelling on the legacy of Ingmar Bergman’s oeuvre and the presence of his life on the titular Fårö island (where the film is set), Hansen-Løve finds beauty, awe, realization, and bravery in the artistic process. Fårö was home to Bergman and his movies; he lived and died there, as well as filmed several features on the island, including but not limited to, his 1973 Golden Globe-winning miniseries Scenes from a Marriage and his 1966 Academy Award for Best Foreign Language Film entry for Sweden, Persona — which is mentioned in Hansen-Løve’s film for having brought peace and catharsis to Bergman during production, despite being oppositely psychologically perplexing to everyone else. It’s important to mention and bring particular emphasis to Fårö and it being the home of Bergman’s films as it is central to the story, with Krieps and Roth’s characters traveling to Bergman Island to give them inspiration and peace of mind in writing their own respective screenplays for upcoming films.

During the Bergman tour scene in the film, there’s a line of dialogue from the guide that states it’s as if “Bergman had found his own landscape, one that already existed inside him,” when he discovered and lived on Fårö; in her own way of paying homage to the Swedish filmmaker, Hansen-Løve finds a similar path in Chris’ narrative (the character played by Vicky Krieps). Although the island brings a sense of uncertainty at first, it later fuels her with significant reflections on her own work and relationships. Fårö, the titular Bergman Island, is used by Hansen-Løve to pave a way for reflecting the artistic process, from parasocial relationships permeated through films and blending bites of reality into waves of fiction, to subtly displaying our innermost emotions and the recirculation of inspiration within art, including breaking-down inspiration and the — to us — seemingly-perfect and almost mythical figures we often find inspiration in.

Proportional to her significance in the film, many of these thematic musings on the artistic process are framed through Chris’ character, in how Hansen-Løve explores Chris’ artistic process and career. A particularly fascinating ongoing conversation that is carried through the film is that of social roles; by using the first act to solely explore and have the audience understand the husband-wife relationship dynamic between Krieps’ soulful yet internally conflicted Chris and Tim Roth’s discreet and solemn Tony, we, as the audience, are exposed into reading the subtexts of the script Chris is developing, that is brought to life through the second and third acts.

This exposition to their characters, their backgrounds, their scripts in development, and their relationship dynamic opens the possibility up for Hansen-Løve to explore the artistic process in a personal way that is intimate to Chris’ character, using her social role, as a wife and a potential mother, to explore how these roles reflect and sometimes define careers in film, such as double standards — men neglecting their familial and paternal duties to focus on their work is viewed as conventional, however for a woman, it is seen as a sacrifice to ignore their maternal duties or responsibilities to dive into their work. Further playing into the dissection of inspiration, Hansen-Løve connects this double standard to Bergman’s career, in how he had numerous children with several wives, yet still spent a lot of his time on his scripts and films, although no one questions this sacrifice of paternal responsibility for career, breaking-down his perceived almost mythical figure as an artist and filmmaker, by viewing him as a human in articulating details of his personal life, deconstructing the parasocial relationships we have with filmmakers, by laying bare the truth of us not actually knowing them personally outside of their work.

Pinpointing the contribution and inclusion of a filmmaker’s personal life into their work by conversing about Bergman’s own personal life in parallel to his work, Hansen-Løve uses this angle to root us into Chris’ stirring and lovely in-development script, where Mia Wasikowska plays a youthful filmmaker, Amy, an inherent counterpart for Chris in her own story, who reunites with her first love, Joseph, played by Anders Danielsen Lie. What makes for a meta-captivating second act is Chris reciting the outline of her script — seemingly inspired by her own experiences and first love — to her husband, Tony, as it is fully reenacted by Wasikowska, Lie, and other actors, almost as if her script has been brought to life as a movie, which does not only blend fiction and reality by having Chris’ script mirror her own intimate feelings and relationships but also raises interesting questions about the intimacies we avoid in reality but only choose to express in fiction. For Chris, this latent expression of intimacy is raised through her divided affections; although we see her love for her husband through the first act (despite tidal moments of imbalance in their bond and dynamic), we are also implied into believing she still has feelings for her first love, as depicted through the rendering of her script, which raises a question of duality, as to whether it is possible to love two different people at the same time.

This conflicting duality is also a representation of the way Hansen-Løve depicts the artistic process, in both Chris and Tony’s respective processes of writing and developing their feature scripts; in Bergman Island, we are exposed to the struggle in creation, but with that struggle, in bringing stories and narratives to life, we are also introduced to the beauty of filmmaking as its own art form. Here, filmmaking is seen as a cathartic artistic process — although there is conflict and incongruous feelings of duality in writing and developing a script, it is also an artistically and humanly enriching process of rumination, not just in reflecting ourselves, but also in reflecting the landscapes around us and the creative process of creation itself.

Chris’ script, when brought to life by Wasikowska’s lively, earnest performance as she reunites with her first love on Bergman Island, not only reflects Chris’ own internal intimacies and emotions, as brought out through the vulnerable feelings she conceals in herself but instead expresses through her alter ego in the script, Amy, but also reflects the island on which she writes the script on and the process of this creation, using the backdrop of Fårö in her script to evoke the dualities she feels but fails to address or authentically embrace in reality during her time on the island writing the script, which is a nuanced exposition into how reality influences our work while our work mirrors and reflects out reality, helping us understand the meta-layers, in Chris’ own career as a filmmaker, of creating art.

These meta-layers of fiction and reality blurring into one another culminate with the climax of the third act, as Chris’ in-development script, which was recited to Tony in the second and third acts, now comes to life in a moment of pure daydream-like awe, as Chris awakens to her script now being filmed into a feature film, as we jump years into the future, but remain on Bergman Island as Chris’ script-turn-film wraps up its final days of shooting. This transition from reenactment to reality is a remarkably genius moment of filmmaking from Hansen-Løve, both from a writing and directing standpoint, as fiction blurs into reality and comes to life through the art of filmmaking.

Through hidden meanings, concealed intimacies, and innermost desires masked from reality but expressed through art, Mia Hansen-Løve brings to the cinematic world a fascinating meta-layered rumination on the artistic process, exploring the muses that inspire us, the shadows of reality that blend into fiction, and the themes that mirror our reality. Perhaps untrue to its title, the film is not a direct homage to Bergman, but rather an insightful continuation of his legacy, in contrasting his work by exploring our deepest, most concealed intimacies; rather, Hansen-Løve’s Bergman Island is more of an homage to the art and creative process of filmmaking itself, in embracing themes of artistic reclamation by exploring the cathartic journeys we partake in while bringing the words of scripts to life in the form of feature films. Bergman Island finishes beautifully, arriving with resolve, vulnerability, and catharsis, understanding, and fully embracing of Chris’ internal feelings, and although it never ends with a definitive stance on where its finality lies, it marks the completion of a personal voyage; through script to screen, through the artistic struggle of creating a film, the process has arrived at its conclusion, and so with it the feelings and disclosure that journeyed alongside.

Thank you for reading! What are your thoughts on Bergman Island? Comment down below!

“Poopception” and Other ‘Tenet’ Related Questions