‘The Devil All The Time’ Has All the Star Power, Not Enough Shine 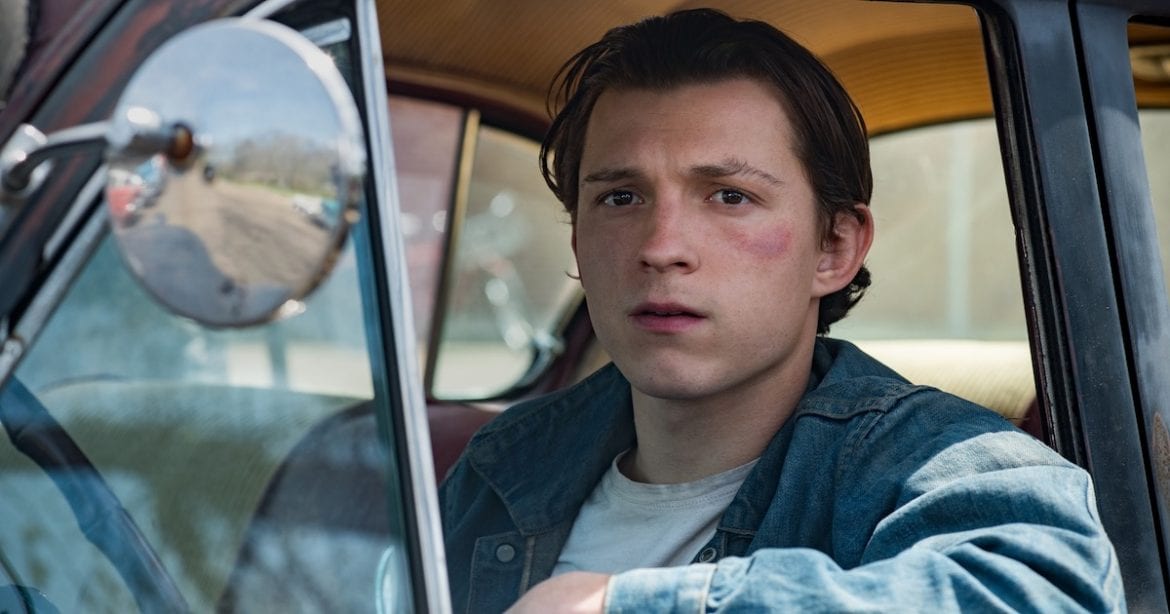 It is rare that I am pleasantly surprised by a movie, especially a Netflix movie. Especially a Netflix movie that so far, has been deemed mediocre by critics and fans alike. Especially an allegedly unimpressive Netflix movie that focuses on Appalachian religion in the 1950s and 1960s. Yet, The Devil All The Time comes in, and I genuinely liked this movie. I never want to watch it again, but Antonio Campos does a great job of building a lot of narrative suspense, which ultimately pays off. It was too long, and the story threads came together in a way that ultimately felt forced, but the all-star cast and general atmosphere still made for, what I thought, was an interesting story.

Hell is Other People

Based on the novel of the same name by Donald Ray Pollock, The Devil All The Time follows a myriad of lower-middle-class white people in mid-century Appalachia, namely in Ohio and West Virginia. Now, I love films that act as a sort of anthology of different stories that end up fitting together. Some favorites include Love, Actually and Hail Caesar!, but this is by no means an uncommon trope. It’s simply hard to pull off, because it requires a lot of planning and near-perfect execution. Not only do all the characters have to be interesting and worth watching, but they all have to relate to one another, and that isn’t very easy to make happen in 120 pages. I admit, I have not read the original novel, but I think this film’s main downfall was in the poor execution of connecting everything.

We are first introduced to Willard Russell (Bill Skarsgård), a World War II veteran who meets the love of his life, Charlotte (Haley Bennett), and marries her upon returning from war. He was initially supposed to be set up with Helen Hatton (Mia Wasikowska), but she marries the enigmatic preacher Roy Laferty (Henry Melling). Both couples have children, Arvin Russell (Tom Holland) and Lenora Laferty (Eliza Scanlen), but through a tragic series of events both children are orphaned and left in the care of Emma Russell (Kristin Griffith), Willard’s mother, and her brother, Uncle Earskell (David Atkinson). We are also introduced to Carl (Jason Clarke) and Sandy Henderson (Riley Keough), who are serial killers who live in the same town Charlotte did when she and Willard met. Sandy is also the younger sister of the corrupt sheriff, Lee Bodecker (Sebastian Stan). 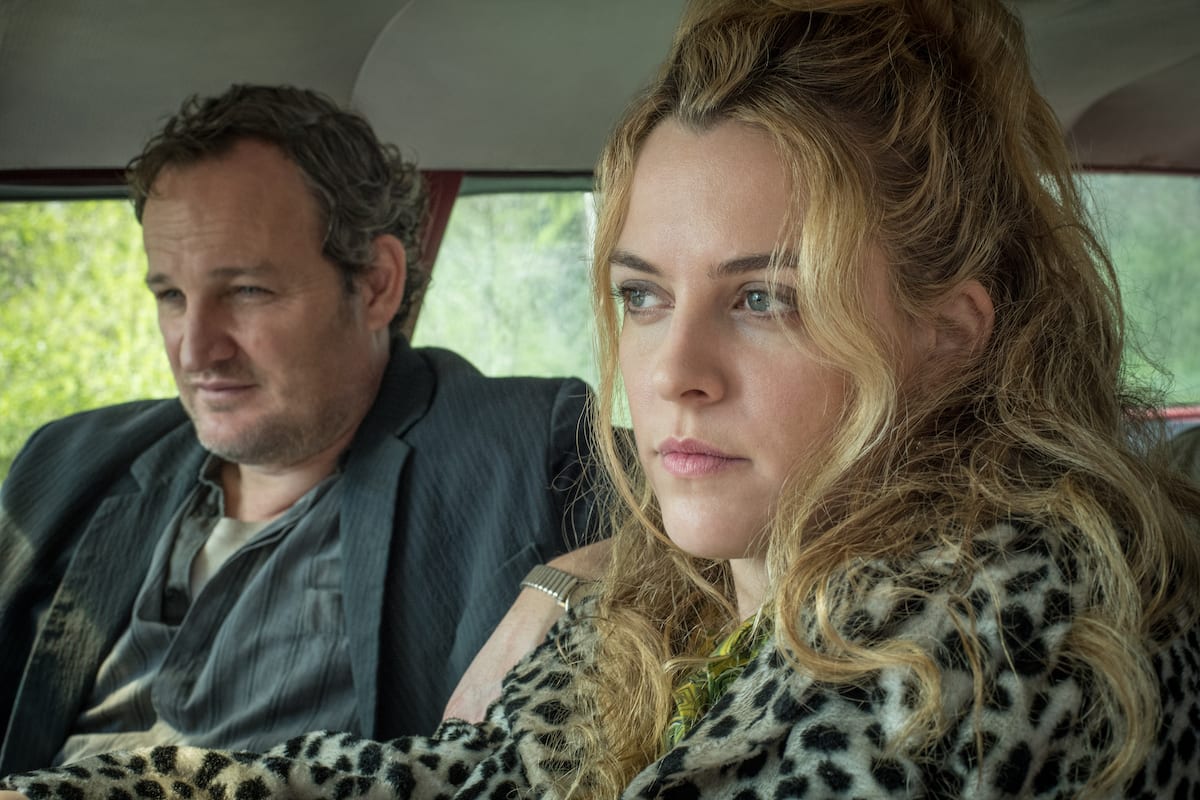 All these introductions and exposition take up the first 45 minutes of The Devil All the Time, and in these first 45 minutes, Tom Holland and Robert Pattinson are nowhere to be found, and they were, at least from what I saw, the two main parts of the marketing campaign. Pattinson doesn’t even play any of these characters! Eventually, Pattinson comes in as the dirtbag preacher, Reverend Preston Teagardin, and Pattinson’s accent for this was…a choice.

All of these characters, beyond their connections to one another, are bonded by their experiences with religion and the questioning of it. Arvin is ardently opposed to prayer, Lenora is particularly pious, Carl plays god, Willard became delusional with ideas of how he could get in God’s good graces, and Preston, well, he uses his work as a “good Christian” to manipulate and humiliate people he has power over. I thought the theme of religion and prayer and personal relationships to prayer was poignant and impactful throughout the film, even if Pollock’s narration often felt like beating a dead horse.

The casting saved this film. Had any actors of a lower caliber than these come into these roles, it would be an instant failure. It was really through the performances of Holland, Scanlen, Pattinson, and Keough that the film shined at all. Douglas Aibel, the casting director, deserves any and every accolade this film gets. Holland embodies the angst of Arvin so wholly, without making him an unlikable martyr. Something about Holland connects in a way where I knew any decision Arvin made was not only selfless, but well thought out, and, often, the most practical way to overcome a problem. Scanlen has been a favorite of mine since her knockout role in Sharp Objects, and she delivers again here. She’s pretty, sure, but her eyes contain her soul, and she is able to so easily switch from angry to sad to contemplative, and all the way back again, without moving a muscle or saying a single line. The deep sadness I felt for Lenora in every scene she was in makes her climactic scene all the more gut-wrenching.

Pattinson has been much talked about for his, like I said earlier, choice in accent. My brother, who lived in Tennessee and West Virginia for a few years, assures me his accent is pretty accurate, but I was distracted by how high it went. Regardless, Pattinson lives for these roles: unhinged and morally questionable, at best. The fervor of Teagardin’s preaching is amplified by Pattinson’s wide-eyed, fidgety movements, and the, how do I say this, douchey turn he takes makes complete sense. Finally, Keough is great in this, and I wish that her role had more weight. It felt like she was sidelined because, frankly, her story barely fit into the greater narrative. In the moments where we do see her, she shines, owning the descent of Sandy into depravity, and making us root for a redemption arc that we know can never come. 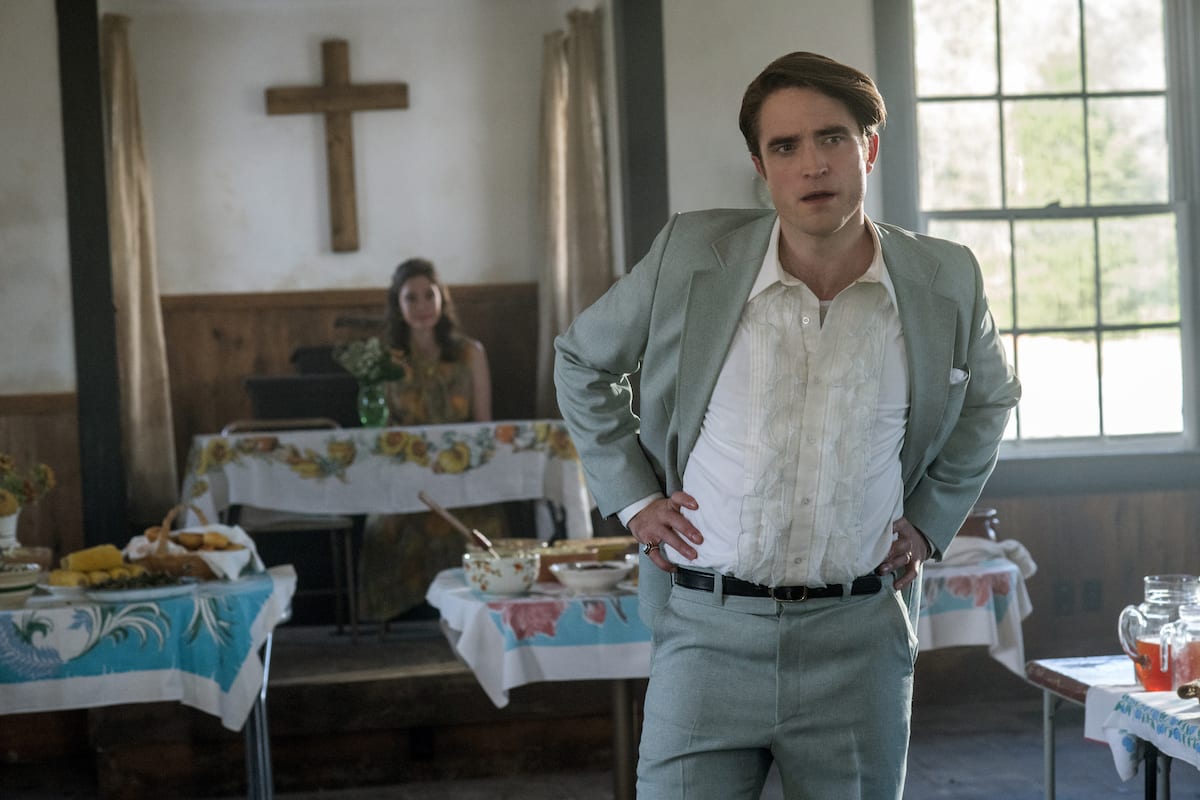 From everyone else, there is good acting, but nothing earth-shattering. Stan makes Bodecker my least favorite character, which is saying a lot for a story filled with just the worst people in the world. It all ties back into the execution of a multi-narrative story, where it’s just hard for any actor to make a mark when their character has limited screen time. And, not enough screen time was given to some top-tier actors in order for them to make anything substantial of their respective characters.

The Devil All The Time is fun to look at. Emma Potter did the costume design, and I think she really nailed the feel of a rural town in the 1960s without making it the focal point. The costumes pair very well with Lol Crawley’s cinematography. Crawley uses the decrepit and vast nature of a small town and its backwoods to elevate the mystery and weight that this story is meant to have. I loved how bright he kept The Devil All the Time at large, because it would be really easy to darken it quite a bit, a phenomenon in film I often find unnecessary. Crawley used the light to show how even on the brightest of days, corruption and sin still happen. Humans never restrict it to the dark corners of seedy motels at night.

God’s Watching and So Are We

I’ve gone on long enough, so here is where I will wrap it up. The Devil All The Time is so close to being perfect. It spends too much time on exposition, and it doesn’t execute as well as it should, but it is still a gripping and interesting watch. I was not really expecting to like this, and as I said before, I was genuinely surprised by how much I liked it. I can’t stop thinking about it! It just needed that extra push, and it, unfortunately, didn’t get it. For a movie all about going the distance for God, I wish it had gone the distance for itself.

Thank you for reading! What are your thoughts on The Devil All The Time? Comment below!