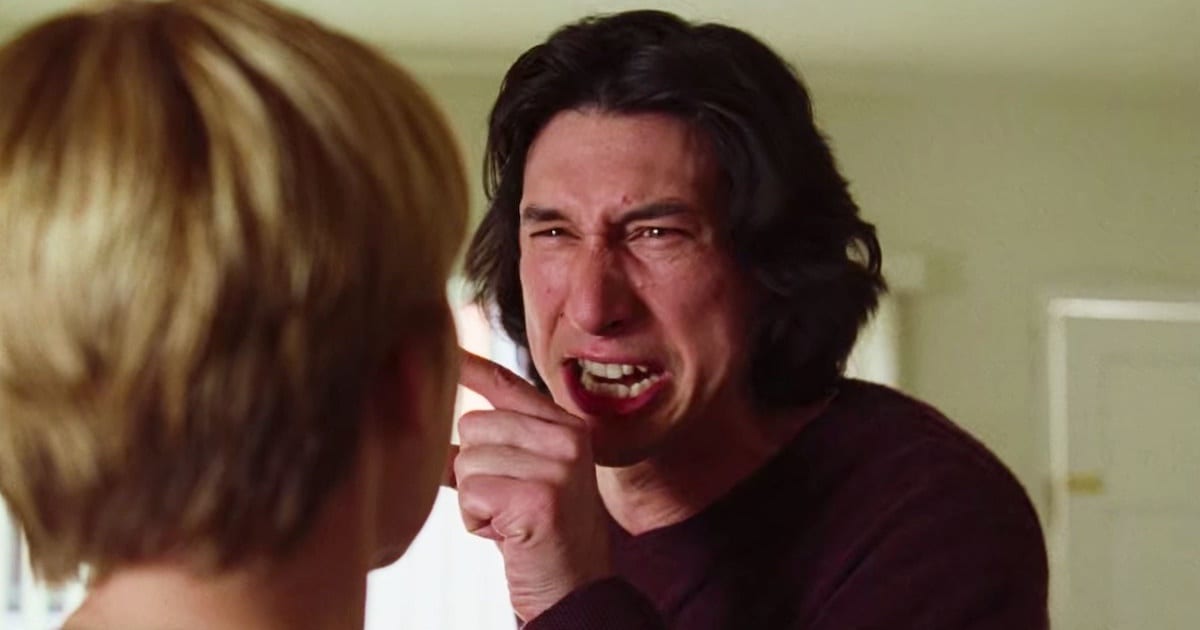 By the power of Netflix, Marriage Story, a fairly serious drama about an insanely contentious divorce, has been memed to death by Film Twitter and beyond. Stills of Adam Driver and Scarlett Johansson arguing about Baby Yoda to just about anything else have flooded timelines. I hope that the memery ultimately leads to more people watching the film — it currently sits as one of my favorite movies of 2019 — but for now, I’ll settle for some laughs.

It helps that Adam Driver has such an expressive face. Honestly, he might be the best yeller that we have in Hollywood at the moment. In Marriage Story, it all culminates in the aforementioned explosive argument, where Driver delivers the following soul-crushing line:

It’s devasting to see play out in the film, as both Charlie (Driver) and Nicole (Johansson) realize how far they plummeted and what divorce has done to them. But it’s also a hell of a moment to use out of context as a retort to a smartass on Twitter. Imagine: someone thinks they’re clever after getting two likes on one of their tweets, and you hit them with Driver yelling “I HOPE YOU GET AN ILLNESS, GET HIT BY A CAR, AND DIE!!!!” Below, I have lined out a few of the best instances to use the clip because if Twitter has taught me anything, it’s that people online don’t have real feelings, right? Hahaha… (Laughing to hide real pain.)

“Joker is One of the Best Movies of the Year”

Go on, tell me about the two other films you saw in 2019. Please, I’d love to hear about them.

If you think that Joker is actually one of the best movies of the year, that’s fine, I guess. We’re all entitled to have our specific tastes. But from my very unscientific research, I’ve come to the conclusion that most people that boast about how much they love Joker on Twitter are most likely a film bro or are 16 years old and very susceptible to seemingly provocative stories about psychology that actually don’t have anything to say about psychology or — dare I say — society. Hit ’em with an angry Driver.

“Okay #FilmTwitter, What is Your…”

Stop fishing for likes and retweets to boost your profile by shamelessly calling out to Film Twitter for engagement. This kind of passive engagement does nothing to further film discourse, and it gives film bros more opportunities to share their love for Joker, The Dark Knight, or any MCU film.

For your sins, you get a frumpy Adam Driver.

Anything Negative About Martin Scorsese

Marty is a saint. I don’t care what his views on Marvel movies are, he has done more good for world cinema than just about any other living filmmaker. Even if you completely forget about his incredible filmography, his work in founding the World Cinema Project would be enough to remember him by.

And no, The Irishman isn’t too long, either. You get a sadboi Driver too!

95% of Takes on Christopher Nolan

I’m continuing the war on film bros. In fact, Christopher Nolan is the patron saint of film bros. In their minds, Nolan has never done anything wrong; The Dark Knight is the greatest thing to ever come into existence, and he’s the most important filmmaker to have ever lived.

It makes a lot of sense: his films’ blend of technical prowess, impressive scope, self-serious tone, and good performances from A-listers can mask many issues in his scripts, which almost never make as much sense as you would have hoped when you step back, relax, and dissect their plot mechanics. I’ve also come to the conclusion that Nolan is actually a robot, which explains why his movies are relentlessly cold when they try to explain emotions. Nolan movies aren’t trash — they’re actually all very interesting in one way or another — but let’s all relax just a bit.

(In a related note, I’m actually looking forward to Tenet. Nolan looks like he is finally doubling down on his cold, unfeeling, and slightly cynical aesthetic.)

Another teary-eyed Adam Driver coming up!

Honestly, this sort of tweet might be my least favorite thing on Film Twitter. The perceived divide between critics and fans is only getting worse, and most of it comes from people having no idea how Rotten Tomatoes works. (Or how film criticism works in general, for that matter.) It’s just a review aggregator that comes together for a slightly misleading total percentage. That number doesn’t tell the whole picture.

Better yet, maybe try reading a few of those critics’ reviews. Pay special attention to those who are identified as a “Top Critic.” For the most part, these people have seen thousands upon thousands of movies and have very insightful opinions that are steeped in years of film knowledge. You might learn something!

The worst part of film discourse is that many people stop at that large fresh tomato or green splat as if that’s all they need to know about a film. There’s so much more to it! Enjoy the conversation, read criticisms. It makes talking film that much more fun and worthwhile.

For that kind of tweet, get REKT by a shrieking Adam Driver!

Picking a Side Between Charlie and Nicole in Marriage Story

Bringing it full circle here, a lot of discourse online after Marriage Story dropped on Netflix was about whose side the film was ultimately on, or if either Charlie or Nicole was in the right. That’s not the point! Marriage Story is interested in depicting how divorce is the real villain. It ruins genuine feelings that two people will always share for each other, regardless if they stay together or not.

If a film bro complains about how awful Nicole is and that she’s the reason the divorce became so ugly in the first place, a yelling Adam Driver should be in their replies.

Thank you for reading! What are your thoughts on Adam Driver Yelling in Marriage Story? Comment down below!

[…] mid-2000s, Shrek has since regained popularity on the weird part of the internet with a litany of memes and videos. If you aren’t aware of the phenomenon to which I’m referring, quickly […]

Look, I know you’re the boss, and I write here but…. I’ve been chewing over this all day and 5 beers in….the take that “Chris Nolan is emotionless” dropped into wrong a decade ago. Inception? Come on.

Hahahahahaha!!! I stand by it! My problem with Inception is that I don’t buy the emotion between Leo and Marion Cotillard. Nolan’s scripts have a tendency to explain emotion rather than express it, it’s the same issue I have with Interstellar. So even though there’s “emotion” in his movies, I find that he’s explaining to me why I should care instead of actually conveying the emotion behind it.

Podbi (Or PeaPod, We Couldn’t Decide on the...