‘Red Notice’ Might Be the Worst Movie of the Year

Heed my words: this film is really that bad. 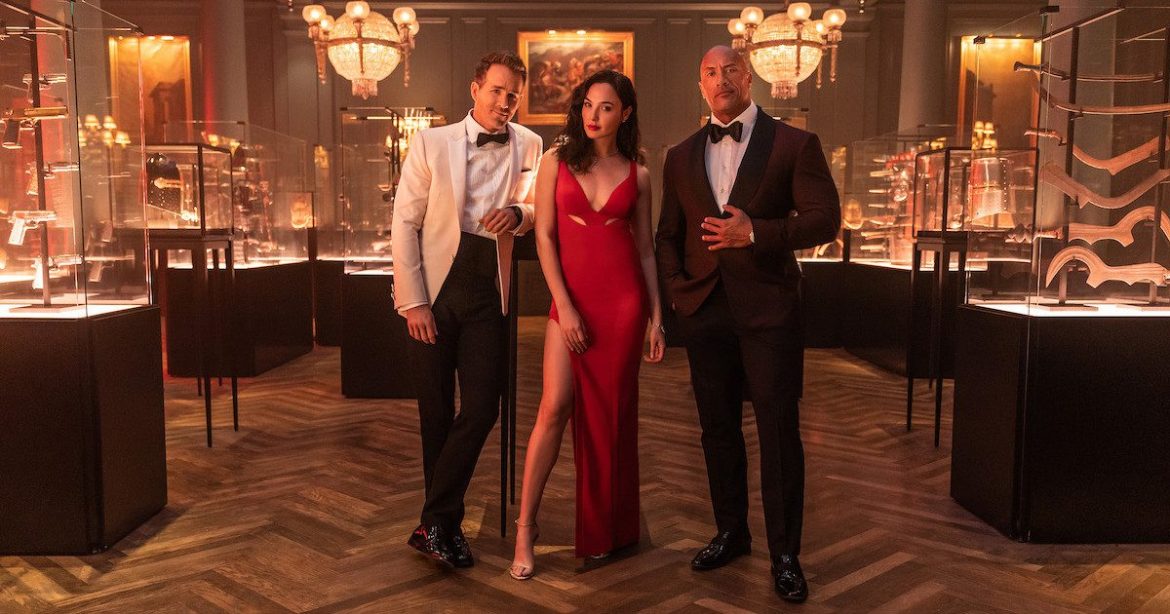 Dwayne ‘The Rock’ Johnson might have definite star power but he has a track record of starring in terrible films, usually mindless Disney fluff or inoffensive PG-13 action vehicles (gone are the days when he would take an actual risk, like starring in Richard Kelly’s goofy dystopian science fiction film, Southland Tales).

I’ve enjoyed the occasional Ryan Reynolds film, but honestly, I think I’ve had enough of his comedy schtick. Maybe in a decade or so, I’ll watch Deadpool 25, or something.

Gal Gadot, bless her heart, has never impressed me as a performer. Sure, she looks convincing in an action sequence, but her acting range, at least from what I’ve seen, seems limited to ‘looking cool’. Admittedly, I’ve only seen her in a few films. I’ve seen her in some forgettable comedy with Jon Hamm (at least I think it was Jon Hamm). I think she was in one of the Fast and Furious films — no idea which one, and I honestly don’t care. I do remember seeing her in Batman v Superman, and I remember she was throwing a lasso around. I’ve also seen her in the baffling theatrical cut of Justice League. (Sorry guys, I’m not going to watch the four-hour Zack Snyder cut, I simply cannot do that to myself.) Reportedly, she’s much better in Wonder Woman, the first film at least.

Then why did I watch Red Notice? Well, occasionally I go against my better judgment. I figured it was Saturday night, the perfect time for some throwaway entertainment. Perhaps it wouldn’t be so bad. There was a murmur of this being Netflix’s most ‘expensive’ movie — a report that surely wasn’t some marketing ploy from Netflix itself. But the point still stands: if they threw away this much money on a film, it can’t be that bad, can it?

Oh yes, it can. It’s so bad in fact that I’m actively writing this review just to dissuade people from watching it. I wasn’t supposed to write a review, but after seeing it, I just can’t bear the thought of it receiving anymore streaming attention. You could say that this review is my way of doing a public service.

Whatever you do, don’t watch Red Notice. It’s not worth it. It’s nearly two hours of your life you can never get back — I just realized I could have finally watched David Fincher’s Mank instead! What in God’s name am I doing with my life?

The MacGuffins of the plot are three golden eggs, which used to belong to the legendary queen Cleopatra. The three eggs are scattered all over the globe. One of the eggs is the subject of a museum unveiling in Rome. FBI Profiler, John Hartley (Johnson), knowing the egg will be the target of master thieves, arrives there to keep an eye on it.

In front of a crowd of onlookers, Hartley proves that the golden egg has already been switched, thanks to the mechanizations of wise-cracking master criminal Nolan Booth (who is naturally played by Reynolds). For some inexplicable reason, Nolan runs away from the crowd of people, making him immediately a suspect.

Eventually, Nolan is caught in his remote hideout in Bali. Since he’s been wanted in numerous countries all over Europe, he’s taken to a secluded prison somewhere in the mountains of Russia. Soon enough, the egg is stolen once again by another master thief, called The Bishop (Gadot).

Not only that, Hartley is framed as a secret accomplice and put inside the same prison as Booth — very convenient. To escape and clear his name, Hartley has no choice but to work together with Nolan. And they must do that before the Bishop can get her hands on the remaining eggs. Lame comedy and action ensue.

For how much Dwayne Johnson is touted for his charisma, none of it shows in Red Notice. Understandably, he plays the straight man to the comic relief, yet he doesn’t so much play the straight man, more so a man who’s perpetually annoyed of being in this movie. Johnson seems strangely disengaged throughout the movie. It’s been a while since I’ve seen a talented performer look so frustrated in having to be in a movie.

The worst part of all, and the one thing that could have possibly salvaged this movie: there’s zero chemistry between Johnson and Reynolds. Reynolds does his thing, providing ‘quick-witted’ snarky comments, but there’s never any memorable moment of banter. Johnson gives Reynolds nothing to work with. Just because they are two megastars, doesn’t mean they automatically gel on screen.

One could blame it on bad directing, yet Johnson has worked with Rawson Marshall Thurber numerous times. And though I haven’t seen any of these films, and certainly will never see them, Johnson is reportedly one of the best things about those movies.

Perhaps there was some behind-the-scenes tension between Johnson and Reynolds. Perhaps he couldn’t keep up with Reynold’s improvisational talents, and felt a little threatened. Or perhaps The Rock was just exhausted from all the mediocre, forgettable movies he’s been starring in.

Reynolds plays the role exactly as how you can imagine it. Except nothing of what he says remotely is funny. Here are a few of his ‘hilarious’ lines: (in reference to the sultry leather jacket Dwayne Johnson is wearing) “somewhere there’s a very nude cow out there, whispering, ‘worth it'”; (when a heavily armed SWAT team invades his hideout) “hi guys, don’t take your shoes off or anything); (responding after being told he will be sent to the worst prison in the world) “your Instagram account?”

Yeah, absolutely hilarious. Reynolds is just on autopilot here. Since the film is PG-13, Reynolds is also relegated to keep his snark to a more politically correct level.

The script attempts to infuse some emotional background to the two main characters, as they confess to each other that they both have had a troubled relationship with their father. The notion of two crooks sharing a troubled childhood and bonding because of it is an obvious yet usually effective tool for a mismatched buddy comedy. But here, these scenes feel shoehorned in. Almost as if the screenwriter realized that both these characters have nothing going with them. Did I mention that these scenes are cheesy and forced? I probably don’t need to.

Gal Gadot is miscast as the seductive master criminal, The Bishop. She’s fine in the action sequences but when it comes to providing some comedy, she fails miserably. Take the scene in which she opens up emotionally, like a patient to a therapist, to a tied-up hostage. It’s obvious that the scene is supposed to be funny, but it’s not. It is, however, clear evidence of Gadot’s lack of comedic timing. I couldn’t help but imagine how a more comedic performer, like Kristen Wiig for instance, could have handled that scene.

2016’s Ghostbusters proved that great comedians can’t save a bad script. You need a good script as well as talented comedians. Maybe it isn’t Gadot’s fault. If you’re hoping for a fight scene between her and The Rock, well, you get one, but it’s so poorly edited that you can hardly enjoy it. The film also tries to pretend there’s some sexual chemistry between the two, but there’s not. I’ve seen more sexual chemistry between Dwayne Johnson and Jason Statham in the trailer for Hobbs and Shaw.

The action scenes range from forgettable to unforgivably sloppy. One chase scene seems like a badly copied version of the jungle chase scene in Indiana Jones and The Crystal Skull — which is a very bad film to try to emulate.

The fight scenes are a mishmash of quick cuts. It’s hard to see what’s going on. Other times you can clearly see that most of the action scenes were done by a second-unit team, using obvious stunt doubles. If you’ve seen any John Wick movie, you realize quickly how little this film has to offer on the action department.

I can moan about the plot holes in this film, how little makes sense but that’s the least of its problems. The supposed twist later in the film is supposed to ‘blow your mind’, but all it does is make me wonder about the director/screenwriter Rawson Marshall Thurber’s intentions: did he actually think he was smart? Does he think that having a twist in the film automatically makes it smart? Or did he know he was making a hack script all along and was he just amusing himself by throwing in the occasional ridiculous twist?

While the film takes place in several exotic locations throughout, most of it is portrayed via shoddy green screen magic or obvious sets. It’s honestly shocking how bad a lot of it looks. The film supposedly cost a whopping $200 million. Besides the obvious — the gratuitous paychecks to the three main stars — nothing on screen justifies the cost. Supposedly this film cost more than this year’s Dune and just look at the difference between the two.

Maybe they wanted to start a new franchise. It feels as cynical as 2017’s The Mummy — Universal’s attempt at making a Marvel-like franchise named the Dark Universe, starring their Universal monster line-up. Similar to that, you have a bland, piece of corporate junk masquerading as a movie. Inoffensive, uninspired, and easily marketable overseas.

Red Notice is an expensive piece of lifeless filmmaking. It represents the worst of the modern blockbuster; it’s riskless, bloated, filled with cheap humor, lacking personality, and banking everything on star power and digital wizardry.

I seriously thought 2017’s Baywatch would be the worst movie I would ever see starring Dwayne Johnson (granted, I’ve avoided most of them). And don’t get me wrong, Baywatch is a miserable experience from beginning to end. But upon retrospect, I think I’d rather watch Baywatch than Red Notice. I thought I would never live in a world where I would write these words, but here I am.

Thank you for reading! What are your thoughts on Red Notice? Comment down below!

Damn, I wasn’t clear enough in the review ;) And I should watch Mank too. It’s one of those movies I tell myself I will watch but then never do.
But thanks for the kind comment, much appreciated :)

This is becoming a Ryan Reynolds festive tradition
https://moviebabble.com/2019/12/15/6-underground-makes-a-late-bid-for-worst-film-of-the-decade/