‘Psych 3: This Is Gus’ Does Exactly What It Should

This movie does what the show did best, but... for longer. 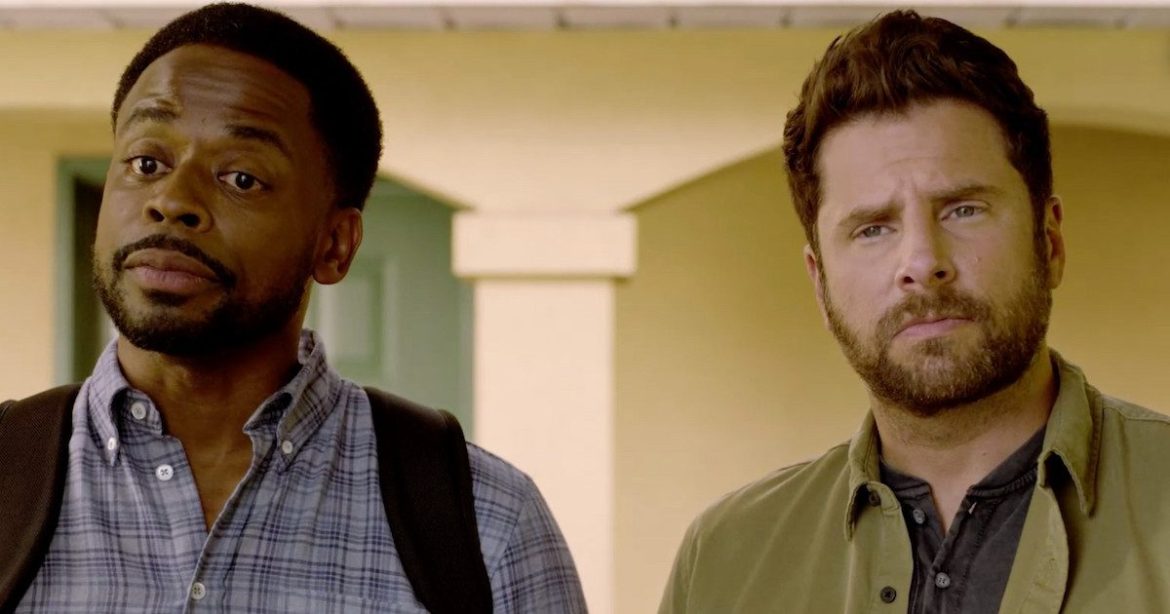 It all began when my friend Alisha mentioned the TV series Psych during a conversation we were having. She told me about the humor, the pop culture references, and at its core: the strong friendship. I decided I had to check it out. I watched the first two episodes, then became distracted, as I do.

About a month later, I picked it back up. This time, I went all in (as I also do). I watched it pretty much daily — this binge coincided with a health crisis, so I wasn’t doing much else. This continued until I’d seen every episode (including the musical), and the first two movies. I wish I could tell you this took me a whole year or something. It did not. Psych quickly joined my roster of fandoms, as you may have guessed. More on those in a minute, because worlds collided in a big way, here.

When the opportunity to review the third film, Psych 3: This Is Gus presented itself, I knew I had to take it. It would have pained me not to, so, here we are.

Psych 3: This Is Gus essentially picks up where Psych 2: Lassie Come Home left off, but with a few months of time passed. So, Gus’ (Dule Hill) fiancée Selene (Jazmyn Simon) is quite pregnant, and Gus is hyper-focused on getting married “in time.” Some questions arise regarding Selene, and tracking down the truth is essentially the plot, here. As with the first two Psych-franchise (Psychverse?) movies, this plays out like a long episode, versus having a cinematic feel.

There is more said about Lassiter’s (Timothy Omundson) stroke recovery, of course. To be honest, this part of the movie was the weakest at first, which was disappointing. However, it developed into something far less schmaltzy throughout the course of the movie’s runtime.

A funny (with a few serious moments), side story involving Chief Karen “I’m not changing my name!” Vick is also woven throughout. Basically, everyone you’d expect to see is here, as they should be.

Psych is arguably best known for its abundance of pop culture references (many being used as fake names for Gus). Honestly, this is something I looked forward to most with each episode or movie. This one gives us a reference right out of the gate, as there’s a play on the DC and Marvel universe openings that is very well done.

As I mentioned in the introduction, there were also references to some of my dearest fandoms in this movie. Chief among them was Wham!, represented as a recurring gag, and a hilarious music video parody. Also mentioned? Adrien flipping Brody (my favorite actor of all time, in case you didn’t know that yet). You could say I was happy about both of these.

Perhaps even funnier than references to other shows and movies, are references to their own. It’s almost a fourth wall break, without having to look directly into the camera. I don’t want to spoil them for you, if plan to watch this. However, I will tell you they are the most on-the-nose (and plentiful) they’ve ever done. And they’re hilarious.

What made Psych stand out above other shows, at least for me, was the friendship between leads Shawn (James Roday Rodriguez) and Gus. The characters have known each other since childhood, and the chemistry between these two actors is spot on. They are easily believed as life-long best friends.

The storyline here touches on how life events change friendships. I thought that was a refreshingly realistic topic to address, and appreciated it very much. My friendships have definitely evolved over the years, be it through physical or emotional distance. Once being (or in Gus’ case, becoming) a parent comes into play, things change all the more. That doesn’t mean they necessarily have to end.

As I touched on earlier, the weakest spot is probably the first few minutes with Lassiter. I actually thought it would turn out to be a dream someone was having, because it was kind of sappy and, even for this universe, over the top. However, in retrospect, I think it was supposed to call to mind the dramatic nature of the show This Is Us (on which Omundson also appears). Hence the film’s title (and font). If that’s the case, a lot can be forgiven, here.

Also, I don’t find Selene that compelling of a character (though, I think Simon does a great job), so having so much of the story focused on her wasn’t my favorite thing. Granted, it worked to pull our other characters into the story, and gave them something to do. It also pulled Allen Maldonado into the Psychverse (just go with it), who gave a wonderful performance. Even so, the story still felt a bit stretched out to me, and may have worked better as more of a side plot.

Even though Psych 3: This Is Gus has arguably the weakest plot of the three, it is still a lot of fun. Especially for fans of the show, such as myself. The meta content is perfectly done, and as always, timed and delivered with surgical precision. And that Wham! gag, which virtually serves as a side plot, was the icing on an already triple-tiered wedding cake of goodness.

Thank you for reading! What are your thoughts on Psych 3: This is Gus? Comment down below!