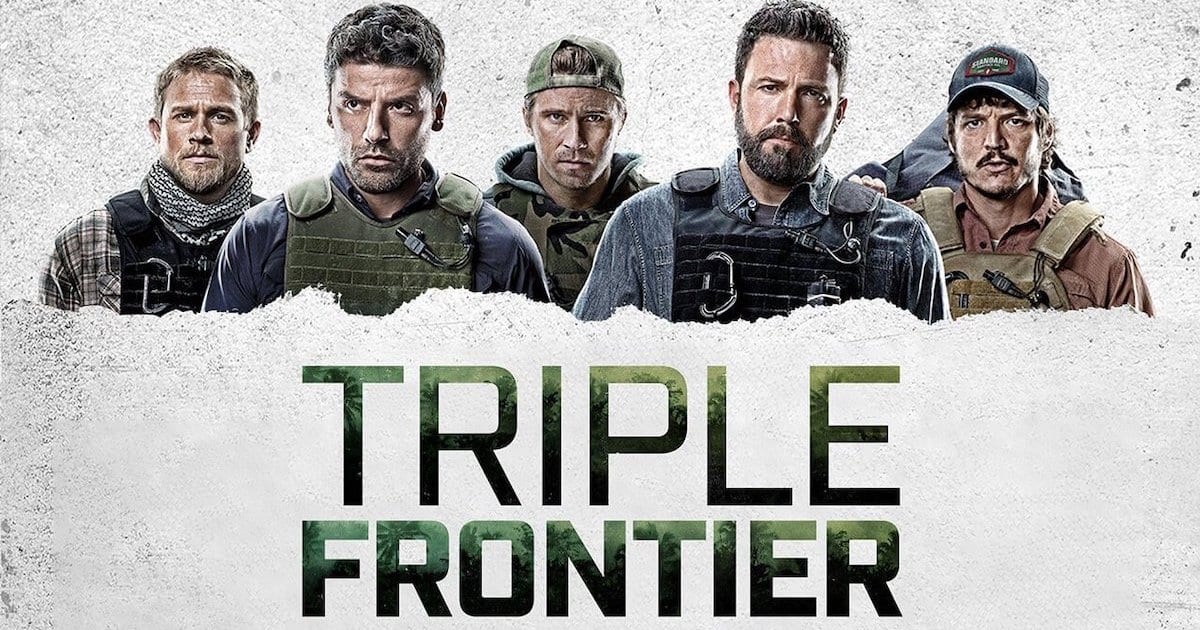 Triple Frontier had me feeling a bit nostalgic for a time when the crime thriller reigned over everything else in Hollywood. A few decades ago, when an A-lister was looking for a big-time project, they grabbed a gun and overacted for two hours in a wave of grim crime and wonderfully toxic masculinity. I didn’t know what true beauty was until I saw Commando.

Since they began creating original movies, Netflix has developed a lot of tweeners; movies that have slipped through the cracks of the modern movie machine. It’s with movies like Triple Frontier that I gain appreciation for this service that is slowly taking over everything that Disney hasn’t already taken for themselves; we might not have gotten it without the streaming leader.

After years of serving their country, a group of former Special Forces operatives has nothing to show for it. Santiago “Pope” Garcia (Isaac) struggles to keep up with his quickly deteriorating knees and neck; Tom “Redfly” Davis (Affleck) is drowning in debt after his divorce; William “Ironhead” Miller (Hunnam) continues to make the same war propaganda speech to soldiers on a weekly basis; Francisco “Catfish” Morales (Pascal) is relegated to selling drugs with his new child and lack of income; and Ben Miller (Hedlund — I guess he wasn’t cool enough to get a nickname) gets his brains sloshed around in the octagon for local, low-level mixed martial arts matches, fighting for a few hundred bucks in every bout.

But when some new information on the whereabouts of a cartel leader (Gallegos) and his large wealth comes to light, the group decides to ban together and finally fight for their own benefit.

A Note on Ben Affleck

I find Ben Affleck to be one of the more fascinating movie stars we’ve ever had. His ups and downs as both a performer and a human have been well-documented, but they even bleed into all of his films. The meta-narrative is always present with Affleck, who, after facing a few personal problems, plays a recently divorced father who simply wants to find meaning and be able to provide for his daughter again in Triple Frontier. I’ll let you connect the dots there.

The fact is that Affleck has been involved in projects with this kind of meaning his entire career. Now after a few years have passed, it’s obvious that even David Fincher blatantly used Affleck’s persona to thicken the layers of Gone Girl.

I’d like to think that we’re all a bit fascinated with Ben Affleck, the star. He’s lived such a public life for so long that it’s hard not to think about everything he encapsulates when he takes on a role. From Good Will Hunting to Chasing Amy to now, Affleck remains a force in the industry. I hope it stays that way for as long as he chooses to work.

Let’s Get the Gang Together!

In many ways, Triple Frontier is a throwback to films like The Dirty Dozen or The Wild Bunch. You’re quickly alerted to the kind of movie that Triple Frontier aspires to become — or comment on — as Metallica’s “For Whom the Bell Tolls” belts over the initial sequence. And if you’re still not sure what kind of movie this is, it splices in Bob Dylan’s “Master’s of War” later on just for good measure. This movie is all about men dealing with masculine issues. It’s constantly wrestling with its own masculinity, so much so that many will only be able to view this film as a relic of previous, steroid-infused decades.

We’ve seen these kind of movies stretched into other genres and outright lampooned over the last decade. (One of my favorites is unquestionably the criminally underrated MacGruber.) We’re at the point where each genre has its own offshoot of incredibly self-aware and meta takes on what came before. And while I absolutely adore the work of Phil Lord and Chris Miller and others like them, it’s oddly refreshing to see a straightforward retelling of men coming together for a mission. Such a construct allows for the intentionally (and unintentionally) entertaining bits of this movie to shine as these charismatic actors show off their toughness and deft overacting skills.

We love these kind of movies for their dramatic weight and self-unaware machismo which comes together in a delicious stew of entertainment, unlike what Hollywood has offered in the past decade or so. Triple Frontier is smart enough to comment on this notion. A Tale of Two Halves

Though Triple Frontier has J.C. Chandor, the director of the great A Most Violent Year, calling the shots, so there’s more here than empty shootouts and blind patriotism. The film can quite literally be split into two, with the first half working as a cartel heist and the second acting as a survival mediation of sorts.

There’s plenty of moments where our main group of former patriots offer some pretty badass moments, but those same moments aren’t presented in a way that makes these individuals appear “cool.” These characters are damaged; they’re conditioned to be really, really good at a select number of possibly murderous things. J.C. Chandor never stylizes their movements, either; these men coldly go about their business. “Clinical” is the best way to describe them in action. As the tension heats up, you quickly learn that they aren’t cool. Instead, they’re quite sad and hopeless.

The plot construction allows this idea to take root by putting what would be the main climax of most action movies smack dab in the middle of it. The extended falling action allows for the possibly inappropriate level of masculinity to wane. These former soldiers understand that their growing greed in combination with the high stakes of their mission makes everything ultimately futile.

The utterance of the phrase “this is not what I signed up for” is far beyond a cliché in the genre at this point. (Am I the first to coin the “super cliché”?) And that phrase is used in Triple Frontier, but it takes on a different meaning as the ethos of these men withers away. Who are These Characters?

Still, the road isn’t as bumpy as you would like, which hurts Triple Frontier on a surface level. Tragedy strikes and loss is certainly felt, but the entire journey feels all too standard and plain at times.

This issue stems from lackluster character work in my opinion. Triple Frontier assembles a truly fantastic cast full of stars and overqualified supporting actors, and their personalities as performers are pulling most of the weight. Like many of these movies, each of these characters has their one defining piece of background information that is used to power their entire persona…and hopefully get you to buy in entirely so that the ensuing carnage has more stakes. Affleck’s Redfly is the divorcée who just wants to do right by his daughter; Isaac’s Pope is the quickly aging veteran that can’t keep up anymore; Pascal’s Catfish sells drugs to feed his family…you get the idea. But at the end of the day, I can’t fully describe these characters besides those quick bits of screenwriting. I don’t fully understand their tragic nature, even if it comes across in a moderately satisfying manner.

I didn’t need melodrama, but I needed more defined character traits to understand the futility that Chandor was attempting to discuss. You still have a brilliantly produced and layered film in Triple Frontier, but I would never go as far as calling this film “great.”

We’ve gotten to the point where a classic take on a getting-the-gang-back-together movie is oddly inventive. I mean, how often does a movie give its characters names like Redfly, Ironhead, and Catfish? (The clear answer here is not nearly enough.)

Triple Frontier blends a lot of the macho aggression that makes these movies work with enough subtext to make something more than just some douchey, self-unaware movie made by a director who watched Heat and Bloodsport between each of their bicep curl-only workouts.

Would I have liked more character work? Sure, but sometimes watching stars do their thing is more than enough. 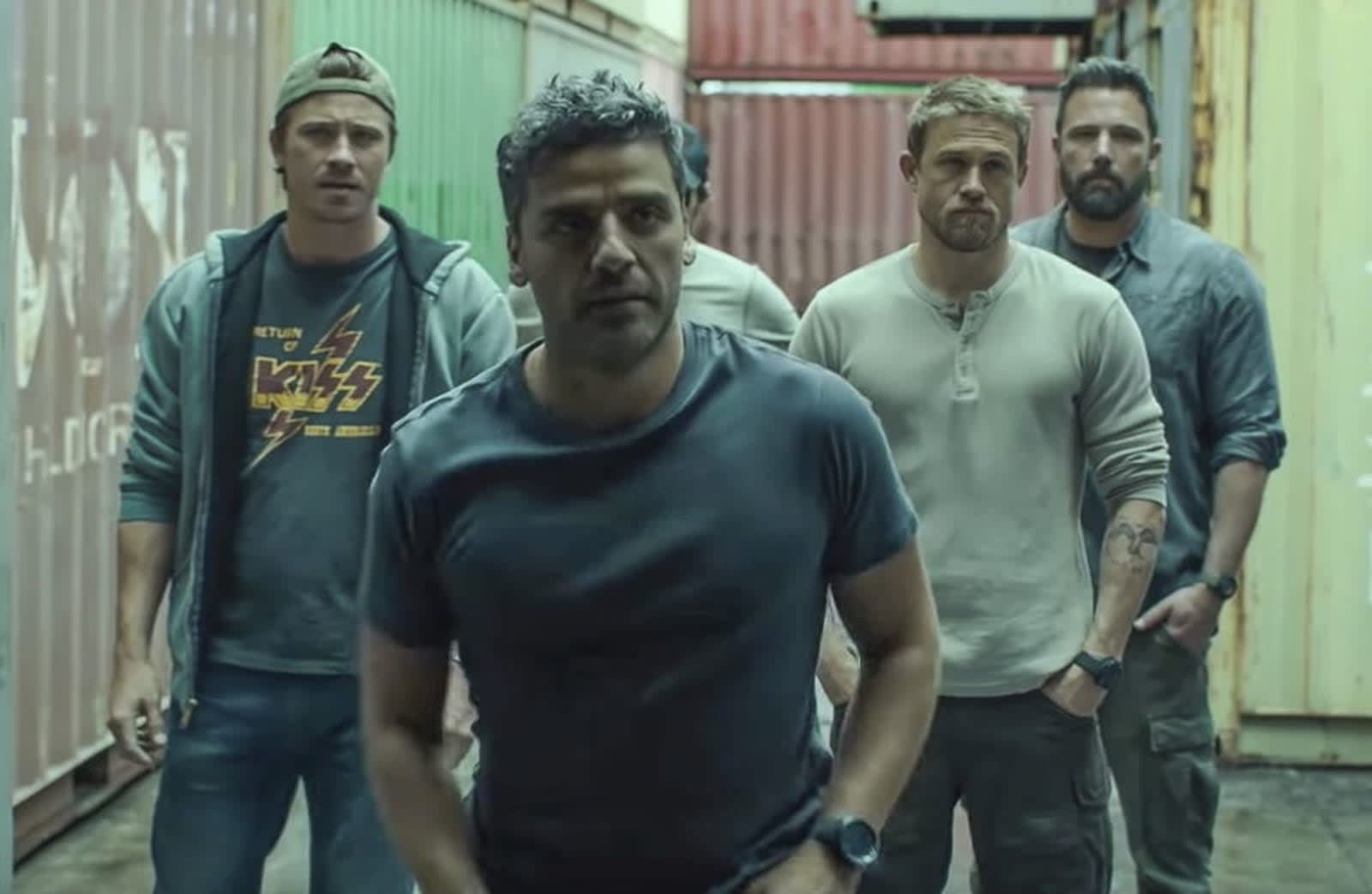 Thank you for reading! What are you thoughts on Triple Frontier? Comment down below!

[…] felt. Elena’s editor explains point-blank that sometimes “it’s just business”. Ben Affleck’s character meets with a shadowy politician who explains how important it is to grab a big enough piece of a […]

Nice read, Nick. My impression of this movie, purely from the trailer alone, was exactly how you’ve reviewed it – a special skill, I know ;-) :-)

Hooray!!!!! I hope you come back to comment regularly! 😁 thanks for your thoughts!

I watched this movie recently and I like you, I appreciated the play on genres the movie took for its inspiration. For me, I felt it was ‘Ocean’s Eleven’ meets ‘Sicario’.

Pope and Redfly (Oscar and Ben) clearly were the most interesting characters because they felt the cohesive in the story. Every other character…I still don’t know their names (and don’t care to know them.)

I also agree that the movie wasn’t great, but it was decent enough for to me watch it all the way through and actually want to know what was going to happen. All in all, good film but it needed a WHOLE lot more substance. B-

Obviously I agree! 😂😂😂 i wonder if one more pass on the script might have done he trick? Like you said, things feel a tad underwritten

I love that bit that you did about Affleck being a force, he so is. There is always a little bit of himself in every character he ends up playing.

I like to think that he plays a version of the same person in each role, but it’s in the best way possible!

He definitely deserves it!!