‘Hustle’ Quickly Joins the Ranks of the Best Basketball Movies

Jeremiah Zagar (and Sandler) manages to bring plenty of authenticity to the sports movie formula. 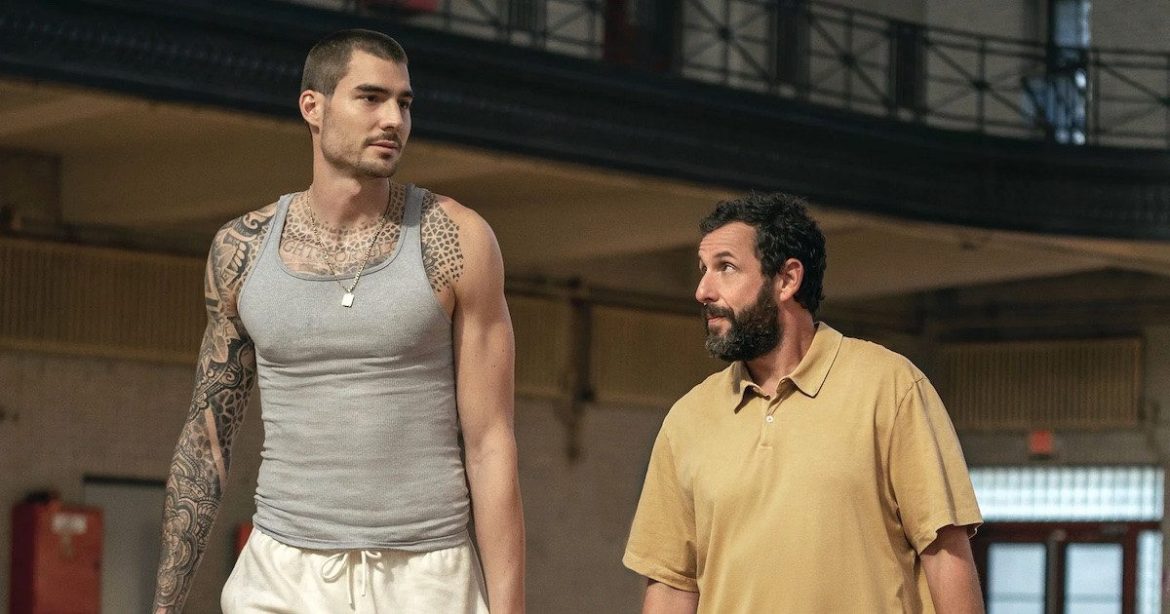 Is it weird to say that Adam Sandler is now one of our most consistent actors? Let’s break it down. Dramatic Sandler is on a pretty serious tear with The Meyerowitz Stories (severely underrated), Uncut Gems (an unqualified banger), and now Hustle (one of the better modern sports movies). Your mileage may vary on Comedic Sandler (mine certainly does), but you know exactly what you’re getting every time, that is, something made with all of his friends in a nice location that your kids are sure to love. In either vein, you know what you’re getting before you press play.

That reliability is something I’ve come to admire over the years. I followed what I imagine is a pretty familiar path in my relationship with Sandler. I laughed hysterically at the nonsense humor in Billy Madison as a teenager. Then, after studying Serious Artistes™ like Godard and Welles in intro to film courses in school, I became insanely frustrated that he was wasting his talent on lowbrow, low-effort comedies instead of stretching his acting muscles more like he did in Punch-Drunk Love. Why wasn’t he creating capital-A Art every time out?

But now, I’ve come all the way back around to appreciating Sandler for who he is. He’s very invested in his family, and he’s been pretty explicit about how he made more kid-friendly fare because he had some young ones of his own. And let’s be honest, if our companies wanted to take us on multi-million-dollar vacations with our closest friends and take care of them with a hefty salary while occasionally having a camera pointed in our faces to say a fart joke, we’d do the same thing. We’re all striving to make our work life as painless as possible. And it’s not like those movies aren’t successful. Almost all of them make money or account for a lot of Netflix streams, which allows Sandler and Co. to do it all over again. They might be bad, but there’s unquestionably a market for them. They’re just not for me. But that’s okay because Hustle decidedly is.

To be fair, as a native Philadelphian with a slightly concerning Sixers obsession, I was always going to like Hustle on some level. Between this and Uncut Gems, I’m starting to convince myself that Sandler is taking movie ideas straight from my head. Sandler stars as Stanley Sugerman (a name that sounds like it comes from the peach basket days of the sport), an international scout who dreams of ditching travel for a spot on the Sixers’ bench as an assistant coach. To his surprise, the Sixers owner Rex Merrick (Robert Duvall) does just that for him, allowing Stanley to stay at home with his wife (Queen Latifah) and daughter (Jordan Hull). However, Rex quickly passes away, leaving his combative son Vincent (Ben Foster in a very noticeable bald cap) in charge. Stanley is quickly demoted back to the scouting department and put back on assignment overseas.

It’s then that Stanley meets Bo Cruz (played by NBA forward Juancho Hernangómez), hustling people on an outdoor court in Spain. He sees Bo as the next big thing, the only problem is that he doesn’t have Vincent’s approval to bring him back to the States for pre-NBA draft workouts.

You can probably guess where Hustle goes from there. A sports story about two down-on-their-luck guys hoping for some sort of redemption has been done to death, and Hustle certainly doesn’t break the mold, but a familiar story can take on a fresh feel with the right perspective. Authentic basketball movies are rare. You can’t teach an actor to hit a step-back three the same way you get one on a chicken and steroids diet for a boxing movie. Hustle is a rare producer accomplishment, thanks to LeBron James’ SpringHill Company, which helped get the NBA and a ton of current players and coaches onboard for the film. The basketball action is fantastic, especially when Hernangómez starts doing some crazy training with a massive tire. (A note to filmmakers: if you’re making a sports movie, you absolutely must include a huge tire workout as part of your training montage. It’s way cooler that way.)

Director Jeremiah Zagar deserves the lion’s share of the credit. The main reason so many sports movies don’t pivot to working with legit athletes is obvious: a lot of them just can’t act. Zagar puts all of the NBA players in the best situations to succeed onscreen, especially with Hernangómez, who clearly has a certain level of raw charisma, but never has to go outside of his comfort zone. It helps that most scenes are constructed such that he gets to react off of Sandler. He never has to deliver a long-winded monologue, and you wouldn’t want him to either. Zagar understands that the best part of working with legitimate basketball players is using their physicality to carry their performances. Bo Cruz ferociously blocking someone’s shot says everything you need to know about him in a given scene.

That said, Anthony Edwards delivers a genuinely fantastic side performance as the film’s default antagonist. Hustle never really seems interested in building his fictional character Kermit Wilts into a bonafide sports movie villain, a move that both robs the film of narrative tension and adds to its realism, but Zagar absolutely lets Edwards feast with what he’s given. Similar to his work with Hernangómez, Zagar puts Edwards in the best situation to succeed, with 90% of his dialogue being whispering, biting trash talk, which is probably what Edwards does during games anyway. Nevertheless, it’s a major feather in the cap for arguably the NBA’s most exciting, charismatic rising star.

Zagar’s clever direction makes for great immersion into this world, but it certainly does not hide Hustle‘s many plot contrivances. You eventually get to learn about Stanley’s tragic past, which even Sandler seems unsure of as he struggles to deliver it convincingly. Cruz’s similarly tragic past functions more as a perfunctory plot device that has to be there in order for the character to grow rather than something more lived-in and honest. Most of the other major plot beats more so work as filler to get to the next basketball set-piece, which leads to plenty of very awkward, cameo-filled transitions. A few too many athlete appearances feel like a producer running onto the set and saying, “Hey! [insert famous basketball icon here] is available for two hours next Wednesday, where can we fit them in?” Scenes between Sandler and Queen Latifah talking about their family are just as mechanical.

Even so, Sandler is always there to keep Hustle together as it threatens to come undone. From the first time you see his disheveled look, Sandler imbues Stanley Sugerman with far more humanity than is on the page. There’s a certain amount of cynicism that Sandler captures deftly. His delivery of, “guys in their fifties don’t have dreams, they have nightmares and eczema,” is an all-timer. Hustle might work better for those who are already basketball nut-jobs like myself that are desperate for even competently made basketball movies, but watching Sandler cook is a pleasure that seems to only be getting better as he settles into middle age.

Thank you for reading! What are your thoughts on Hustle? Comment down below!