‘Guillermo del Toro’s Cabinet of Curiosities: Dreams in a Witch House’ – This Episode Has “Gnawing” Problems

This second Lovecraft adaptation of the series proves to be the unfortunate low point. 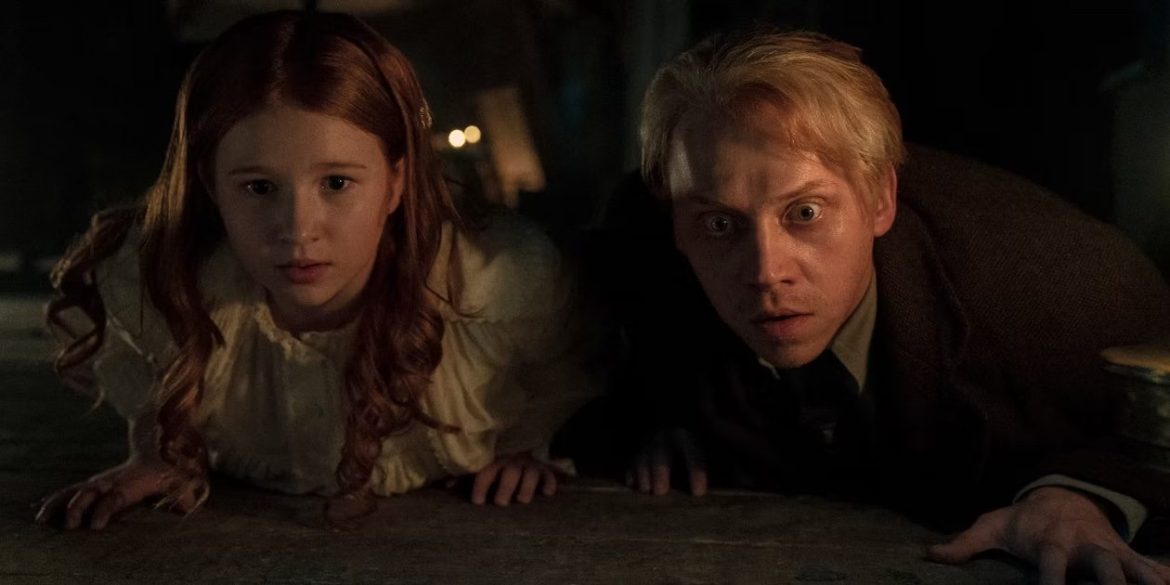 Catherine Hardwicke wouldn’t be my first choice for directing an episode of an anthology horror show, especially considering the damage she wrought upon the vampire subgenre. Looking at her filmography, there’s nothing to indicate that she would be the ideal person to adapt H.P. Lovecraft’s Dreams in the Witch House either. But Guillermo del Toro apparently thought differently, so here we are. If only I had been involved during pre-production, I could have warned him. Just like how I could have warned him about doing that stupid giant robot movie. Unfortunately, he never seems to return my calls.

The story takes place during the original story’s publication date, 1933. As a child, Walter Gilman (Rupert Grint), witnessed the death of his twin sister, Epperley (Daphne Hoskins), as well as her spirit being dragged into a forestry dimension. Vowing to save her, he travels the country, searching for authentic spiritualists and psychics to help him. One day, he overhears a group of indigenous people, talking about how they “visit the forest but don’t leave ripples.” He engages them and discovers that through the imbibement of an ancient cocktail called “liquid gold,” he can travel to this purgatorial dimension where his sister’s soul is imprisoned, known as “The Forest of Lost Souls.”

But whenever he travels there and tries to take his sister back into the living, supernatural vines drag him out. He finds a possible solution by staying in a house formerly owned by a witch called Keziah Mason (Lize Johnston), whose witchcraft consisted of traveling to other dimensions. Using the house as a vessel, he stays the night, but the eponymous witch has different plans for him.

The late great Stuart Gordon had previously adapted this story in another anthology horror show, Mick Garris’ Masters of Horror, but in a modern setting and a significantly smaller budget; though as Stuart Gordon fans know well, a smaller budget has rarely diminished his ambitions.

Sadly, this episode is undoubtedly the weakest of the season. It’s even worse than the previous Lovecraft adaptation, Pickman’s Model, as that one at least featured Crispin Glover in a wacky accent.

This doesn’t mean it’s not worth watching, though. There’s a lot to like here.

Rupert Grint does an excellent job as the obsessive sibling willing to venture through hellish dimensions just to save his sister. There are even a few touching moments between him and his sister, particularly in their final scene together.

Visually, this episode is a stunning piece of television. It looks like it takes place in the same world as Pan’s Labyrinth. It has that same, dreamy, fairytale feel to it. A place of imaginative wonder and unbearable terror, usually at the same time. “The Forest of Lost Souls” especially is wonderfully visualized with massive barren trunks wrapped in vines, gloomy fog, and dusty particles that billow upwards. Though it does annoy me how quickly Walter finds his sister there. Surely, this particular dimension must house thousands of souls, at the very least?

But there are also many problems. One might originate from its source material. The character of Jenkins Brown (DJ Qualls), a rat with a human face, feels out of place here. Though he was part of the original story, he feels like an unnecessary add-on here. The cartoony CGI doesn’t help either. Any time he’s on screen, the tension fades away and it feels like you’re watching some third-rate Harry Potter rip-off.

Then there’s the occasional piece of hokey dialogue, mixed in with an abundance of exposition. One revelation is continually explained through the words “mutually exclusive,” and it’s repeated so many times, you could make a drinking game out of it.

The witch itself is nicely designed, though is shown a bit too early. It would have been better to leave her in the shadows first, to tease the audience before revealing its look.

And whenever her rodent sidekick appears, the tension immediately dissipates. Similar to the witch, perhaps it would have been better not to show Jenkins’ face before the end, or to at least give him a more ominous voice. Or, just cut the character altogether.

There is a good chase sequence in “The Forest of Lost Souls,” but there are no other remarkable setpieces. One particular confrontation in a church even feels like you’re watching a deleted scene of The Nun.

Finally, there’s the disappointing finale, which is both predictable and overly mean-spirited. There’s a clear moment where this story should have ended, and if it had ended then, this would have been a decent episode. Even though something similar happens in the original story — mind you, this episode takes enough liberties to annoy Lovecraft aficionados — it doesn’t feel right here. It feels unnecessarily cruel. Even though I saw it coming — I even suspected something as much with the opening narration — it really should have gone in a different direction. With how different it already was from Lovecraft’s original story, I don’t see why they couldn’t.

Perhaps Hardwicke was the wrong director for the job, though much of the blame also lay within the script. If you’re a fan of this Lovecraft lore, this is well worth seeing, though I suspect that most will be slightly disappointed.

It’s a low point of the eight episodes, though certainly not a disaster. Both seasons’ Lovecraft adaptations could have been better, but I hope this won’t stop del Toro and others to try again next season — if there actually will be one.

Thank you for reading! What are your thoughts on Dream in the Witch House? Comment down below!