Be More Like Gerry Bertier from ‘Remember the Titans’ 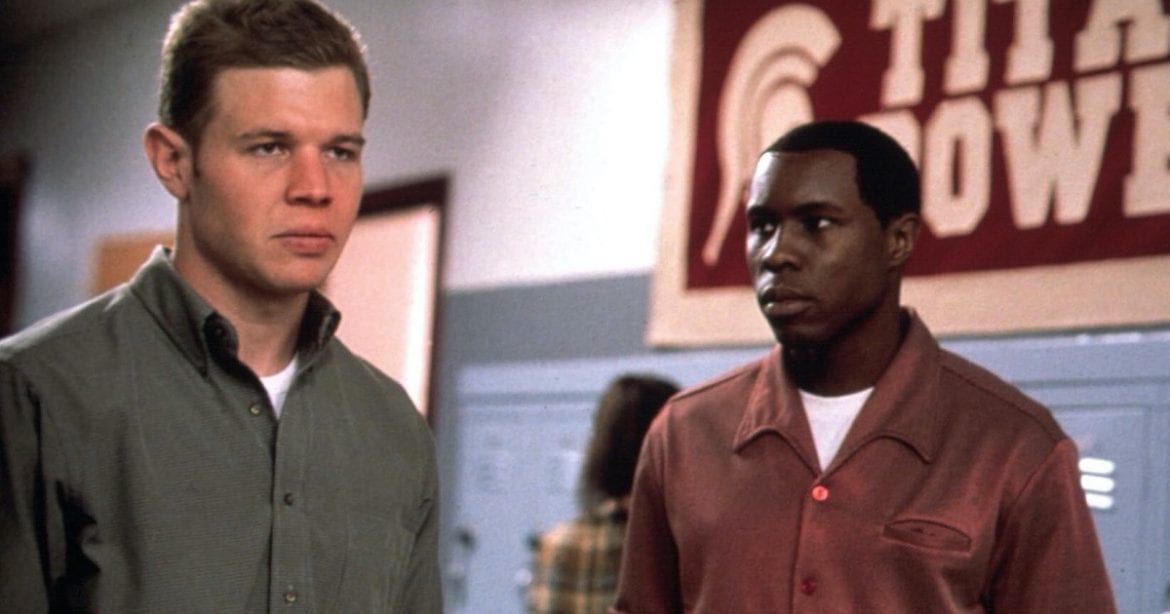 “People say that it can’t work, black and white. Here, we make it work every day. We still have our disagreements, of course, but before we reach for hate, always, always, we remember the Titans.”

In a time when racial hatred and prejudice still paints the politics of our world, it’s vital to go back and remember where we came from and think about how far we have and can go. Remember the Titans came out 20 years ago, but its message is still prevalent today: respect one another and create empathy, regardless of what others look like.

While the whole movie is a lesson in learning to accept others, I want to single out one character in particular: Gerry Bertier (played by Ryan Hurst). Gerry’s journey in Remember the Titans from a deeply prejudiced teen with hatred filling his heart to a loving member and leader of the Titans football team is one that I think many could look to for personal improvement.

When we first meet Gerry, he is at football practice speaking with Coach Yoast (Will Patton) about the upcoming football season. With the two segregated high schools in the district combining into one integrated high school, he is worried about losing his starting position on the defensive line. Of course, that’s a natural worry for a football player to have, but it’s easy to see that Gerry thinks he’s much better than the players in the Black high school and would find it an insult not to start.

Later, we see him storm into Coach Yoast’s office after trying to get involved in the race riots outside of a local store and he says some offensive things about the Black people of the area, right in front of prospective coach Herman Boone (Denzel Washington); instead of apologizing, Gerry stands by his hurtful, racist remarks and stares down Boone.

This is the first stage of Remember the Titans and Gerry’s journey, where we meet him in his hateful and ignorant ways. Gerry hasn’t had much personal experience with Black people, so he disregards them because that’s what everyone else in town does, especially those he interacts with daily.

Gerry is quickly broken down even before he reaches football camp. Before he can get on the bus, Coach Boone publicly humiliates him for trying to assert his dominance over the Black members of the football team and demanding starting positions for the white players.

When he reaches camp, Gerry rooms with who will eventually become his best friend: Julius Campbell (Wood Harris). At first, the two butt heads aggressively, often getting into physical fights and shouting matches. This obviously does not work well, as the two are on the defensive line together and refuse to get along.

It isn’t until Julius and Gerry finally have an actual conversation that Gerry begins to see that Julius is just another high school football player like him. Julius wants to play — just like Gerry — and he wants to win. It’s at this point that Gerry sees that he needs to make some changes within himself and within his friend circle to accept his Black friends.

The most pivotal moment of Remember the Titans happens during a late-night football practice when Gerry finally confronts his racist friend, Ray Budds (Burgess Jenkins). Once Gerry finally calls him out for not doing his job to protect the Black players, he takes the first step to accepting his Black friends. This is the moment when Gerry and Julius become lifelong friends.

After that moment, Gerry is not only accepting of his Black friends, he’s an active ally for them. When Ray lets through a tackle that injures their star quarterback, Jerry ‘Rev’ Harris (Craig Kirkwood), Gerry kicks him off the team. When the team goes through a slump due to tensions, he and Julius step up to lead and remind them that they are all on the same team.

I love that Remember the Titans shows that not everyone in the town ever learned to become anti-racist. When Julius and Gerry are out celebrating after a win, Gerry has to make the difficult decision to leave behind both his best friend, Ray, and his girlfriend, Emma (Kate Bosworth), who refuse to hang out with Gerry if Julius is there. I love this moment because it shows that these changes are painful. It shows that Gerry had to give up a lot just to become a better person. And it truly shows the growth that Gerry has gone through in the film.

Of course, Gerry is not perfect by any means. There are still moments where you can see old habits coming through. He still has his moments with Julius and sometimes he says things that aren’t very kind, but he is making a show of improvement.

One thing I wish Remember the Titans had done more of is show Gerry’s relationship with his mother and his struggle to make her see her own prejudices. When Gerry tries to go play basketball with Julius, his mother stops him. However, only a few weeks later, Julius comes to Gerry’s house to meet his mother.

Obviously, Gerry worked hard to convince his mother of what he had learned. I would have loved to have seen more of that struggle. However, this is the struggle of a film with numerous main characters.

“People say that it can’t work, black and white. Here, we make it work every day. We still have our disagreements, of course, but before we reach for hate, always, always, we remember the Titans.”

I use the quote again because I really want it to sink in. Nowhere does it say that things were perfect after the Titans perfect season. Quite the opposite actually: Sheryl Yoast (Hayden Panettiere) remarks, “We still have our disagreements.” Yet, the Titans remember that everyone has disagreements. What is important is looking past those and the hatred attached to it and seeing the good in people.

It’s a cliché at this point, but I think rewatching Remember the Titans during these “trying times” (read that in the most sarcastic voice possible because I’m so sick of hearing it) could benefit everyone. Be like Gerry. Look within yourself and find those flaws and prejudices. Change them. Work on improving yourself.

Thank you for reading! What are your thoughts on Remember the Titans? Comment down below!