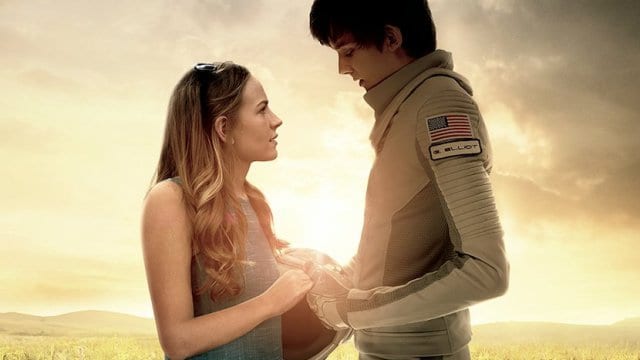 Like Rings, the other wide release that hit theaters this past weekend, The Space Between Us is another movie that was pushed back from a previous release date.  Apprehensive, I walked into the theater hoping for the best and that I wouldn’t hate myself for seeing this movie.  The follow review will be spoiler free.

The Space Between Us is directed by Peter Chelsom and stars Asa Butterfield, Gary Oldman, and Britt Robertson.

We follow Gardner (Butterfield) who is born on Mars due to an unexpected pregnancy from his mother that NASA learns about when she is already in space.  Unfortunately for her, the birth of Gardner ultimately kills her in labor, leaving Gardner to grow up without his mother.  As Gardner grows up in the NASA colony on Mars, he forms an online friendship of sorts with a girl named Tulsa (Robertson).  However, when Gardner preps to return to Earth, he learns that his organs cannot handle the Earth’s atmosphere.  This diagnosis leads him to race against the clock to learn about his past with Tulsa by his side. Unlike Rings which was delayed numerous times due to problems in production, The Space Between Us had a much more excusable reason for moving from its initial December 16th release date.  There was a little indie film released that same weekend entitled Rogue One: A Star Wars Story that The Space Between Us would’ve had to go up against if it had stayed with that release date.  I’d say it was smart of STX Entertainment to avoid getting drubbed at the box office and jettisoning to early February where it would be much easier for the film to make a profit.

However, does this change in the release date solves all the problems for the film?  I’d say no.  One of the screenwriters on the project, Allan Loeb, was the man who penned the script for Collateral Beauty which was universally panned by critics (including me).  Collateral Beauty was such an inherently flawed movie that it most certainly had to come from the writing.  The Space Between Us looked to mirror Collateral Beauty from the promotional material released to the public, attempting to win the audience over with a super cheesy movie that clearly fishes for tears, making me very, very nervous. Unfortunately, I came to learn that my predictions for The Space Between Us were true.

The Space Between Us isn’t all bad, but it’s difficult to get past its issues in the setup of the first act.  As Gardner continues to talk to Tulsa online, I wondered, how was this all possible?  Certainly astronauts have the ability to contact Earth.  But, the film establishes that Carla Gugino’s character is suppose to look after Gardner on Mars.  In doing so, she makes sure that he doesn’t get in trouble or contact Earth.  With intelligent people inhabiting the Mars Colony, how was Gardner allowed to contact his love interest without people seeing his activity on a server and shutting it down right away?  It just seems like a contrived way to kickstart a plot that is entirely forced and wreaks of something very “Hollywoodized”.

The film stays somewhat watchable through most of the performances from a very good cast as well as solid cinematography.  Asa Butterfield is perfect as a sickly boy.  Just from his awkward mannerisms and look, you get the feel that he’s really struggling with the Earth’s atmosphere and confused by all the little cultural aspects of the planet as well.  Gary Oldman, although stranded with limited to do in the movie, gives a typical steady performance along with other seasoned pro actors such as Carla Gugino and B.D. Wong.  The actors in combination with lush scenery make for nicely staged scenes that are topically pretty.

However, this slight promise to the movie is drowned in completely over-the-top schmaltz and obvious tear-jerking material.  The Space Between Us uses an overabundance of genre cliches that ruin any possibility of gaining genuine enjoyment.  To illustrate, Gardner has a little quirk in the movie where he asks people throughout the run time of the film what their favorite thing about Earth is and why.  Upon asking this to Tulsa, she responds with an eye-rolling, “you are, Gardner.”  That is just one of many tiresome, overly romanticized moments in the film that hardly ever feel sweet but simply staged and set up for a big cry from the audience.  Sorry The Space Between Us, but my eyes are dry.

That leads me to my next, and possibly most damning, remark against the film.  The romance between Asa Butterfield and Britt Robertson is not very believable whatsoever.  Sure they act well off each other, they’re both solid actors that already have a lot of experience in Hollywood already in their young careers.  But within a couple days of Gardner coming to Earth, the two teens fall deeply in love with each other and automatically want to spend their lives together for the rest of eternity.  A film that rests completely on the romance between the two leads needed to give it more time to breath so that it seemed somewhat realistic.

I wouldn’t blame the actors for this issue as it seems like more of a script problem. But, that notion does validate my reservations leading up to seeing the film.

The Space Between Us is a movie that goes for charm but will end up receiving groans from the audience.  It receives a D+.  Pre-teens who are susceptible to sentimentality may enjoy the film.  However, all other need not apply. Thanks for reading!  Have you seen The Space Between Us?  Comment down below with your thoughts!

I”m glad to see that this movie is just as bad as I expected it to be. Good review.