With the growth of social media in recent years, Hollywood has followed a similar trend by adapting many forms of connectivity into movies.  Many of those concepts have turned into horror films, with Friend Request becoming another addition to the list.  After getting released in Germany last year, people in the states now have opportunity to see the film.  The following review will be spoiler free. 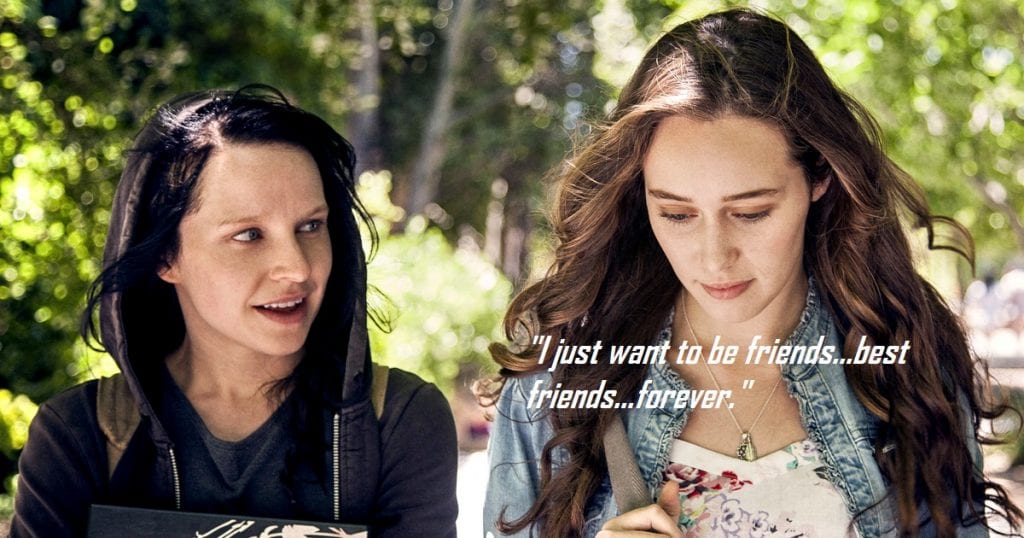 Laura (Debnam-Carey) is a popular girl in college who has a lot of friends on Facebook.  One day, Marina, a girl that is supposedly new to town, latches onto Laura after she accepts her friend request on Facebook.  Laura defriends her, leading Marina to commit suicide.  Soon after, Marina’s suicide photo is posted to Laura’s timeline.  To make matters worse, all of Laura’s friends begin to die off one by one.  Somehow, the videos of their deaths also end up on Laura’s timeline, causing her question if Marina is somehow behind all of it.

If you were having trouble differentiating between the multitude of social media themed horror films, you’re not alone.

Last year, Friend Request was released in Germany with the title Unfriend.  Obviously, this title would confuse some audiences with the 2014 film Unfriended, a horror film built around Skype.  So, the title was changed for the film’s international release.  However, the confusion gets even worse as Unfriended was titled Unknown User in Germany while Friend Request‘s original title during production was Unknown Error.

As if it didn’t get any more difficult juggling all these films, studios certainly aren’t helping us to make any sense of it all.

The film itself has been sitting on the shelf for quite some time as it looked for a distributor to facilitate an international release.  In fact, Friend Request actually finished filming back in March of 2014 and has been waiting ever since.  Typically, this isn’t the best sign for the quality of the film.

In Contention for One of the Worst Premises of the Year

Friend Request doesn’t do itself any favors for having such an eye-rolling premise.  The title of the film alone will keep people from seeing it, but the plot of the film is groan-inducing at best.

If you can actually believe it, there are elements of Friend Request that are fairly competent.  Some of the acting is believable (mostly from Alycia Debnam-Carey in the lead role) and there’s even a storyline that makes some amount of sense.  However, despite its glimmers of competency, Friend Request is still hampered by that awful premise.

The movie may have worked if it took a more sarcastic, heightened look at the topic or if its events were fueled by a cruel main character that deserves her comeuppance, but neither case is the reality.  Instead, Friend Request is horribly self-serious.  In fact, the main character, Laura, doesn’t even deserve to be haunted.  She acts as any reasonable person would in her situation and is by all accounts a genuinely nice person.  Within the first fifteen minutes, all sense of motivation is disregarded. 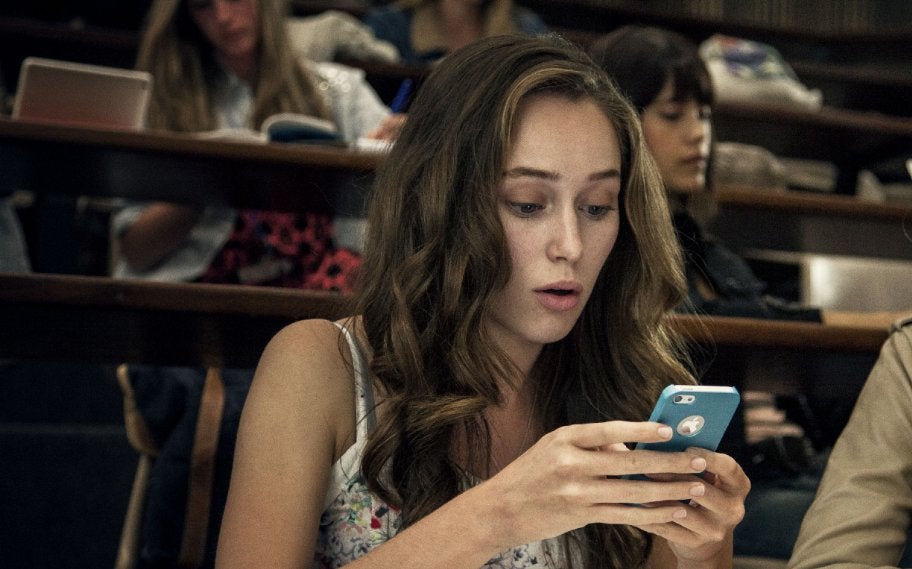 Doesn’t Take Advantage of its R-rating

Despite its R-rating, Friend Request is bizarrely tame in its execution.  It’s horror sequences play out like a PG-13 film, even making a point of cutting away from potentially gory images.  If not for a few spatters of blood on the screen, Friend Request would be less visually scary than Inside Out.  The only thing to remind you that this film is rated R is the occasional F-bomb by a secondary character.

Friend Request will struggle to find an audience during its lifetime.  It’s not scary enough for extreme horror fans to enjoy from purely a visual experience.  And for those looking for a good story, well, you already know how that’ll work out.

More of the Same from Subpar Horror

As you would expect, Friend Request is filled with the same cliches that any substandard horror film has.  None of its horror sequences have any tension, they merely drown out the music so that each jump scare has some type of impact.  Some sequences even play out like a comedy skit as our “characters” become possessed by an evil entity.

Friend Request even has the audacity to attempt to create a backstory for the scares that is as ludicrous as you might guess.  Although the movie is only about 90 minutes, it has to stretch its premise to the max so that it can be considered a feature-length film.  As a result, there’s countless horror fake-outs that drag on for several minutes that are incredibly cheap and tasteless.

Like other low-budget horror films that are meant to make a quick buck, Friend Request hoped to drag people to the theaters with its premise and make its budget back in its opening weekend.  Let’s hope this trend begins to wane.

Friend Request is better than it should be, but that still isn’t saying much.  Filled with the same cliches that plague most horror films, the film is just a bore.  This inherently flawed movie has fake characters that are killed for all the wrong reasons.

However, Friend Request could have been a serviceable film if it had set up a few genuinely creepy sequences.  Instead, the film refuses to utilize its R-rating to its advantage, leaving you without a lasting image to take with you as you leave the theater.  It gets a D.

This film is neither scary enough for horror fans nor sarcastic enough to be enjoyed as an ironic exaggeration of the influence of social media.  Friend Request will be forgotten in a matter of weeks.

Thanks for reading!  What are your thoughts on Friend Request?  Comment down below!

It’s sad when I hear about this from an overseas film critic since they saw it in the previous year or so (Mathew Buck a.k.a. Film Brain in this case for me), but I just don’t get how anyone could have looked at this film before it went into any theater and said “Oh yeah, this works!” Film Brain even ranks this as one of the worst “2016” films that he saw that year. You can see his “Projector” review on that film and even see his “Best & Worst of 2016” video for more detail on that perplexing chestnut.

Yeah I don’t know how someone thought it was a good idea??

Ho-ly cow! I believe I saw promotional events for this movie on a writing site (they periodically do this with movies and shows—have fanfiction contests for them). The fact that this movie is so poor just reinforces the quality issues with the site itself. While people can definitely make lemons out of lemonade, you should give them better base material to work from and for in the first place, instead of having them help promote a subpar film.

This movie caught my eye because of a story I read that was based on a similar film—perhaps the other one you mentioned—so I was thinking it might turn out to be fairly interesting. Guess not.

By the way, I cracked up when I clicked that highlighted line about “incredibly cheap and tasteless” and it linked me to the Transformers “Knight” movie. Youch!

Lol it’s fun to play games with my hyperlinks. There’s always some fun joke thrown in there!