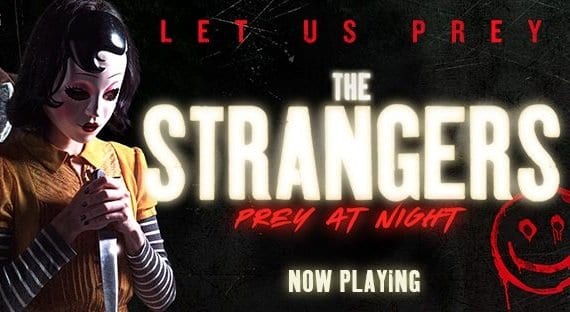 Roger Ebert once said, “no movie executive has never been fired for greenlighting a sequel.”  That quote could not be more true in 2018 with sequels coming to theaters almost every week — including this week.  Ten years after the original The Strangers released in theaters, the faceless killers with creepy masks are back once again in The Strangers: Prey at Night.  The following review will be spoiler free. 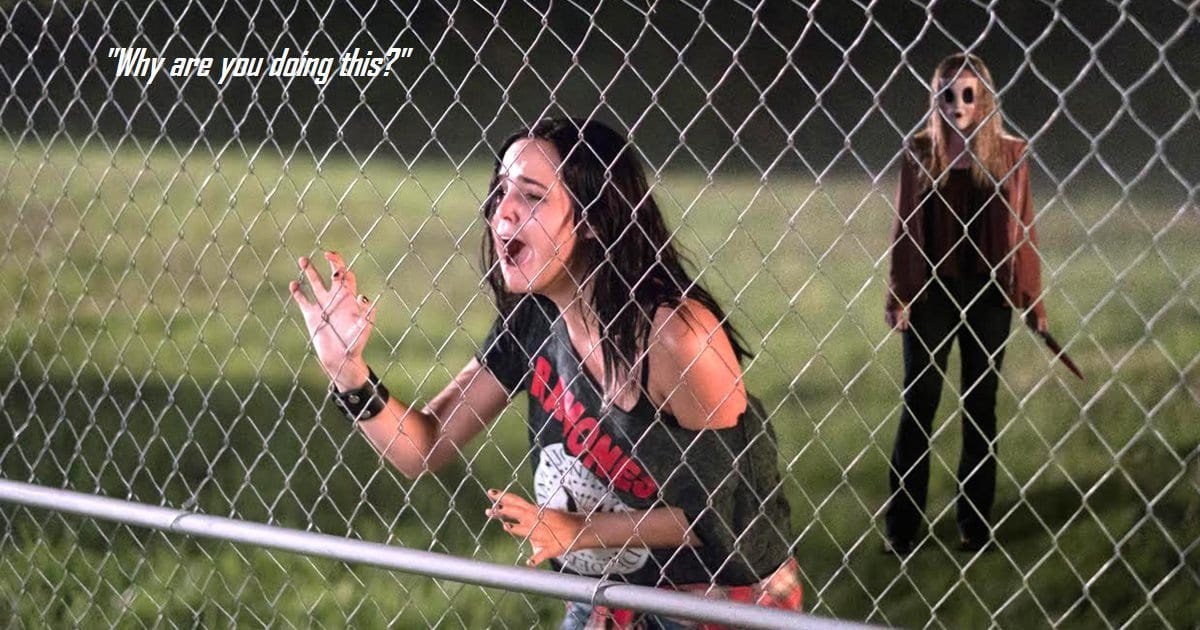 Kinsey’s (Madison) parents have enrolled her in a new boarding school in fear that she needs more structure in her life in order to succeed.  To help make the move as easy as possible, the rest of family goes on a road trip with Kinsey to aid in move-in day.

The trip is quite long, forcing the family to take a break for the night at a trailer park where their relatives currently live.  However, upon their arrival, they quickly begin to notice strange occurrences in the area — which culminates in a group of masked strangers hunting them down for unknown reasons.

It was a long road to get a sequel to the 2008 sleeper hit The Strangers.  The first film was solid success, earning over $82 million on a mere $9 million budget.  It seemed fairly obvious that greenlighting a sequel to the film should have occurred as quickly as possible, but that clearly wasn’t the case.

A sequel reportedly entered production later in 2008 (tentatively named The Strangers: Part II).  However, Relativity Media (the owner of the rights to the project at the time) pulled the film from its release schedule, claiming that the film was not in their best interest despite the fact that Universal Studios wished to distribute the film for them.

It became clear later on that the problem was purely financial, evident by Relativity Media’s descent into bankruptcy back in 2015.  The Strangers 2 was officially in limbo without a clear way to proceed.

Luckily, Aviron Pictures stepped in to aid the project, slating it for its current release date.  Finally — over a decade after the original — The Strangers: Prey at Night can capitalize on its small budget ($5 million) and earn some dough at the box office.

From a Technical Perspective, The Strangers: Prey at Night isn’t the Worst Thing Ever

On occasion, The Strangers: Prey at Night really works as a low-budget slasher flick.  This belated sequel does succumb to the usual tropes (more on that in a second) but it still shows signs of solid craftsmanship.

Director Johannes Roberts uses some clever lighting and framing devices to create a creepy sense of atmosphere.  Interesting lighting hides the faces of the masked killers — adding to the idea that these “strangers” randomly chose to prey on this family.  In that sense, the strangers transcend being merely masked murderers and become a force of evil and impending doom.  Masked figures that brutally murder their victims are always a frightening image, but deepening that fear with an element of psychology will always be scarier.

With a runtime of 85 minutes, The Strangers: Prey at Night doesn’t have a lot of fat weighing it down.  It gets to the point, getting to what you all came to the theater to see.  There’s something intrinsically satisfying about a film that knows what it is — a low-budget horror movie meant for individuals to watch late at night when they want some cheap horror thrills.

Look at it this way: the movie is over long before you can grow to truly hate it!

There’s a common misconception that claiming that a film that contains “cheap horror thrills” means that it has carte blanche to do whatever it wants with its characters and story.  After all, it’s just trying to find excuses to show off its blood effects!

That reasoning is precisely why strong characters are necessary (or at the very least characters that are interesting and layered).  Strong characters make the tension tighter, add more emotion to the kills, and increase overall enjoyment.  Otherwise, they turn into cannon fodder for the evil entities in the film.  You know a movie is in trouble when you’re rooting for the masked murderers to slaughter every “character” in the movie — and that’s precisely the problem that The Strangers: Prey at Night runs into time and time again.

Not once will you empathize with the characters, most notably Bailee Madison’s character who is an unlikable drama queen that never shows a redeemable quality.  The rest of the characters, well, they’re basically nonexistent — taking up camera space without adding anything noteworthy.

As The Strangers: Prey at Night succumbs to trope after trope, these characters only become more irritating.  A critic can only take so much falling while running, panting loud enough for the murderers to hear, and entering clearly dangerous and spooky locations because the plot calls for it.

There’s no denying that 80’s nostalgia has seeped its way into new films.  Hell, Spielberg’s Ready Player One looks like it’s all nostalgia.  However, for nostalgia to work in movies, it has to have a point.  The strangers in The Strangers: Prey at Night love electro music from the era…because the script says so.

The film is a clear homage to classic slasher movies of the time, but there’s no discernible reason for the homage within the world of the story.  It’s jarring to say the least, coming off as a cheap marketing tactic to create a fake aesthetic to the film that is never consistent.  The Strangers: Prey at Night doesn’t have a style of its own, but it really wants you to think that it does.

Filled with frustratingly stupid, clumsy, and loud characters, this slasher flick indulges itself almost every step of the way — ending with a tease that acts like a giant middle finger to the audience. 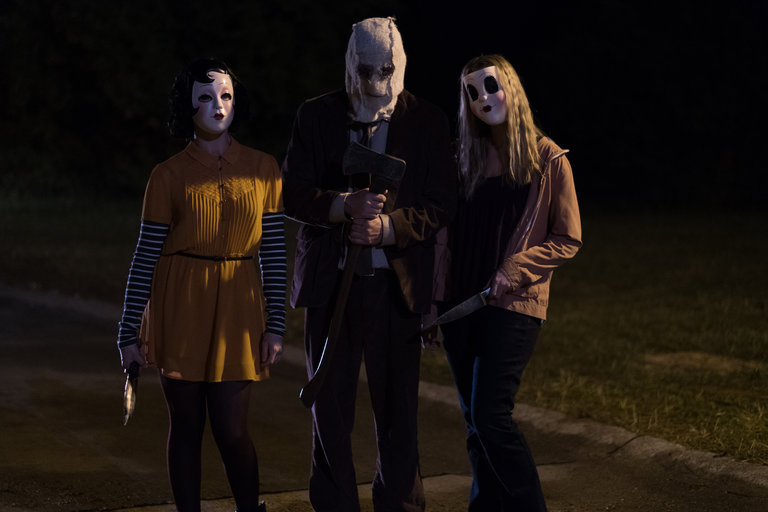 Thanks for reading!  What are your thoughts on The Strangers: Prey at Night?  Comment down below!

I enjoyed this movie, its not great but should appeal to a majority of 80’s slasher fans. The one place where I absolutely disagree with this reviewer is the characters. I thought they were more likeable than most horror protaganists and it actually made me sad to see them terrorized.

What’s funny is that I absolutely hated the original and loved this one. It could simply be the blatant homage to John Carpenter and his “Stalker Cam” angles and framing. That 80’s vibe filled with Stalker Revenge worked for me. It also was in a theater filled with people that wanted to yell at the screen which made for an entertaining time as well.

Hey I’m jealous that you loved it! I wish I found enjoyment in it!

I’m a sucker for when the victims get to fight back. That always pumps me up. That entire pool scene was shot awesomely between the lighting, music, shots. Regardless of if the 80s nostalgia was needed, I think that it helped create an identity of the movie. Yes I would have loved to get rid of the horror tropes. It did have the flaws of the first one where you have good guys with guns but they were still allowed to be tortured by a couple randoms with knives.

A great review of Strangers 2 – the original is extremely entertaining.

It really is! It’s one of those great horror films from that time that you sometimes forget about

You were being kind giving it a D+ rating. ?

Lol well you could always wait for streaming and look for something else in the meantime!

Thanks for the review, was debating on whether to watch it after seeing the original, but it appears it has nothing new to add.