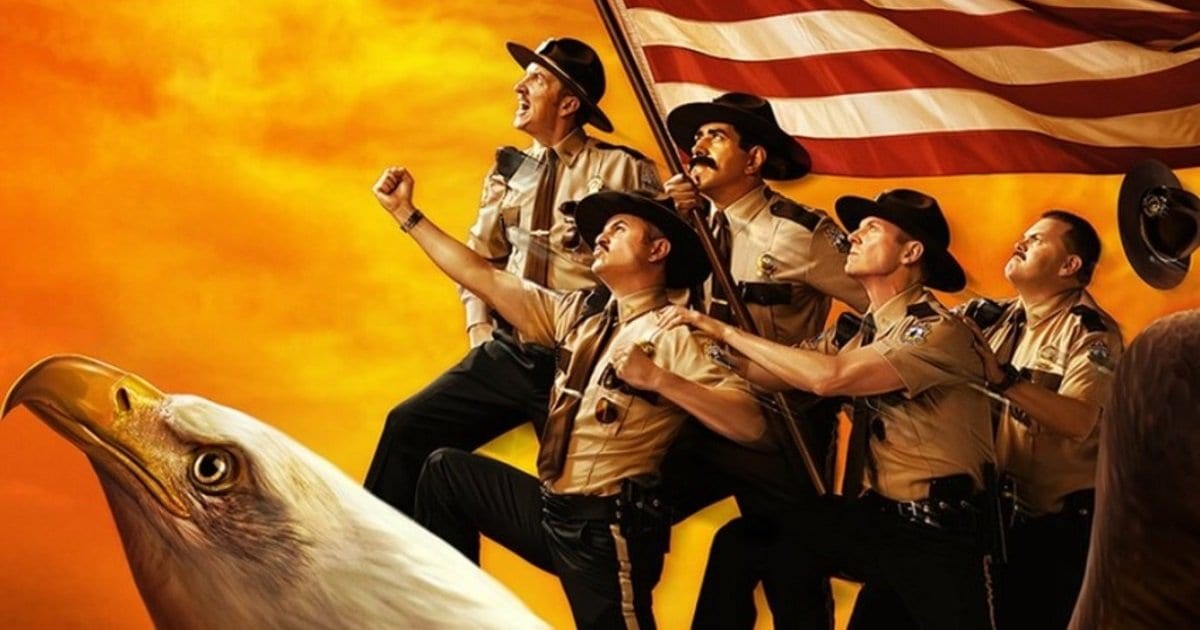 Sometimes, it takes a village to get a movie made.  In a time where studios are becoming more and more squeamish of handing out millions of dollars to niche projects, some creative minds are forced to turn to other means to find funding.  In the case of Super Troopers 2, the comedy group known as Broken Lizard resorted to crowdfunding, and they finally got their movie made sixteen years after the original film hit theaters.

After losing their jobs for prior infractions, Thorny (Chandrasekhar), Farva (Heffernan), Mac (Lemme), Jeff (Soter), and Rabbit (Stolhanske) are down on their luck as they adapt to life outside of the police force.

Thankfully, the group is thrust back into action upon learning of a Canadian town that is actually on American soil.  Now that they’re back on the force, they must work to phase out the local Canadian police force as the town as a whole adapts to American life.  However, as the troopers start to encounter large amounts of drugs all over the town, it’s clear that their job won’t be very easy.

Super Troopers 2 has been in development hell for quite some time.  Word initially came about at Comic-Con in 2006 that a sequel to 2002’s Super Troopers was in the works.  While the script changed many times over the years, one thing has always stayed consistent: Broken Lizard wasn’t able to find funding.

Finally, on March 24th, 2015, Broken Lizard announced that they had received studio permission to film the sequel, but with one catch: they had to come up with production funding themselves.  Almost immediately, the group created an Indiegogo campaign with a goal of $2 million in contributions.  The comedy group noted that they didn’t want financial backers to feel ripped off for contributing to the cause, so they put an emphasis on the rewards, partnering with Fandango to make sure those that donated would have tickets to the movie.

On top of that, they included the following perks for different amounts of financial backing (among many, many others):

Each tier included many, many prizes, and the comedy group hit its goal within just 26 hours.  They finished with approximately $4.7 million overall, forcing Fox Searchlight to schedule the release of the film.

Every Actor is Having a Ball Being Silly

Broken Lizard is never one to stray from a good ol’ joke.  With a name like Broken Lizard, you know they clearly like to keep things light.

The comedy group stuck to what they know best for Super Troopers 2, doubling down on silliness for a second film that should please most that were fans of the original.

Though they’ve visibly aged, the five main cast members still love to act like children, and that youthful spirit led to some wonderful gags over the course of this film.  The entire movie evokes a similar care-free attitude that the first Super Troopers brought to the table, allowing the actors to enjoy themselves as they perform in roles that are unabashedly silly.  Whether it’s the five troopers or a comedic star in a cameo role, every actor is having a blast doing whatever comes to mind.

Everyone has their moments, but Rob Lowe comes away from the film as a clear winner from his part as Guy Le Franc, an all-time great hockey player in the minor leagues with the nickname, “The Halifax Explosion.”  While the movie as a whole is a bit of a slave to the generic Canadian mockery that occurs in many lowbrow comedies, Lowe elevates these clichés with a bizarre character that consistently finds new ways to become very, very funny.

You Know Exactly What You’re Getting Into

This group of comedians know exactly what they’re good at, and they stick to that shtick, milking it dry within its premise.

Broken Lizard has an interesting dynamic in that all five members immerse themselves in the creative process of the film, meaning that they have a lot of man power to think of intricate, elongated comedic bits that include much creativity.  Their work is surprisingly synergistic as these bits remained streamlined and consistent.

However, there’s also a clear amount of improvisation to many moments in the film which gives the impression that the group merely walks on set and thinks of things on the fly.  Because of this dichotomy, Super Troopers 2 has the sensation that literally anything can happen — and the film itself makes good on that idea by moving from one bonkers moment to another.  The plot itself is quite a retread, but there’s clearly a ton of creativity in the humor, and that’s all that some will need from a Super Troopers movie.

As a product of a crowdfunding platform, Super Troopers 2 is made by the fans and for the fans of the first movie.  Broken Lizard understands that notion, and they play into it every chance they get by paying homage to what made the first film such a cult hit.  But, they might have gone a few steps too far as the plot of the film nestles a little too closely to the plot of the first film.  To those that aren’t already in love with these cops, this film is merely an updated version of the first film, and it won’t offer much entertainment.

Super Troopers 2 has more drugs, more antics, and more rival cops…but in Canada.  There’s a lot of fun banter between Americans and Canadians, but there isn’t enough done in any respect to call Super Troopers 2 a “must-see” in any regard.  Super Troopers 2 is adequate entertainment, but “adequate” isn’t exactly the most ringing endorsement.

Super Troopers 2 offers exactly what’s advertise: fully-grown adults acting immaturely.  And while the results are certainly uneven, the Broken Lizard crew definitely still has tricks up their sleeves, and it’s still fun to watch them do their thing.

The plot is essentially the same as the original Super Troopers, so one’s enjoyment of the film is entirely subjective as the comedy takes center stage.  If you’re not in from the beginning, Super Troopers 2 will turn sour very quickly.  If the opposite is true, then this delayed sequel will be a delight.

Thanks for reading! What are your thoughts on Super Troopers 2? Comment down below!