After the surprise $1.5 billion outing of Jurassic World, Universal’s decision to continue on making more installments in the franchise is no shock to anyone. However, many would still call this decision into question, considering there is not much else one could do creatively with the franchise. Unfortunately, Jurassic World:Fallen Kingdom does nothing to sway the apprehensive in the opposite direction. Unlike its predecessor, it wastes any gas the franchise had left in the tank.

Claire Dearing (Bryce Howard) must venture back to the island called Isla Nublar in which she worked to save the remaining dinosaurs. She can’t do it alone though, as her ex-boyfriend, ex-dinosaur trainer, Owen Grady (Pratt) becomes a necessary asset to the mission. To add to the fuel, the island has an active volcano waiting to erupt at any minute.

The stakes of their expedition rise even higher as new information comes to light — which puts the balance of nature into question.

It’d be inaccurate to say that studio executives haven’t noticed there’s a profit to be made off of people’s nostalgia. Although some resurgences haven’t had the warmest reception in recent times, audiences ran to the theatres to see Jurassic World. The film truly surprised me as a cinephile. I didn’t expect to love it as much as I did. I understood it was a blockbuster, yet its execution felt truer in spirit than the direct two sequels to the original did. It understood which idea made the 1993 classic a joy even to the most casual of viewers.

Then the news of another one going into production made the news. This was an immediate red flag for me. I pictured history repeating itself once again. What else could you do that would feel both new and true to the original Jurassic Park?

Well, the waiting is over, so that conversation is moot. The film is here, and it is time to view it for what it is.

Hope in the Amber

As a blockbuster, I yet again didn’t expect the next Godfather from the latest installment in the Jurassic franchise. If there’s a takeaway from this it’s that the very first act somehow managed to continue the story quite nicely. The entire sequence on the island makes for some massive scale shots, and the movie even garnered another believable excuse to make the audience sit down and relax after a long week of work. The Isla Nublar segment is what a lot of casual folks will come for, and for good reason. I had so much fun with it myself. It helps that the CGI looked incredible.

I’d argue there are some emotionally heart-tugging scenes in the film as well. J. A. Bayona’s storytelling tactics, which he brought on from films like The Impossible, truly let the viewer take in the tragedy of certain situations. A select few dinosaurs become the heart of the film; you start to feel more connected with them than the human characters at a point. Sadly, there’s a downside to this effect.

So much time went into developing the creatures that there is little to any care for the humans. The intimate relationship between Owen and Claire continues, only with less back and forth which made the two click together in Jurassic World. Claire’s helpers are just more forgettable faces you’ll end up not caring about. Franklin (Justice Smith) is your typical smart geek who cries for his life while Zia Rodriguez (Daniella Pineda) is yet another feisty doctor. I said no spoilers, but I may have given away everything there is to know about the two.

The villains are, once again, stereotypical, but they’re even more cartoonish in a way the first Jurassic World couldn’t even replicate. In the middle of all things, there’s Maisie Lockwood, a child character who might be the laziest addition to the story. The plot manipulates the girl’s emotions to its needs instead of trying to form any sense of subtlety. She also led to the movie’s version of “jumping the shark”.

I must mention the monsters we all came to see. Yes, I praised some of their involvements, but it makes it that much more sad to see them get undermined. They become a gag — an exploitation to make scenes funny while bringing their ferocity down.

The ones who don’t know their history are doomed to repeat it. Funny, how the theme of the film is also the reason why it fails as a sequel. The second and third acts struggle to justify the purpose of the movie’s existence just as The Lost World and Jurassic Park III did years ago. In truth, they begin to walk away from the true soul of the original. If you can think of the most paint by numbers ending, this one will probably be it. It only goes downhill from here.

The plot is unstable. Many introduced story elements are forgotten, sidelined or contradicted. Too many times did I find myself questioning the integrity of Jurassic World: Fallen Kingdom which, even as a massive blockbuster with large CGI dinosaurs that are featured heavily in the plot, still requires that the filmmaker treats the audience with respect.  The action, although satisfying, lacks the mystery that even the previous installment had by itself.

Solo: A Star Wars Story may finally have a competitor for the least necessary movie of the year. Jurassic World: Fallen Kingdom unhallowed the value of the franchise. Despite the enjoyable first act, the audience is dragged along for a ride afterwards, distancing itself away from the heart and soul that could have been injected into this story.

The closer one gets to the film’s ending, the more it deprives itself from the core of the series. Instead, it leaps away, becomes something lesser, something cheap. No cruddy nostalgia can cover-up this one. Although there is a lot of action keeping you awake, it’s not enough. In the end, it’s a truly forgettable flick that loses any form of identity. 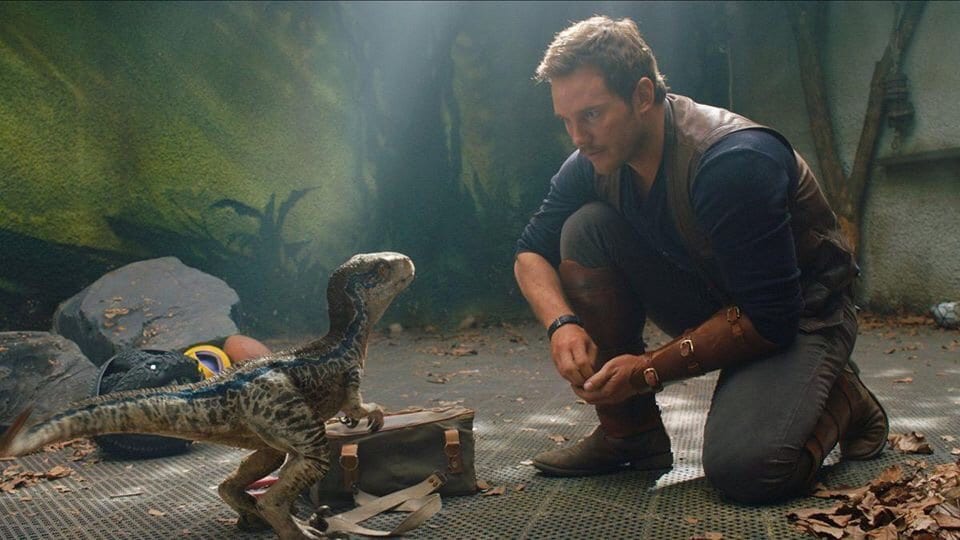 Thanks for reading! What are your thoughts on Jurassic World: Fallen Kingdom? Comment down below!

I watched a YouTuber review and he said 1st half Bayona and 2nd half predictable/more to fit with franchise…I kinda agree. You make some good points, although “some emotionally heart-tugging scenes” is a MAJOR understatement… I cried, in a cinema, surrounded by kids….and I wasn’t the only one! (But maybe that is because of nostalgia/SFX…?) I agree it’s not what it could have been, but as a die-hard fan (come on, if you sat through JP3 with Tea Leoni screaming all the time, JWFK doesn’t seem so bad!)…I just can’t give it a D+ a reluctant C maybe…my heart won’t let anything Jurassic go below that.

A very in depth review of Jurassic World Fallen Kingdom. I think another sequel is a given, as it will round off this story arc.

I must admit that I can be bought off with good visuals. Eventually, I will see (and probably own) this movie. You see, it has these dinosaurs…

Whoa, wasn’t expecting that review/grade! I hope I like it as I did enjoy the first.

Oh well, here goes my hope for a good trilogy. Great review though 👍