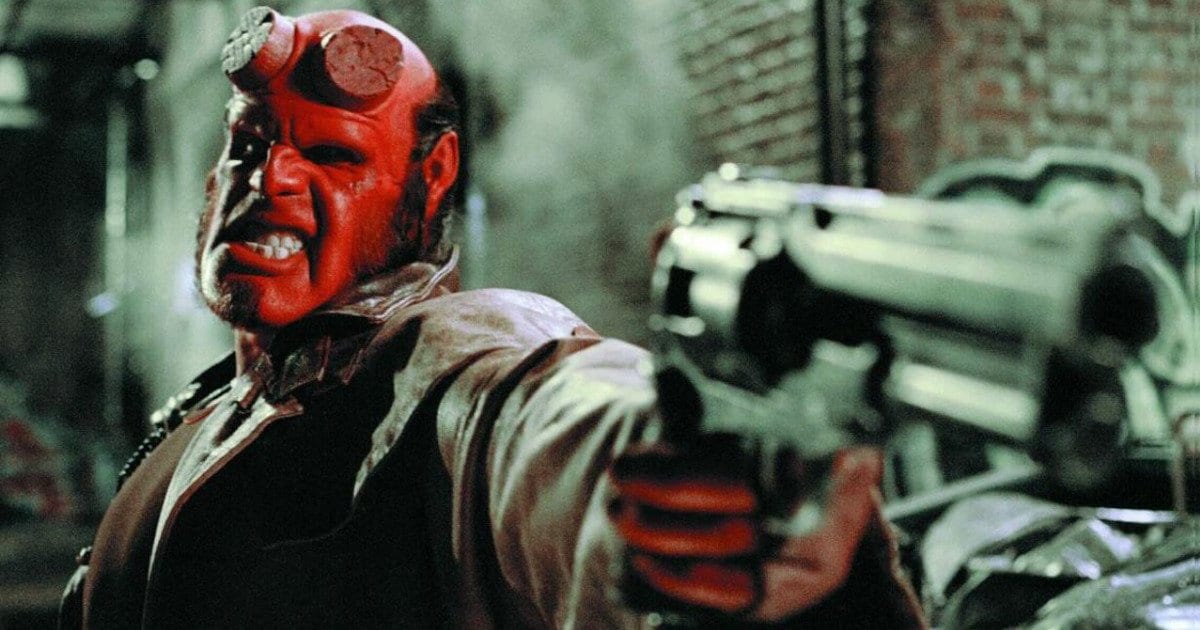 The Hellboy franchise is, in my opinion, one of the most underrated superhero franchises out there. Both Hellboy (2004) and Hellboy II: The Golden Army (2008) are Gothic superhero masterpieces. Both revel in their Lovecraftian roots and are vividly brought to life by director Guillermo Del Toro. July 11th marks ten years since the franchise’s last installment. It’s only appropriate to point out the ten best reasons to celebrate the two films. So, without further ado, here are the top ten reasons to love this great franchise.

In the mid 2000’s, all superhero movies started to blend together. The same origin stories were told against the same backdrops and neither Marvel or DC was really inventive with a character that wasn’t Spider-Man or Batman. However, the first Hellboy film decided to take a different stance on the matter. Sure, there’s still a clichéd save the world plot, but the style and dark intensity of the film sets it apart from its mid 2000’s competitors.

The duo-logy is a superhero series. It is also a set of monster movies. It is also a Gothic Lovecraftian horror series. But first and foremost, it is a Guillermo del Toro passion project, and that makes it stand out. Mid 2000’s superhero movies feel cookie-cutter because they are mostly studio controlled. The exceptions being, you guessed, Sam Raimi’s Spider-Man films (save Spider-Man 3) and Nolan’s Dark Knight Trilogy. But amidst these giants, Guillermo Del Toro was allowed to play in the sandbox with this character and create basically whatever he saw fit.

Do I really need any further evidence for this? A picture is worth 1,000 words and that’s enough to sum this point up. 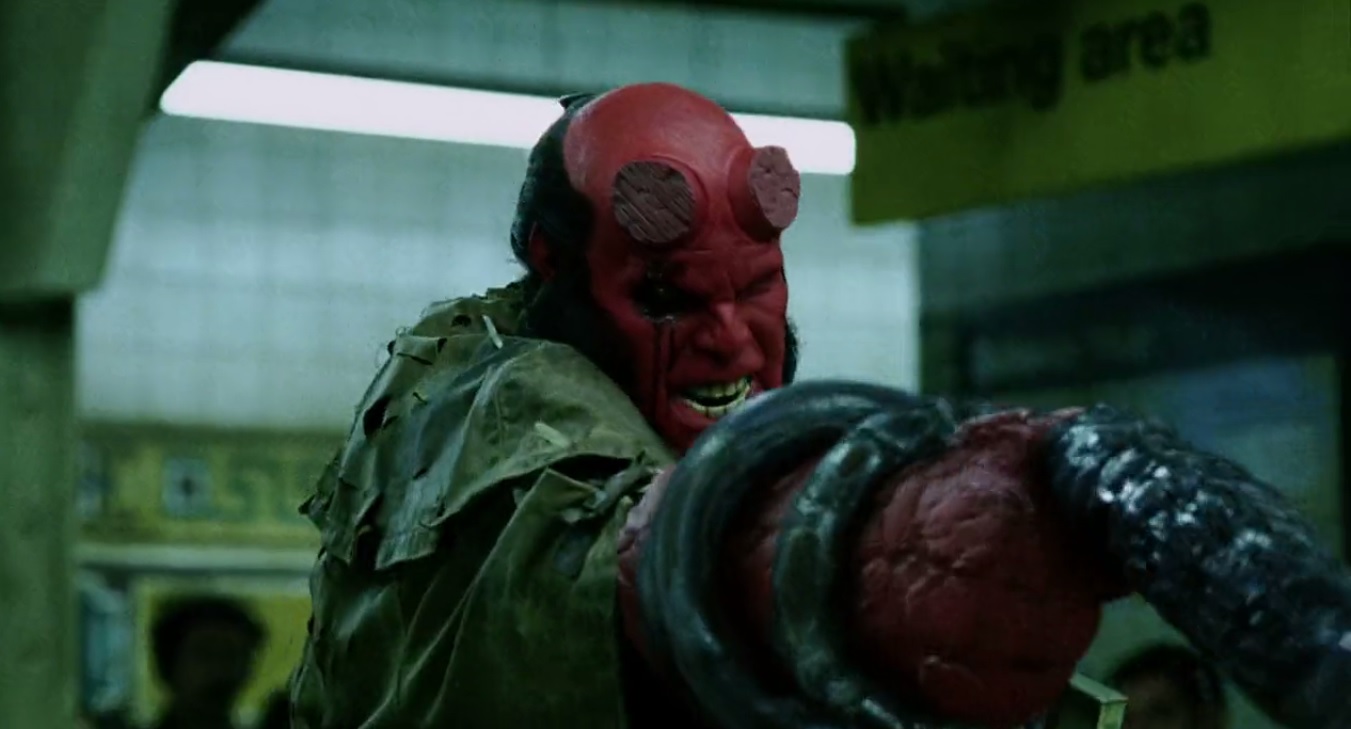 Among the best of Hellboy’s one liners are:

Hellboy: Didn’t even buy me a drink.

[holding his stone hand up to a moving car]

[punches the car into the air]

Guillermo del Toro just gets monsters. He also has a knack for practicality with his monsters. Look no further than his several Academy Awards for last year’s The Shape of Water. As a director, del Toro has a keen sense of how to make something horrible and hideous have a greater level of depth than just the classic beauty and the beast undertones. It is this level of depth that makes Hellboy not only easy to empathize with, but to like and thoroughly enjoy despite his rougher personality traits. 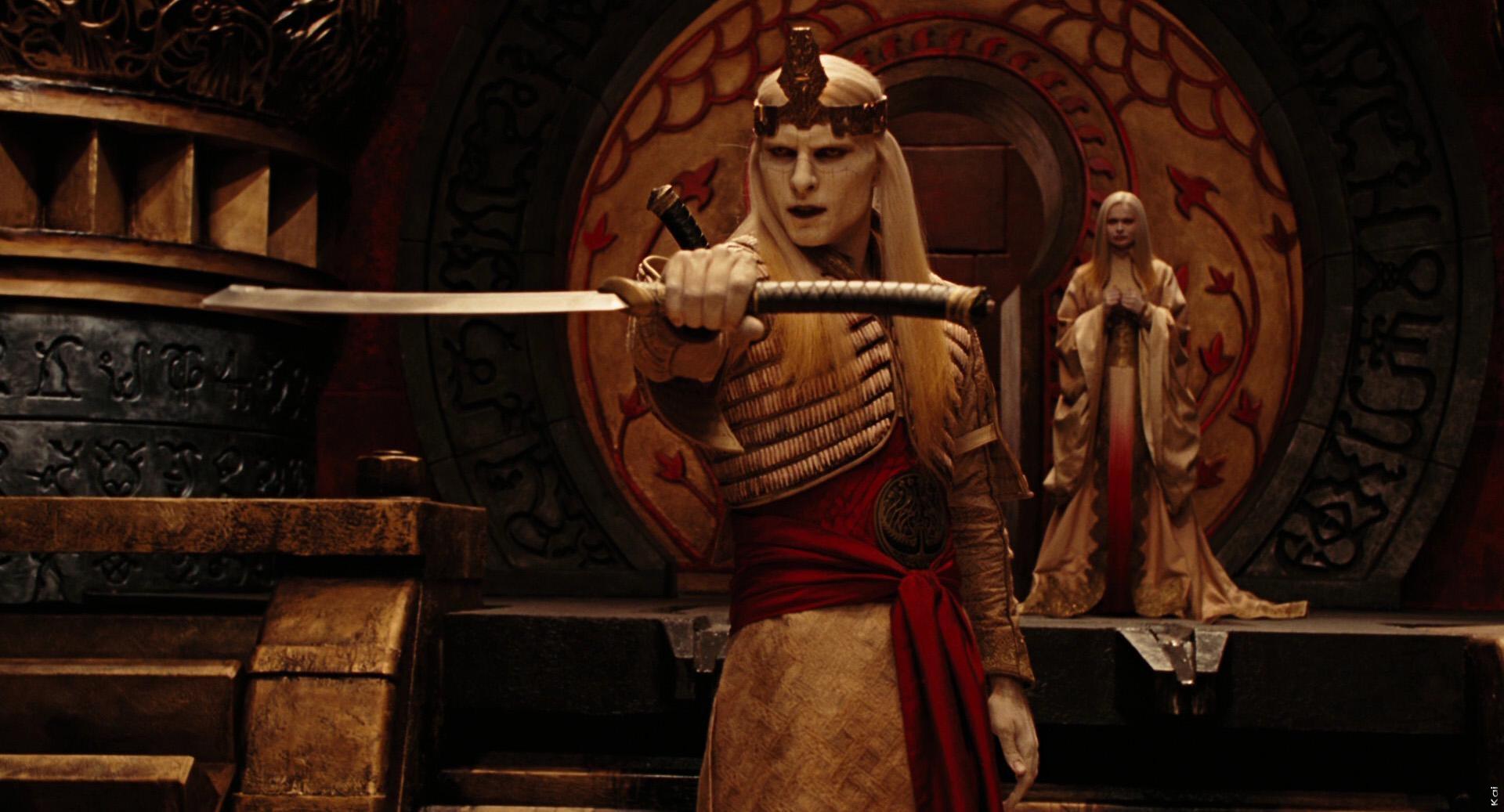 Rasputin, yes the Rasputin, is the villain of the first film in the franchise. He’s dark, he’s dastardly, and he’s mysterious. And, while he has a rather generic plan, his demonic humanity makes the perfect foil for Hellboy’s humanic demonity. (Don’t know if “humanic” and “demonity” are real words, or if they are made up. But, in the word’s of Thor, “All words are made up”, so I’m going to use them.)

Prince Nuada is almost too complex for his time. Superhero movies have always struggled with complex villains, but Prince Nuada comes from a time when complex villains were fewer and farther between. What I love about him as that his intentions aren’t just outwardly evil. He is simply trying to restore the world to a time before humanity ran amuck with it. Humans disregarded the truce with his people, and his people paid the price for it. Prince Nuada is almost like Killmonger in his reasoning, definitely wrong, but not entirely. 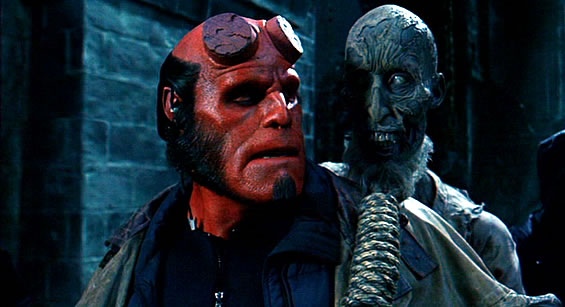 Hellboy is one of the first superhero films to outwardly embrace magic as a storytelling element. Even Marvel didn’t begin to embrace it until 2016’s Doctor Strange. It stands out as a film because it dives right in to the occult background of the series. Hellboy borrows from Catholicism, Lovecraft, Judaism, and various other mystical lores to develop its universe. Hellboy lives in a world where trolls, elves, and tooth fairies exist. I don’t know too many other superheros that would brush with this kind of fantasy on the first go, but Hellboy and Hellboy II revel in it. 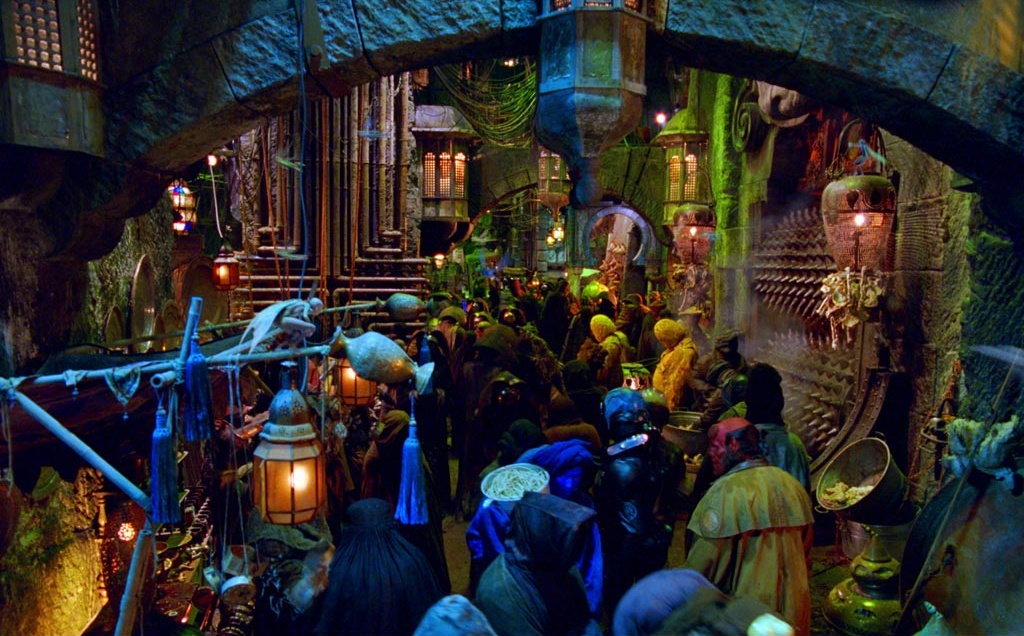 The Hellboy comics are noted particularly for their dark Gothic scenery, brooding character designs, and dark occult themes. The movie franchise embraces this on the same level that Thor: Ragnarok embraces it’s cosmic comic book trippiness (Re: “All words are made up”).

While the characters lose some of that brooding design due to the fact that people aren’t built like two-dimensional demons, the scenery and setting do not. Whether below an ancient graveyard, inside of the Troll Market, or in the halls of the Bureau for Paranormal Research and Defense (B.P.R.D.); The Hellboy duology never loses its sense of style.

Three side characters in particular stand out. They are Abe Sapien, Johann Krauss, and Agent Manning.

Abe is Hellboy’s more intellectual sidekick. Found in a tube on the same day that Abraham Lincoln died, he has been with the B.P.R.D. ever since. He’s the dry and somewhat naive voice of reason to Hellboy’s brash arrogance. Not only does he balance out Hellboy as a character, but he is also given greater depth in the second film. Abe is empathetic, laughable, and intriguing to say the least. 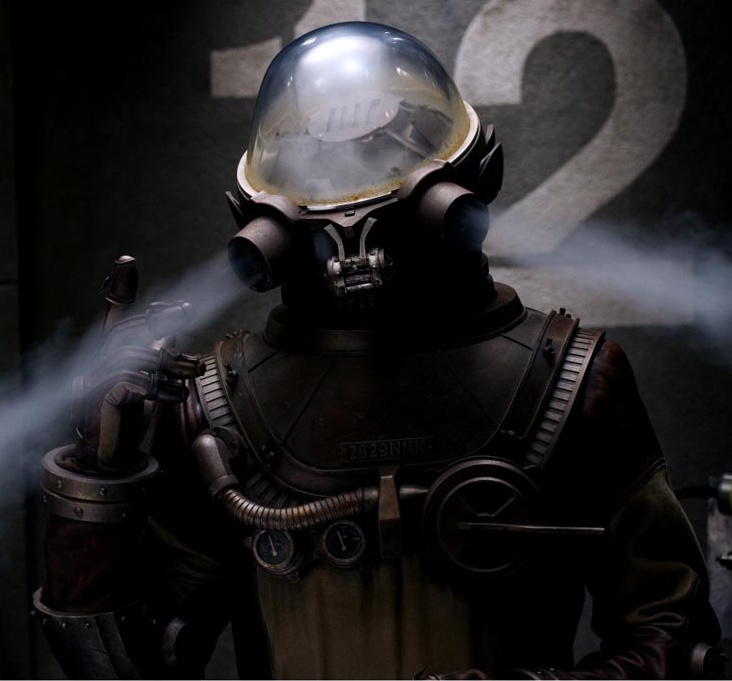 Say what you will about Seth MacFarlane, but he breathes life into the gaseous cloud that is Johann Krauss. Snarky, intellectually minded, and in charge, Johann Krauss not only represents every issue Hellboy has with his “father”, but gives the story of Hellboy II the perfect amount of tension to keep moving forward.

Speaking of the parts of Hellboy’s father that he most dislikes. Tom Manning is the wet blanket over Hellboy and Co. Always stressed, upset, and at odds with the titular character, Tom Manning is often the sole voice of reality in the Hellboy films. He and Hellboy have many fun exchanges throughout that not only act as comic relief, but often push the story further as well.

I haven’t spoken much of Hellboy’s on again-off again girlfriend. However, she deserves more praise than any of Hellboy’s other compatriots, hence why she has her own section. Liz Sherman is cursed with the ability to light herself and her surroundings on fire. A massive plot point in the first film is her struggle to control that power. And while she is used in the first film to lure Hellboy into a trap, she is no damsel.

Liz actually ends up saving Hellboy’s life more than he saves hers. She is portrayed as a heroine equal to the hero in terms of physical ability, and is done so by the talented Selma Blair. Liz is fierce, intense, and one of the best female movie heroines. She stands out because she comes from the mid 2000’s, a time when most women in distress were merely damsels.

Liz Sherman predates Wonder Woman and the Wasp on film by over a decade each, and her character is a major step forward for all female superheros in film.

Perlman was 54 when the first Hellboy came out, yet he plays the role like a man half that age. His physique as the demon-child matches the attitude and aggression with which he plays the character. Not only did he bring the character to life twice, but he also fought alongside Guillermo del Toro for the oft rumored Hellboy III. And, on top of all that, Perlman continued to dress-up as Hellboy and visit terminally ill children even after not having played the character for years.

While I’m sure that David Harbour will do a terrific job in the upcoming reboot of the franchise, it just won’t be the same without Ron Perlman’s deep voice, gruff attitude, and commitment to the character.

Thanks for reading! What are your thoughts on the Hellboy Franchise? Comment down below!

Say what you will [people] about the character of Johann Krauss, but I thought the fight/squabble scene between he and Hellboy was freaking hilarious! ‘Til this day – AND without watching the movie – I still laugh! It’d be nice to see a Hellboy III as Im kind of tired of seeing these other superhero movies although I wouldnt mind seeing the majority of those superheros in Lego drag like Batman`s Lego Movie. Now those are funny!

Without a doubt Hellboy is one of the best and you should have included the two excellent animated films as well because they fit the Hellboy canon.
Liz Sherman is definitely a serious badass….her “You should be running” still sends chills down my spine when she says it. Selma was just amazing in this role.
But the thing I love about Hellboy? He adores cats and meeting him for the first time surrounded by his cats really set the tone for series for me….

Got a lot of love for hellboy, graphic novels and films. Agree with point 10 most. You can keep your DC and marvel! (Apart from guardians and the joker….)

Loved the first film. Golden Army is nowhere near as good. There were also some animated features that were quite fun.