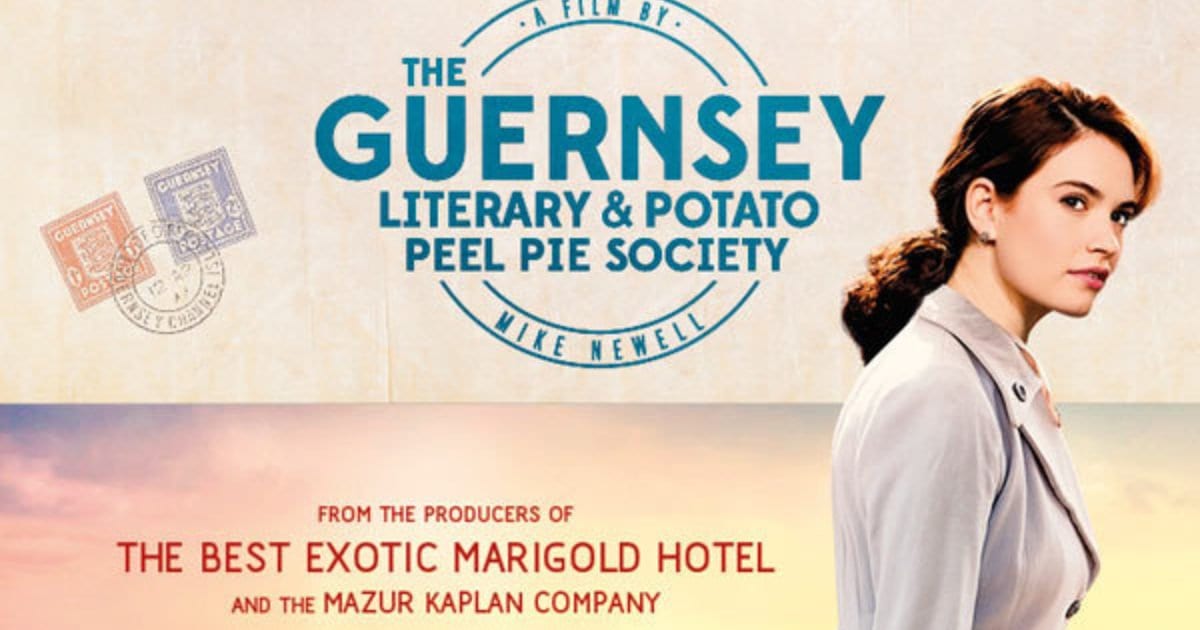 Netflix will have hits and misses in its quest to master the process of providing quality original content.  As Calibre (2018), Sunday’s Illness (2018) and other European offerings demonstrate, Europe will be a well tapped source for Netflix.  The Guernsey Literary and Potato Peel Pie Society (2018) is one that falls into the category of a miss.  Let’s explore why.

The Guernsey Literary and Potato Peel Pie Society is a historical romance/drama based in 1940’s England.  It follows investigative journalist and author Juliet Ashton (James) and the prevalent theme in the movie is how people deal with losses that occur during war.

Dial Press published the novel that the film is based on in 2008.  Mary Ann Shaffer originated the story after conducting research for a biography in England.  Upon her death, Shaffer’s niece, Annie Barrows finished the manuscript.

Producers began work on the adaptation in 2010 with a plan to start filming in 2012.  Five years, and numerous cast changes later, filming commenced from a screenplay by Kevin Hood, Don Roos, and Tom Bezucha.  The combined efforts of StudioCanal, Blueprint Pictures and the Mazur/Caplan Company made it happen. 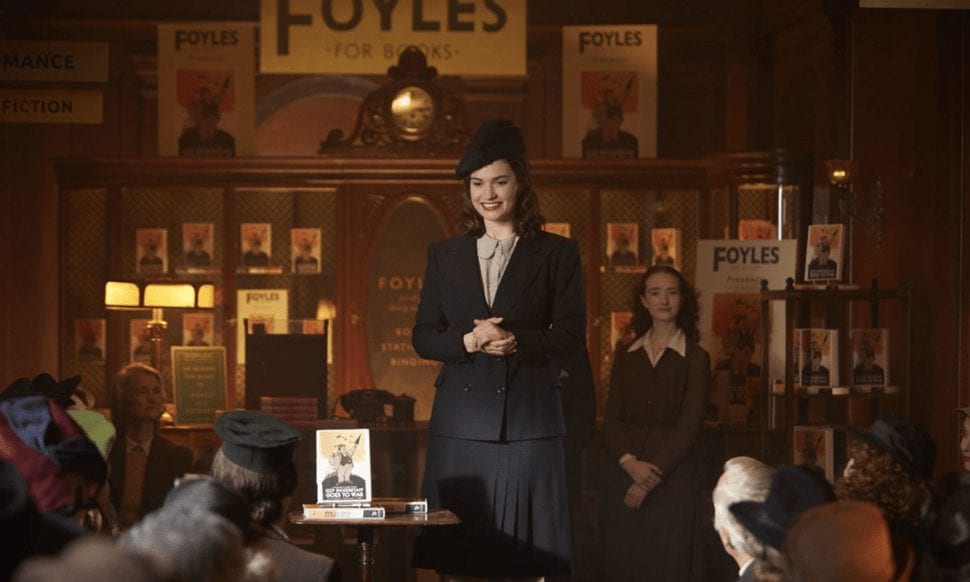 It’s Based on a Book

I wish I had read the novel.  That’s because I enjoy them, and they often offer much more than what films can.  I get flustered at times by the choices screenwriters make when they adapt novels.  Often what they do is arbitrary, and I wonder sometimes if it might be little more than an attempt to justify the fee for service.  I think when the source material is strong, the potential for a good movie is high.  But if the writer doesn’t recognize what makes the prose special, and leaves that out, what chance does the picture have then?  Perhaps that’s what happened with The Guernsey Literary and Potato Peel Pie Society.

The novel is a series of letters, correspondence between Juliet Ashton and Dawsey Adams (Huisman), a local Guernsey farmer and member of the Society.  Guernsey is an Island in the English Channel that Nazi Germany occupied during the war.  Ashton lives in London.  Watching the movie, you see very little attention paid to the letters between them.  I assumed there were only a few.  Now I wonder what was lost in the transition from the novel to the film since the bulk of the novel was in the letters. 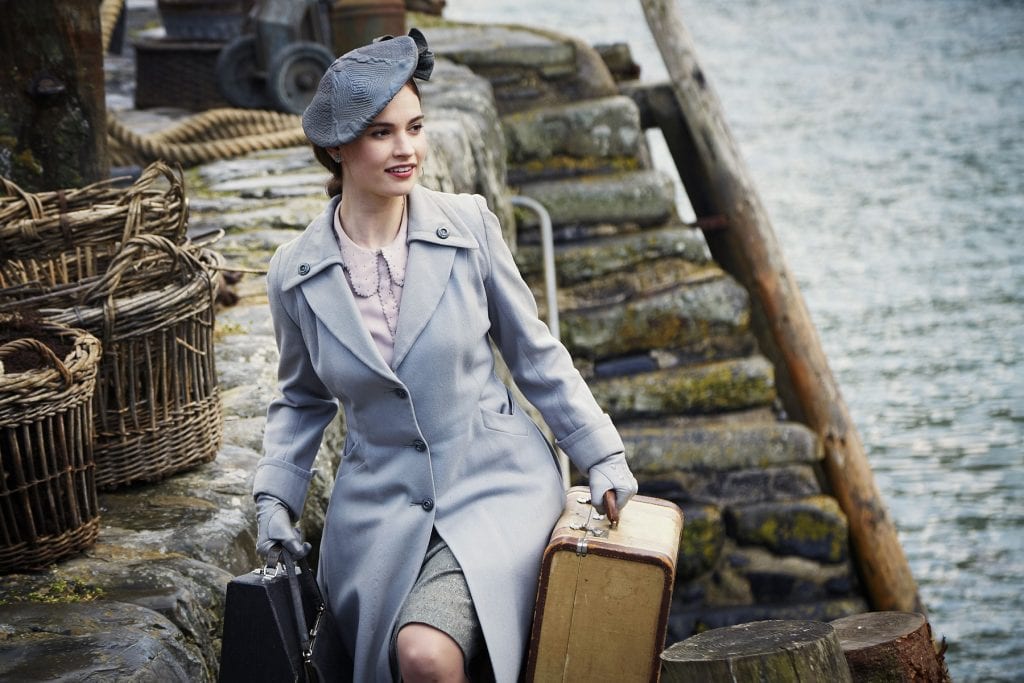 The Island of Guernsey

Newell filmed on the island and with good reason.  The scenes overflow with charm and have an enchanting quality.  It is a beautiful country with a challenging past.  Through flashbacks Society members Isola Pribby (Parkinson), Eben Ramsey (Courtenay), Amelia Maugery (Wilton) and Adams reveal some of the hardships brought on by German occupation.  However, they gave very little of the details, which I imagine the novel provided.

Each of the Society members is unique and appealing.  I credit this to the acting performances.  I wanted to get to know them more after spending time visiting one of the Society meetings.  However, the script focused too much on Ashton and her interactions with her American friend, Mark Reynolds (Powell) and her publisher (Goode), that really did not make for enjoyable viewing.

This gets to one of the principle problems for the movie.  There were too many stories.  We end up without one good one to appreciate.  Remember, three people wrote the screenplay.  One movie was about Guernsey and the Society.  Then story two was about Ashton, her writing career and friendship with her publisher.  Finally, story three was about Ashton and her romantic relationships.  Since the movie is only two hours long, you see how it just ran out of time, not leaving enough to treat any of them with the emphasis they deserved. 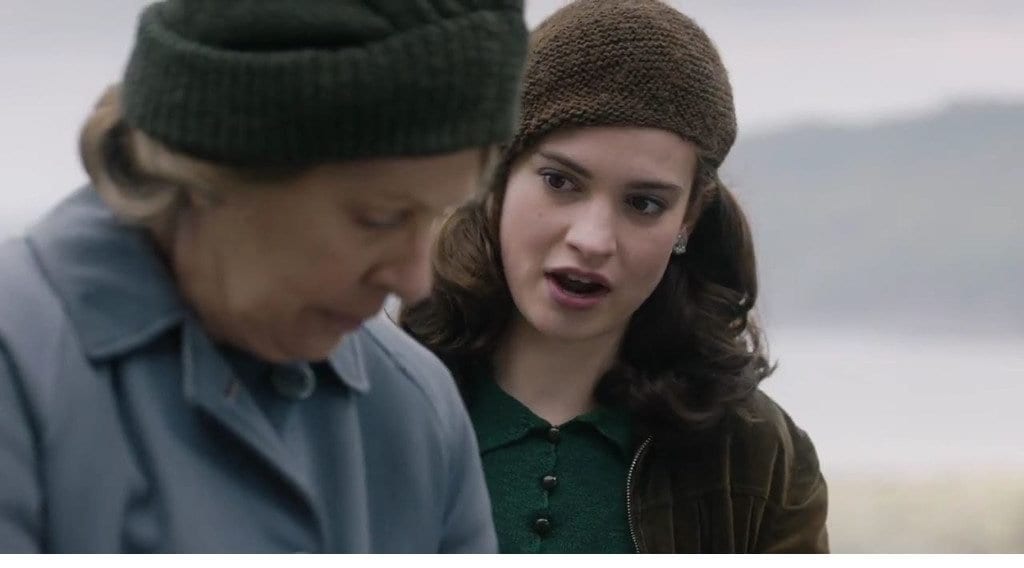 In the movie we clearly see Ashton is struggling with her career and the impact the war had on her.  She sees a trip to Guernsey to research an article as away to collect herself and figure things out.  This is well worth watching.  I enjoyed it because Lily James gave such a strong performance.  She proved her acting ability in Darkest Hour (2017), holding her own opposite Gary Oldman and his Oscar-winning performance as Winston Churchill.

Here is where the story runs into trouble.  As Ashton learns more about the Society and the history of Guernsey, we get to also.  Instead of providing the pay off expected, the story drifts back to Ashton’s publisher who has another agenda.  But before Ashton resolves that her friend Reynolds interrupts.  The audience is left trying to figure out what happened.

The movie has a fascinating title. It’s adorable.  And so is the Society.  They actually met and read books, discussing them ’til all hours of the night.  What fun.  That was a connection they had with Juliet Ashton, she was an author they identified with.  And they enjoyed her type of prose.  This made for a genuine link between her, the Society, and in particular, its members.

This is also where the theme of the movie is most influential.  Here you have a community which has literally been captured by an invading army.  There’s a scene of victorious soldiers parading through the streets that captures this fabulously.  Consequently, you learn the trauma caused by such an event.  How?  Imagine being occupied for years under wartime conditions.  The result is that you feel for each person as he or she attempts to return to normalcy, to lead a happy life.  Is it even possible?

If the movie had just focused on that story it would have been a much better product.  Instead it tried to be romantic, a choice that is hard to understand.  Again, each of the actors deserves credit here.  Michiel Huisman is someone I enjoyed seeing in smaller parts in Wild (2014) and The Age of Adaline (2015).  I appreciate seeing him perform well in a much larger role.  Penelope Wilson reminded me of why I enjoyed her so much in the Best Exotic Marigold Hotel (2012) and the sequel.  Katherine Parkinson I did not know before, but now I hope to see much more of her, she really captures your attention with her engaging onscreen presence. 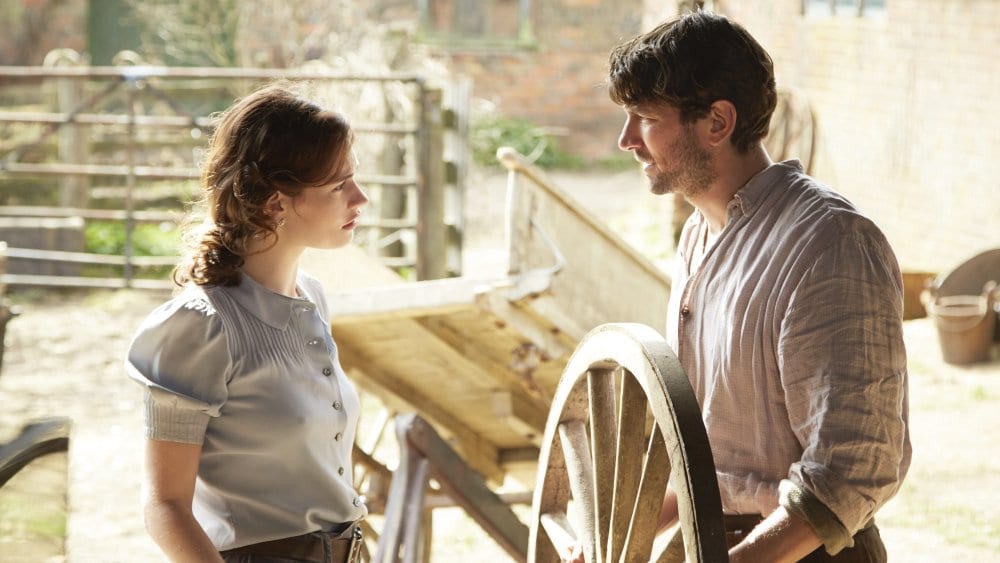 If you are fans of the actors in this movie you will find them a joy to watch as they give very fine performances.  However, the story just does not deliver.  It doesn’t rise to the level of effort the actors gave.  They present as serious people who seek thoughtful solutions to the mature challenges facing them.  So the romantic twist to how they behave doesn’t make sense.  The story should have been better.  It could have been, and perhaps would have been, if it had followed the plot of the novel.  If fans of the book are disappointed, at least they have the novel to fall back on.

Thank you for reading! What did you think about The Guernsey Literary and Potato Peel Pie Society? Comment down below!

I thought the movie was excellent, not a “miss” in my book at all.

I just watched the movie over the weekend and had finished reading the book only days before. There may be spoilers in my comments. To your point about the book being largely correspondence – it was completely correspondence and did a good job of moving the story forward in spite of that. I thought that commendable. There was much more correspondence between Juliet and Dawsey before she arrived in Guernsey. I will refer to the book here. There was a lot of correspondence between Juliet and Sydney (her publisher and friend). It explained their relationship and also included much correspondence between Sydney’s sister, Juliet’s best friend, and Juliet. Sydney’s secretary had a minor role but a huge part in a subplot which I found most interesting. I was sorry that was left out of the movie. The Mark relationship was more mentioned in the book than in the movie (there was a lot more time before Guernsey in the book) and offered better explanations as to the failing of it. There was a wonderful relationship that took a little time to develop between Juliet and Kit in the book and there were a lot more references to Kit’s mother (name escapes me). The parallel life of her and Juliet was mildly interesting. As I neared the end of the book, I was ready for it to end. I had figured out the ending, which is not unusual in a romance. The thing that was left out, which involved the secretary, was one of the more interesting parts of the book. I suppose you can’t include everything. It could have handled its own subplot line though. That being said, I gave the book 3 stars and I enjoyed the movie, too. I cannot speak to how I would have felt about it if I had not read the book. Watching the film’s location and the fine acting was a plus.

Great book. Meh for the movie

I really only wanna see this film to satisfy my Anglophile-ness by seeing all these great British acting icons acting together.

I am glad I saw it. I found the actors to be terrific!

It would have been a much better product.